We’re going to take a look a work-style wallet that’s a little different from the usual fair today – this one made by Lee at Rushton Leather, inspired by ‘Russia Red’ gentlemen’s shoes! 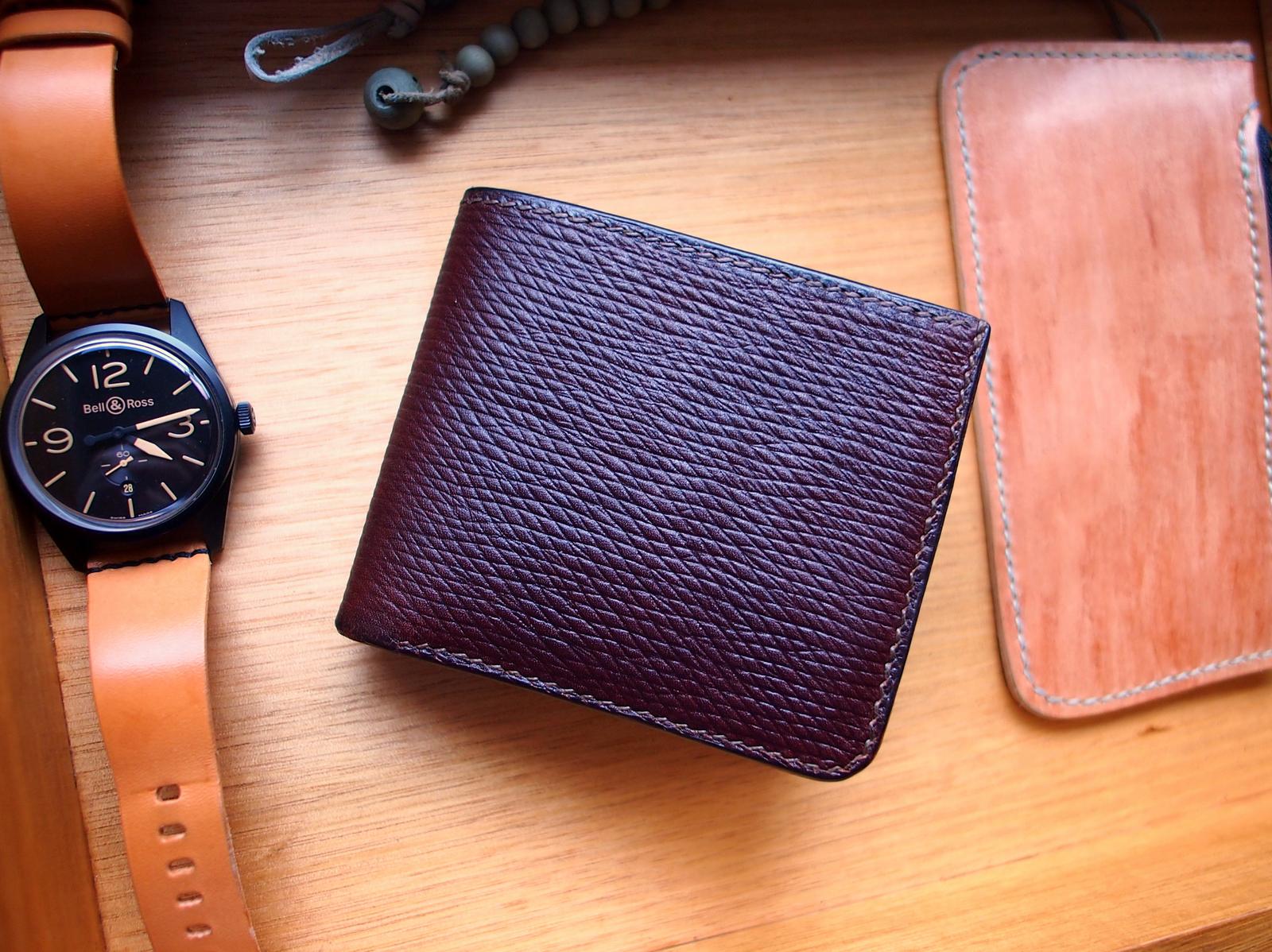 Lee is relatively new to the custom leather goods scene, but his leather crafting skills have been honed through his employment in the British shoe-making industry. This particular wallet, a test piece, showcases not only the very special Russia Kip reproduction leather from Baker’s tannery, but also styling details borrowed from British footwear and early 20th century English military gear. 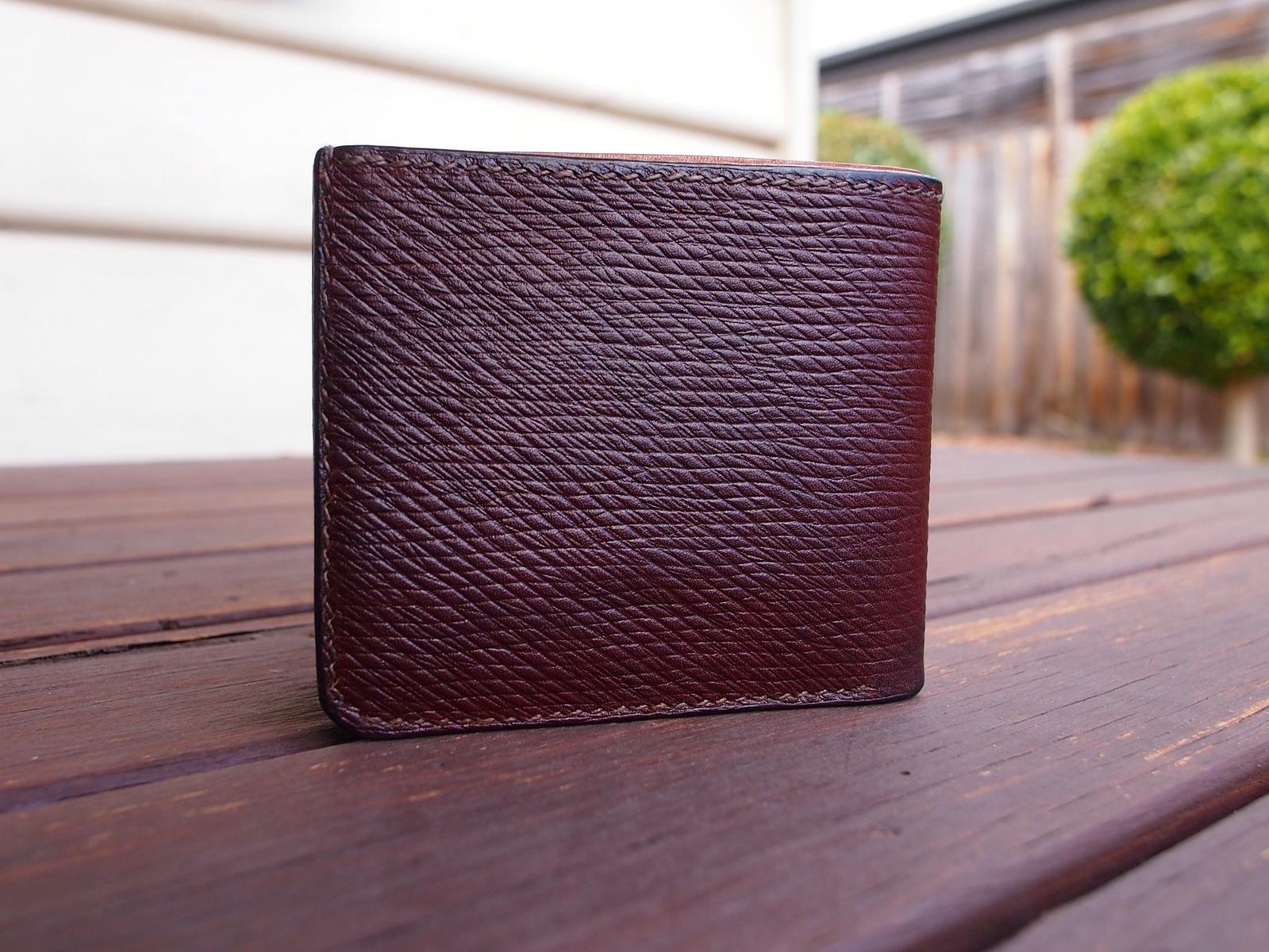 We’ll cover a bit more of the back story about the inspirations behind this wallet as we go. Let’s take a look at this very interesting billfold.

The layout of this wallet is that of a basic 6 card billfold.

Unlike many work-style billfolds showcased on this blog, Lee’s version is not exaggerated in size and has a more minimalist layering. Indeed, this wallet is styled after British country shoes (think Tricker’s, Alfred Sargent, etc) and also English military wares, so the detailing is more refined and classic compared with Americana styles of work leathers. 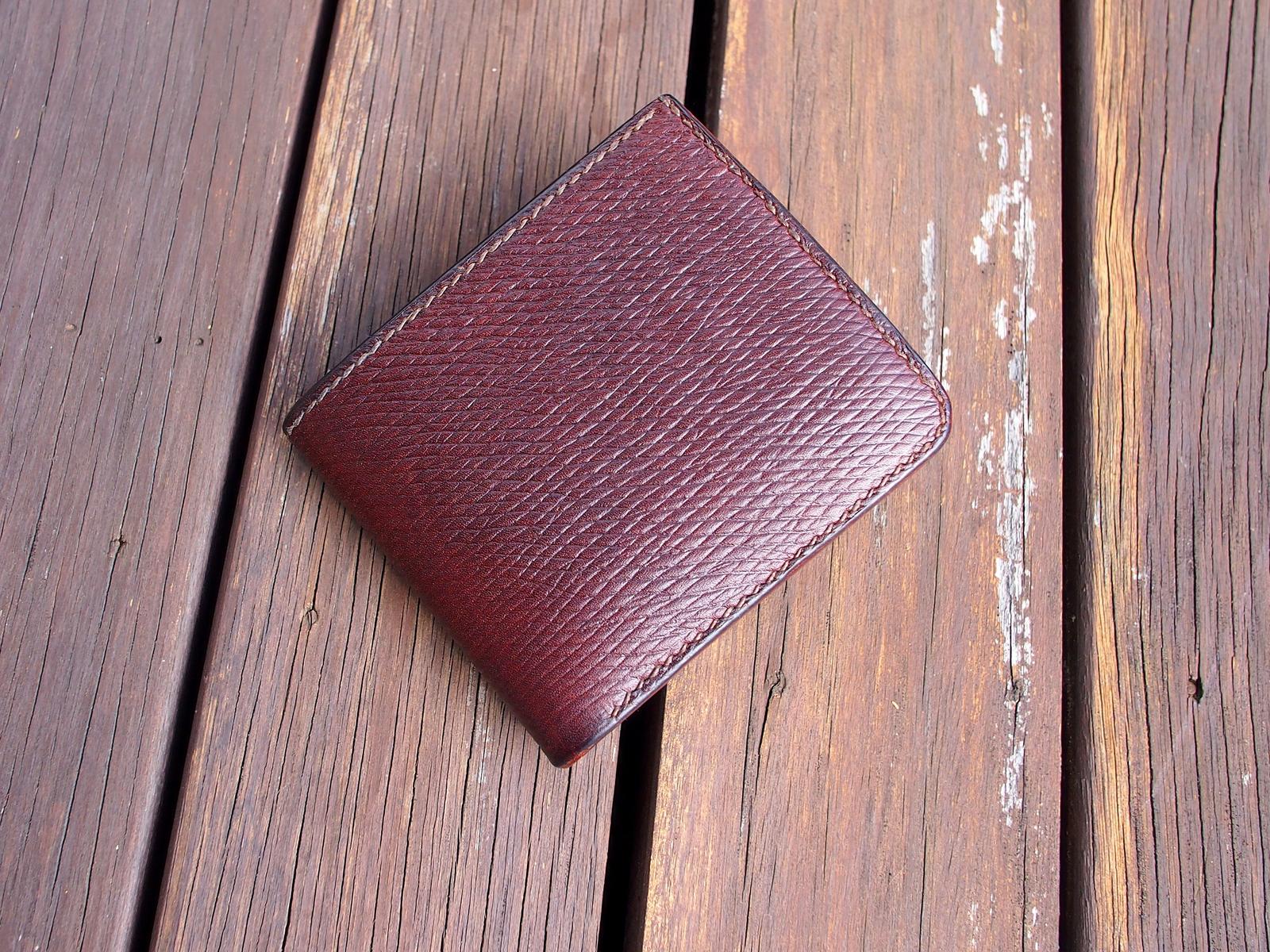 This is a very easy size to handle with one hand. 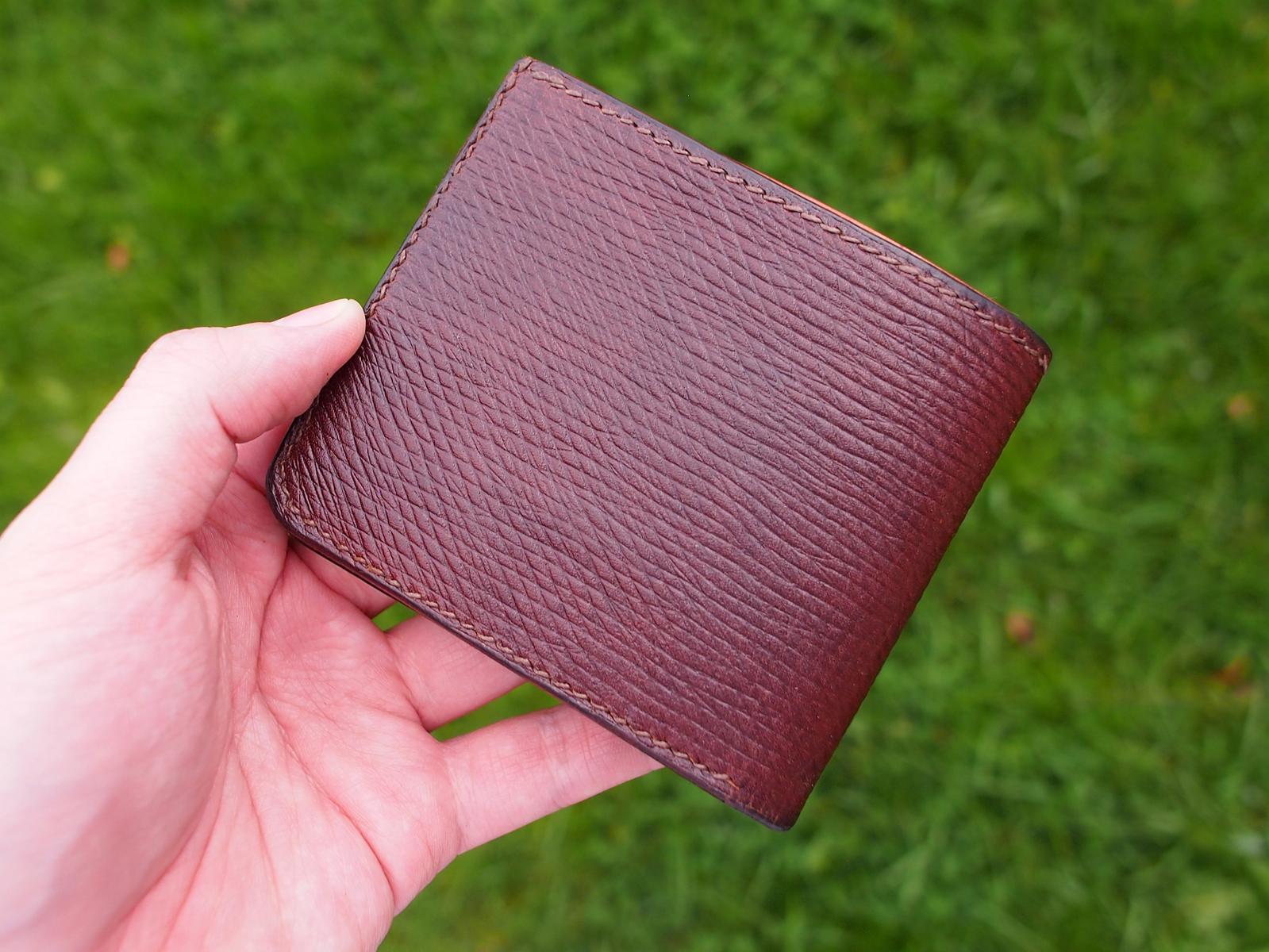 The shape is not a rectangle however, as Lee has rounded the bottom corners to add some contrast to the overall appearance. 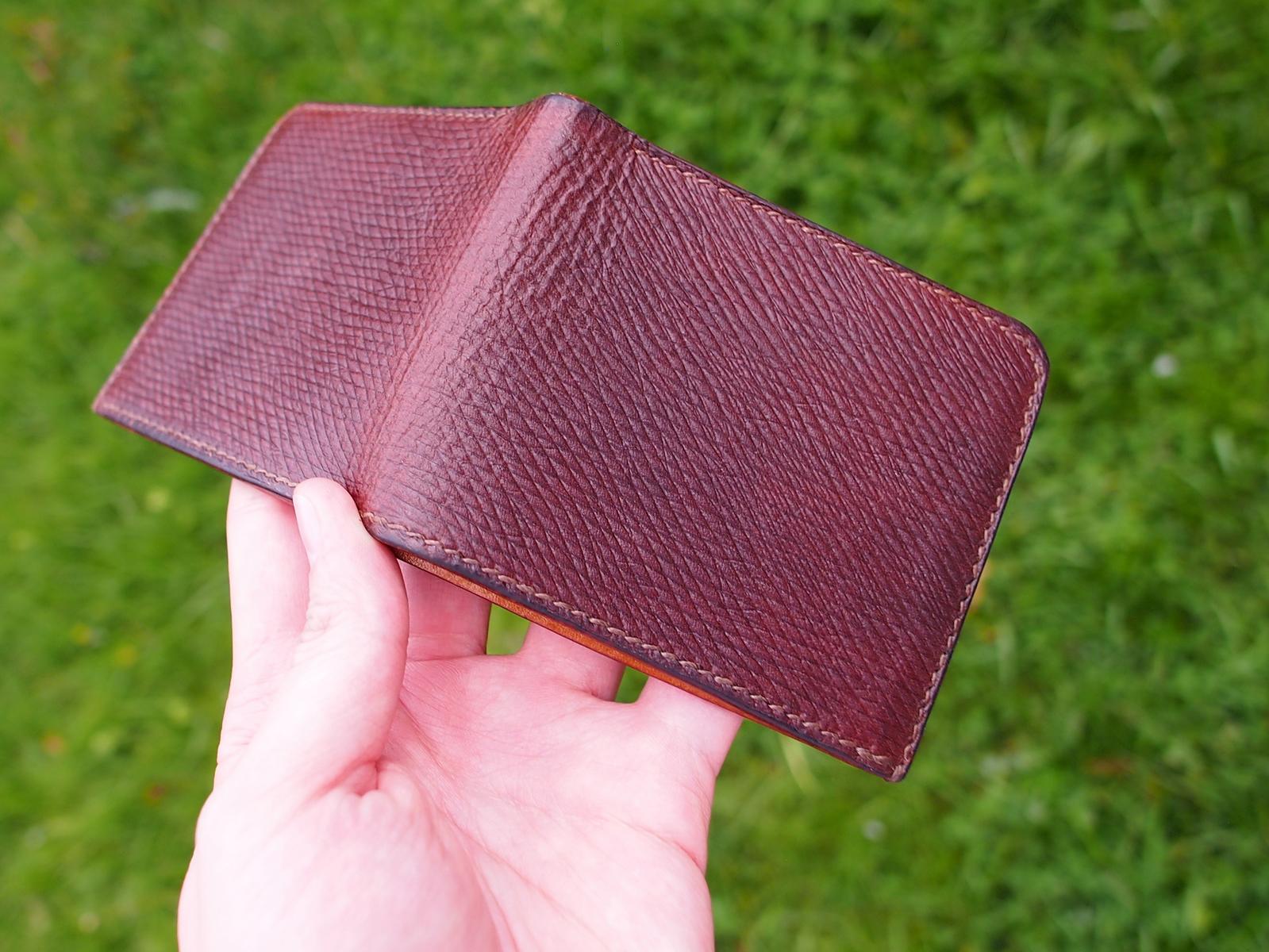 All up there are 7 layers of leather, creating one notes compartment and six card slots in total. There are no additional storage compartments, though each card slot is capable of holding two cards easily. 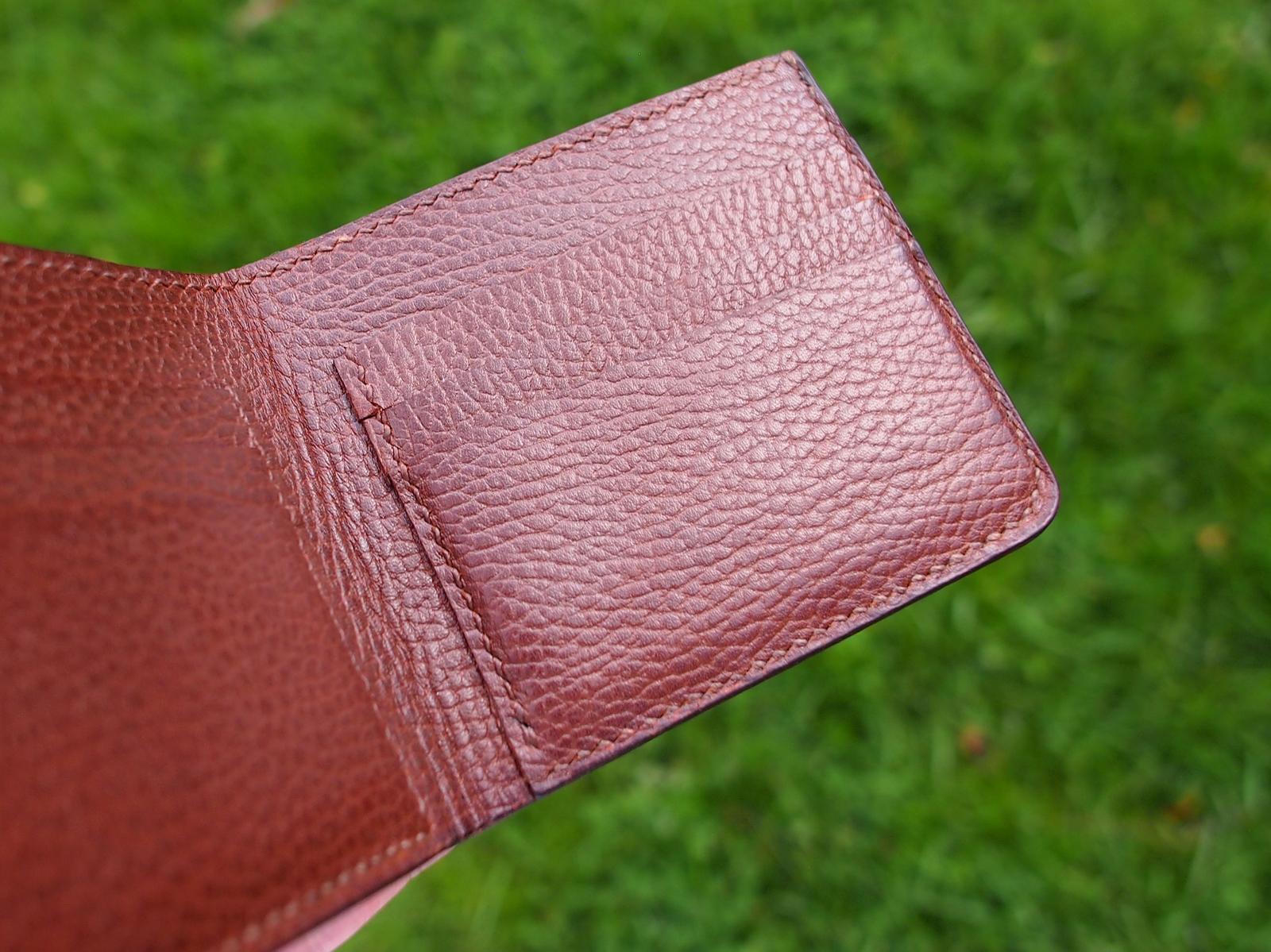 The layout is symmetrical, with three slots per side. 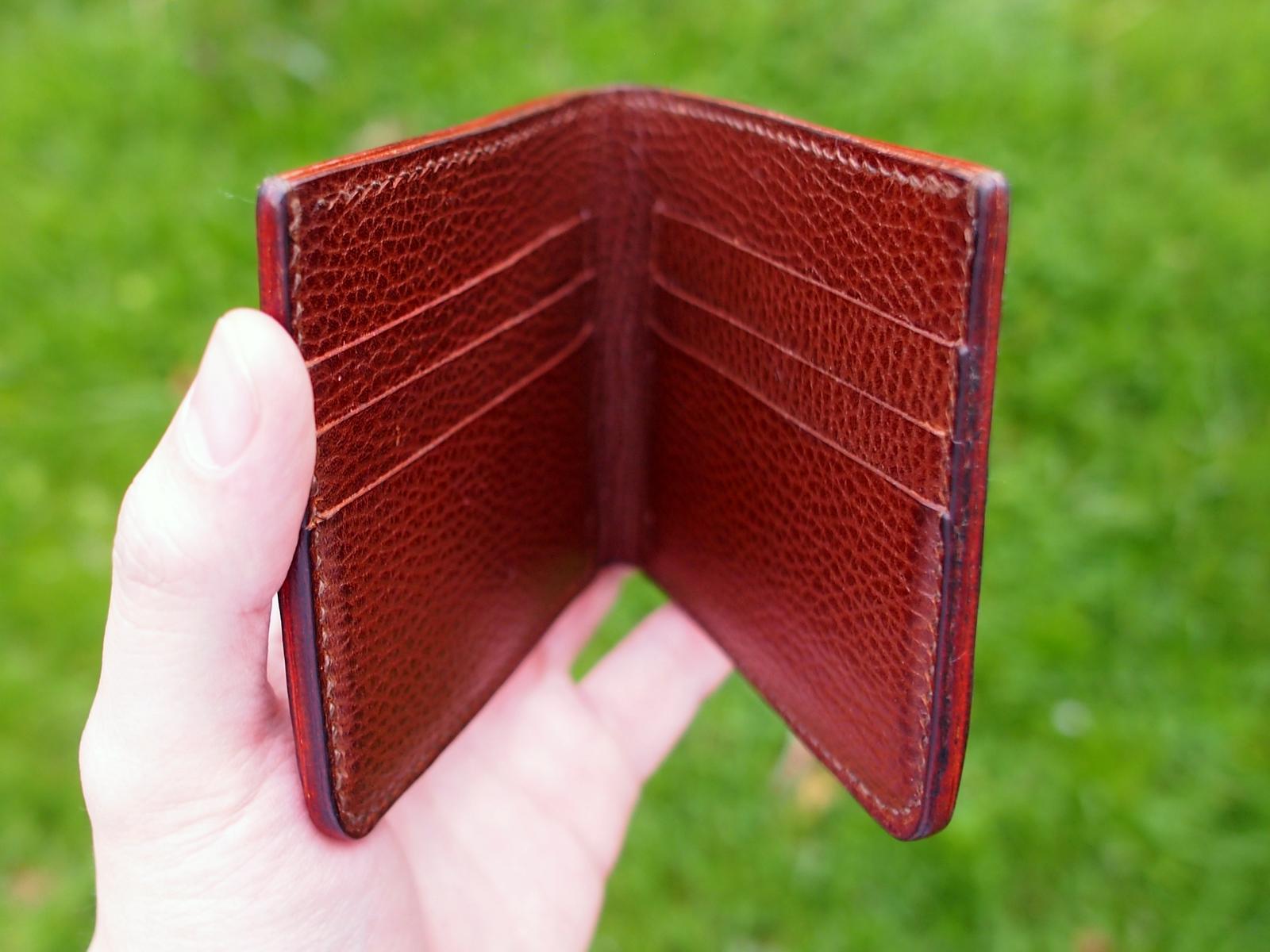 The wallet measures 1.5 cm in thickness when folded.

The thickness has been minimised by foregoing the hidden compartments, giving the wallet additional sleekness. 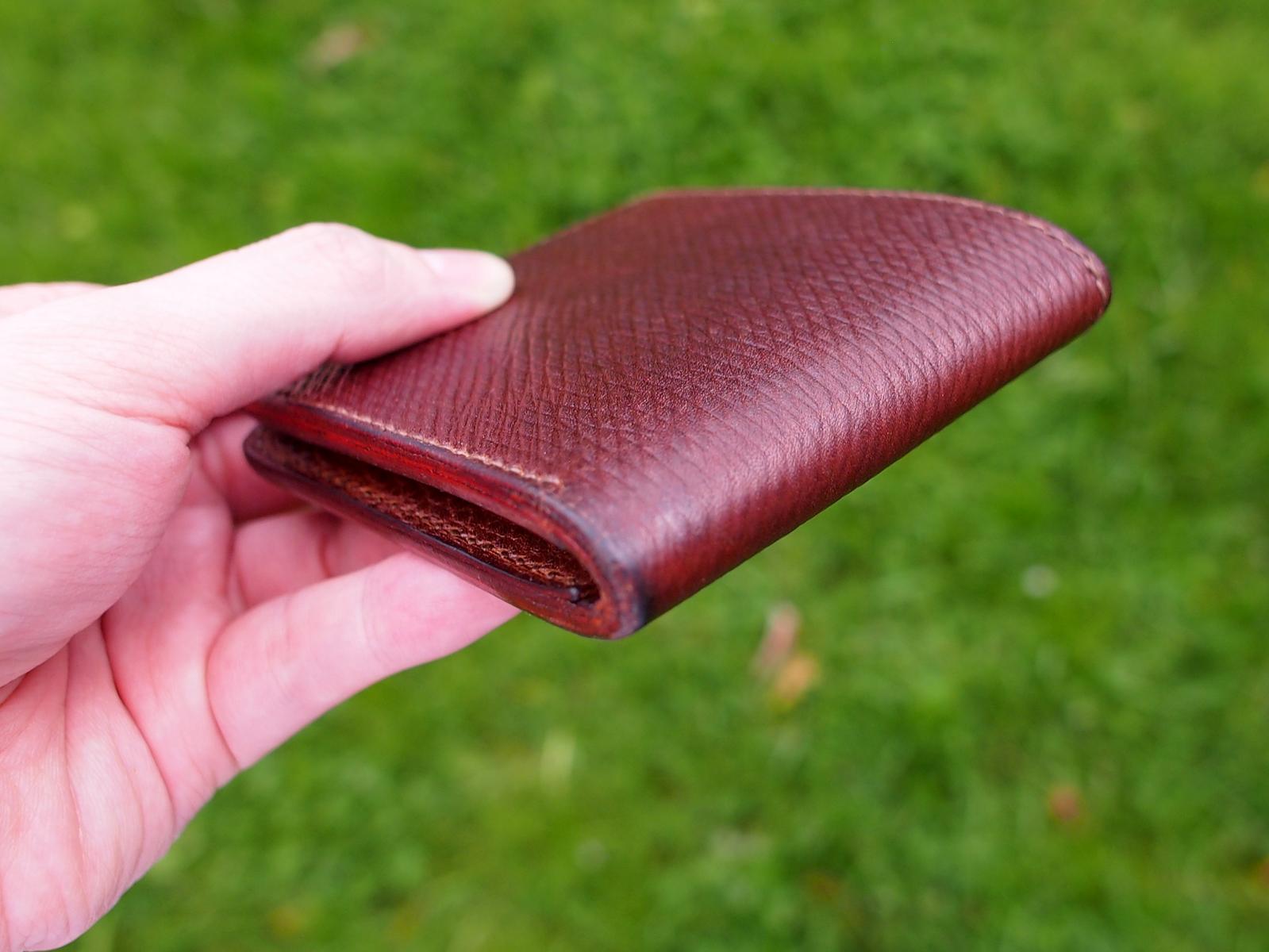 This is a medium sized billfold, as you can tell by the measurements given earlier, and thus it fits easily into any jeans pockets. 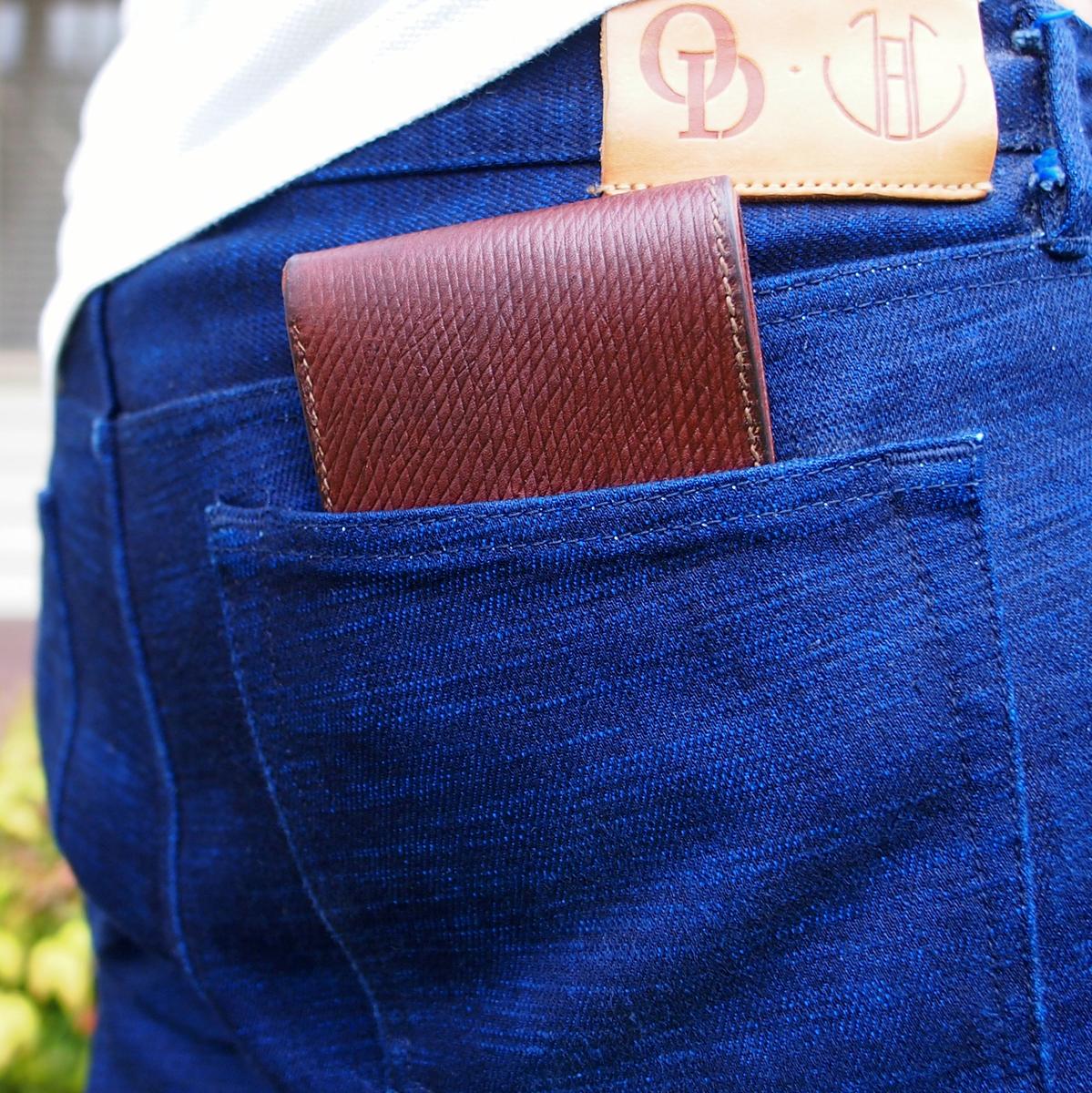 All in all, this wallet is a medium sized billfold and features a simple but usable layout. This British detailing is smoother and more subtle compared with Americana styles of leather goods.

Some centuries ago, there had been a well known leather manufactured in Russia – variously called Russia Red or Russian calf or Russian Reindeer – this leather had been made of cattlehide, slowly tanned (by modern standards) and stuffed full of birch oils & animal fats for added resistance towards water. The leather was often then finished by dyeing the grain red with a natural dye and artificially printing its surface (much like modern Scotch grain leather), imparting additional grain toughness. Apparently this leather was mainly used for fine work, such as bookbinding, upholstery and carry goods.

The method of manufacture for this Russian leather has been lost to the ages, and never fully reproduced despite many attempts over hundreds of years. Yet in 1972 many cargo boxes of Russia Red leather were salvaged by divers off the English coast. These containers were originally the cargo of the Metta Catherina, which sunk in 1786. 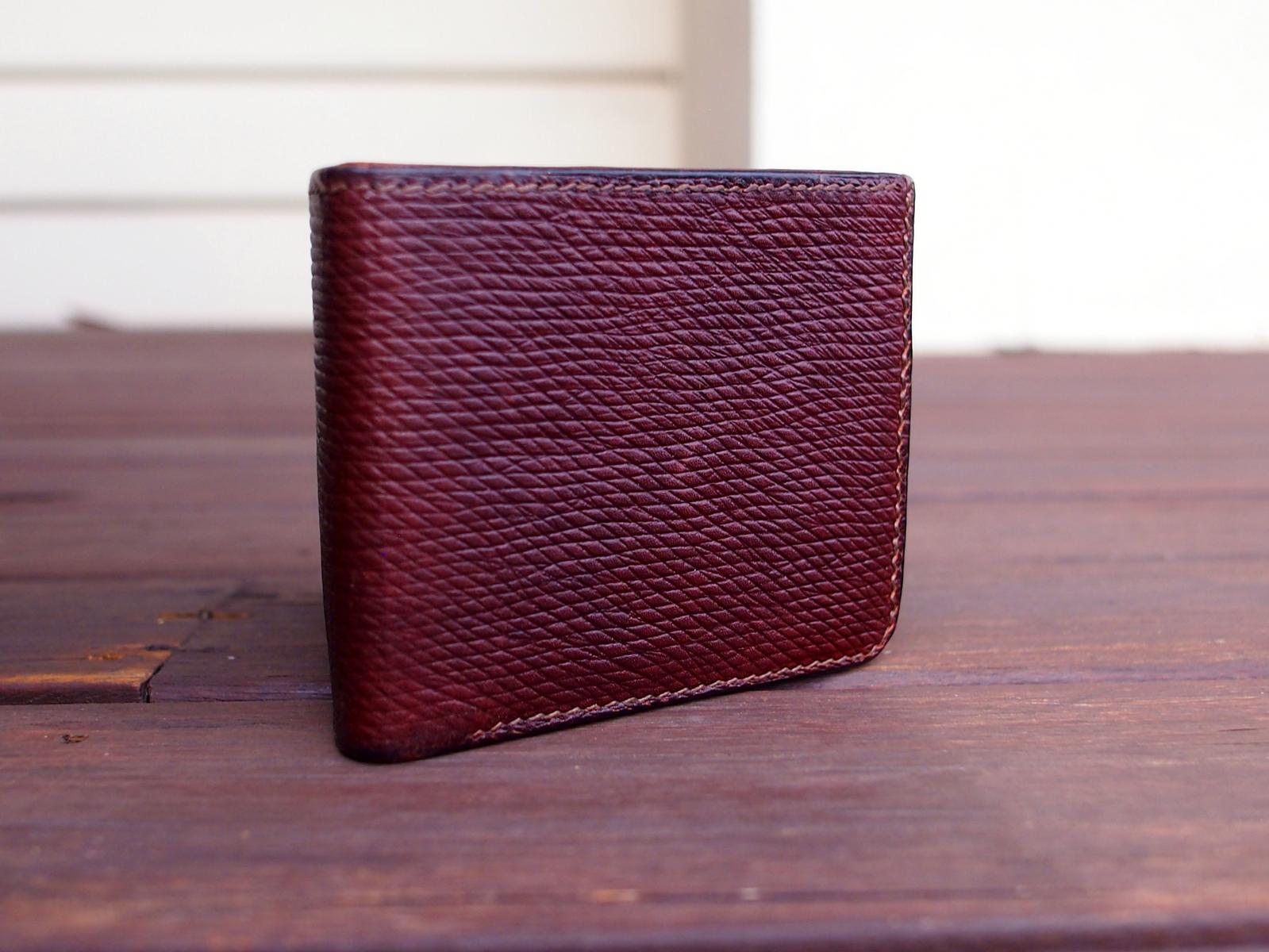 It is impossible to say what Russia Red leathers had looked, felt and smelt liked originally. Even with the 1972 discovery of the ‘New Old Stock’ leathers, they were but one variation of the leather – which has had history spanning hundreds of years – and it is impossible to accurately determine the effects of 200-odd years of deep sea storage.

Nevertheless, the discovery sparked renewed interest in the leather and further attempts at reproducing it. Baker’s tannery perhaps has the best reproduction, showcased here, by virtue of maintaining the slow bark tannage that would have been the modus operandi of the majority of leather tanning up until the industrialisation of leather production. 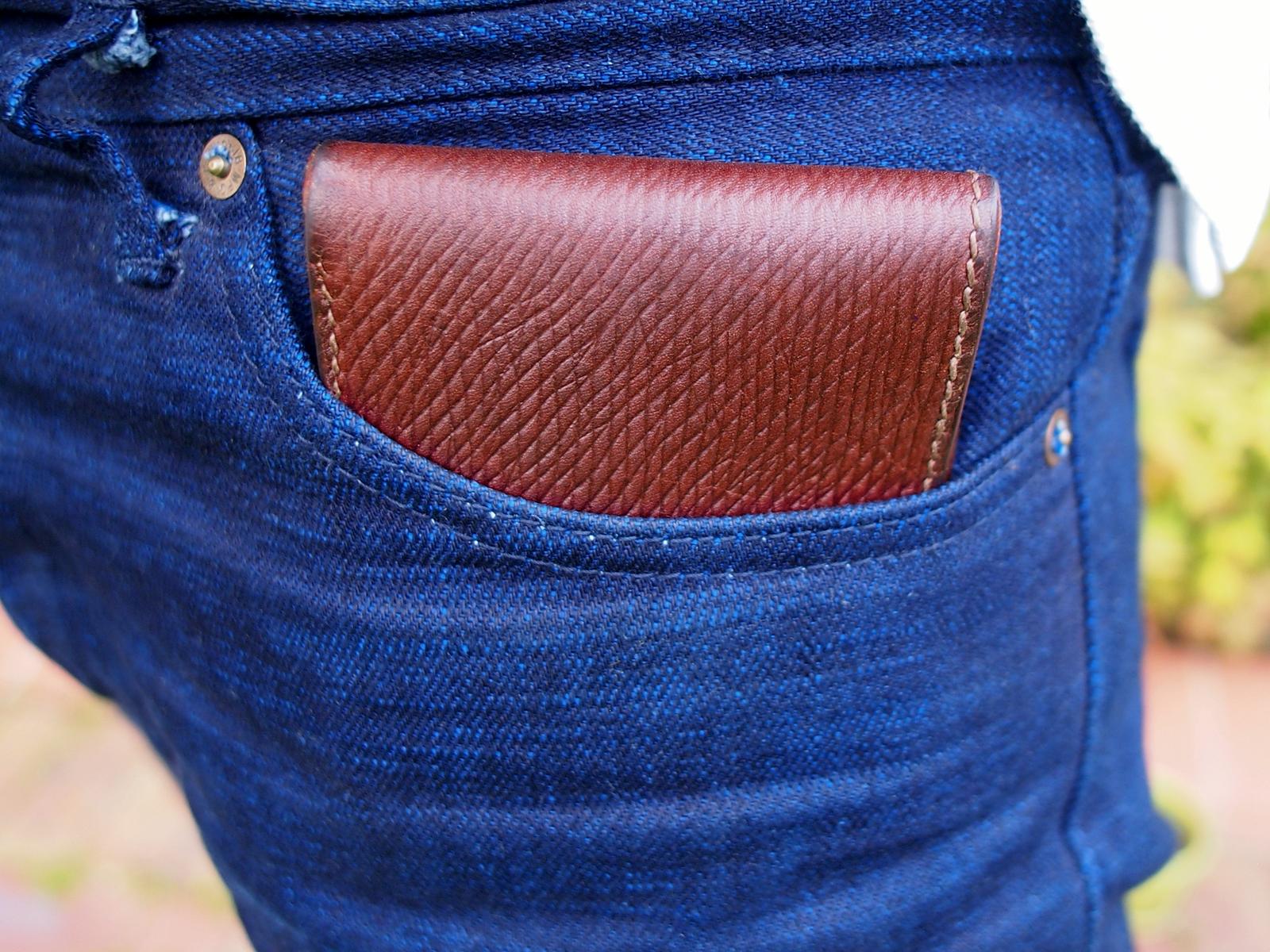 The hide comes from kip – an adolescent cow. Birch & Oak bark from England and Willow bark from France provide the tannins, slowly transforming hide into leather over 12 months. The leather is then dressed with fats, waxes and Birch oil. The diamond/hatchet print is then applied to the grain to give the texture you see here.

I’m not sure about the dye/dyes used here. 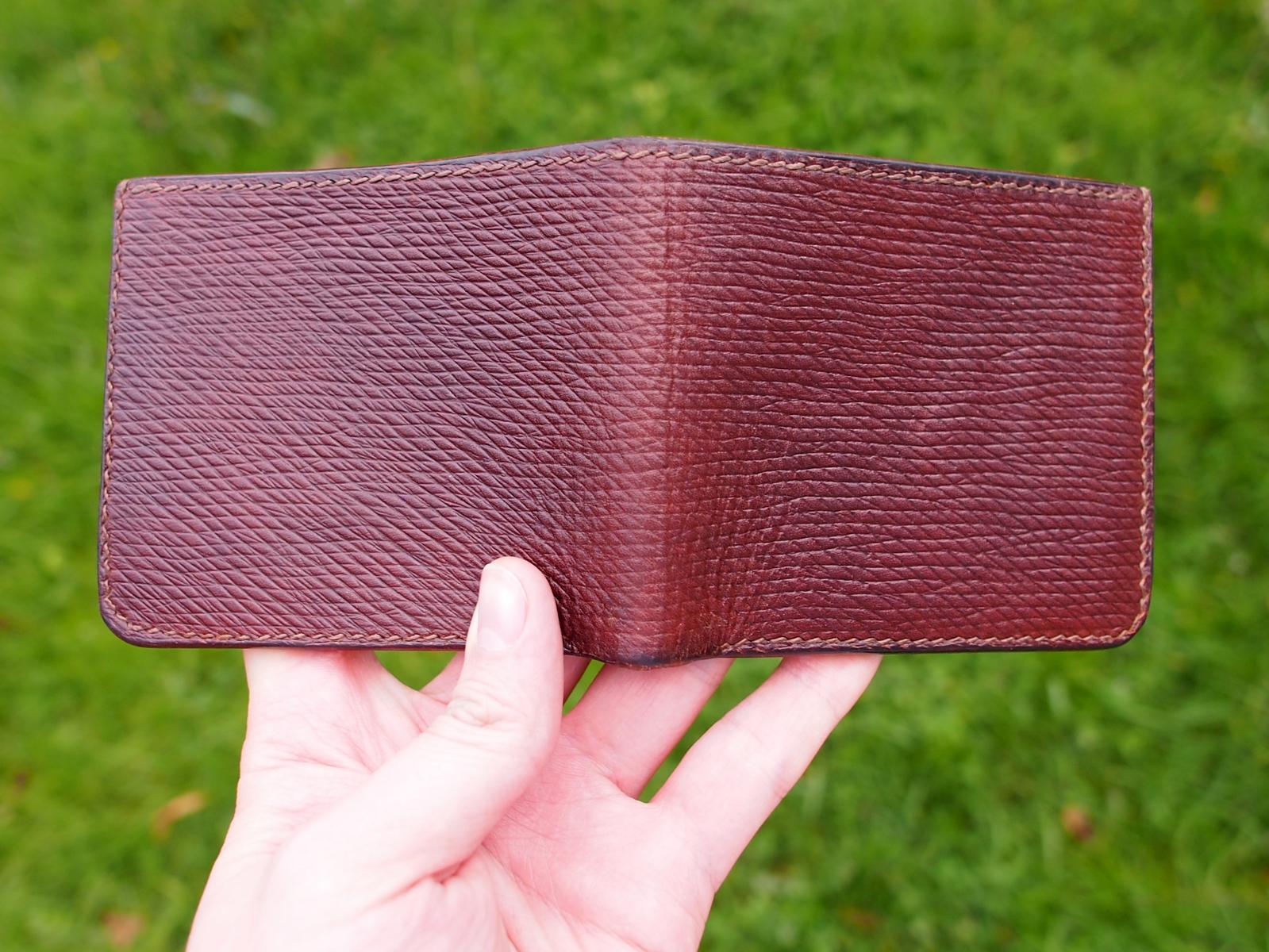 I cannot comment as to the accuracy of the reproduction, but I can say that this is a very fine and superbly interesting leather!

The aroma of birch and oak is apparent – more mellow than the 100% oak bark tanned leather from the same tannery, but very strong nevertheless, permeating the entire room. 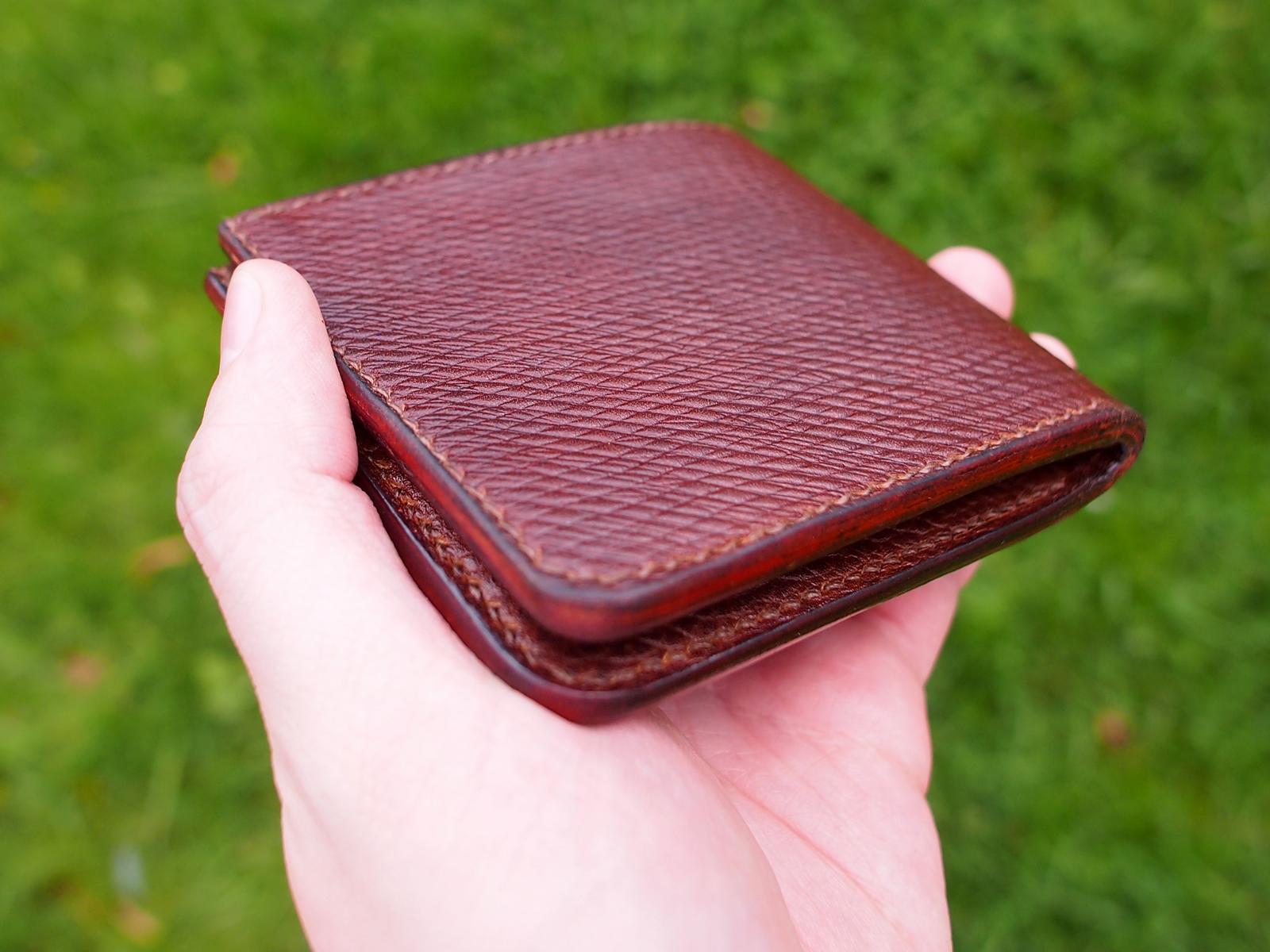 The textured grain surface has a moderate degree of shine. Even with the artificial print, the pore structure remains evident on closer examination. The reddish brown tone is deep and layered – there is gentle variegation in the colour, resulting from a pull-up effect.

The hand feel is much more organic and lively compared with most other printed leathers. The grain is very water and scratch resistant, as advertised.

Curiosity aside, this Russia kip leather from Baker’s is extremely high quality, and truly old world…much more so than the various re-tanned leathers that are being marketed as ‘heritage’ nowadays. 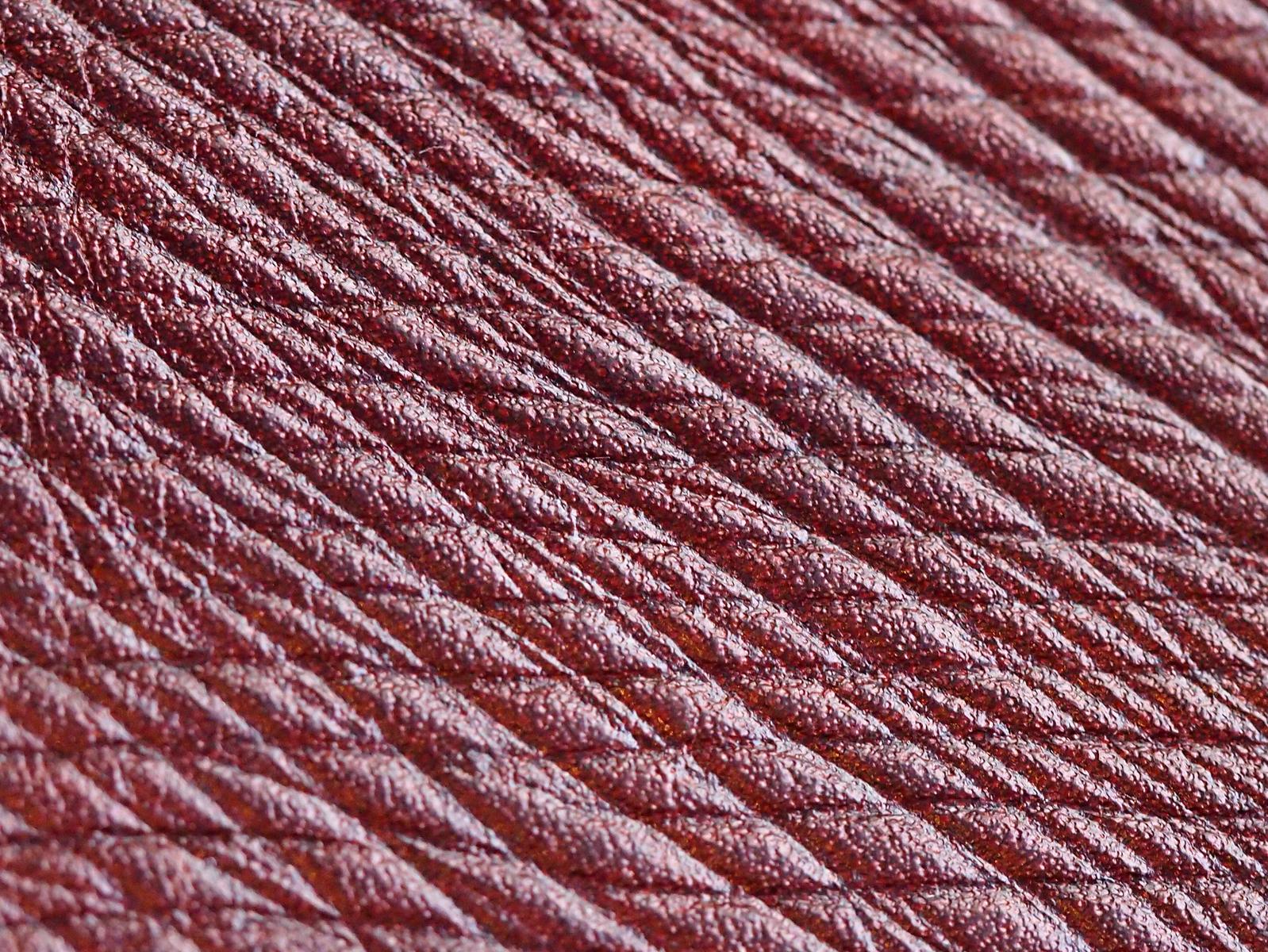 The lining and inner are made of ‘Hermes’ leathers.

Tannerie d’Annonay’s Vegano calf leather is used for the lining – you will have seen darker coloured versions of this leather used for higher end English shoes – featuring an very supple aniline finish and a smooth, slightly waxy feel. This French calfskin is one of the nicest vegetable tanned calf leathers in the world.

It is interesting to note that Horween is currently trying to reproduce this type of veg tanned calf, after discontinuing calf production some decades ago. 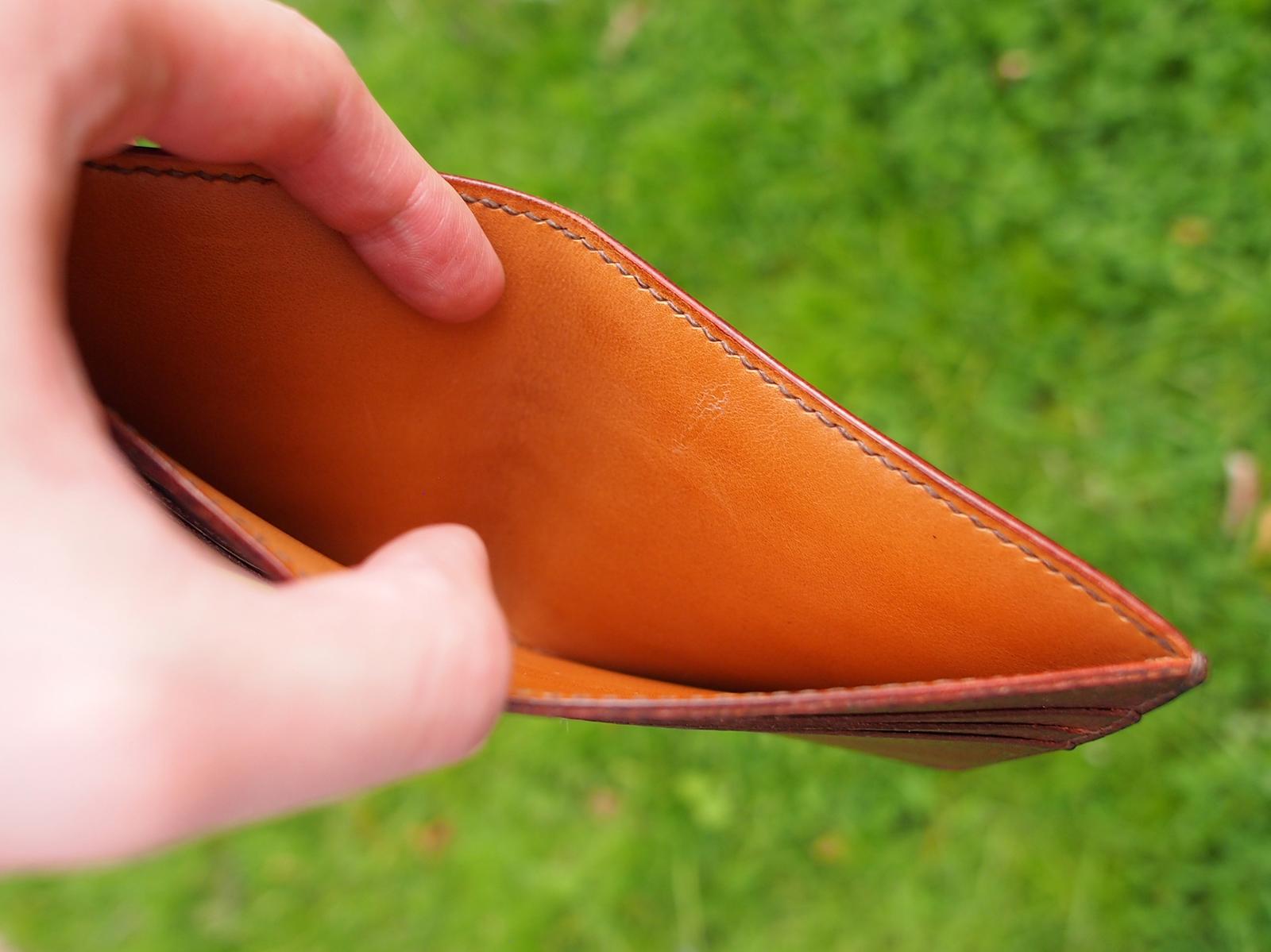 Another French calf leather, this time the country grain calf from Tanneries Du Puy, is used for the inner. This is another popular leather among high end English shoes makers, though Tanneries Du Puy’s grained calfskin is quite well known among various sectors of the fashion community in general.

This is a very fine leather, nicely grained, supple and somewhat waxy…..though not nearly as dense as Baker’s Russian kip. 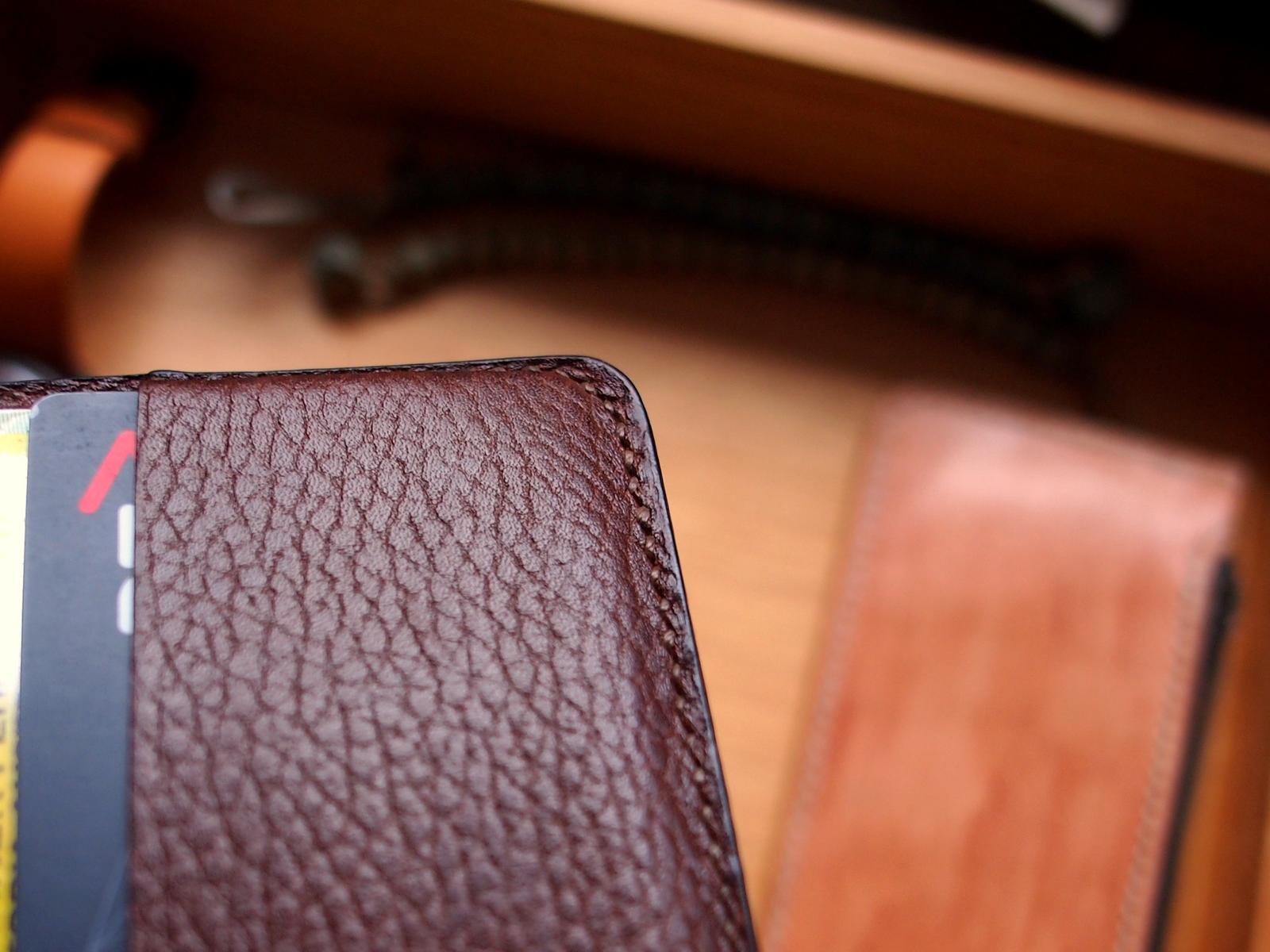 As previously hinted, Hermes had purchased Tannerie d’Annonay in 2013 and Tanneries Du Puy in 2015. The trend of fashion powerhouses acquiring Italian and French tanneries is an interesting one to explore.

This wallet is entirely hand-made, everything from the cutting to the stitching. Lee’s time crafting fine English shoes in Northamptonshire has resulted in a style of hand-craft that is rather unique in a market which is dominated by either British saddlery styles or Americana. 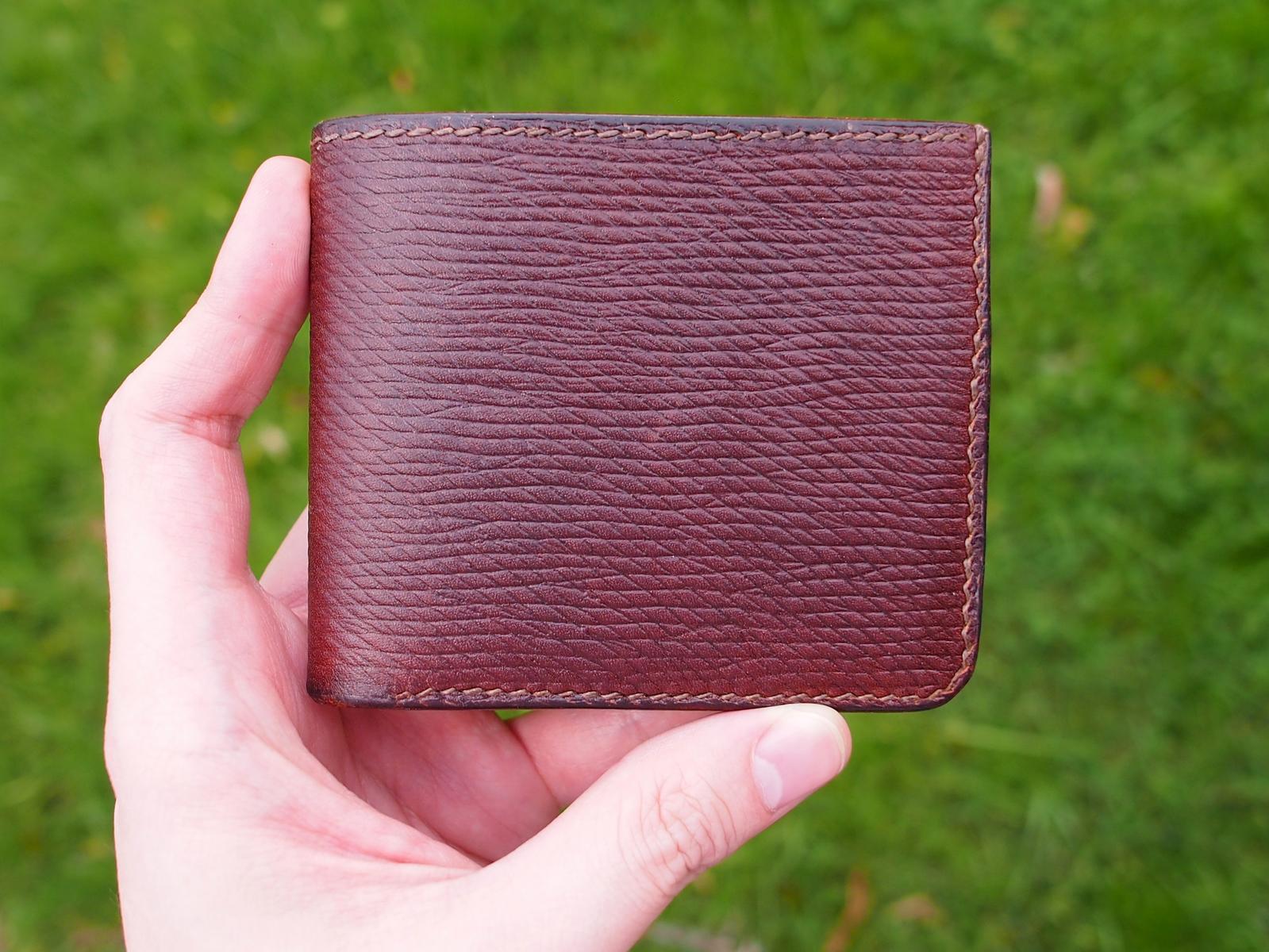 The cutting and panel matching on this wallet are nicely done.

The outshell had a consistent shape throughout, and the inner panels were symmetrical across the two sides. 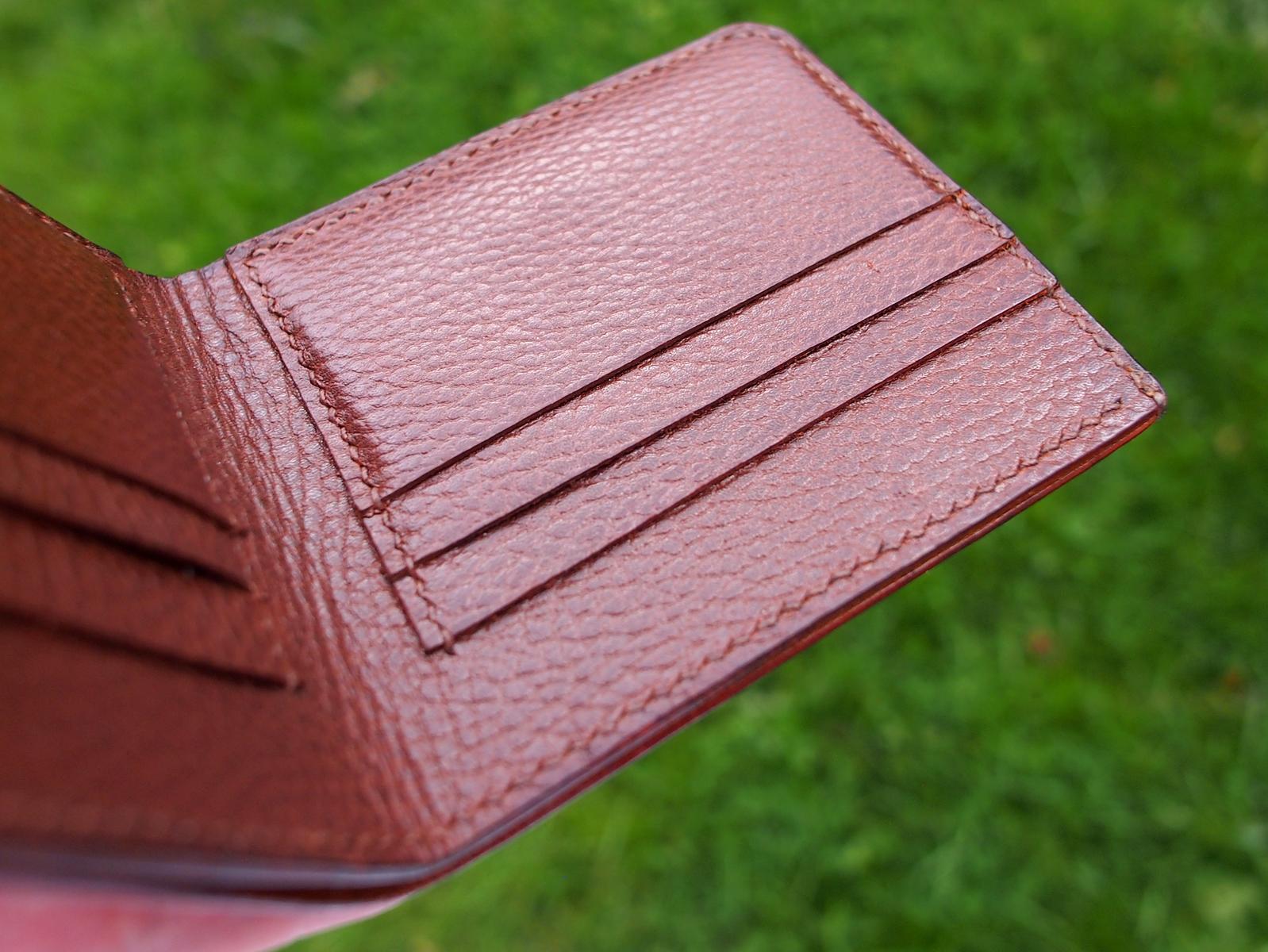 The inner did slightly over-lap the outshell over a segment along the upper edge (you can see this in the first photo of this post), but apart from that there are no errors. 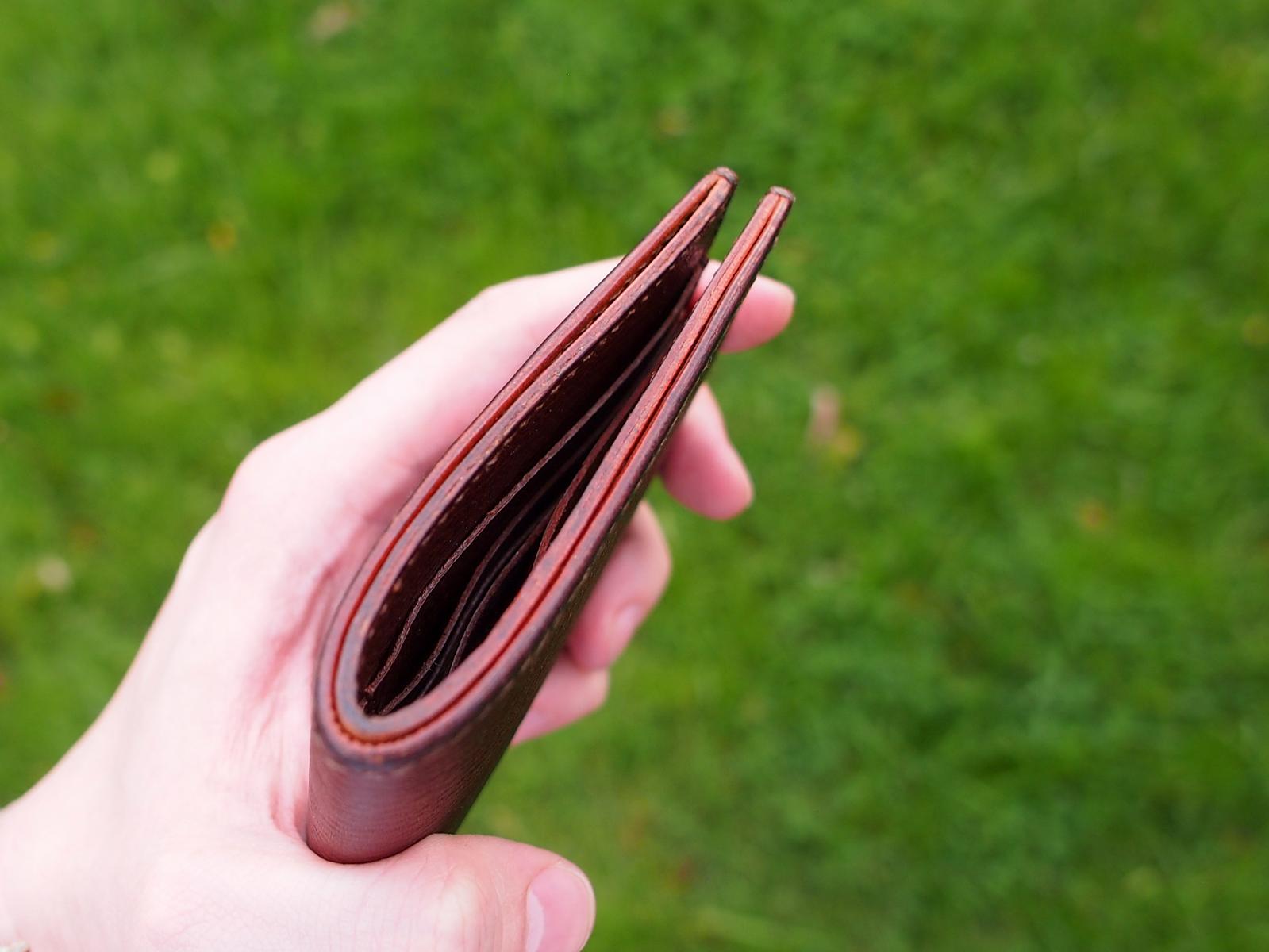 The individual panels had all the edges neatly finished.

The edge finishing is well done – nicely rounded and wax burnished. The transparent wax burnishing allows the visualisation of the leather colours and layers – one of the hallmarks of work-style leathers. 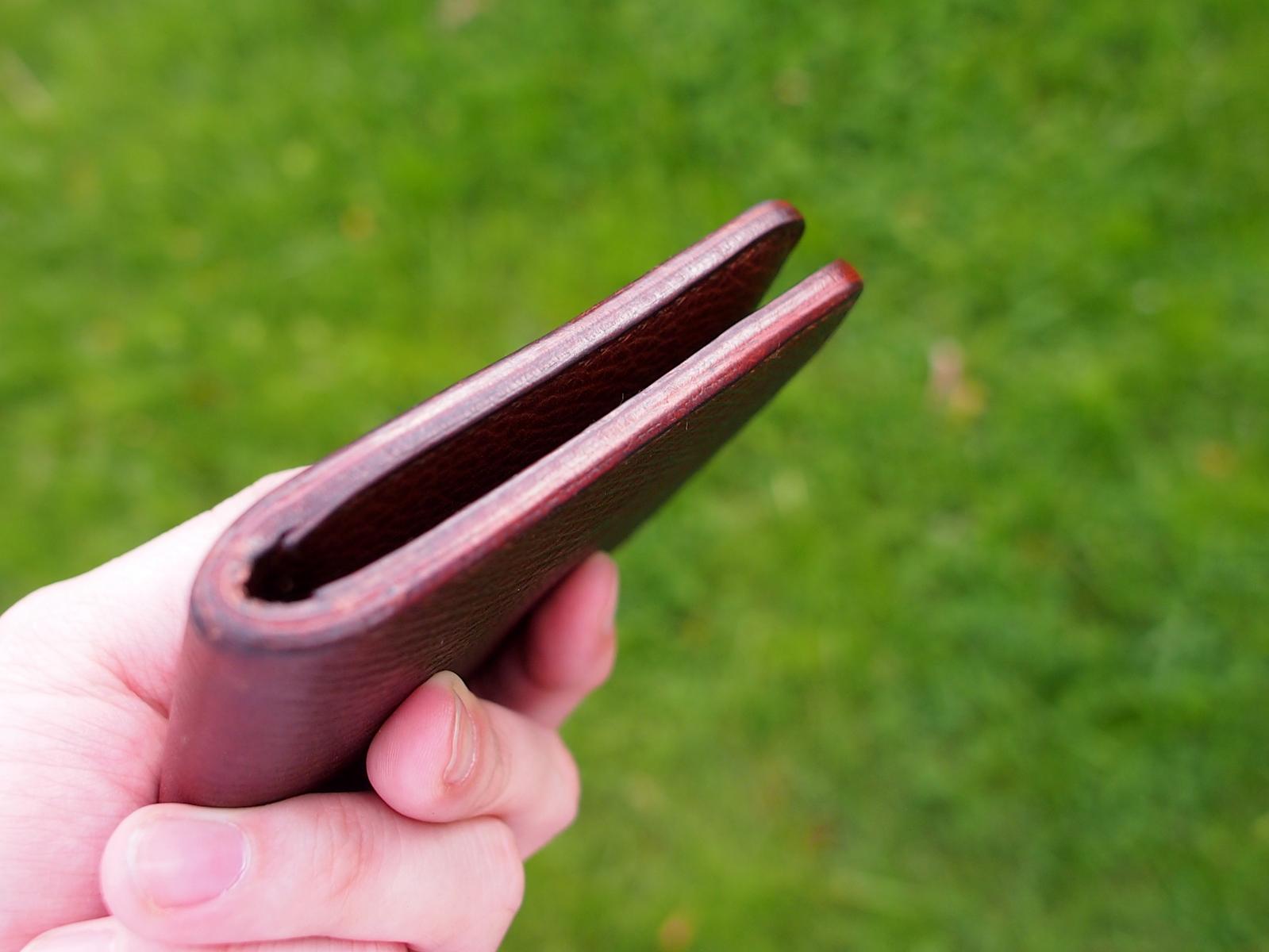 The saddle-stitch sewing on this wallet is unusually dense – at 7 SPI across the top edge and a very tight 8 SPI along the sides and bottom. This dense stitching was made possible by fine handwork and dense, nicely vegetable tanned leathers.

The hand-stitching is neatly executed. The linen threads sit close to the surface, and are placed. 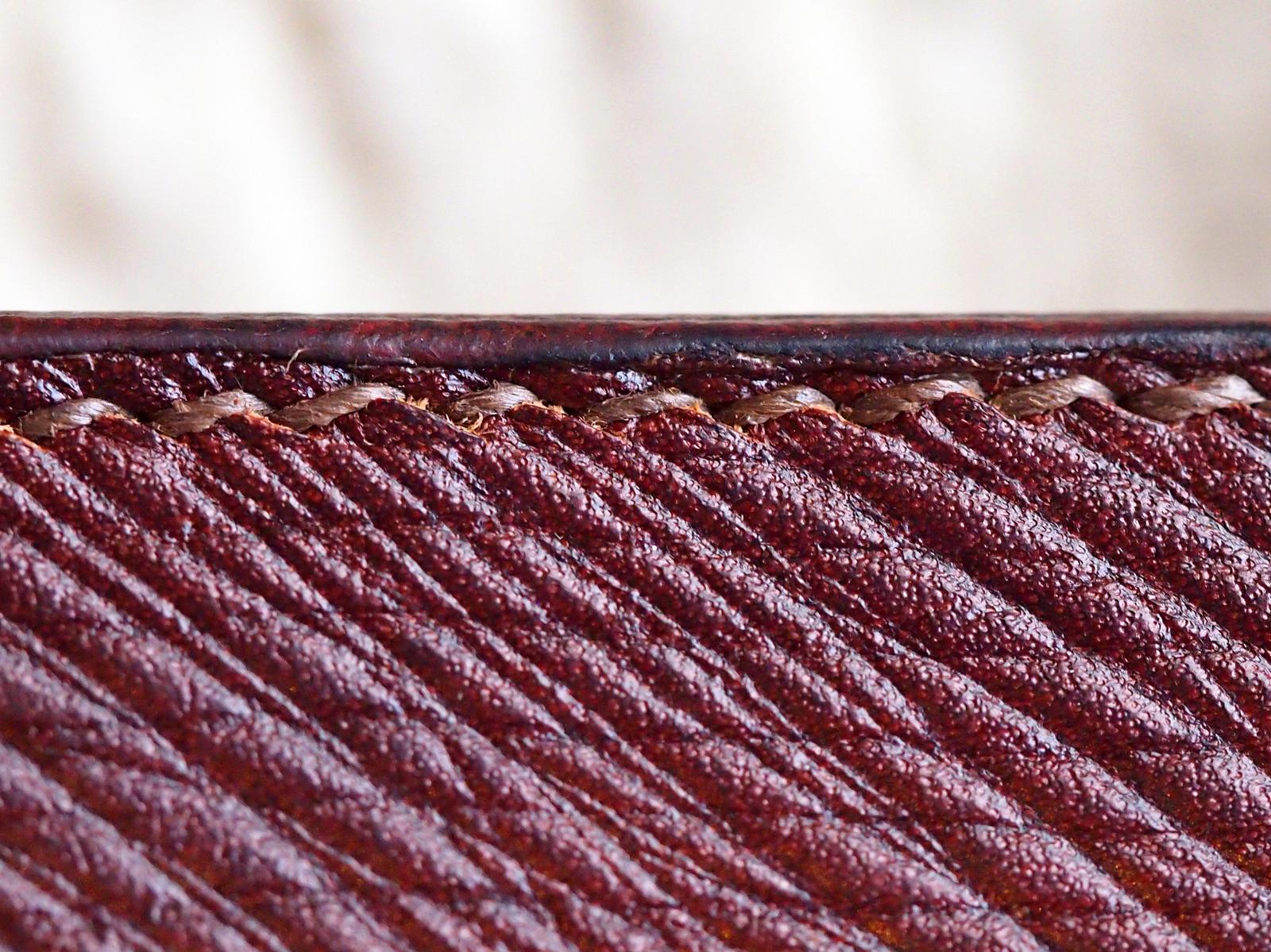 The tonal, wheat thread colour allows the leathers to shine as the main characters, and gives the wallet a more understated appearance.

At two points along the inner, in between the card panels, the threads have cut into the leather, but these are minor cosmetic imperfections that are barely noticeable and do not affect functionality. The issue here is that the Tanneries Du Puy calf leather is not quite dense enough to hold such tight stitching. 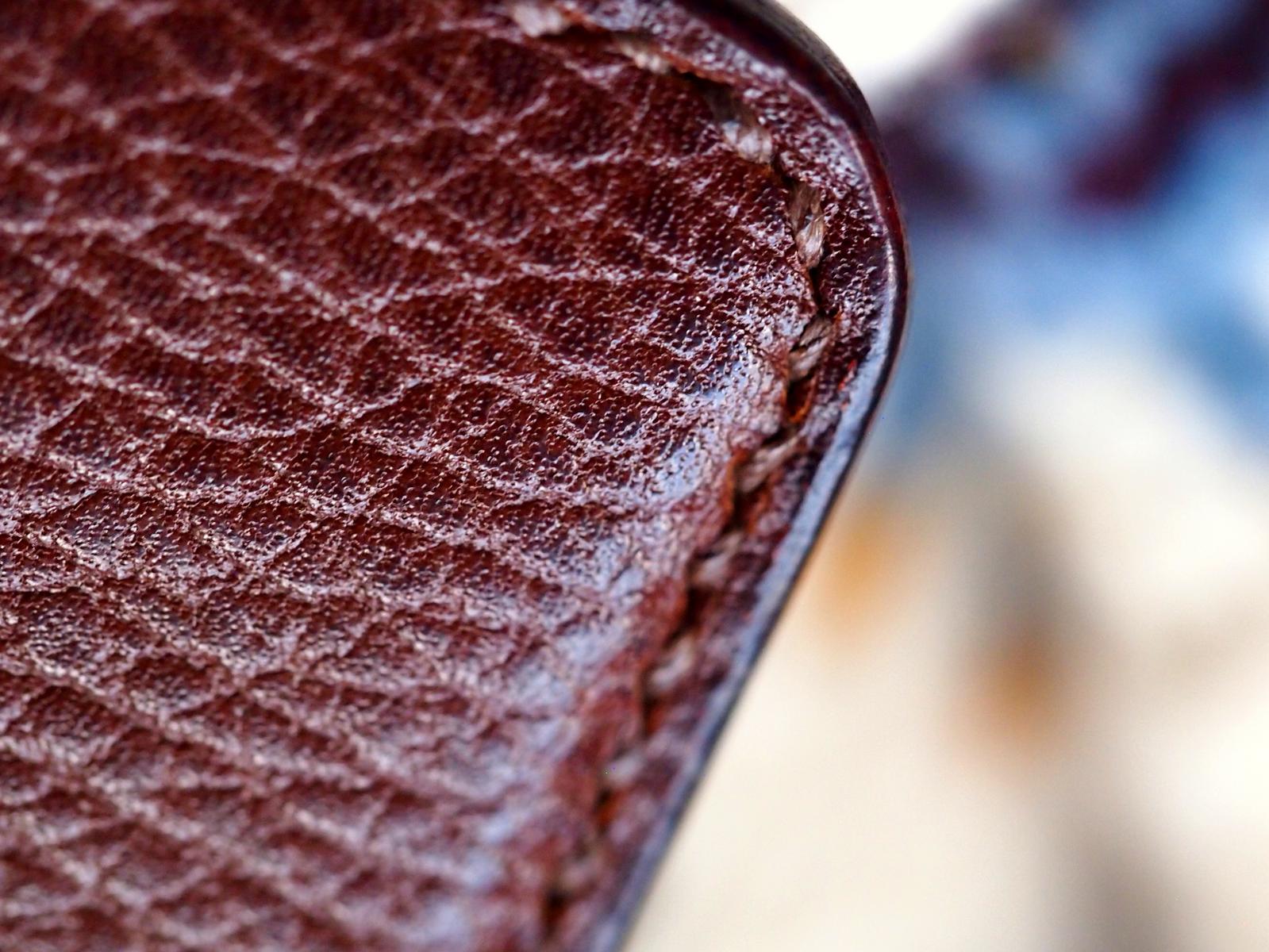 Although three different leathers were used, the careful construction allows the panels to blend smoothly into each other and the wallet appears to be a solid whole. 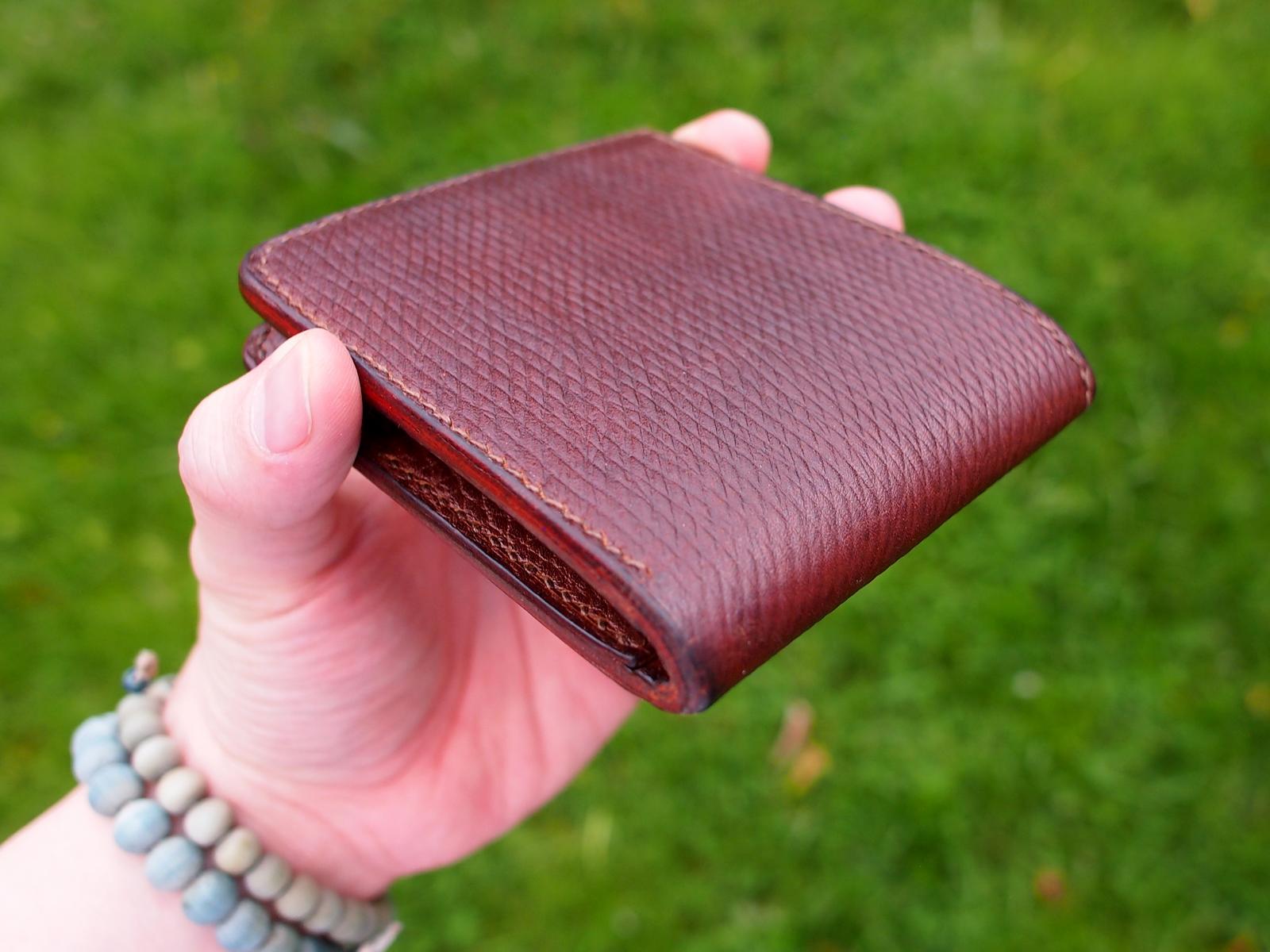 Overall, very nice hand-crafting featured on this wallet. The finer, denser hand-stitch was particularly interesting – an English twist on the work-style aesthetic which helps this wallet stand out.

Overall, this Rushton Leather wallet made by Lee in Northamptonshire is one of the most interesting wallets in my collection. From the superb Russia kip leather used to the refined British workwear and military styling, this wallet really stands apart from the usual Americana fair that is most common in our denim & leather hobbies. 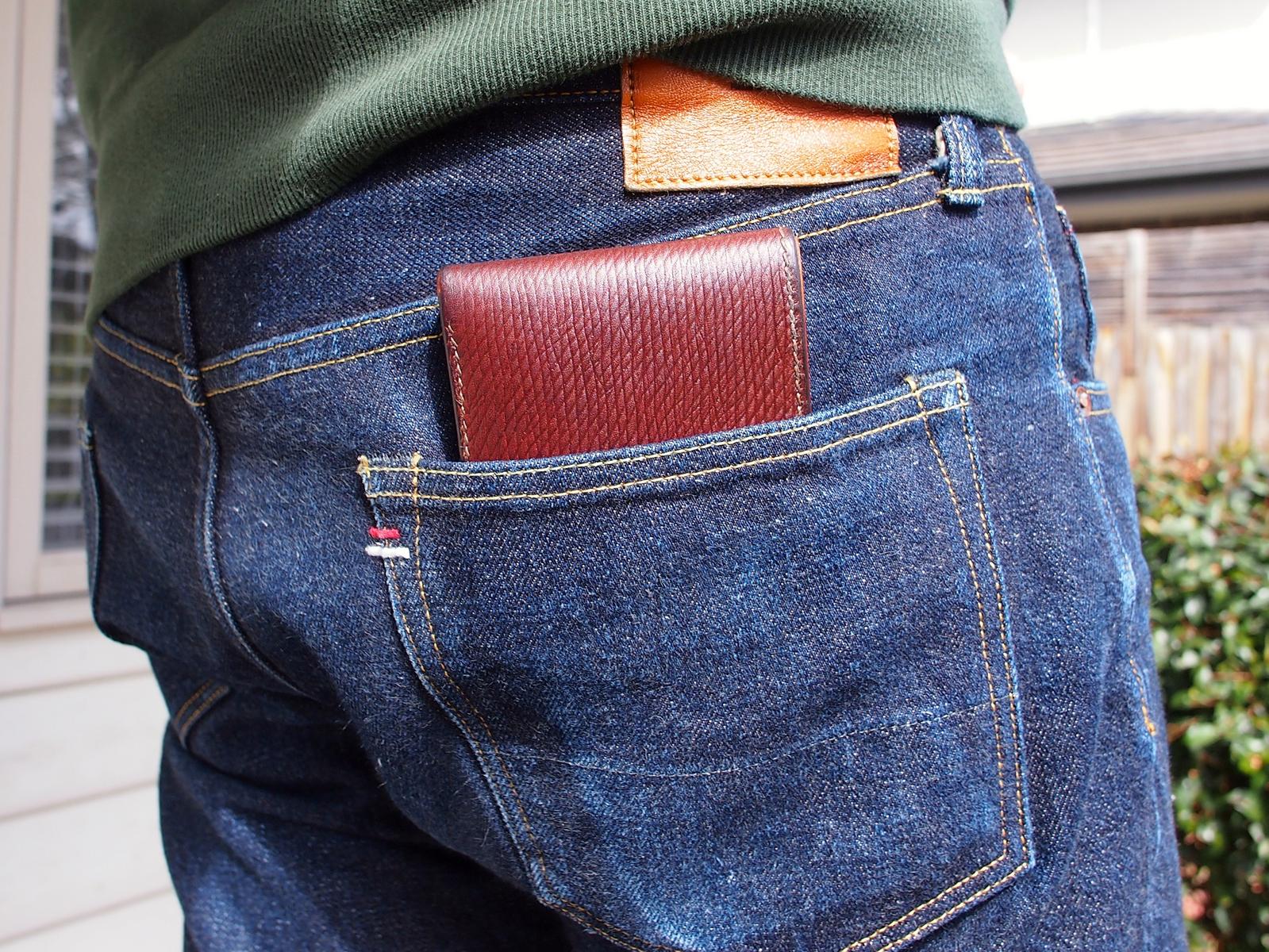 Like me, Lee is a big fan of grained leathers, so there is a sense of solidarity here, now that the leather hobby is drowning in shell cordovan and English bridle leather wallets.  The Russia kip reproduction from Baker’s is one of the most interesting leather’s I’ve come across in terms of tannage, texture, smell and hand-feel; I would very much like to commission more goods made out of this Russian leather.

I am not the biggest fan of calf skin – as much as I like leather, I’m a little uneasy about the idea of killing animals when they’re young – but ethics aside, the French calf leathers used here are superb. 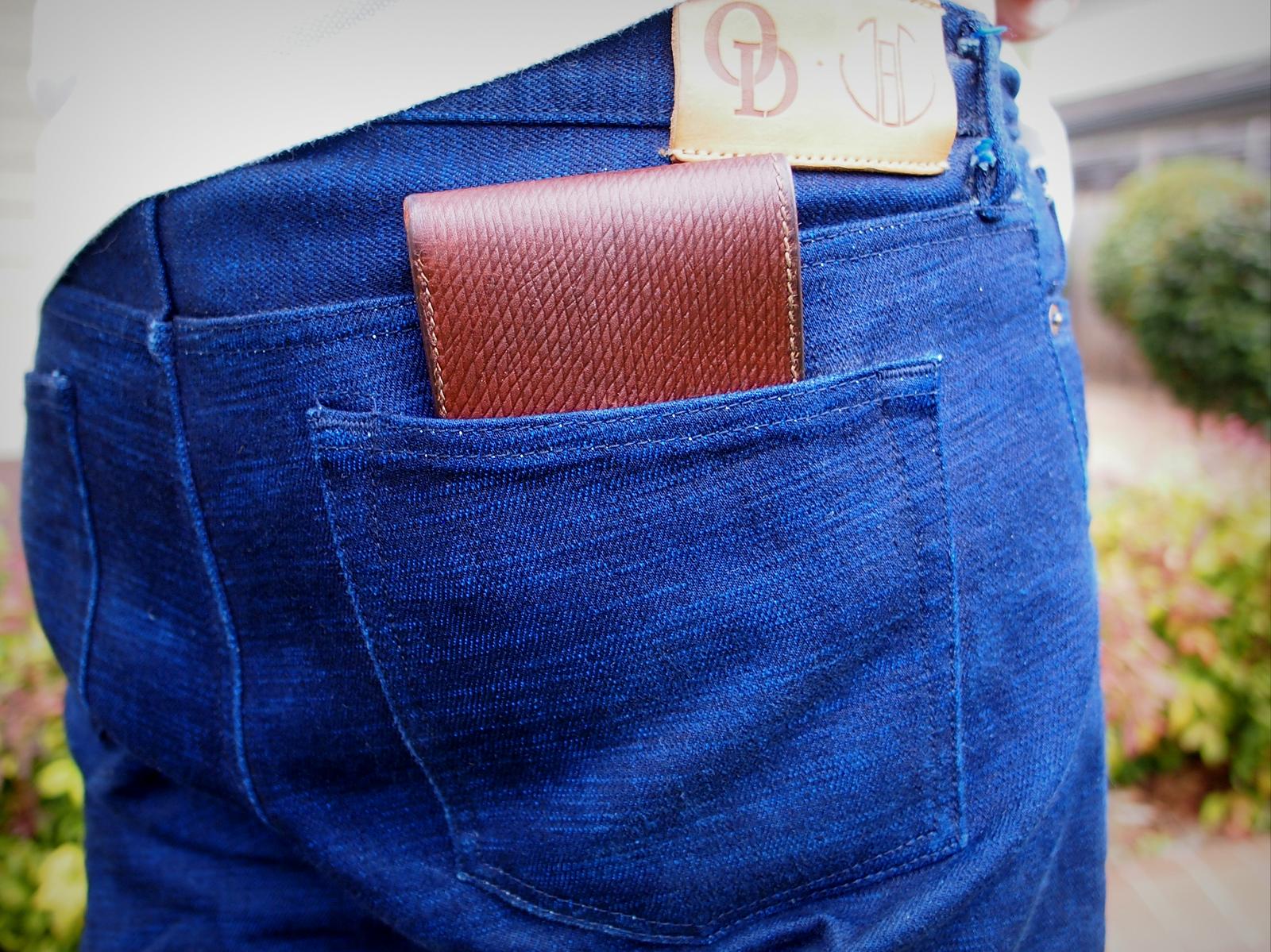 The hand-crafting here is pretty good. Much work has gone into making this wallet, and the dense hand-stitching is particularly noteworthy. Factoring in both crafting and materials, at 100 GBP this Rushton Leather wallet is priced very nicely.

Lee also provides a service where update photos are sent to his customers as he crafts the leather goods, so you really get a sense of being involved in the crafting process of your commissioned item. 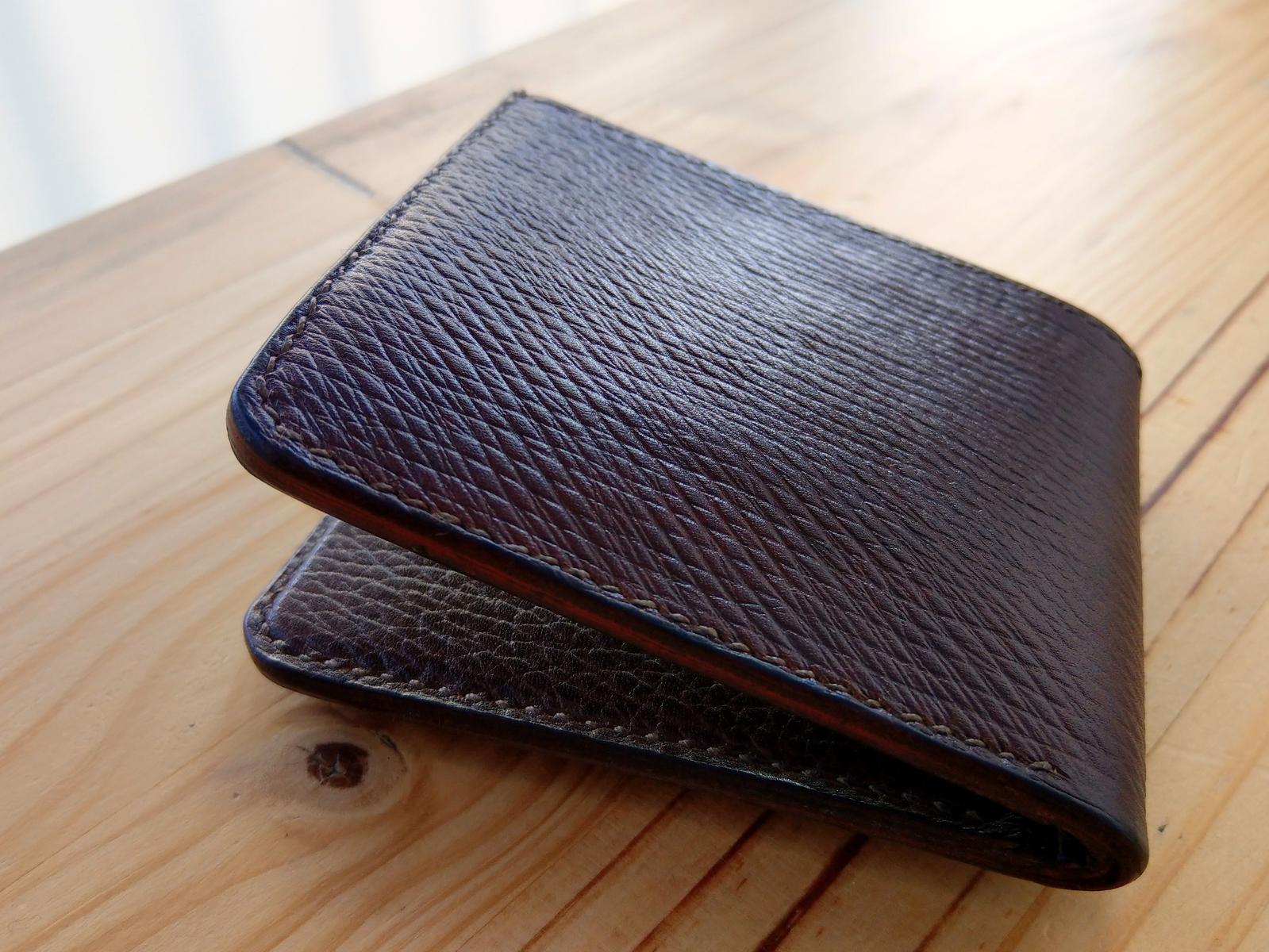 Full customisation is possible through Rushton Leather, and I do have a couple of wallet designs in mind that would look great, IMO, in Russia kip.

Stay tuned for more from Lee on this blog later next year.

Until then, if you’d like your own Russia kip carry piece, check out Rushton Leather at Lee’s etsy shop and Instagram page!