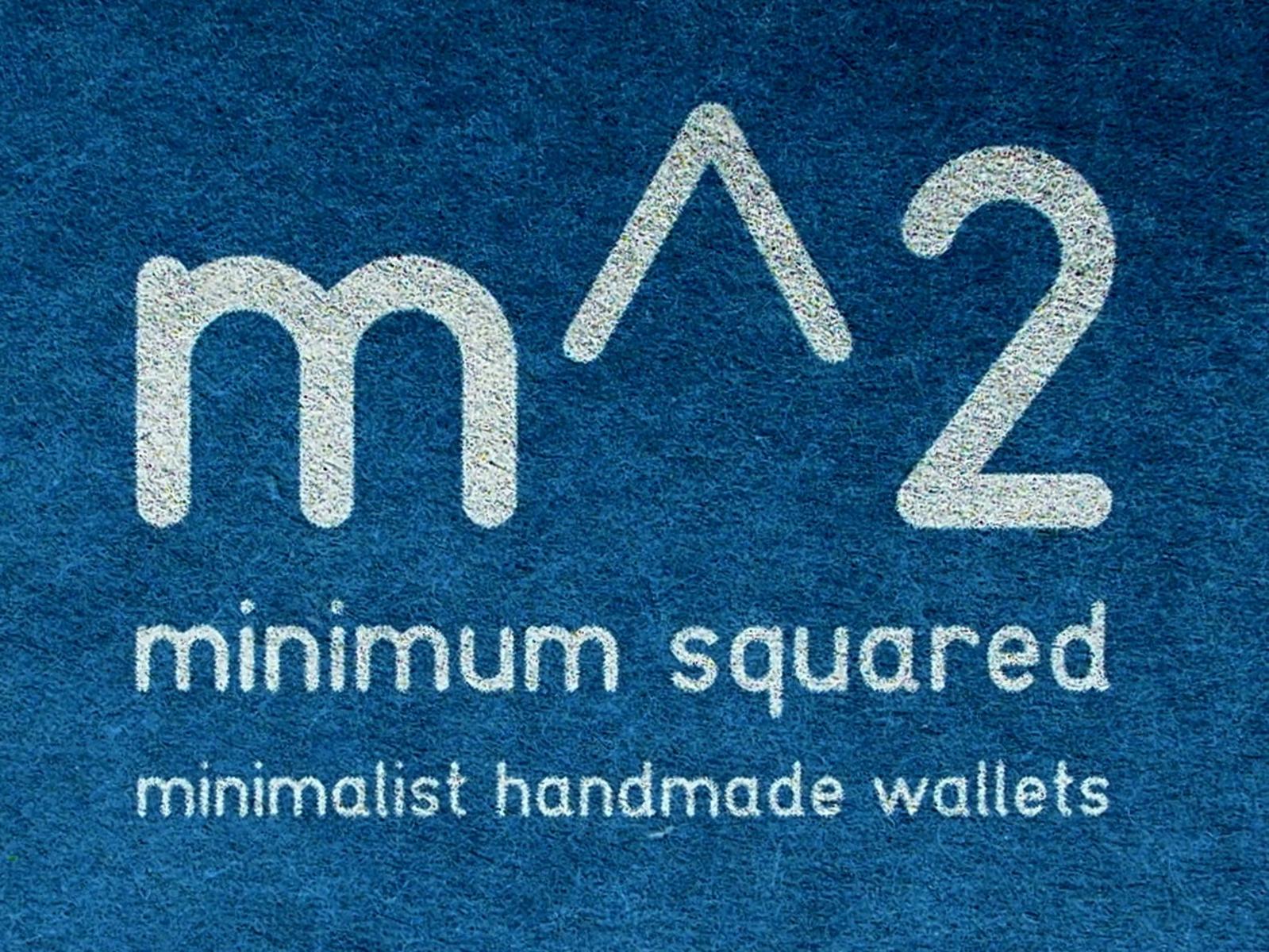 I’m hoping to show you something a little bit different today. This piece we’ll be looking right now is a wallet, yes, though rather different compared with the usual you’d have seen on this blog.

m^2 (minimum squared) is a husband and wife team from Valencia, Spain. Adrian & Sanela specialize in carefully engineered, minimalist wallets. They follow the motto that form follows function; the idea, specifically, is for their wallets to occupy the least amount of space and at the same time having enough capacity to carry – in a user friendly manner – the cards & notes that are essential for everyday. Adrian & Sanela had solved this little riddle, and the resulting design (their Slim Wallet with Elastic, SWE) actually won a Red Dot Design Award in 2016. 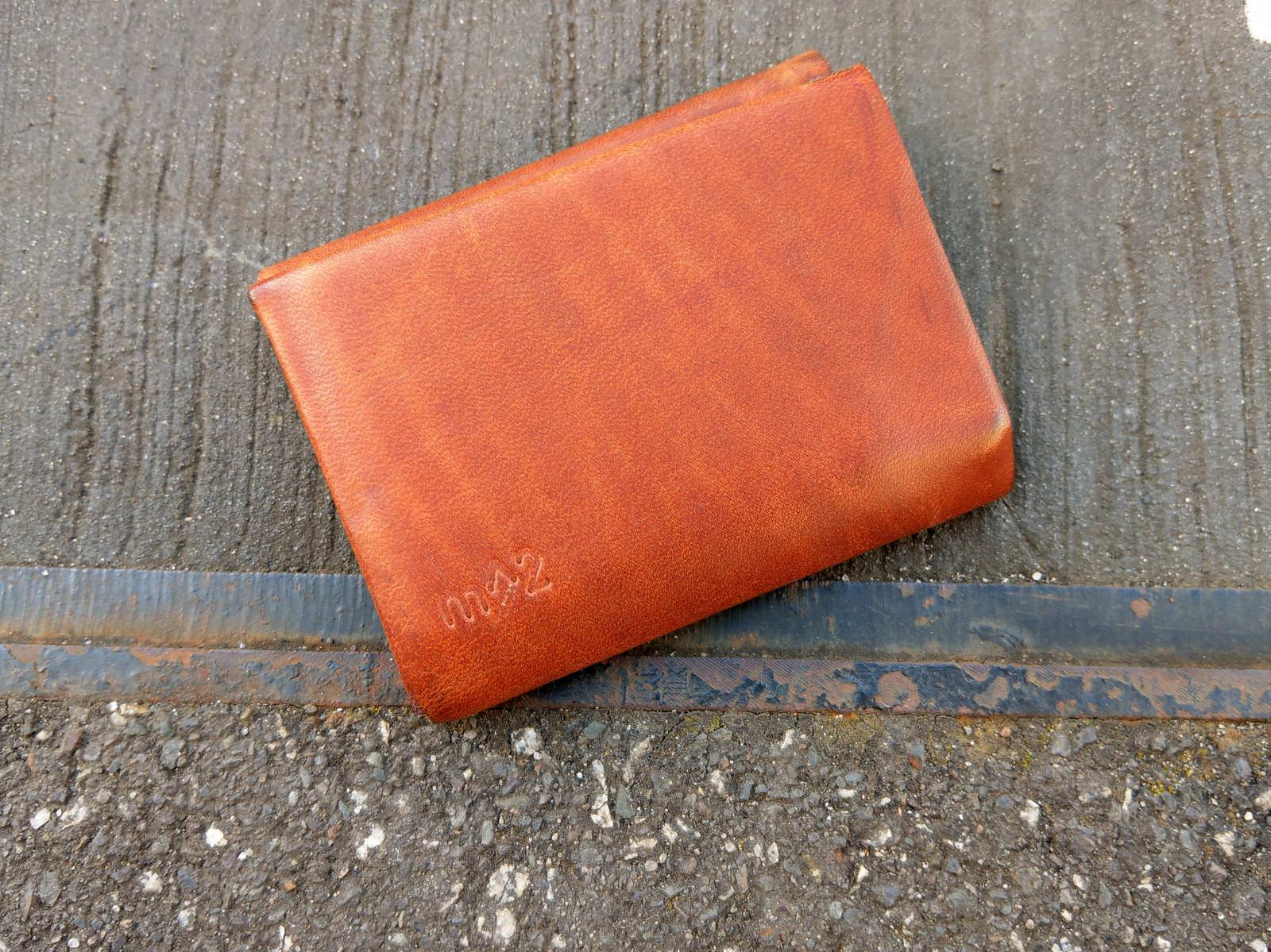 The wallet sent to me for review today is the newest version of the award winning original – the Slim Wallet (no elastic, SW) in Horween’s Dublin leather.

I am aware that there are already some reviews out on the internet over the past years of m^2’s wallets, and so today – rather than a generic overview – I’ll try to think about this Slim Wallet (SW) from a work-wear & leather geek’s perspective.

The SW comes nicely parceled in a sturdy box with a personalized note and a very cute little chain of sample swatches, showcasing the various leather options available. 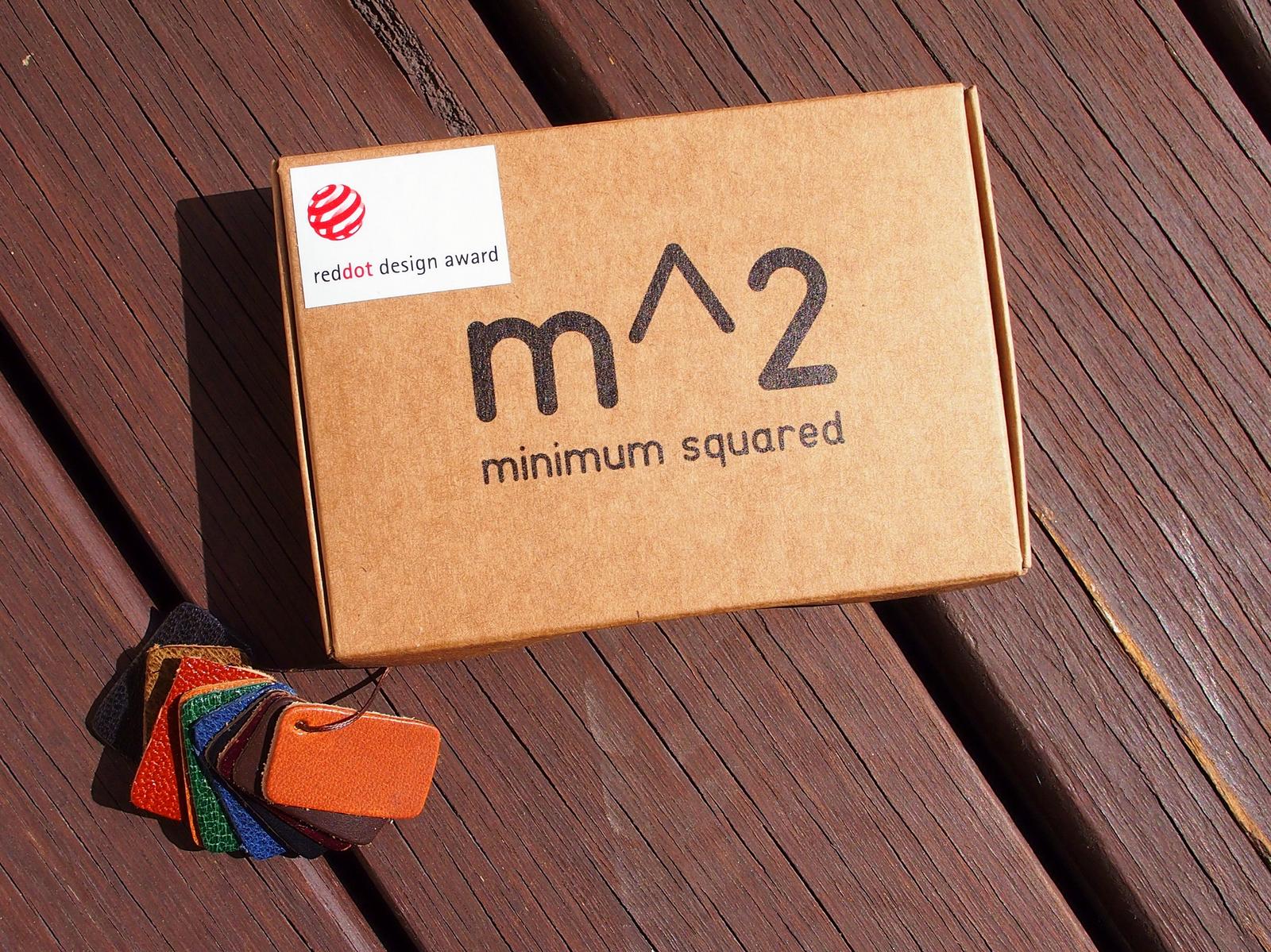 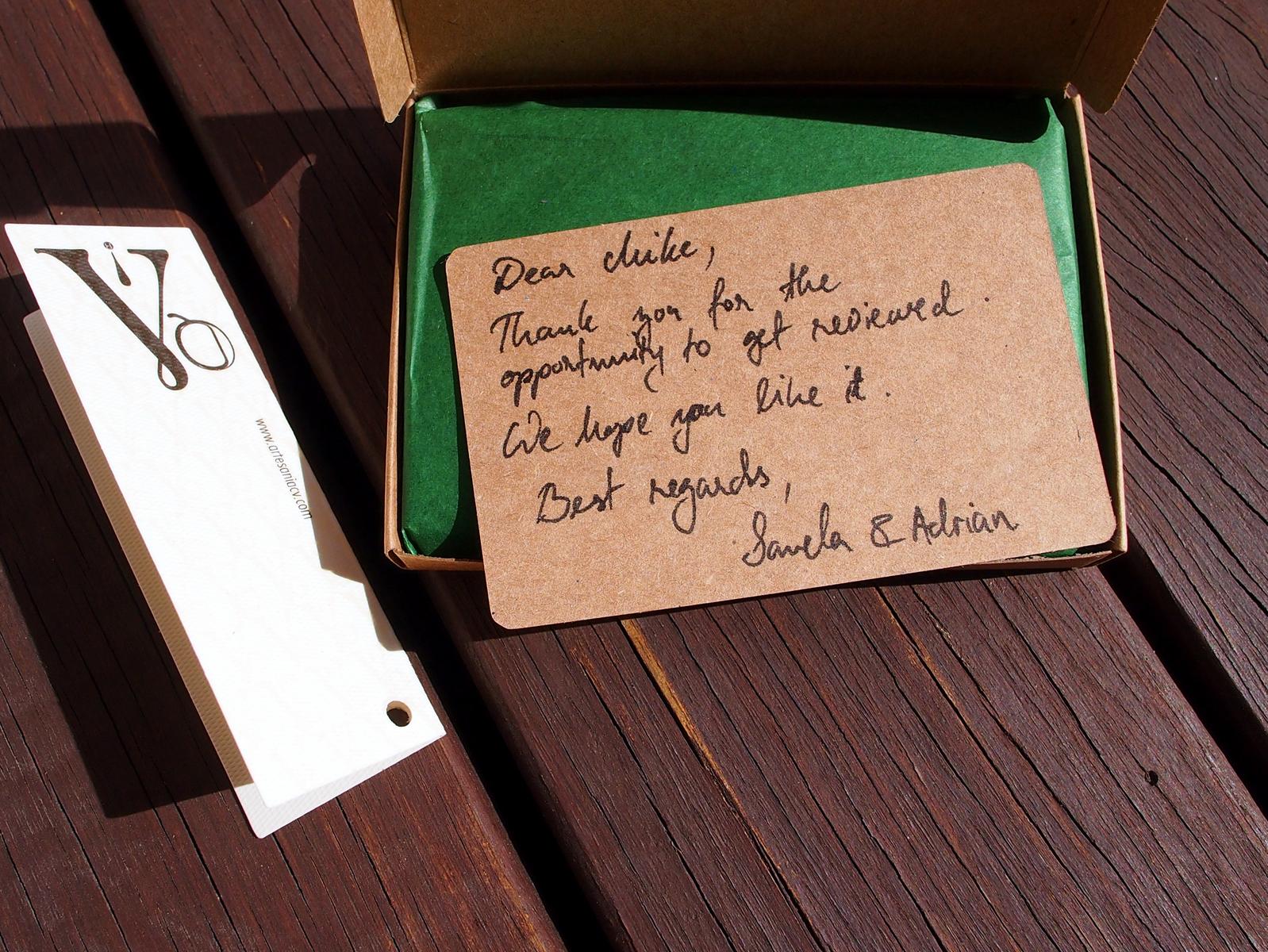 One of the neatest packaging presentation on a workshop leather piece I’ve seen until now.

The design is where the SW stands apart from the many other wallets that have been featured here over the years. Firstly, the function over form approach is fairly unusual in our hobby, and the extreme levels of minimalism and ergonomics involved in this wallet are usually not part of the work-wear or leather-craft hobbies. 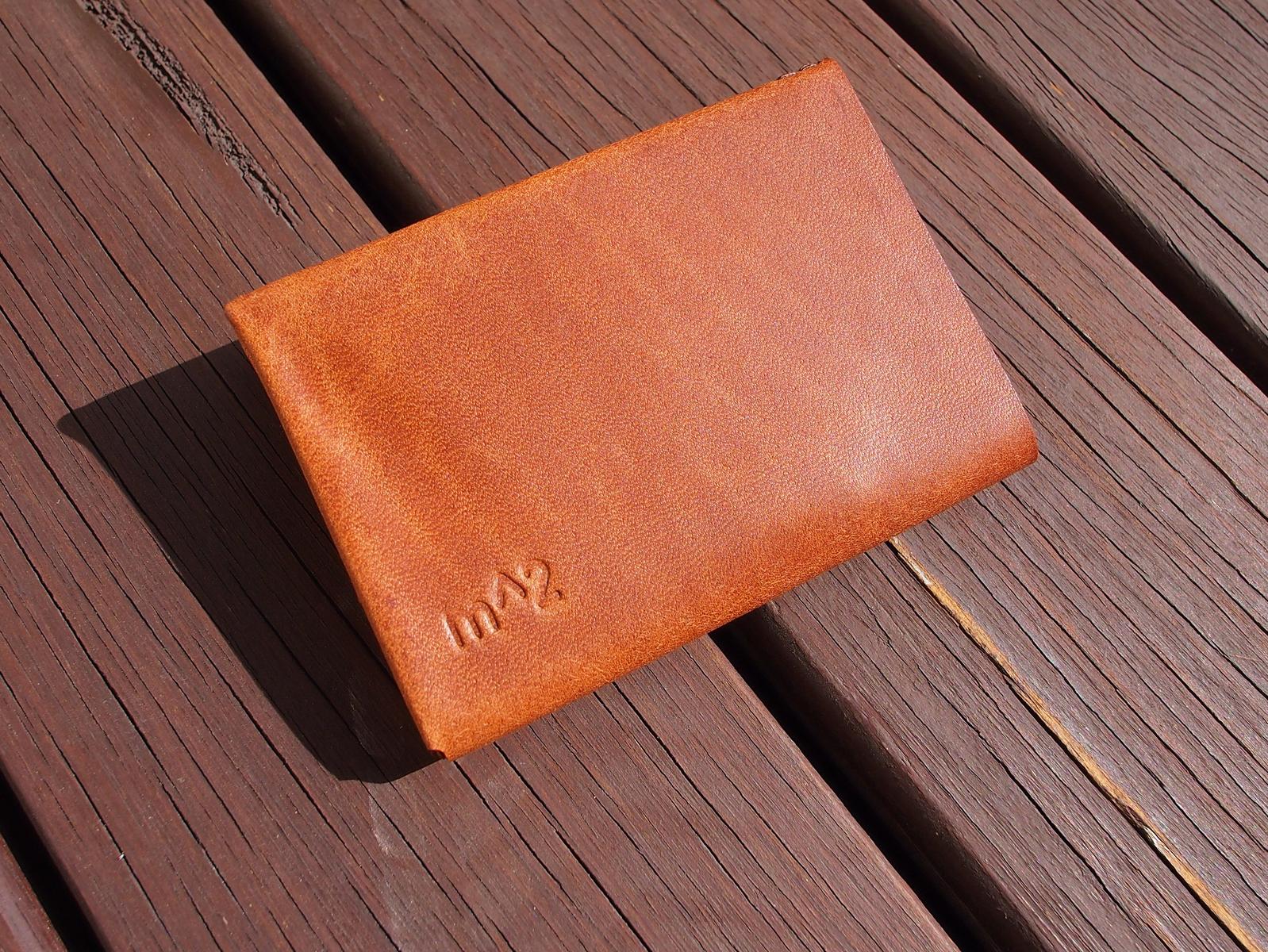 In terms of two dimensional footprint, the SW has a surface area not too much bigger than a credit card. This is significant because the SW can actually carry 10 cards and a handful of notes comfortably. 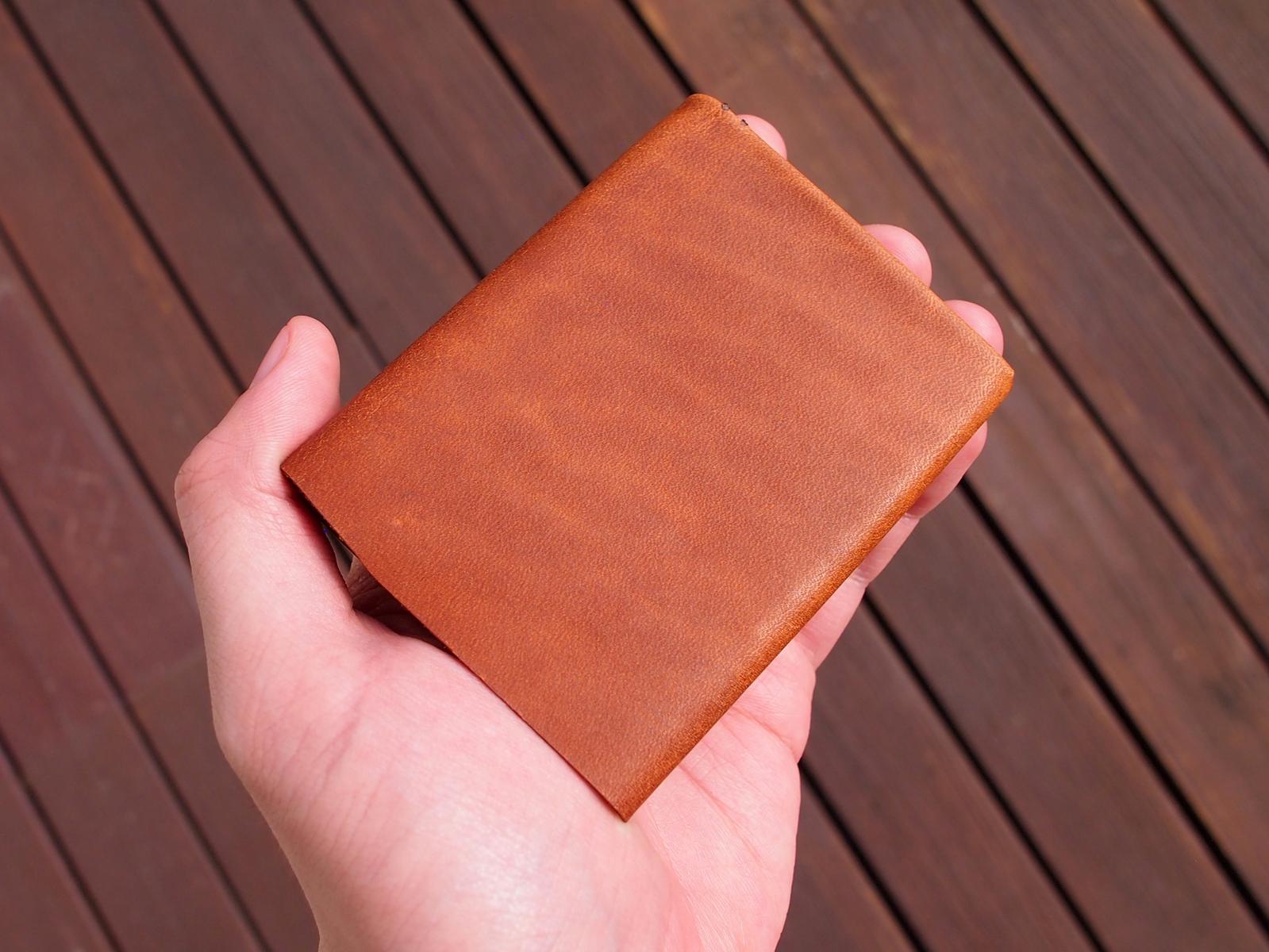 Considering the three dimensional volume, at near maximum capacity – carrying 10 cards, 8 notes – the SW has the rough dimensions of 9 cm x 7 cm x 1.5 cm. Thinking about it a different way…the SW occupies less than half the volume of a traditional billfold, yet carries the same amount of items!

This massive carrying capacity, relative the the small space and mass of the leather piece, has been made possible by engineering – Adrian is an engineer by trade, and he has adopted a mathematical approach to the design of the SW, which is based on their original SWE design from a few years back. The SW mostly just does away with the elastic band. 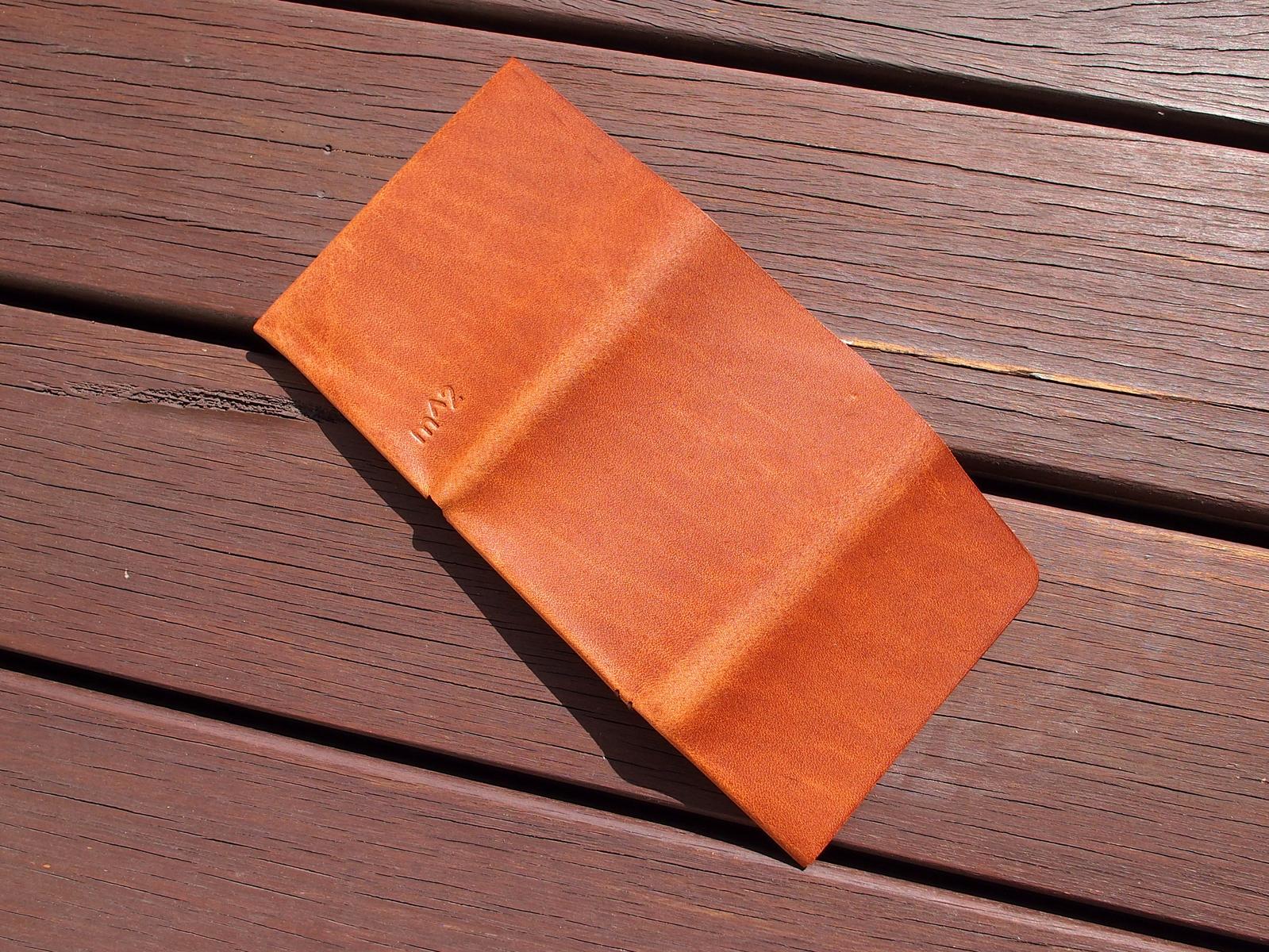 A single piece of leather is transformed into a small wallet with 4 card slots and 1 notes compartment. The pattern design and folding lay-out is actually, the more I think about it, totally genius. 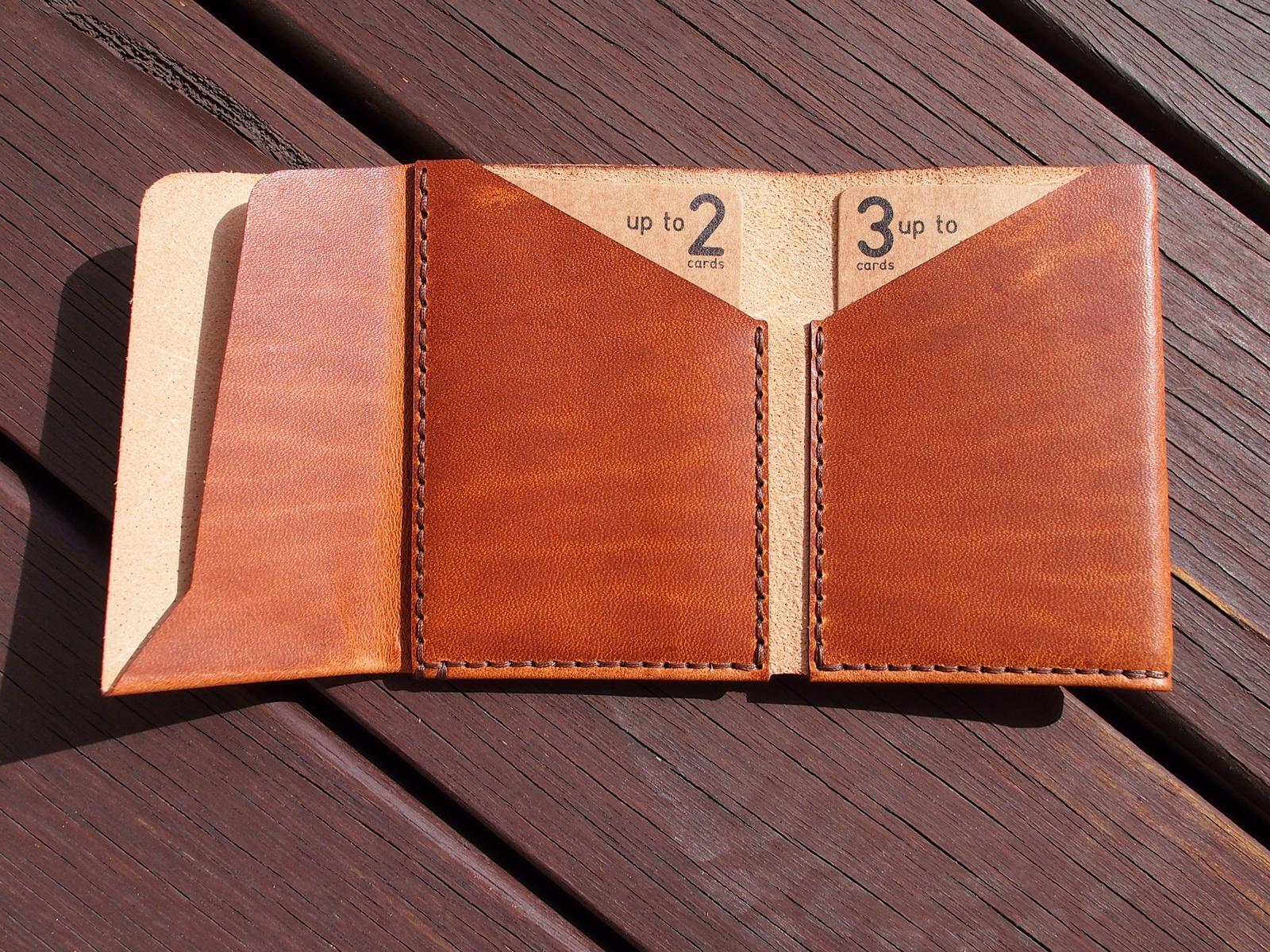 All the card slots are oriented in the same direction, and will either hold two or three cards (indicated in the photos here) with the same, relatively tight tension.

The two front slots are easy to access, whilst retrieval from the two inner slots will require you to open up the notes compartment as below. 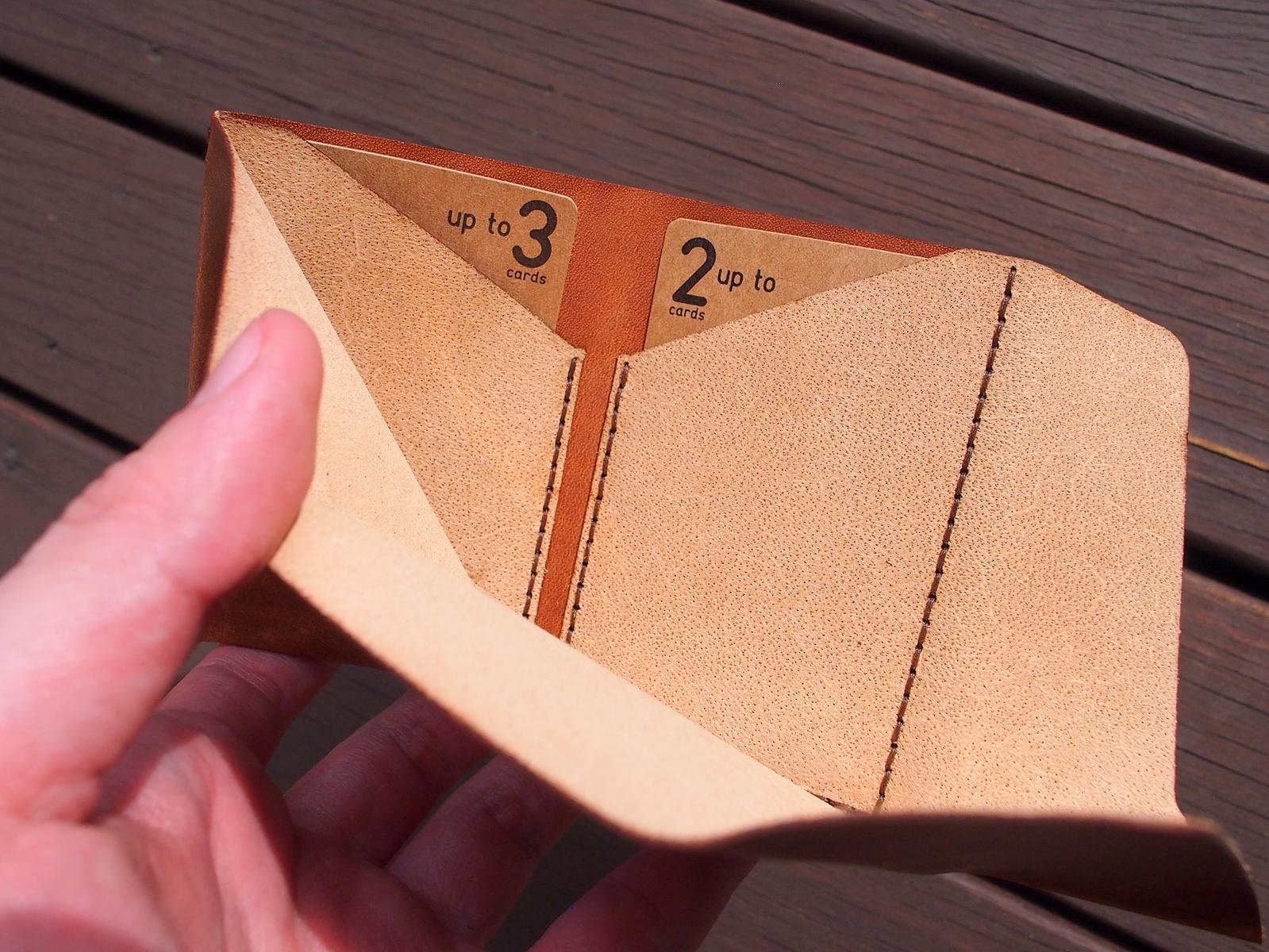 The notes compartment is very well sized and easy to use. It will hold all the common international currencies – I’ve tried Australian, American, Taiwanese, Japanese – without the need to fold the notes. 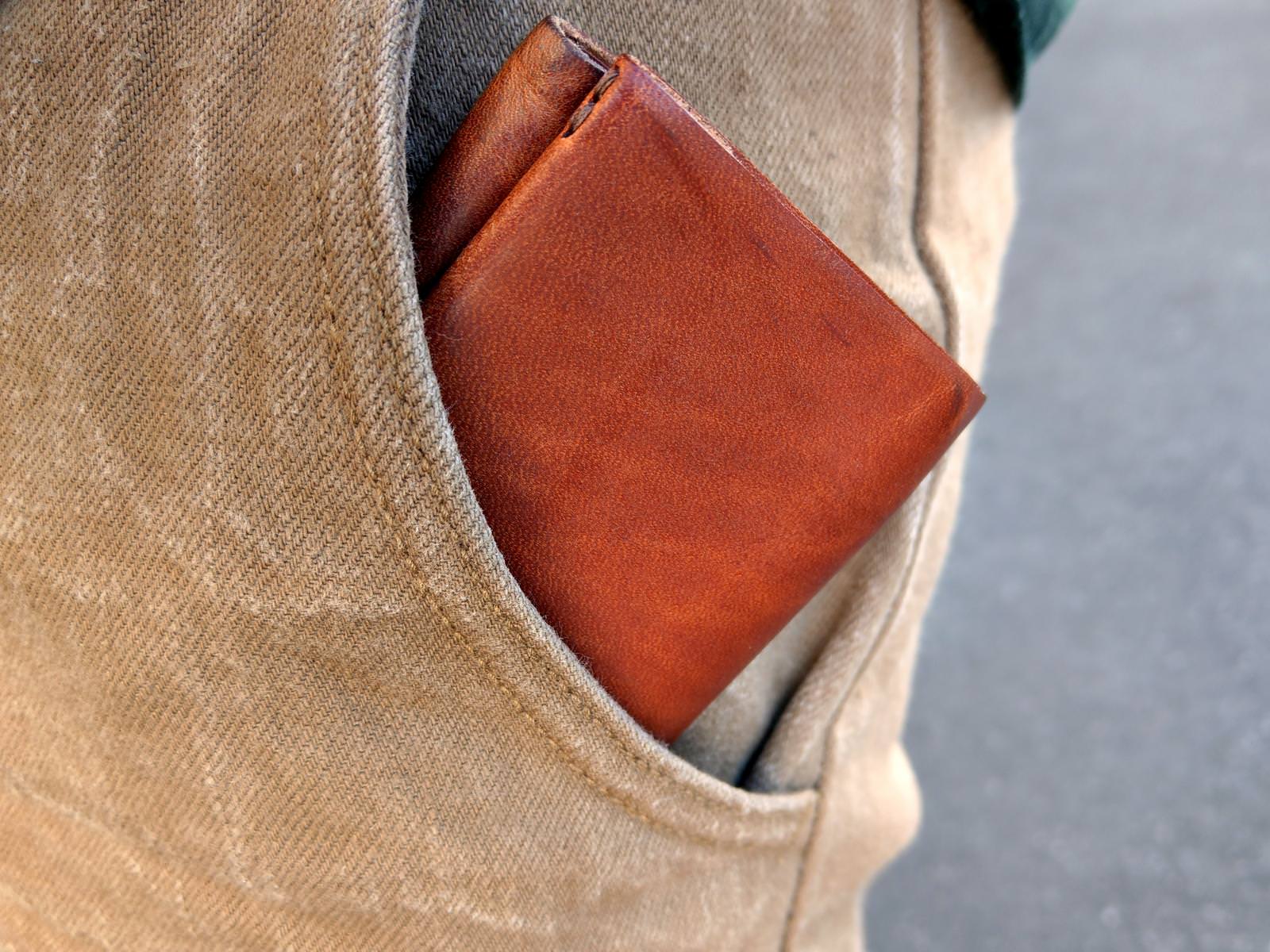 The top flap is tucked between the two sides of the body once the wallet is loaded, and this little number will fit pretty much anywhere – front pocket, back pocket, shirt pocket, vest pocket – without distorting the drape of the garment too much.

m^2 is probably best known for their use of British vegetable tanned goat leather on their SWE, though my SW is the latest version made of Horween’s Dublin leather.

To enable the complex folding required for the design, the Dublin leather utilised has been skivved – using a laser – down to 0.7 mm thick! At this thickness, the leather is entirely in the grain layer; I can even see some pores from the backside of the leather. 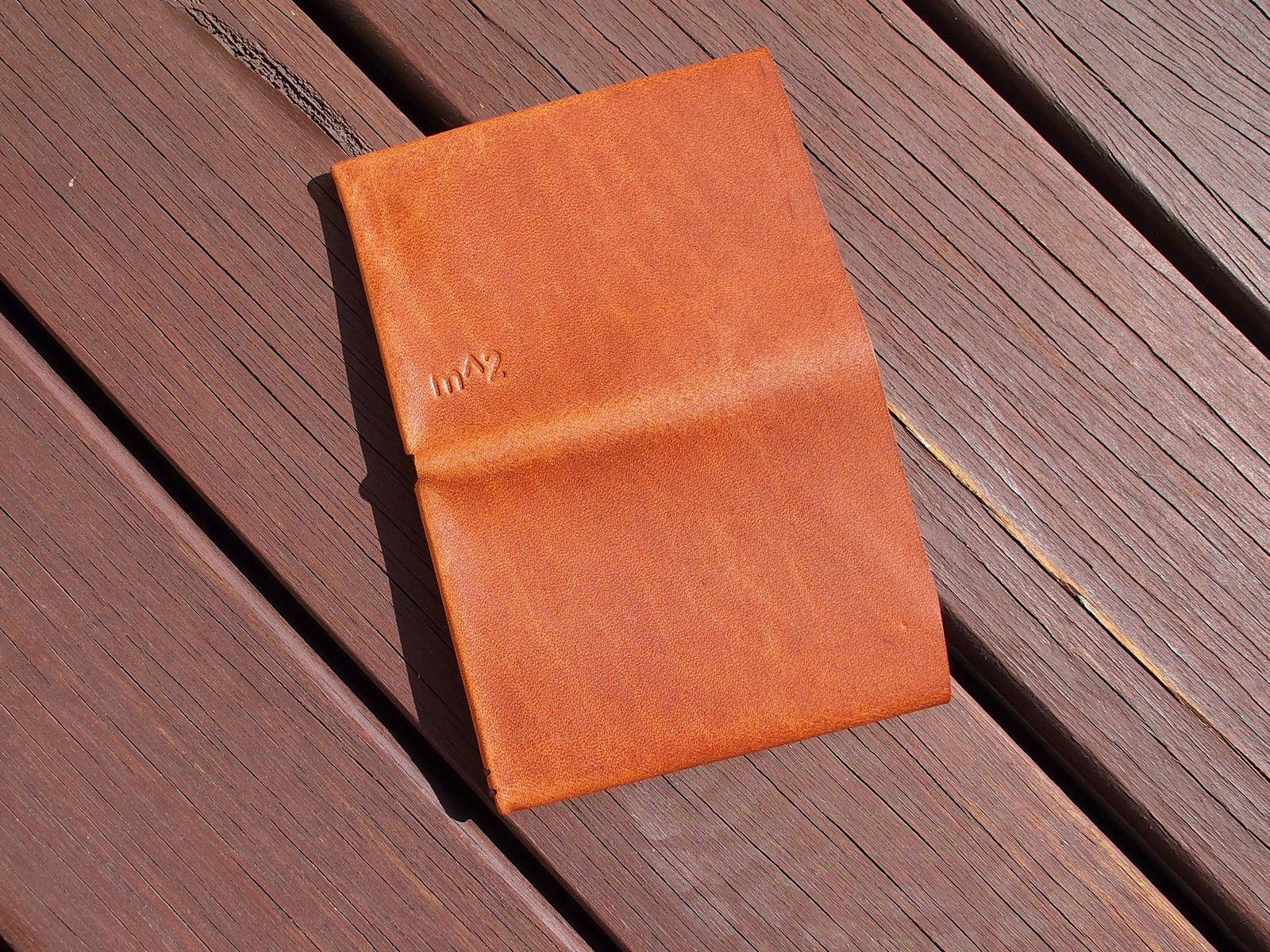 The SW is further available in various colours of CXL, but Dublin is the nicer leather if you’re a leather purist.

Horween’s Dublin is one of their newer full-vegetable tannages, applying Horween’s method of manufacturing shell cordovan to cattlehide. The straight veg tan is the Essex, whereas the Dublin is the wax-finished version of the Essex.

CXL, on the other hand, is a re-tanned leather (chromed then briefly vegged) – more rugged, but less graceful over time. 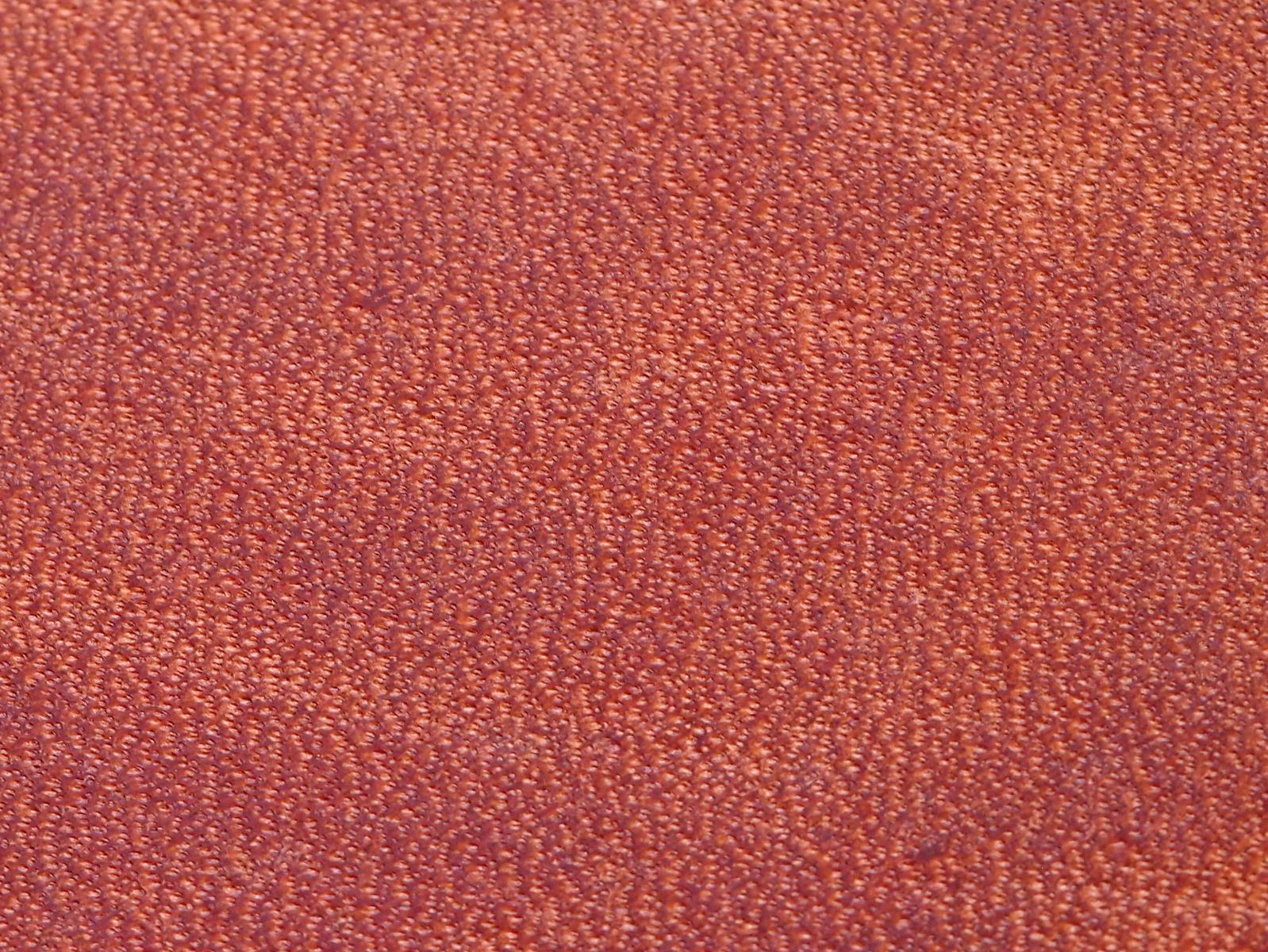 In reviewing this wallet, I used it pretty intensely over a two week period, and in the photos below you can see how the leather ages initially: 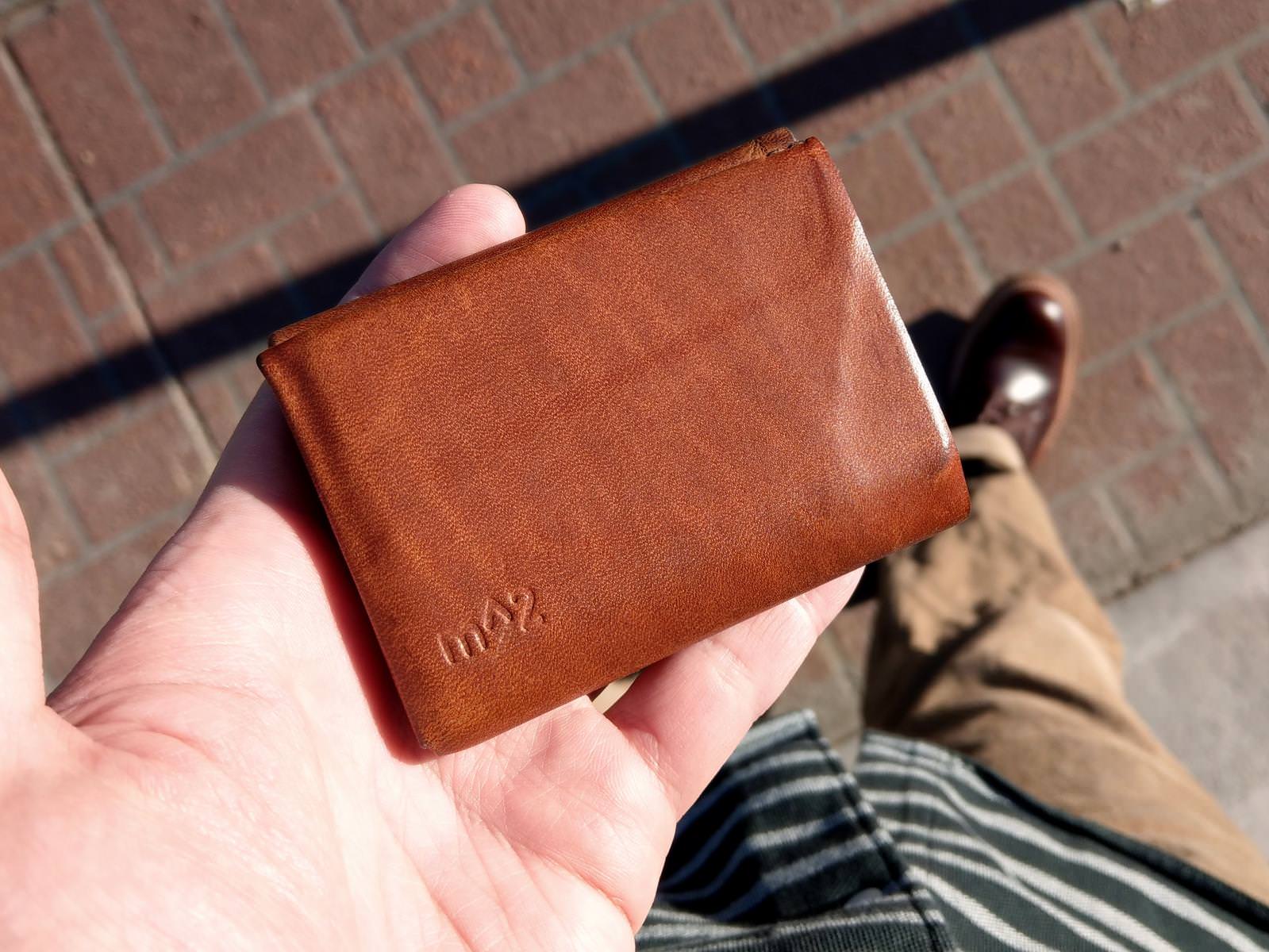 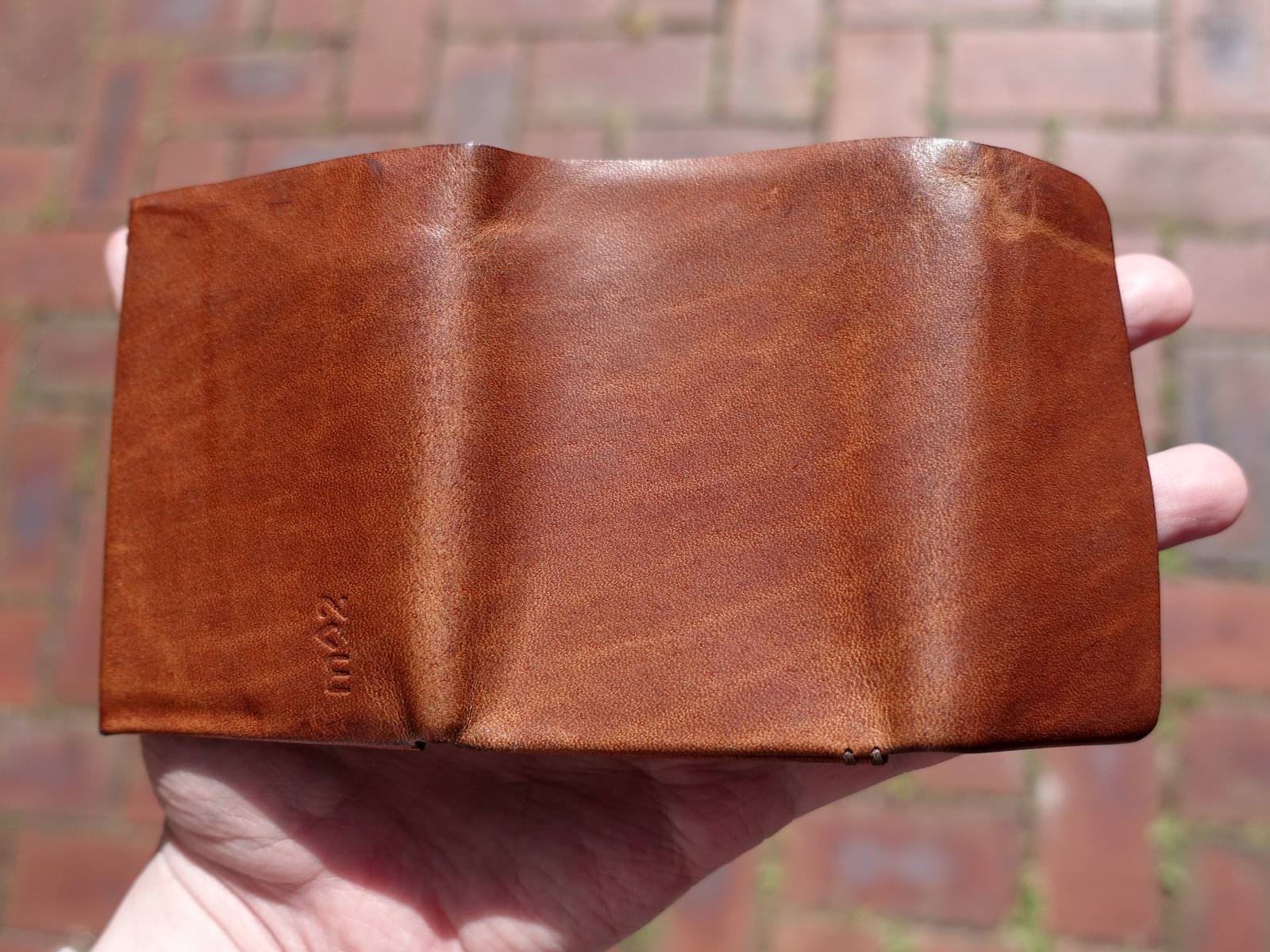 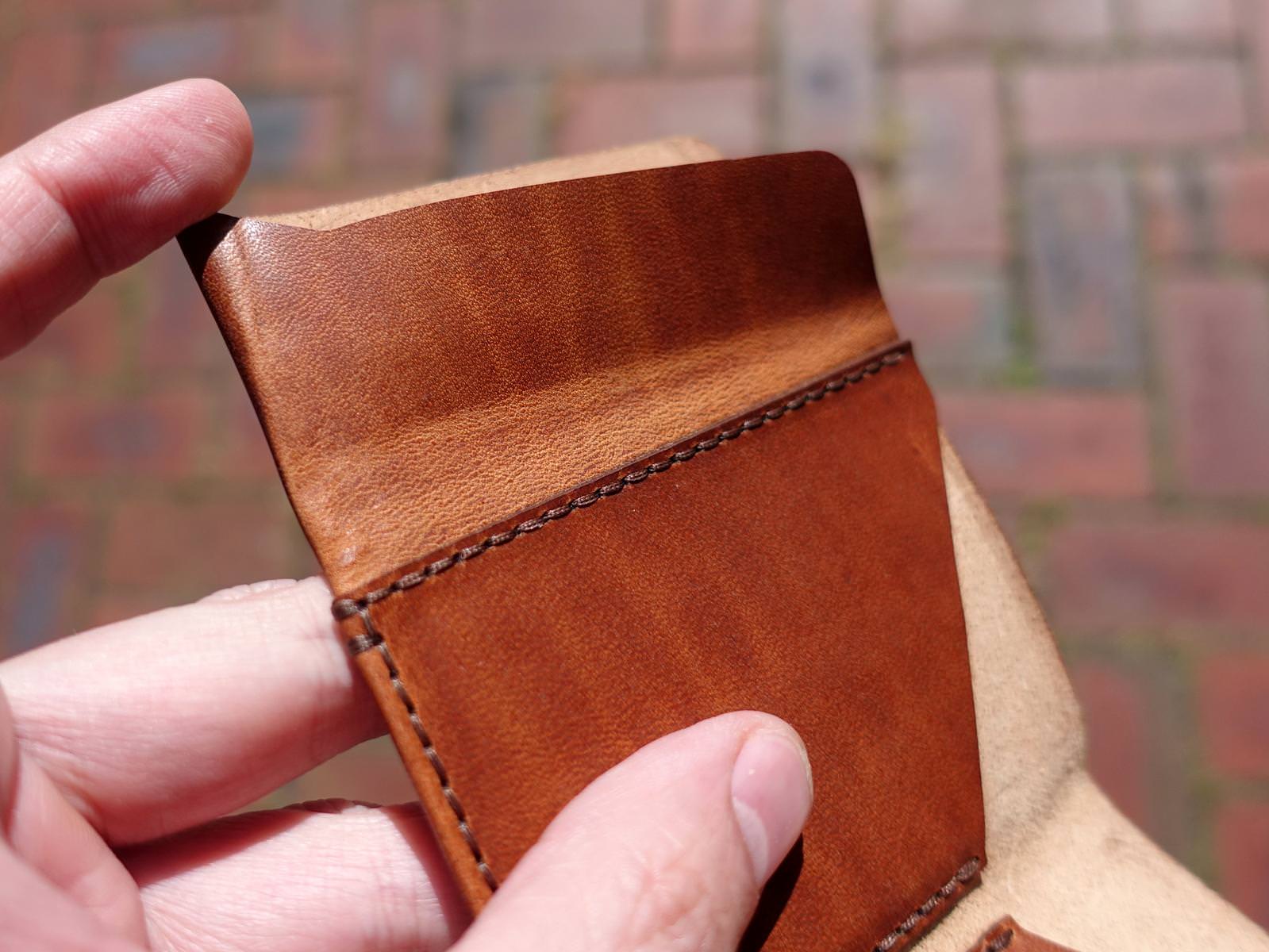 What you can observe here is that the leather’s significant oil content and pull-up allows it to age in a way which is vastly different from most natural vegetable tanned leathers. The evolution aesthetics is very recognizably Horween! 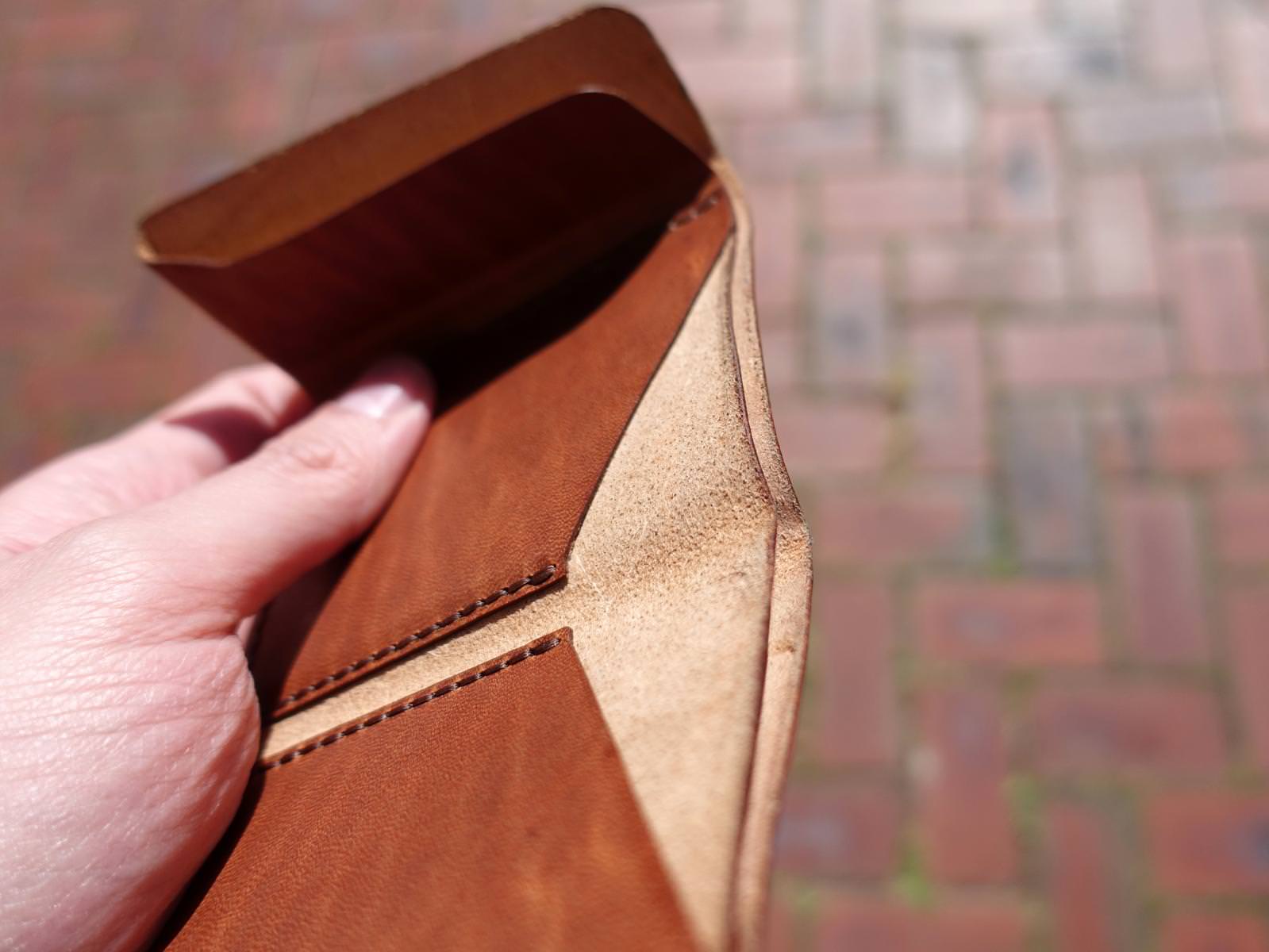 The relatively early stretching and changing of shape is mostly due to the thinness of the leather, but its softer temper plays a role too. 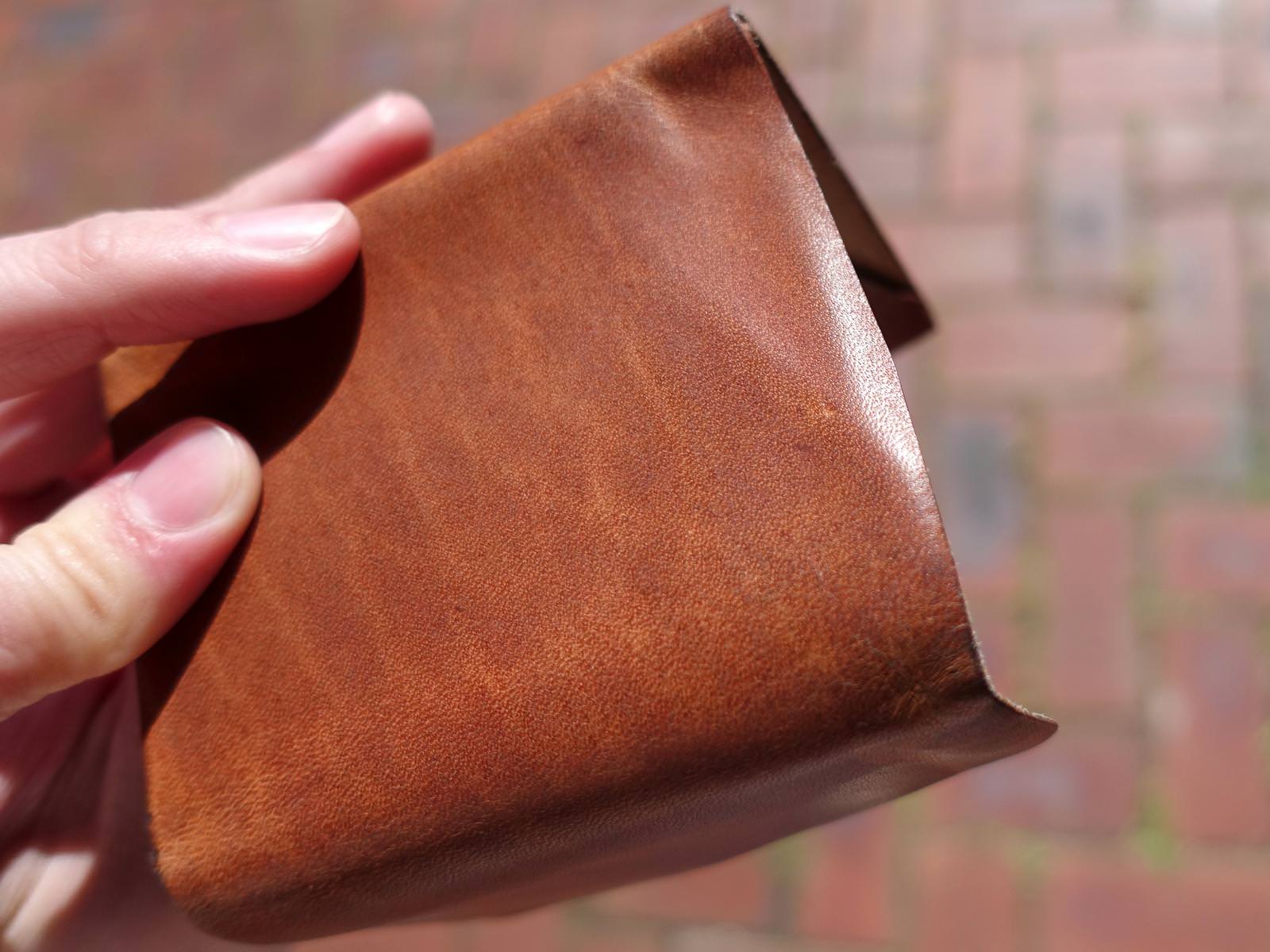 The crafting of this wallet is an interesting combination of modern tech and traditional hand-work. 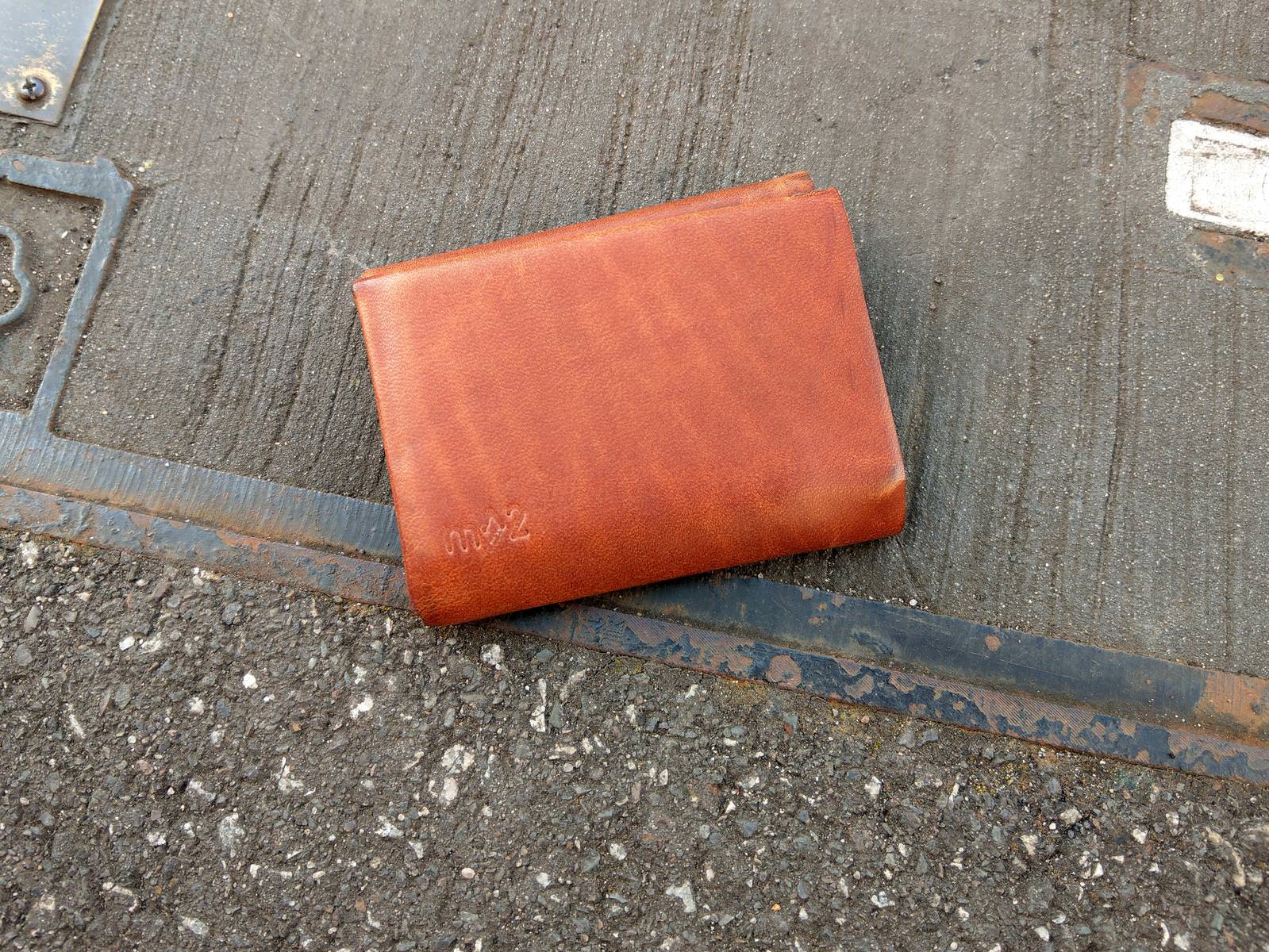 First, the hide of leather is neatly skived to thickness using laser, and one piece of  leather is cut from the hide, also using laser! 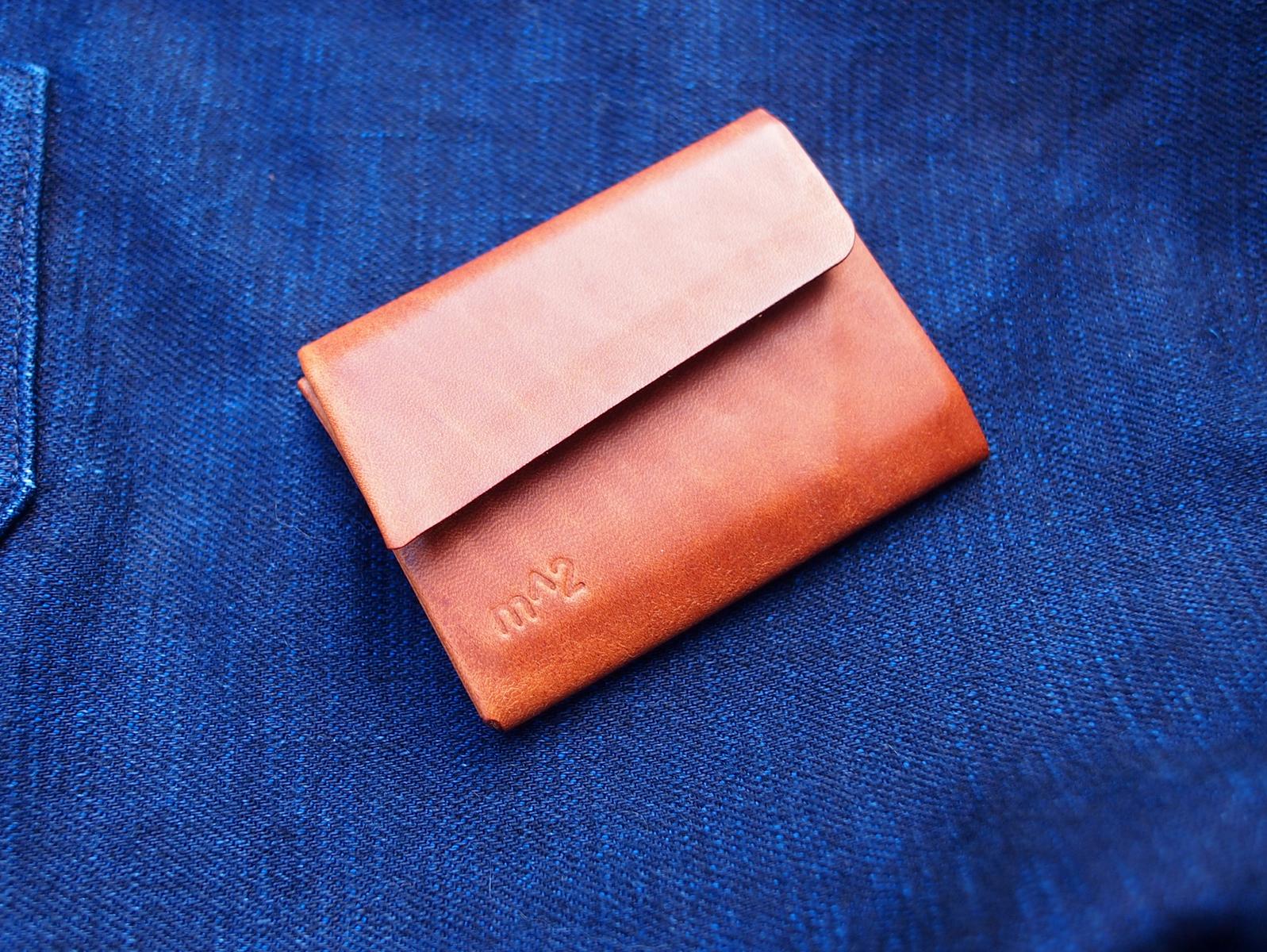 The cutting of this single piece pattern is incredibly precise, of course, and this precision is absolutely required in the next step, where the leather is folded – origami style – into the thin but complex layers you see below, thus forming the various slots and compartments of the SW. 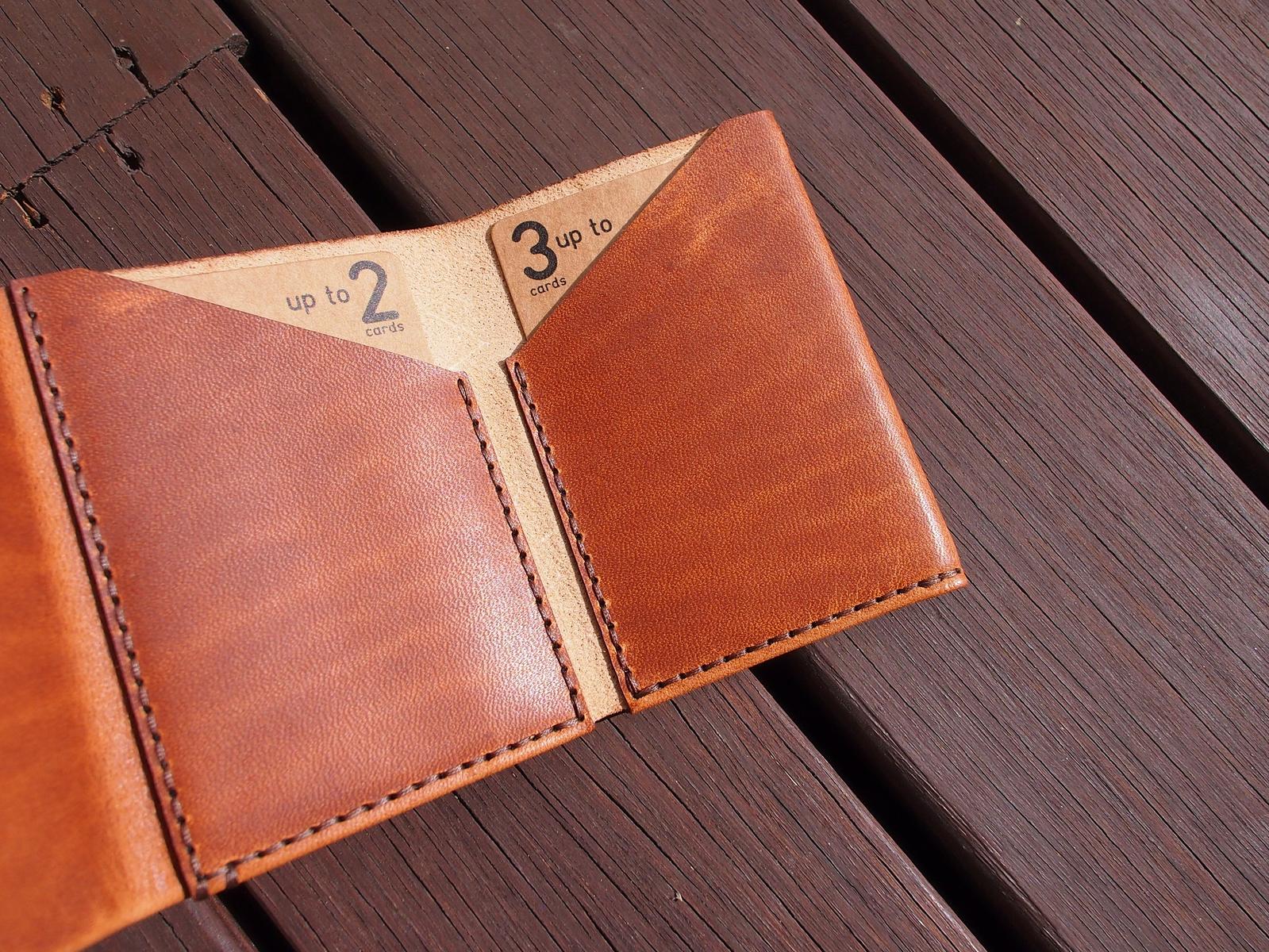 The fact that the final result, seen here, is symmetrical and matching means that not even a millimeter of error can be made from the very first step.

The end result, despite its minimalism, is quite remarkable from a technical perspective. 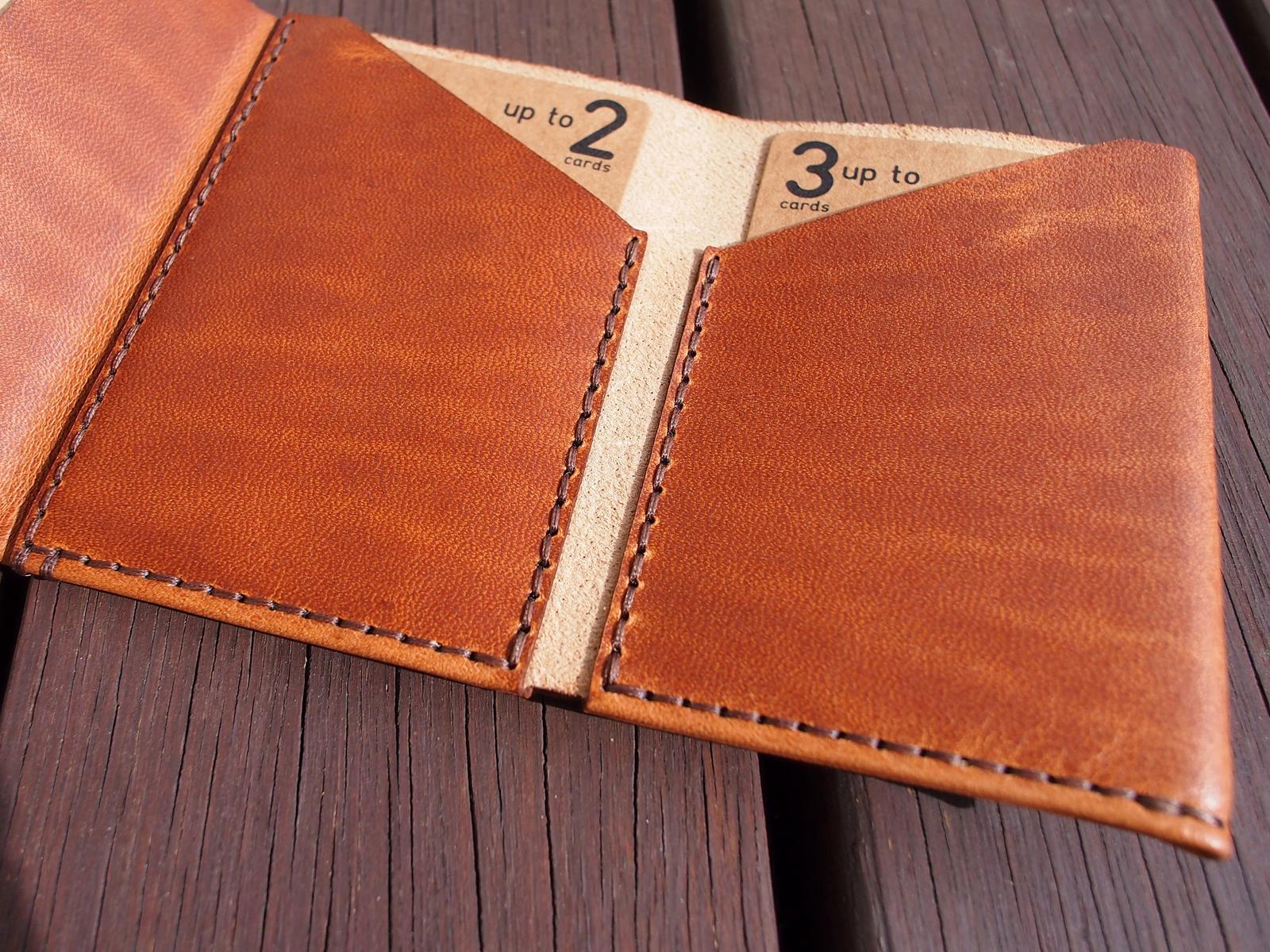 Stitches have been sewn at 6 SPI.

Overall, very straight lines and neatly stitched. There are six thread colours to choose from, and I’ve settled on the tonal brown stitch. 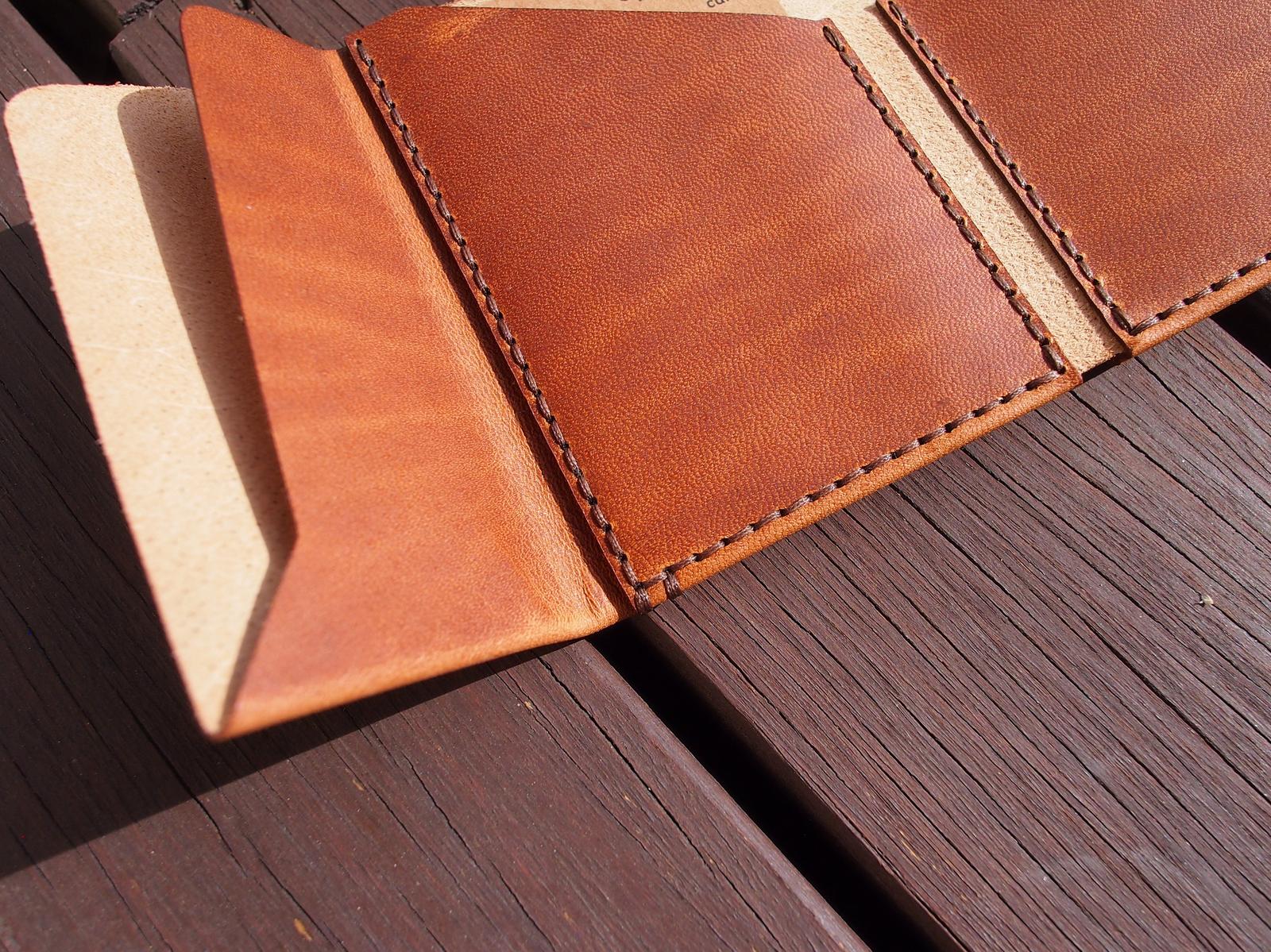 The folded edges end up on the same side, whereas the opposite end consist of the open edges. The leather has been laser-cut, so the open edges have a particular ‘burnt’ edge that comes with this high-heat cutting process that doesn’t require further burnishing. 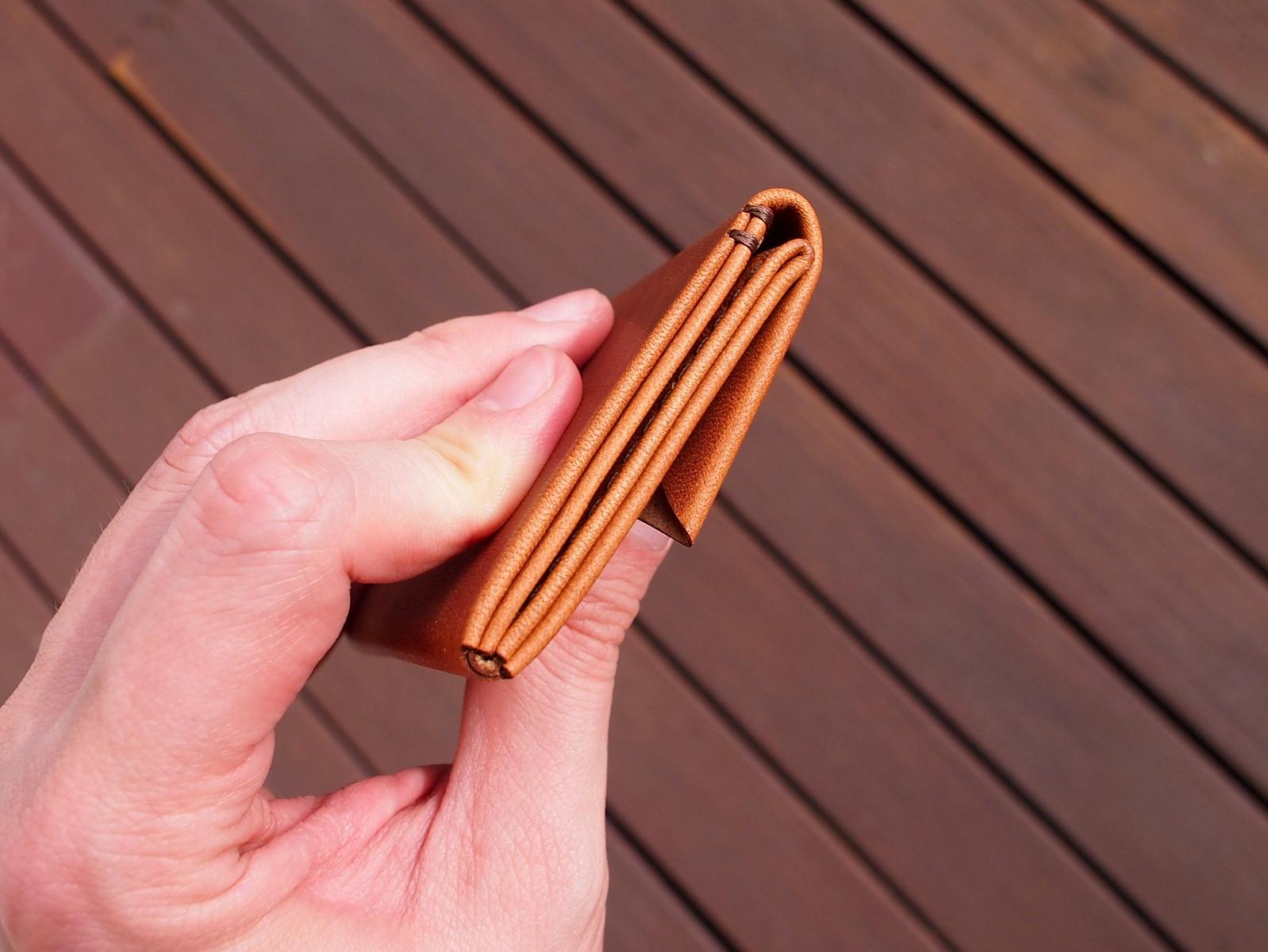 After using the wallet for a period of time, I’ve come to appreciate that the various edges and corners on the SW all contribute in someway to the end goals of user friendliness and minimized volume.

While simple in appearance, from concept to crafting, there has been a deceptively large amount of effort invested in a very small wallet. 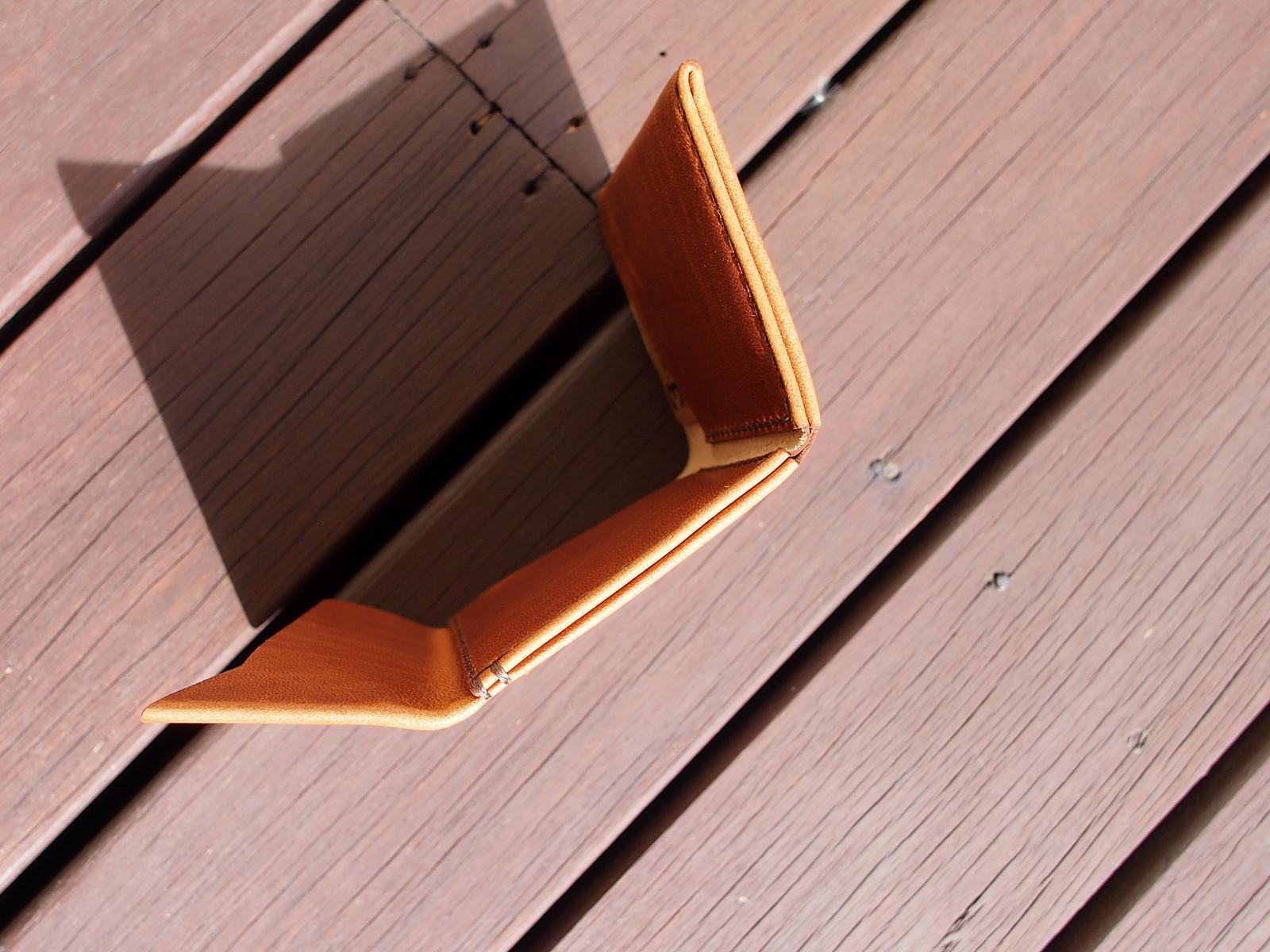 Certainly, not just another card wallet. The SW is very precisely made, and despite the relative simply appearance at first glance, the construct is much more complex compared with traditional wallets and it is quite clear on close examination that every little detail has been carefully studied and applied.

I am certainly very impressed by the design concepts and precise make of the Slim Wallet from minimum squared.

It is my smallest wallet by far, even smaller than some of my card-holders, and yet the capacity is that of a full-sized billfold. The engineering and crafting considerations that’s been injected into the SW is certainly much more refined and complex compared to most other wallets. 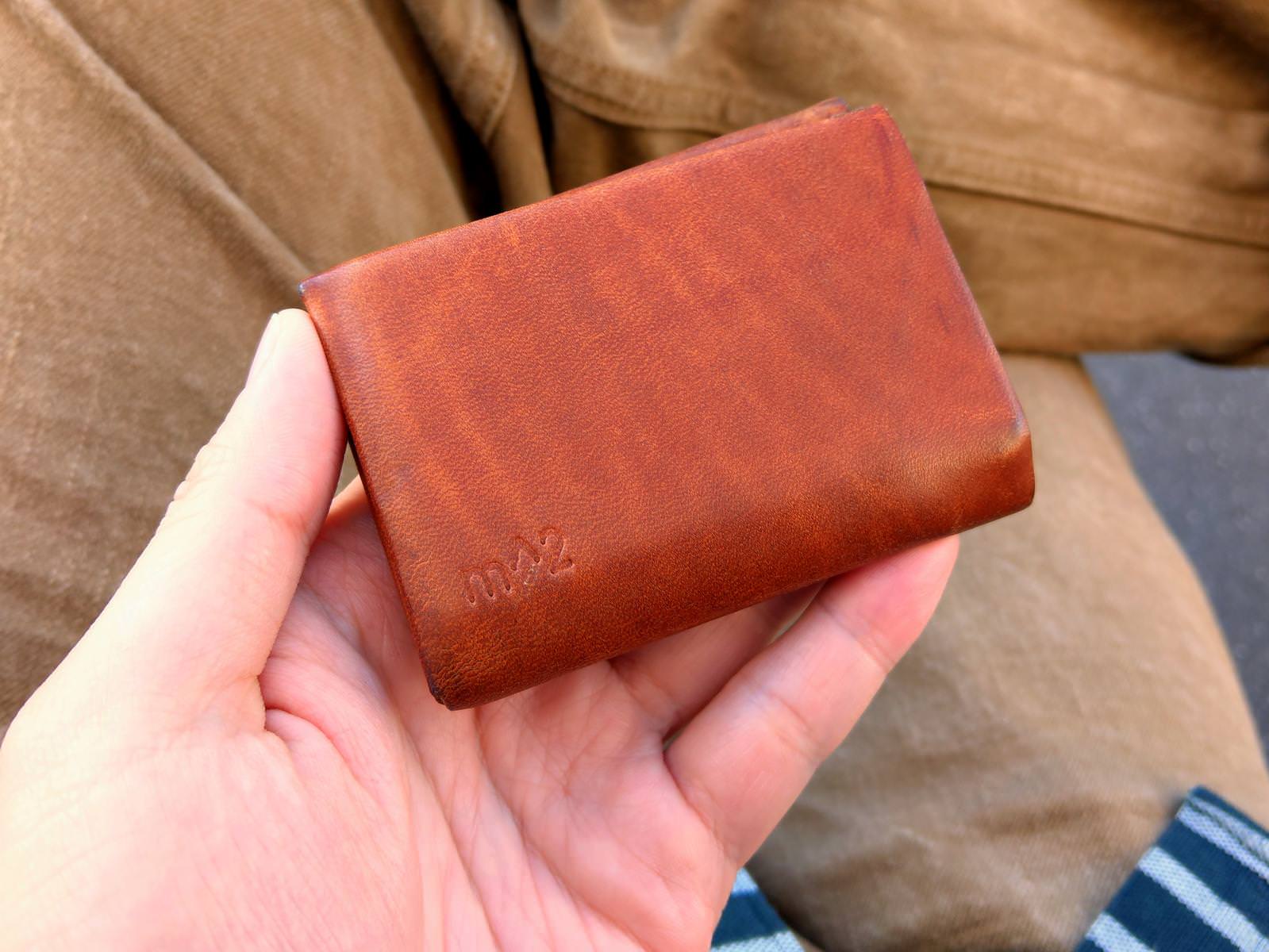 The SW is not a work-wear wallet though.

While there is no strict definition or inclusion/exclusion criteria when it comes to work-wear leathers, the SW’s novel design, overall small size and very thin leather utilized does mean that guys who are into Americana or early century work-wear won’t be very interested in the aesthetics here. By design it is small and light, and yet for followers of rugged styles the insubstantial nature of the SW is the biggest drawback.

That being said, there is a new breed of denim fans out there: dudes who are into modern cuts and clean, sleek silhouettes. The SW could be a great choice if minimalism is your cup of tea.

Of course, for guys who wear formal clothing nine to five, the SW fits perfectly into your jacket’s inside pocket and won’t distort your lines. It would be a great wallet for travelling, sporting or hiking too. 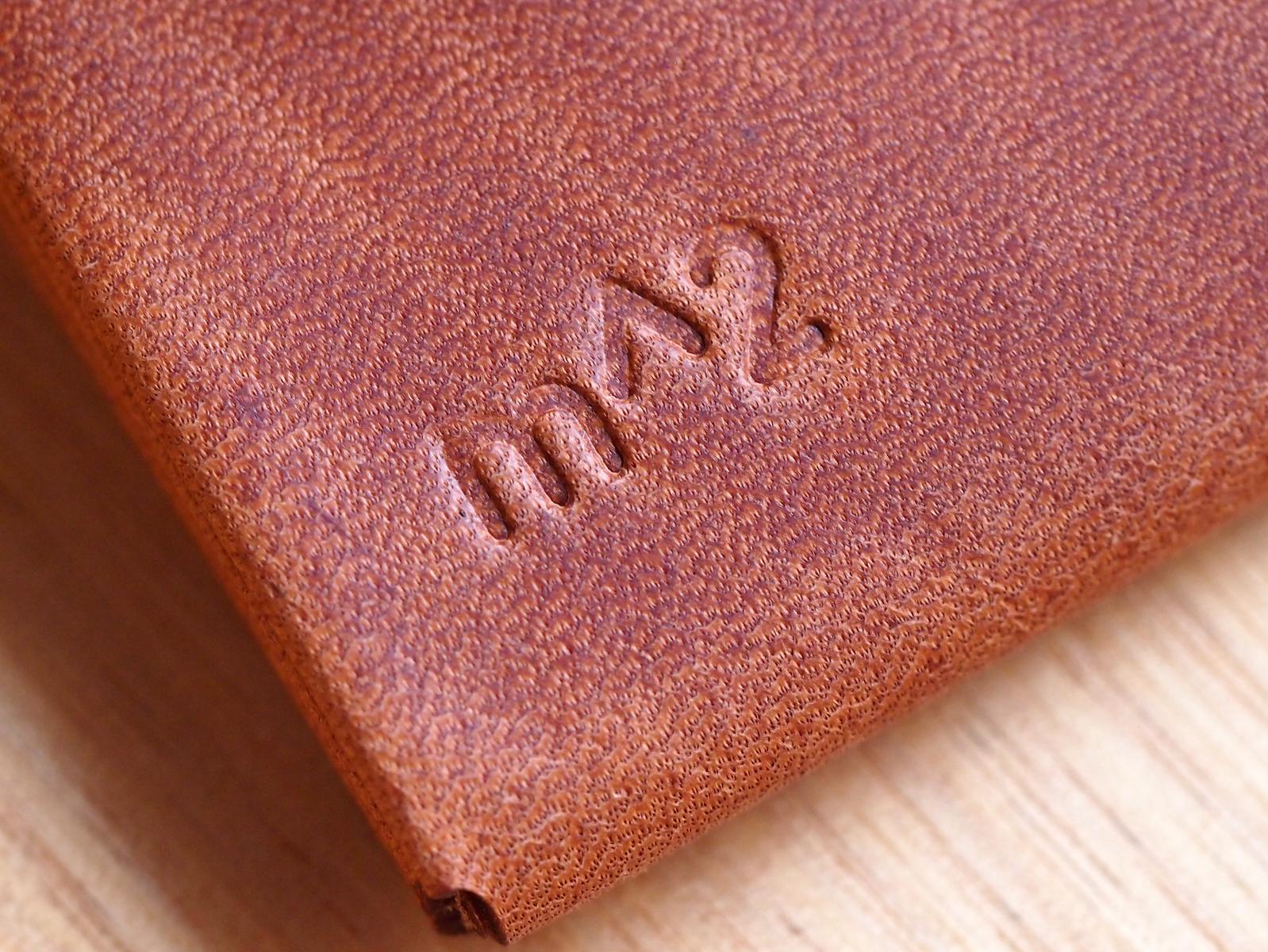 From a leather or carry-good geek’s perspective, the SW is a great addition to any collection, occupying the “smallest & lightest” niche when it comes to wallets. The materials and crafting featured are on point.

At 165 EUR, the SW seems a little pricey relative to its size – most card holders of similar size are under 75 EUR – but do keep in mind that the SW is, in fact, a true wallet rather than a simple holder. Further, as explained in the body of this review, the amount of work that is invested into each SW is pretty insane.

All in all, a very interesting addition to my vault of wallets. The SW is certainly like nothing else I’ve ever used, with the design and execution being uncommonly precise. This minimum squared wallet is a very unique piece that I’ll continue to carry when I want to travel lightly.

Check out more of Adrian and Sanela’s work on their m^2 website!