Crafting out of Seattle, USA, Jiten Amin is relatively new to the leather scene and has just branded his Waxwing Leather workshop, but I’ve been hoping to check out his work for some time now.

I started following Waxwing Leather’s IG account at some point last year. The first time I saw Jiten’s photos I noted his crafts had a certain charm which drew me in – his bifold wallets, in particular, I thought were very unique and rather beautiful. 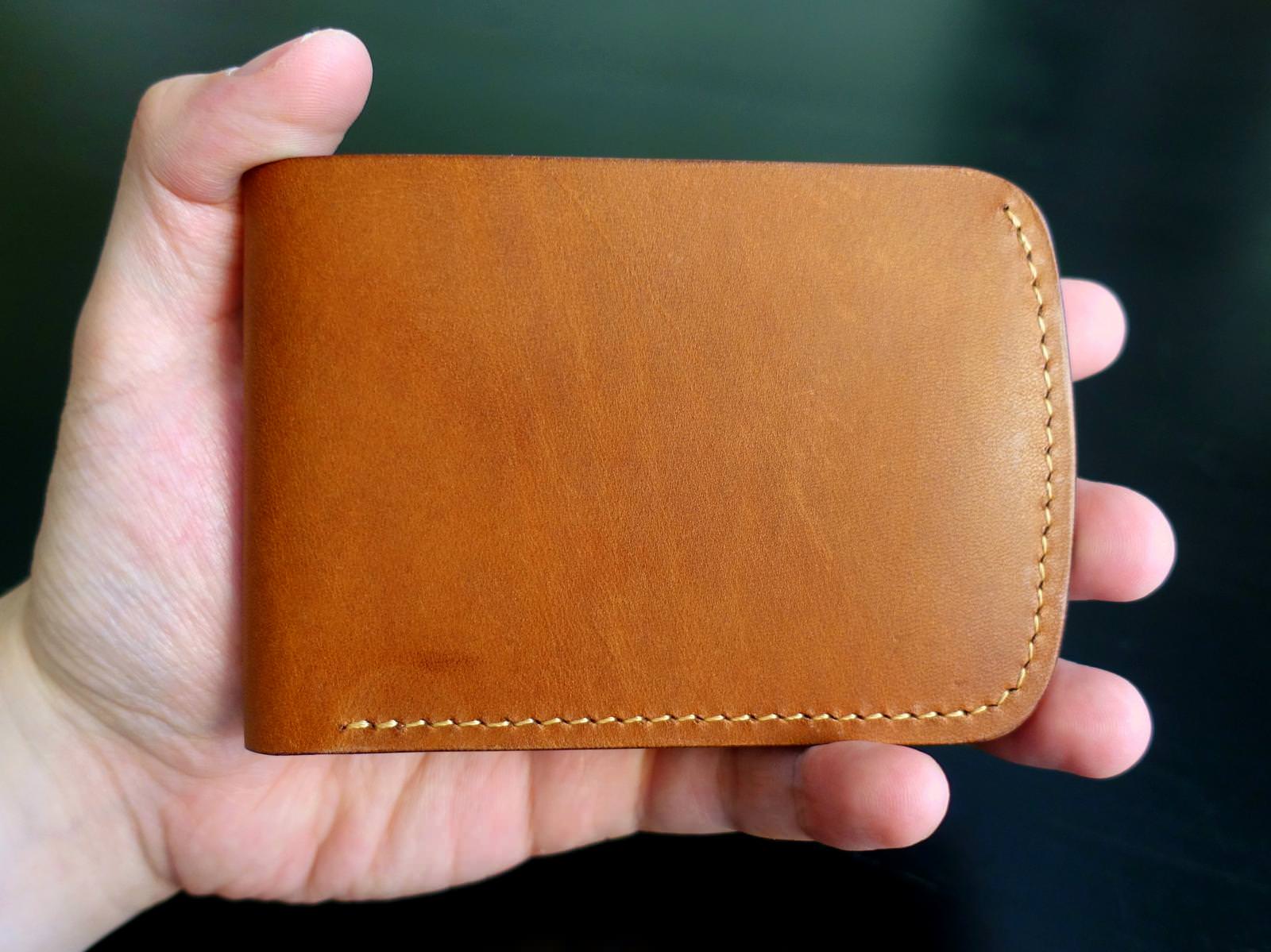 After a couple of months of materials selection and tool upgrades, Jiten sent along this fantastic little guy – the ‘classic’ bifold. I’ve been able to test the wallet out over this month, and I want to share with you some of my thoughts about Jiten’s work.

This wallet is a traditionally sized bifold, built to work-wear levels of sturdiness.

Fitting easily in the palm of my hands, this bifold is designed to carry a moderate amount of notes and cards. 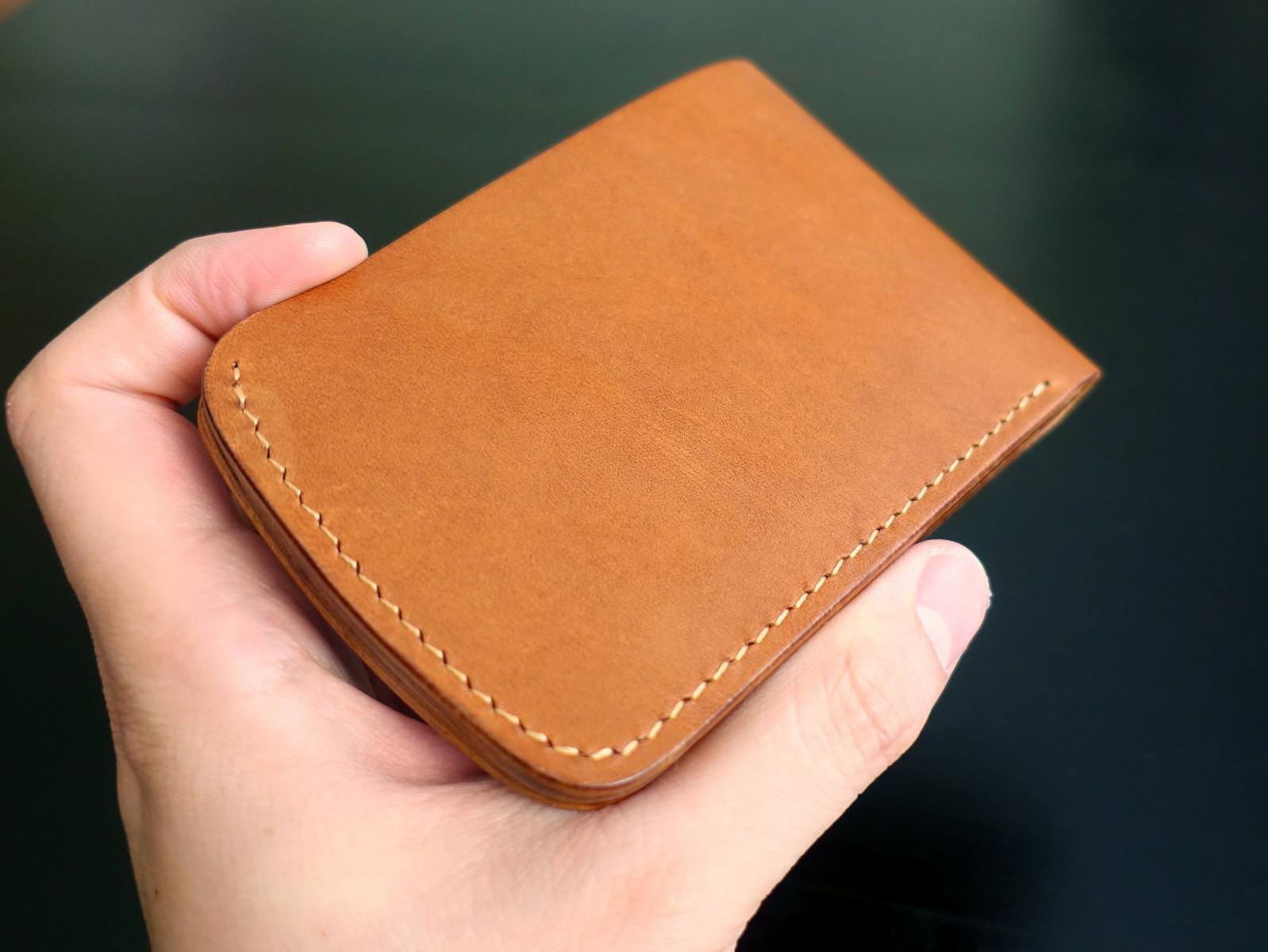 When folded, this wallet measures approximately 12 cm in length and 8.25 cm in width. 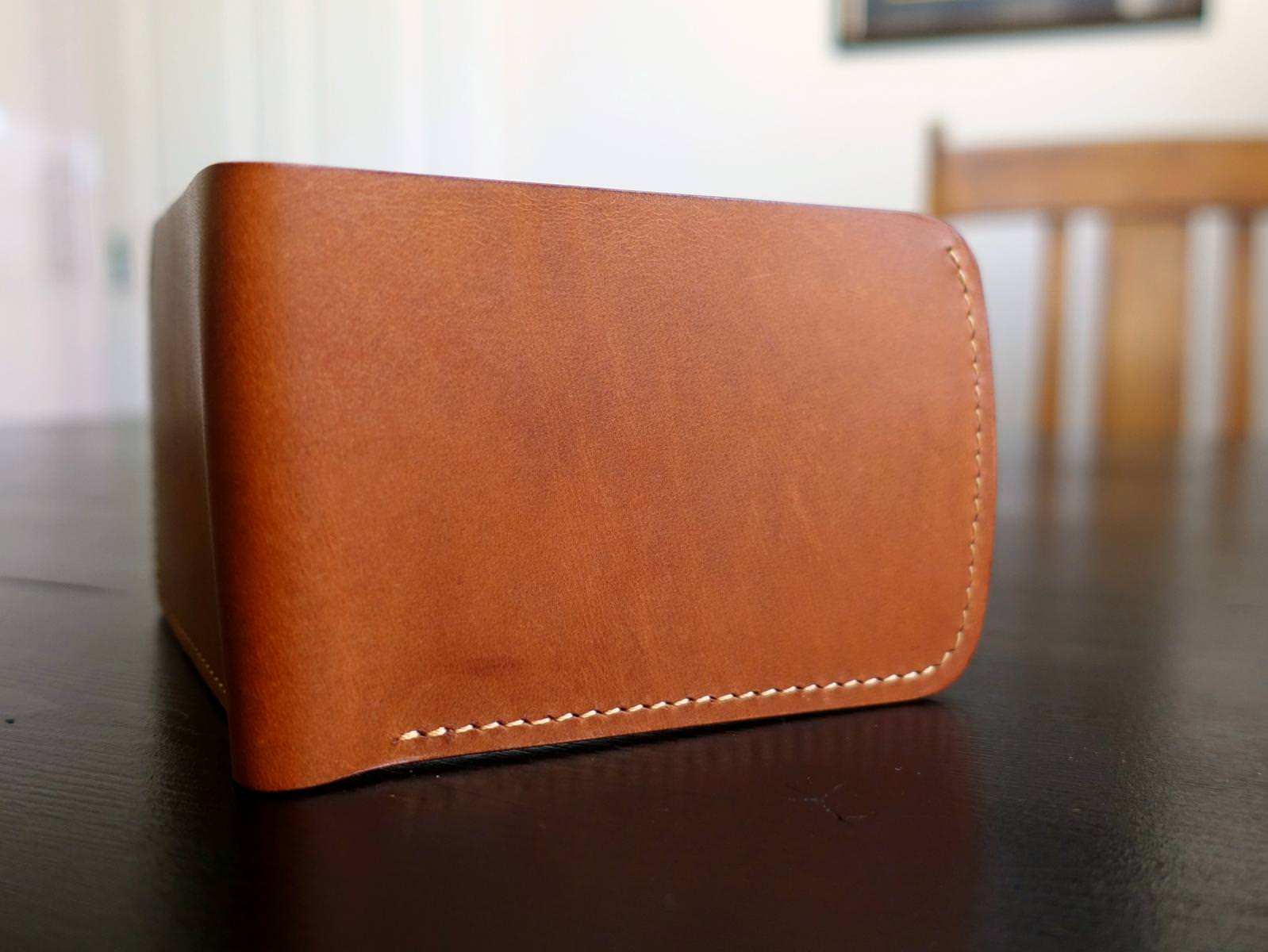 The appearance is fairly minimalist, the outer featuring only one set of stitching along two edges on each side. 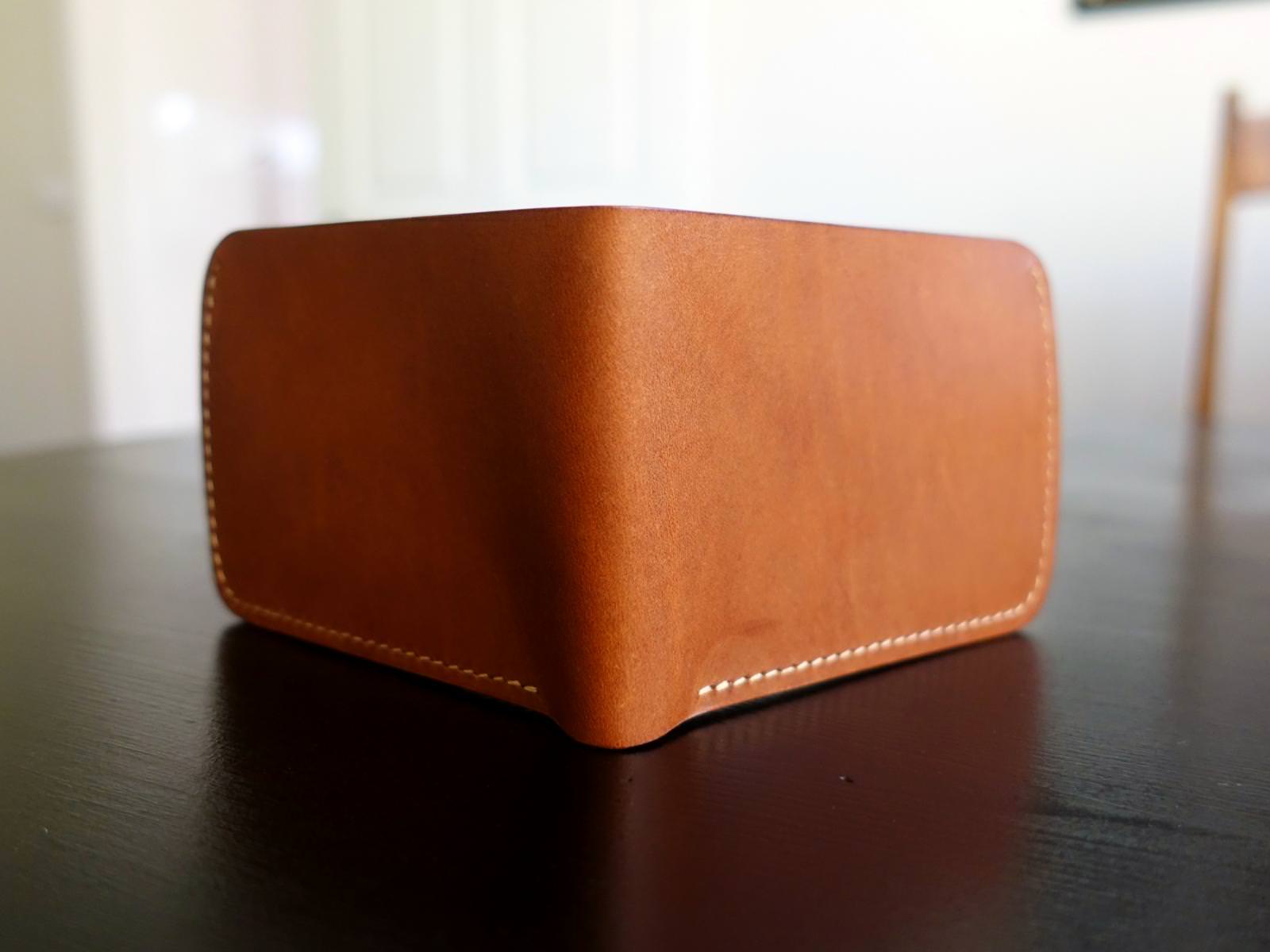 The basic rectangular shape is supplemented by curved corners and a curved outer edge. 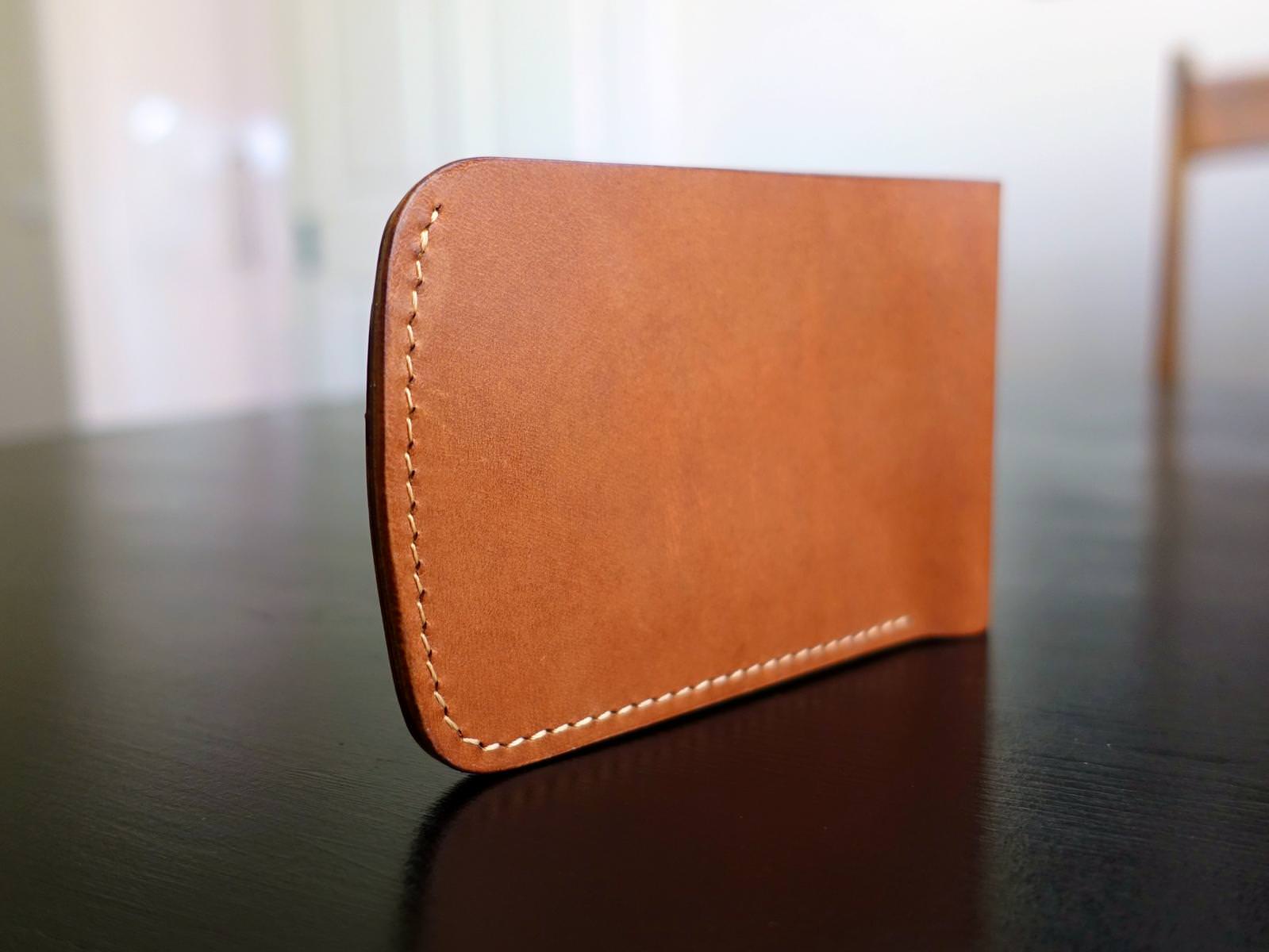 This wallet is curvy indeed, and the inner layout and design is perhaps my favourite aspect of this wallet, and one of the nicest I’ve seen on a bifold. In fact, there are only two angled corners in the entire wallet. 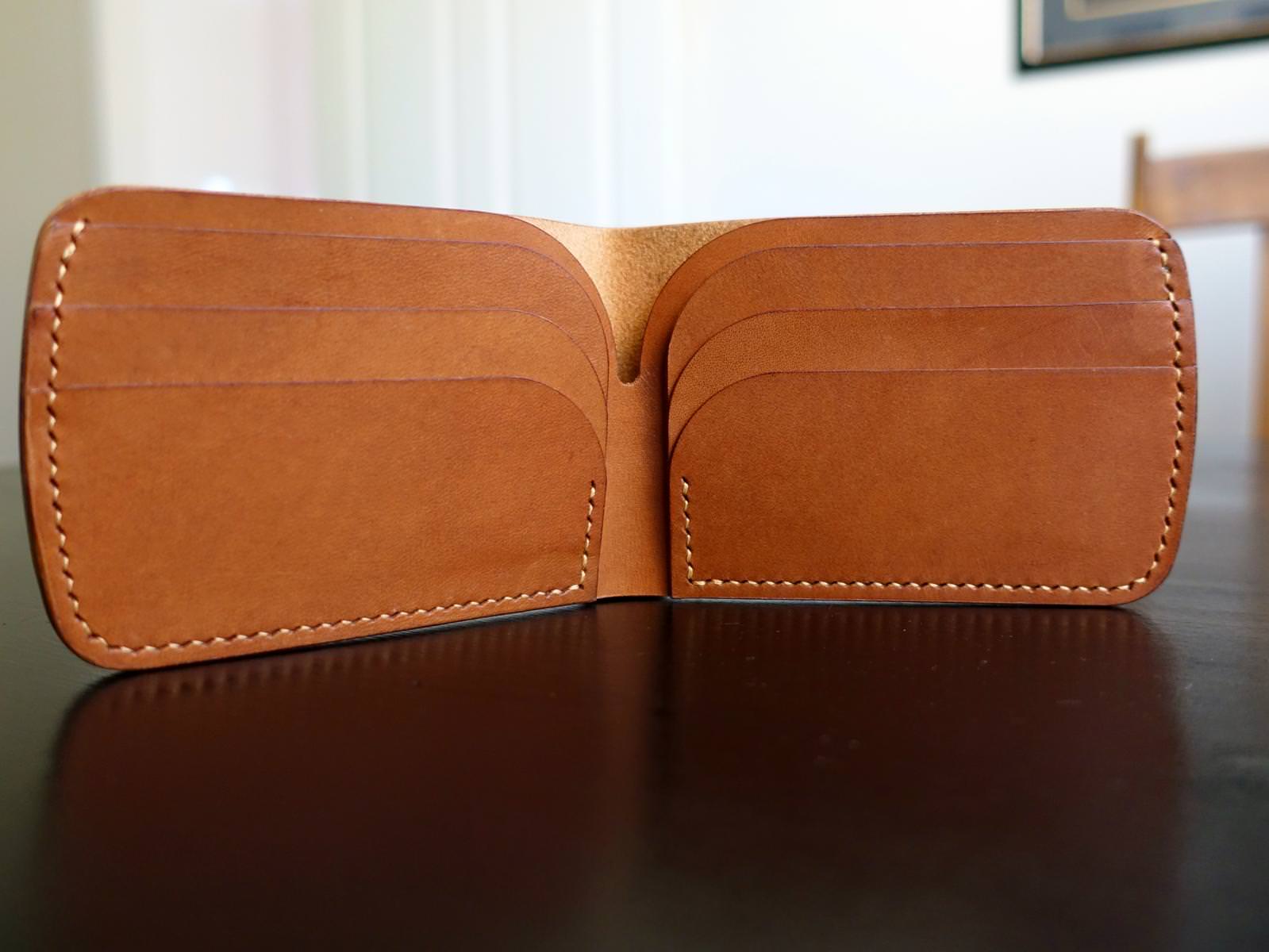 The bill compartment will fit any notes comfortably. It is unlined. 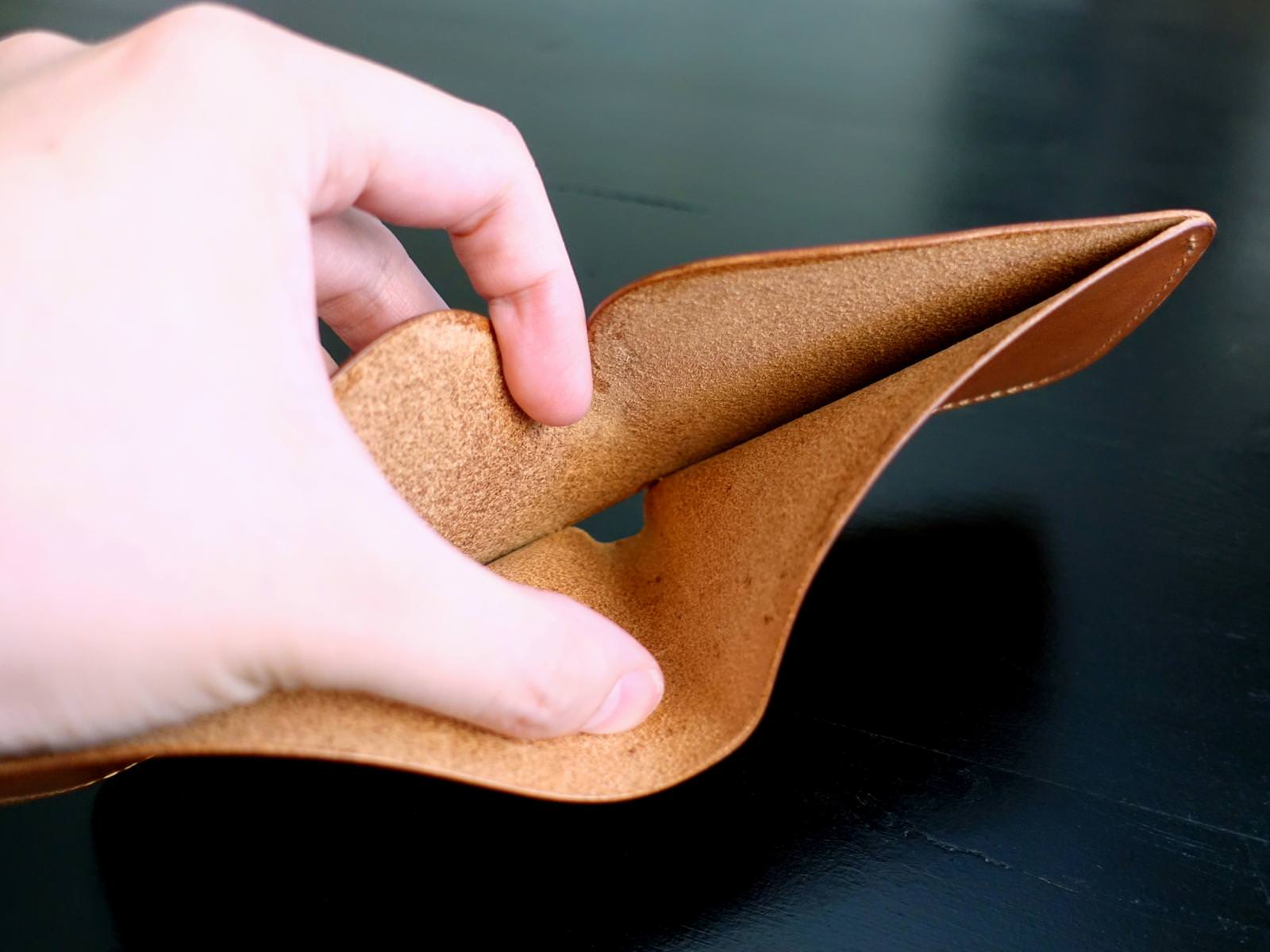 I measured an average thickness of approximately 1.3 cm when loaded.

Certainly, this classic bifold is not a slim wallet, but also not too hefty either. Carried in the back pocket, I barely notice its presence. 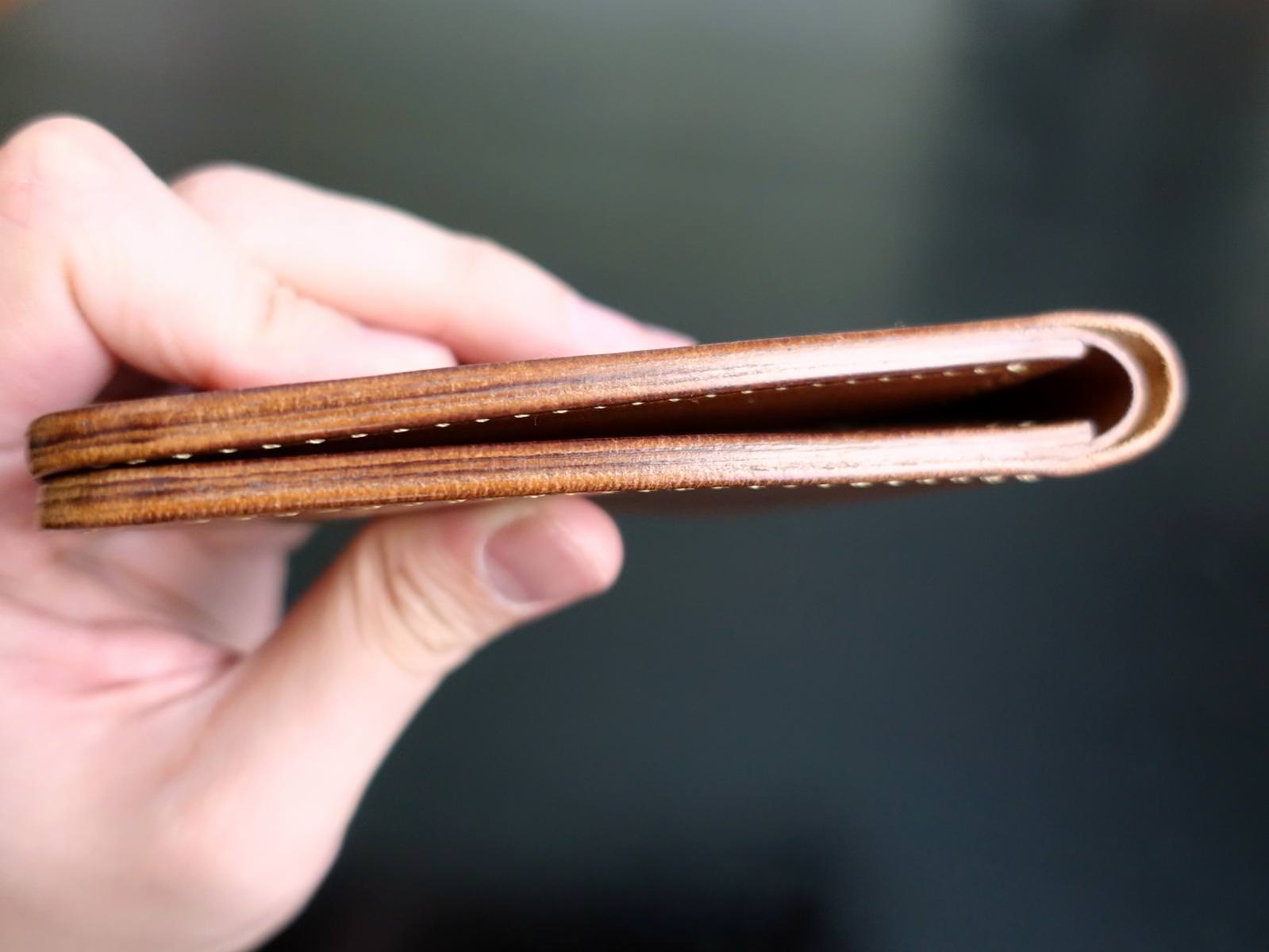 Overall, the design is symmetrical and relative minimalist, though the very nice curves do add a lot of flavour and uniqueness to this bifold.

In terms of the practicalities of everyday wear, this wallet is user friendly and rather easy to carry & use. 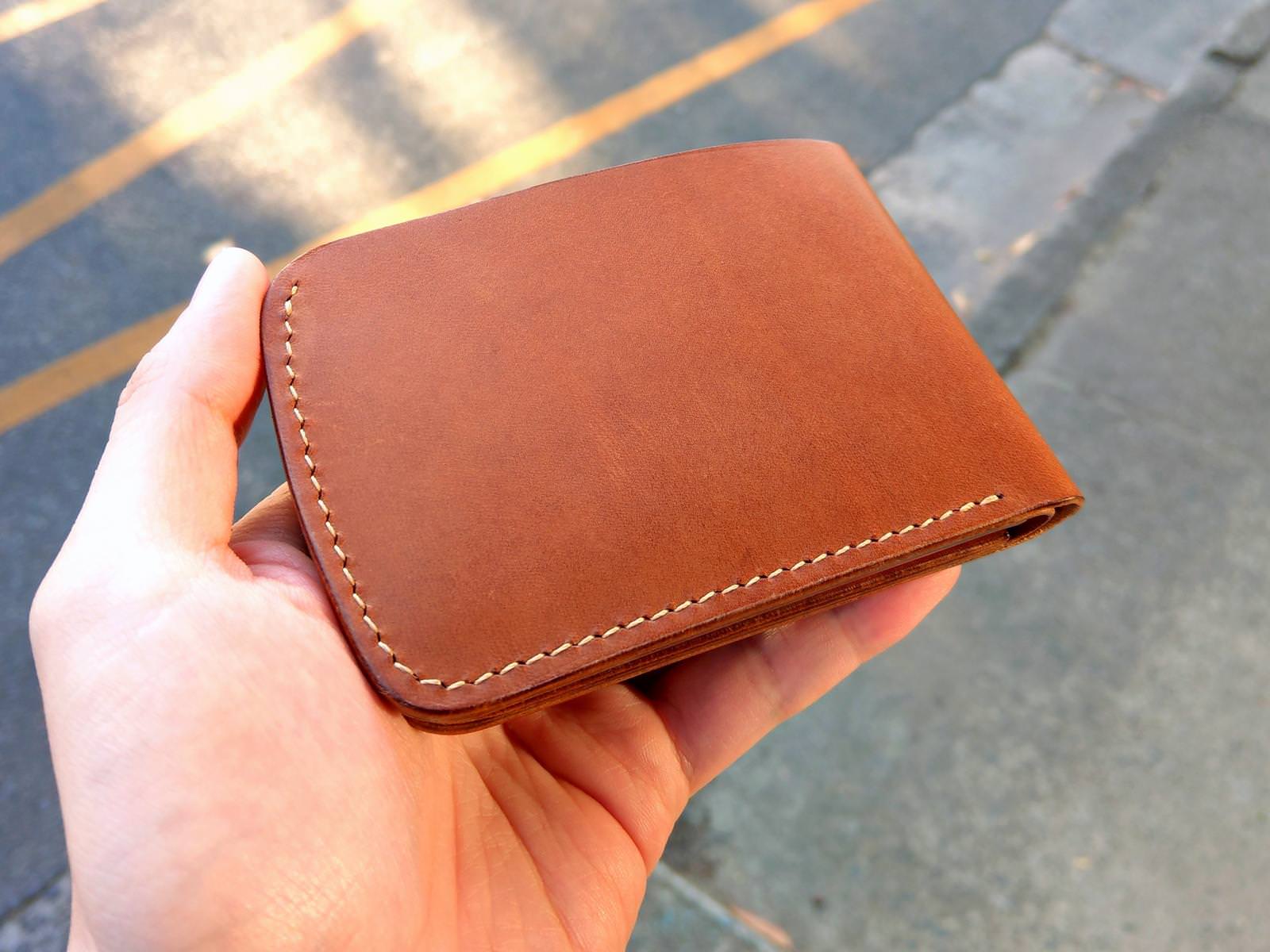 It is true that it’s hard to screw up a bifold unless one were to introduce really weird elements to the inner. What is difficult, however, is to produce a good looking bifold that is interesting to look upon. Jiten’s design is notable as it allows quite a good carrying capacity for a medium sized bilfold without sacrificing aesthetics.

With only four cards visible when fully loaded, the visual emphasis is very much on the accent panels, and thus the leather is featured nicely. 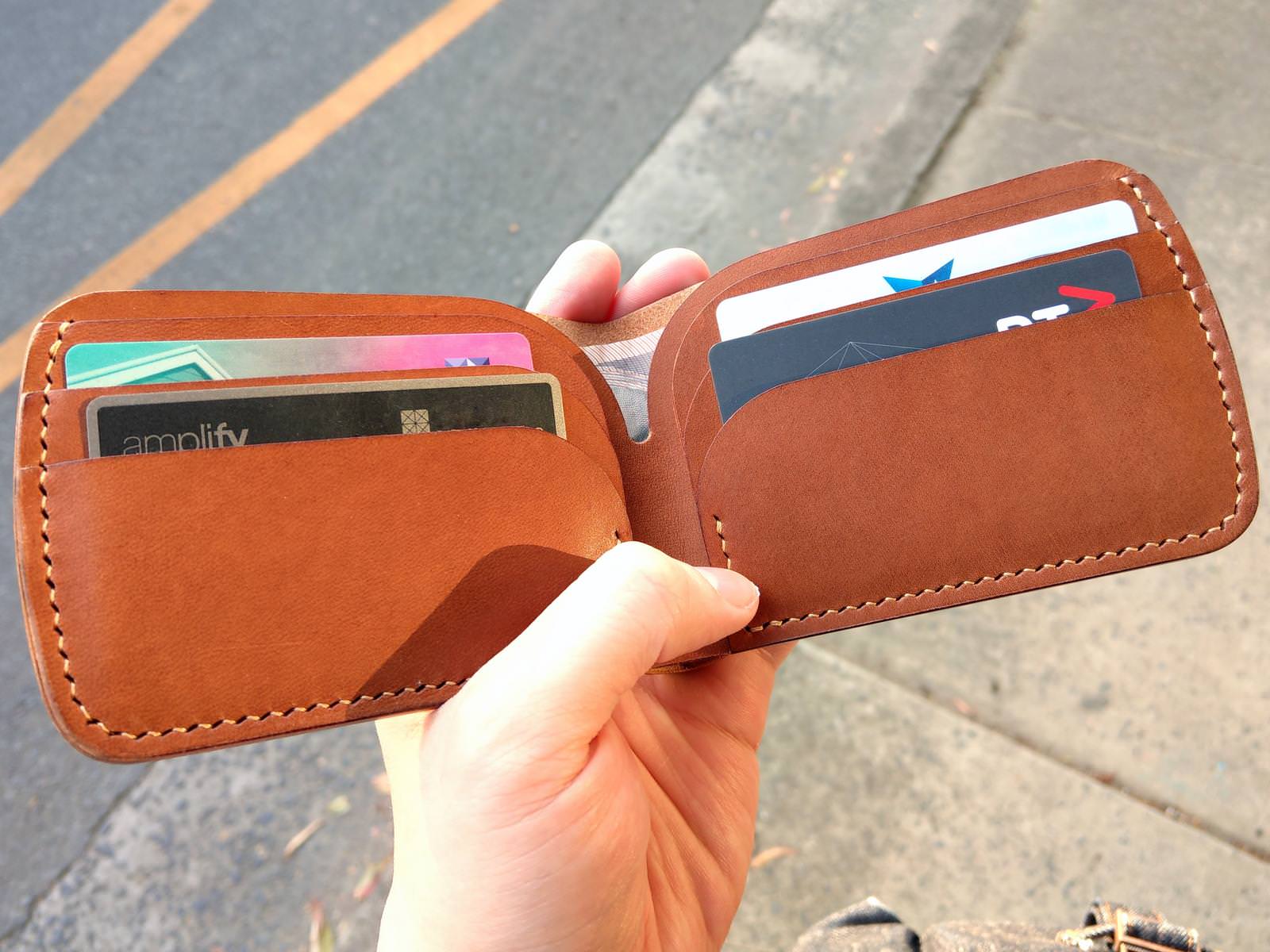 The card slots are sized generously, so each quick access slot can potentially take in up to 3 cards. The storage compartments can hold a bit more too. I usually carry between 6 to 8 cards, so this wallet more than sufficiently meets my needs – this bifold will hold a dozen cards without losing shape.

The leather that Jiten has utilised for this wallet is Badalassi Carlo’s Minerva, in the Liscio (smooth) finish and Noce (walnut) colour. The Minerva is my favourite Italian vegetable tanned leather so far.

You might have read about the Minerva on my blog in the past, but here’s a recap if you missed it – and so I quote myself:

“Badalassi’s Minerva leather is their top of the range vegetable tanned, full grain leather. It is hand-dyed after tanning, and finished by hand-stuffing with a currying mix containing high amounts of neatsfoot oil. The result is a leather that has a brilliant but natural colour and a fine grain, with the character of the hide on full display. The ‘Liscio’ (‘Smooth’) version is featured, instead of the ‘Box’ version (where the grain is shrunk post tanning).

The hand is smooth but not slippery, with moderate rigidity when new. The oil content appears to be medium to high.” 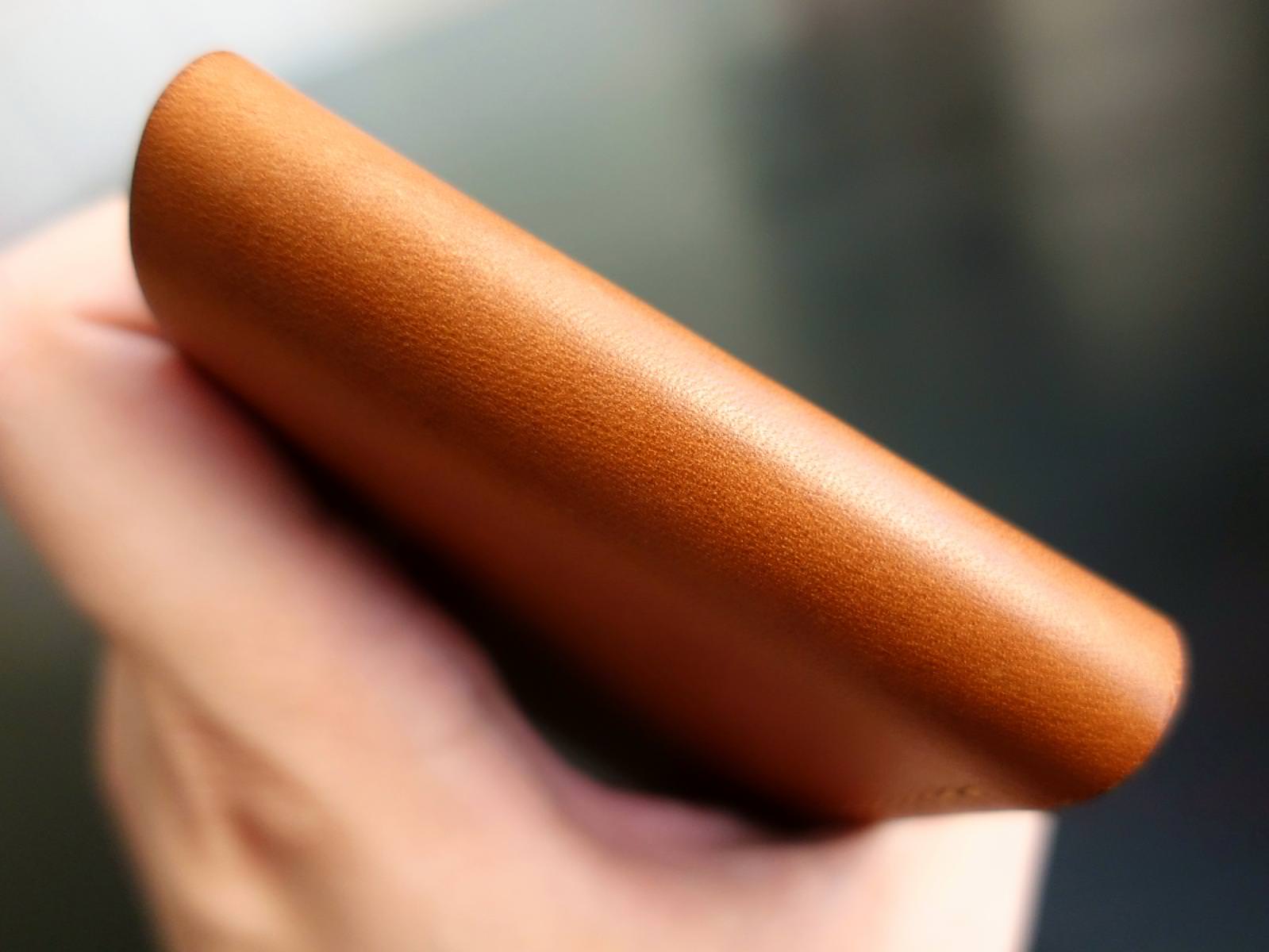 It has a softer, more fluid temper compared with other similar vegetable tanned leathers (Buttero, for example) – this does pose design and construct challenges, but allows for the utilisation of greater thicknesses in the wallet without sacrificing comfort.

I measured the thickness of this leather at 1.30 mm, or ~ 3 oz, uniformly throughout the wallet. 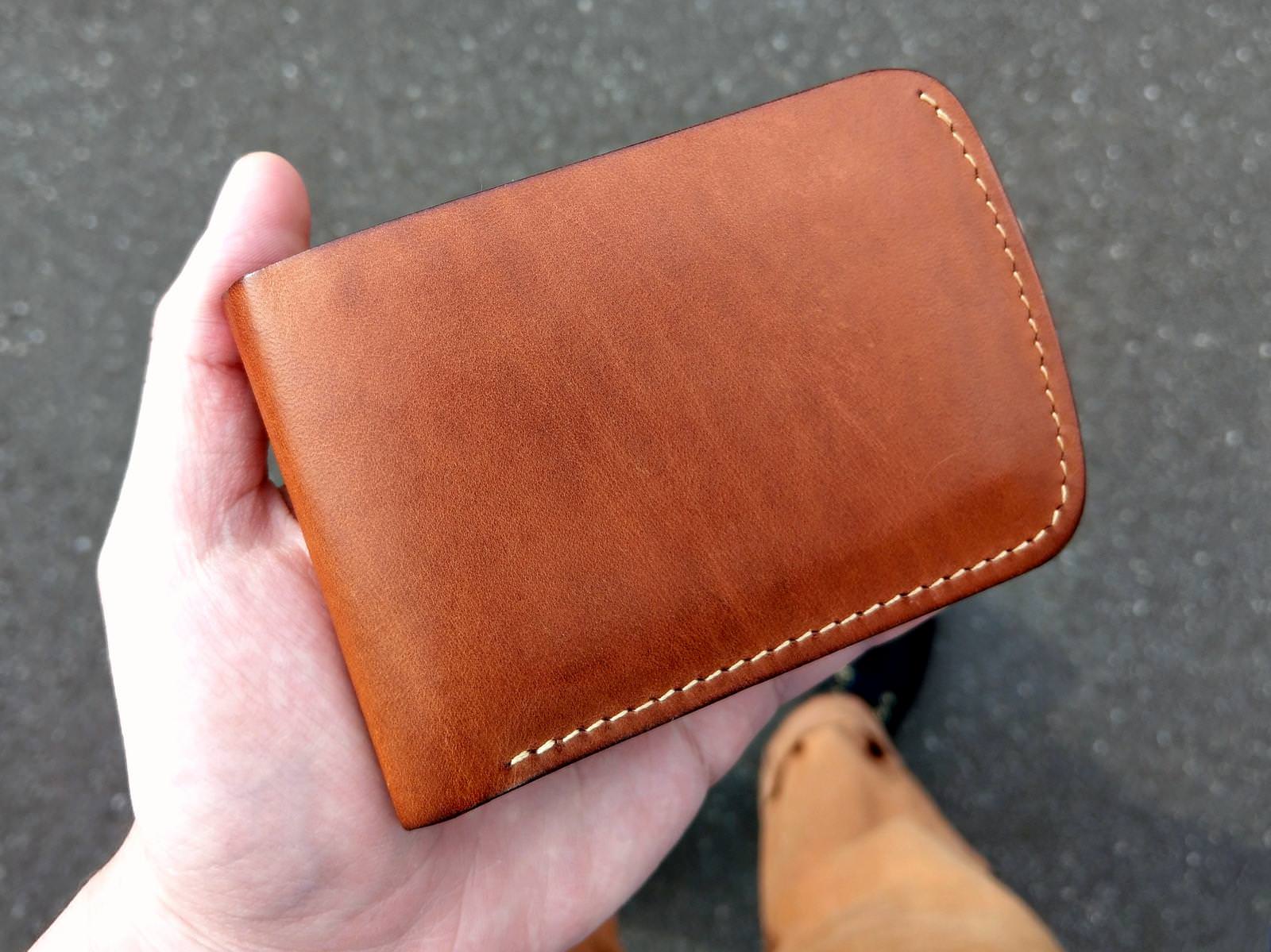 Buttero is perhaps a little more popular than Minerva, but I do prefer Minerva’s handfeel and evolution. The photo above shows the leather after 3 days of use, the colour already darkened somewhat and the lustre increasing.

For a young craftsman, Jiten’s work on this classic bifold is pretty spectacular, I must say.

I am very impressed by how neatly he has cut and matched the individual panels. Also, the consistent spacing of the stitching even along the curved edges is remarkable. 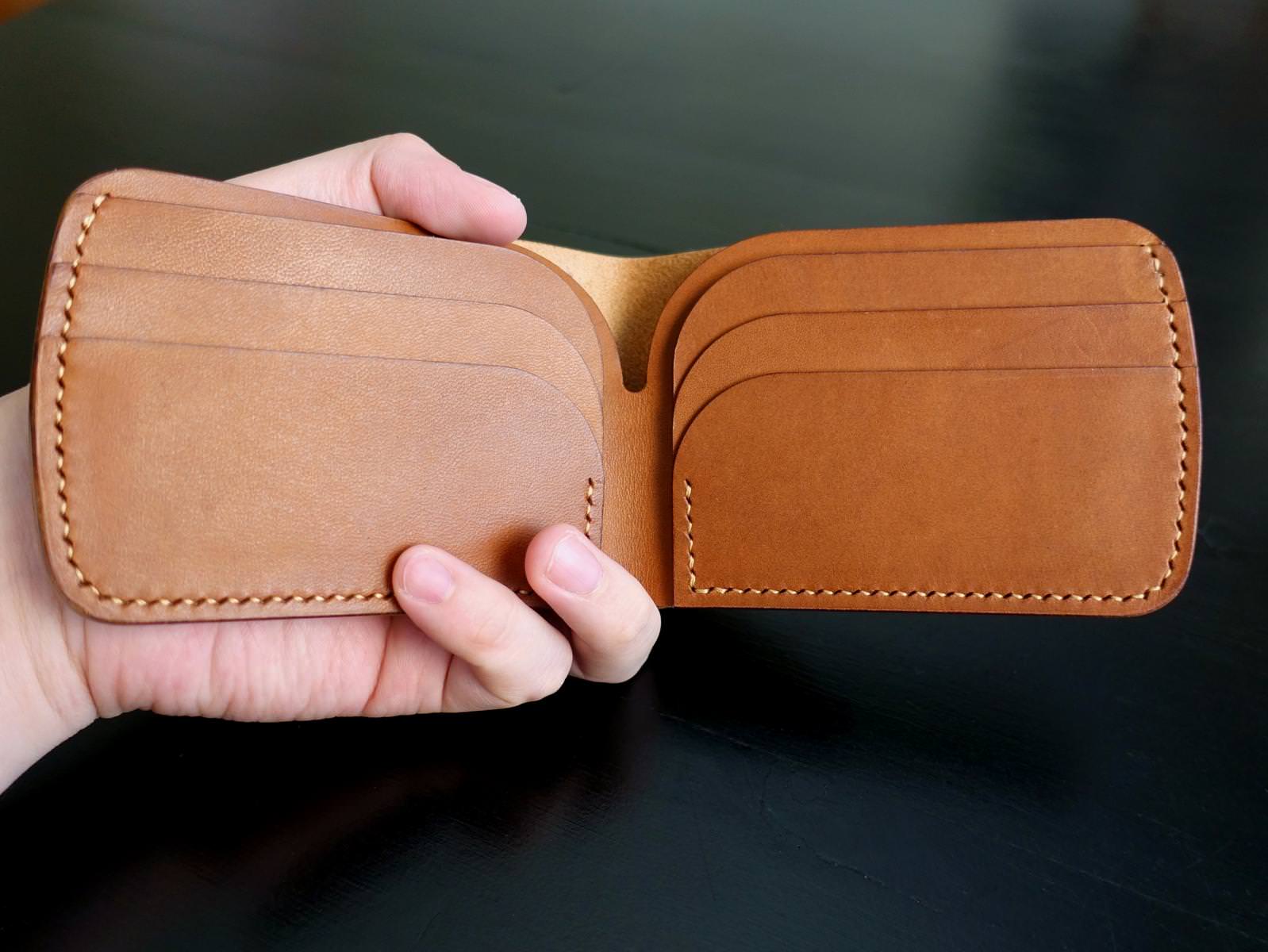 Vinymo polyester threads via Japan has been saddle stitched at 7 SPI.

The stitch work is neat and clean, with the tonal thread colour complementing the leather and overall design. 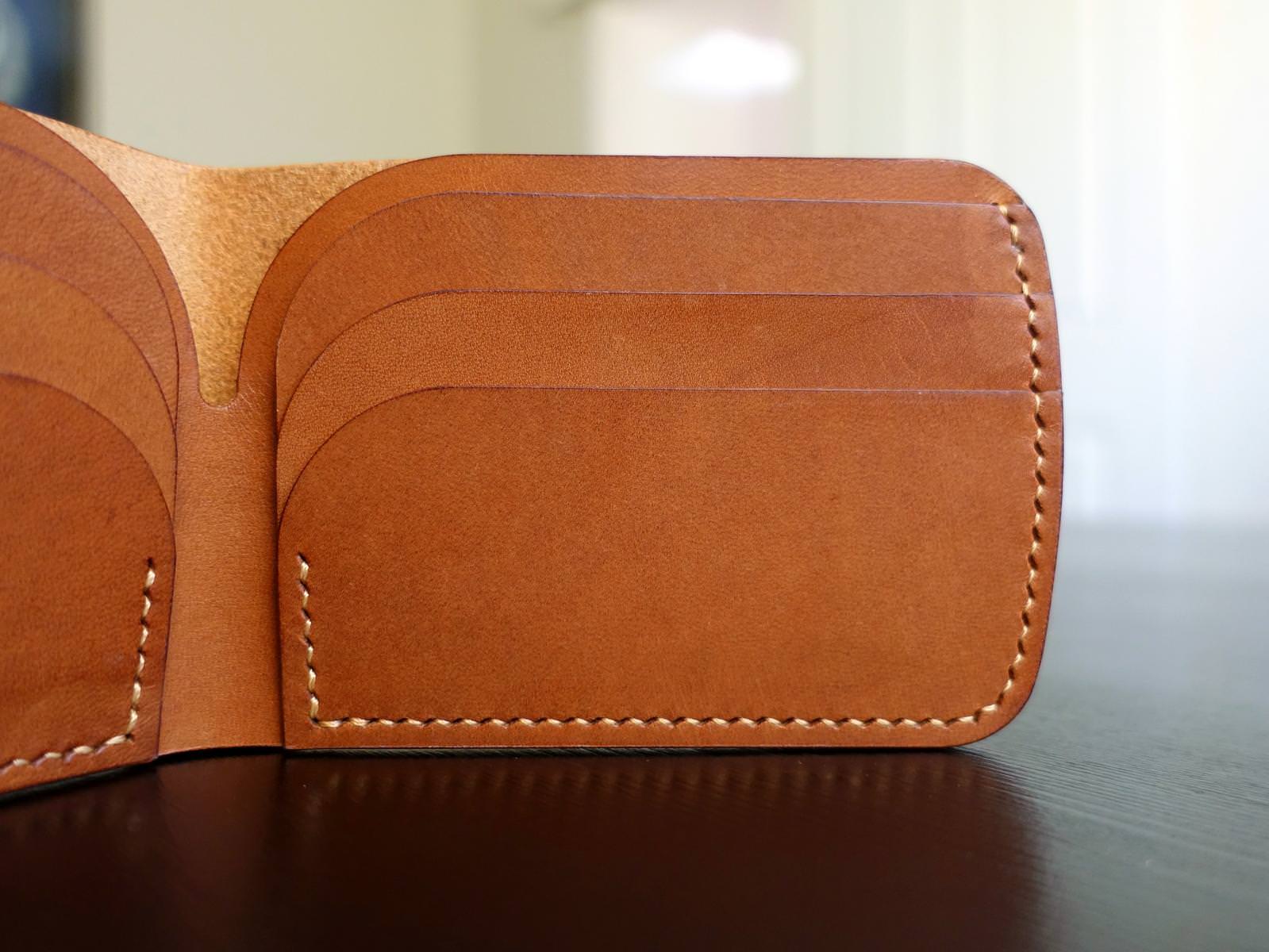 Again, the consistent stitch work along the curved edges is testament to the concentration and effort invested into this wallet. 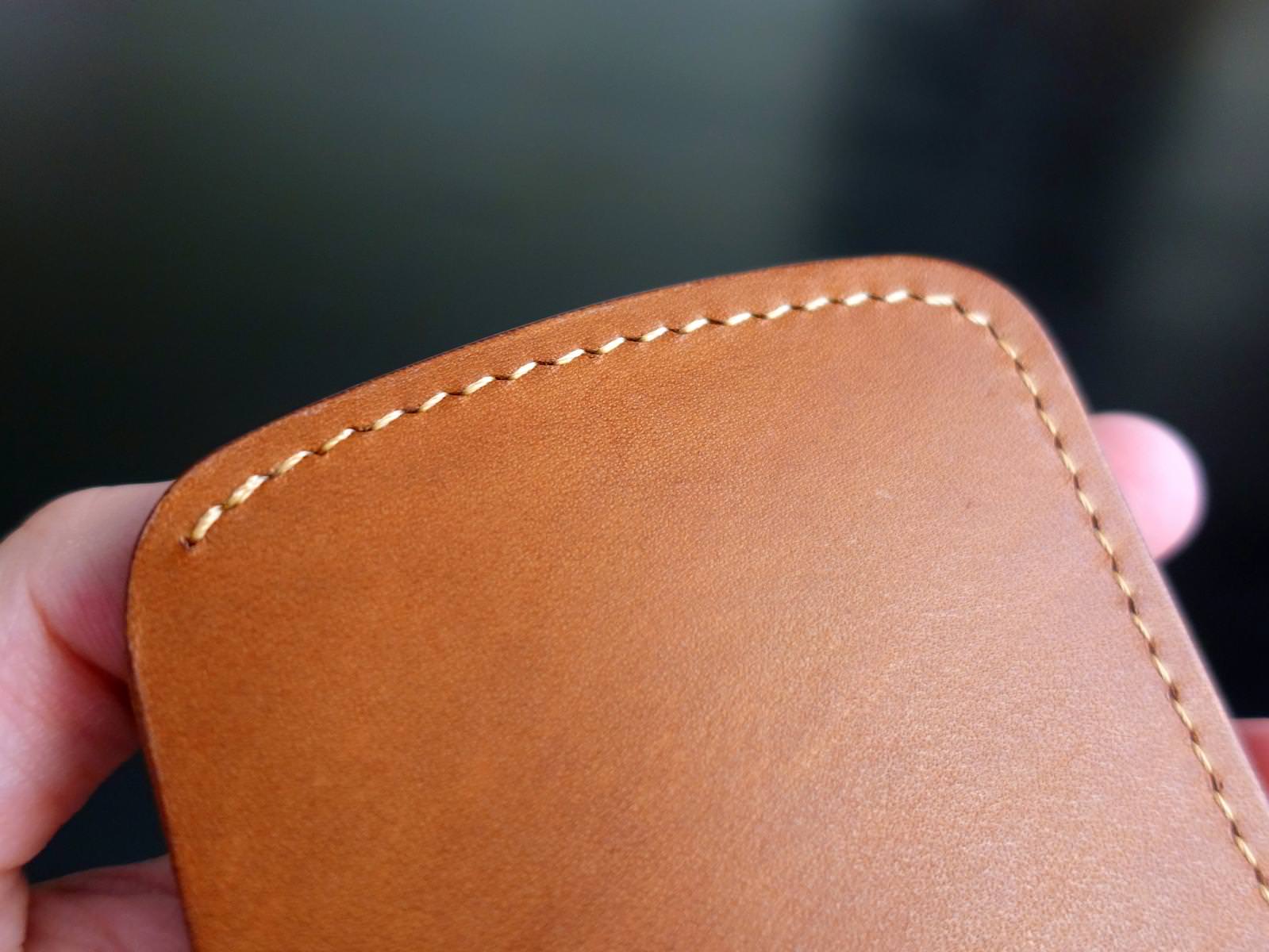 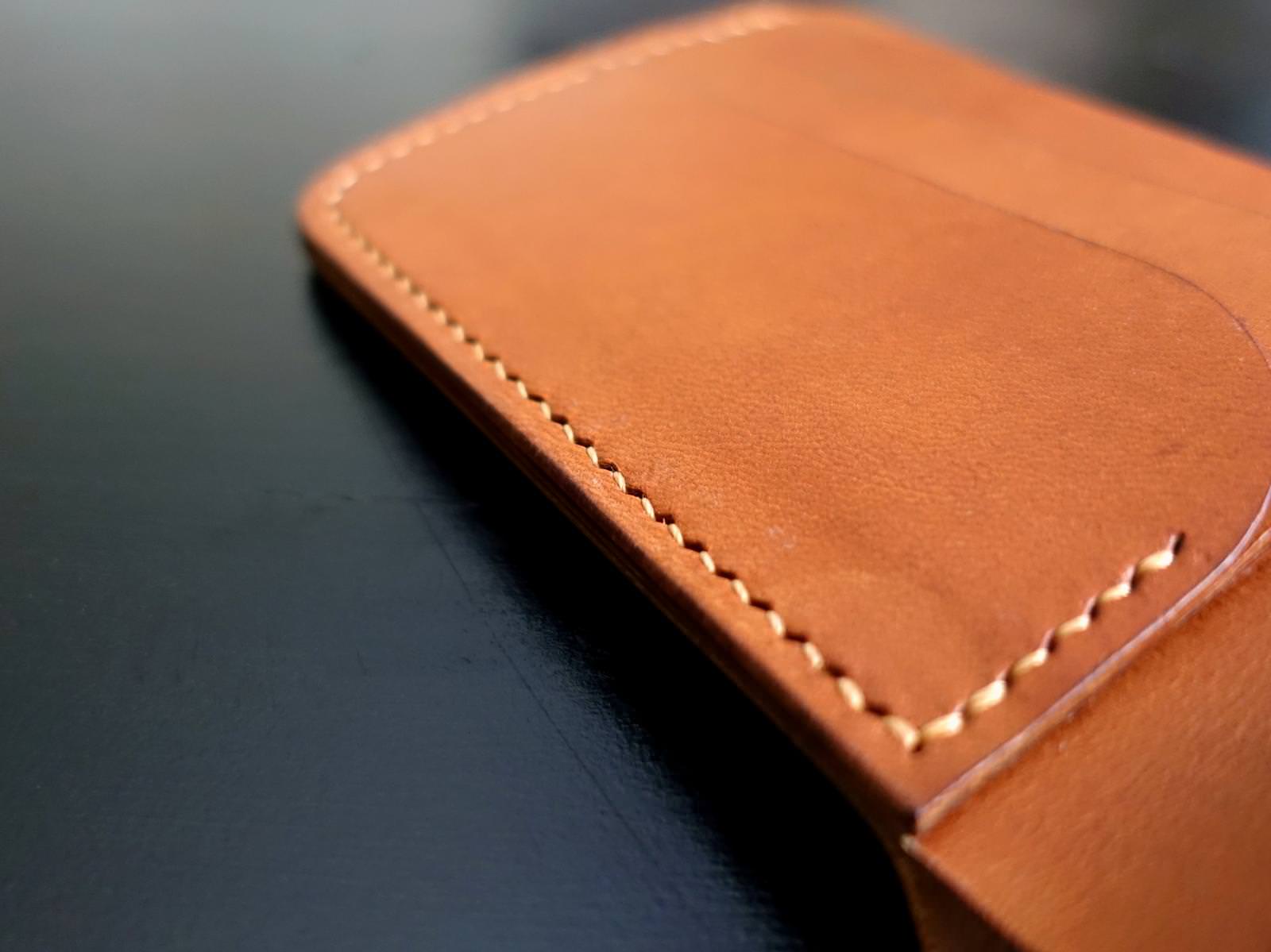 The cutting of the panels is well done too, considering the curves involved…a small mismatch will have an amplified affect, but there are no issues here. 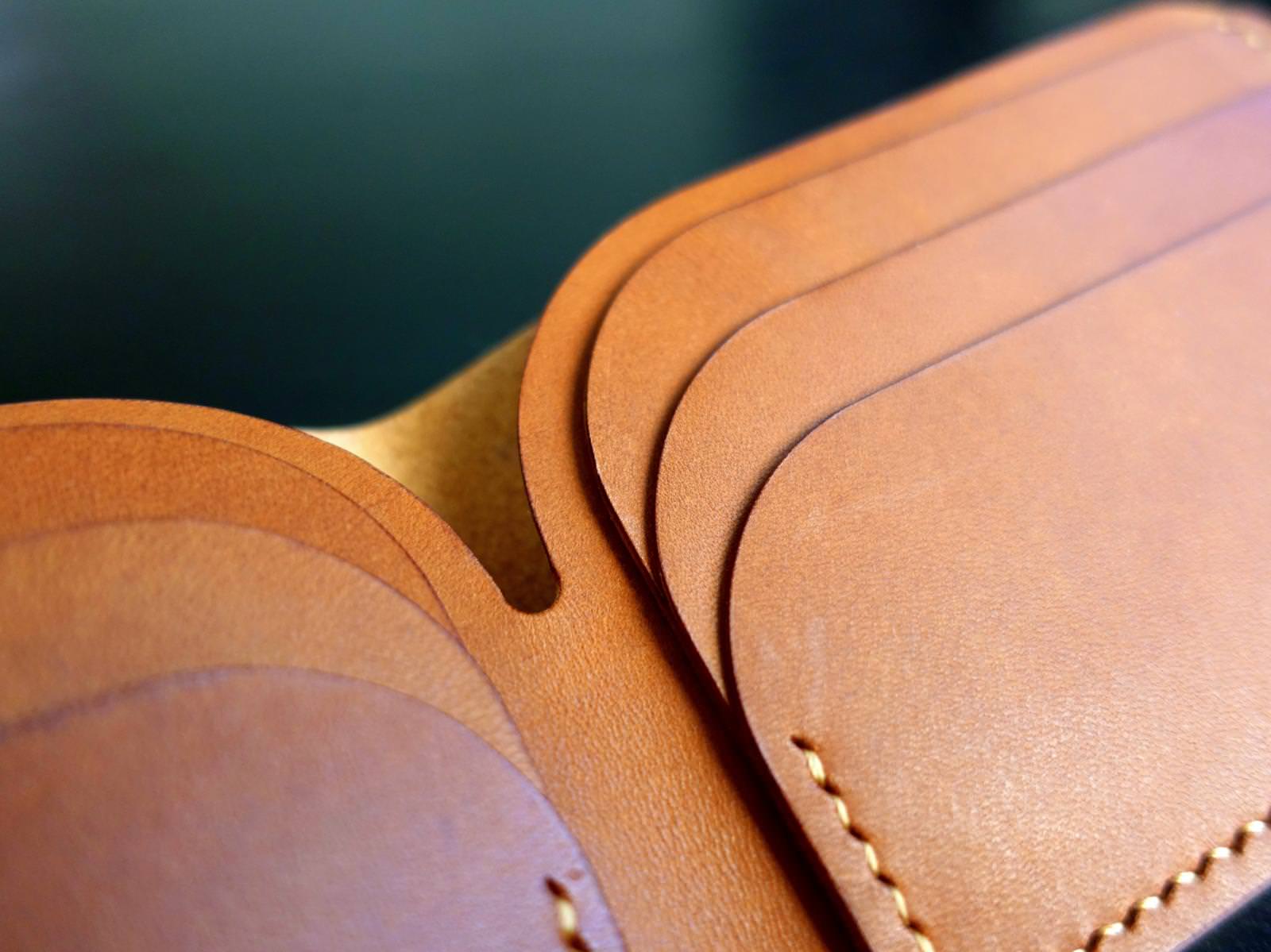 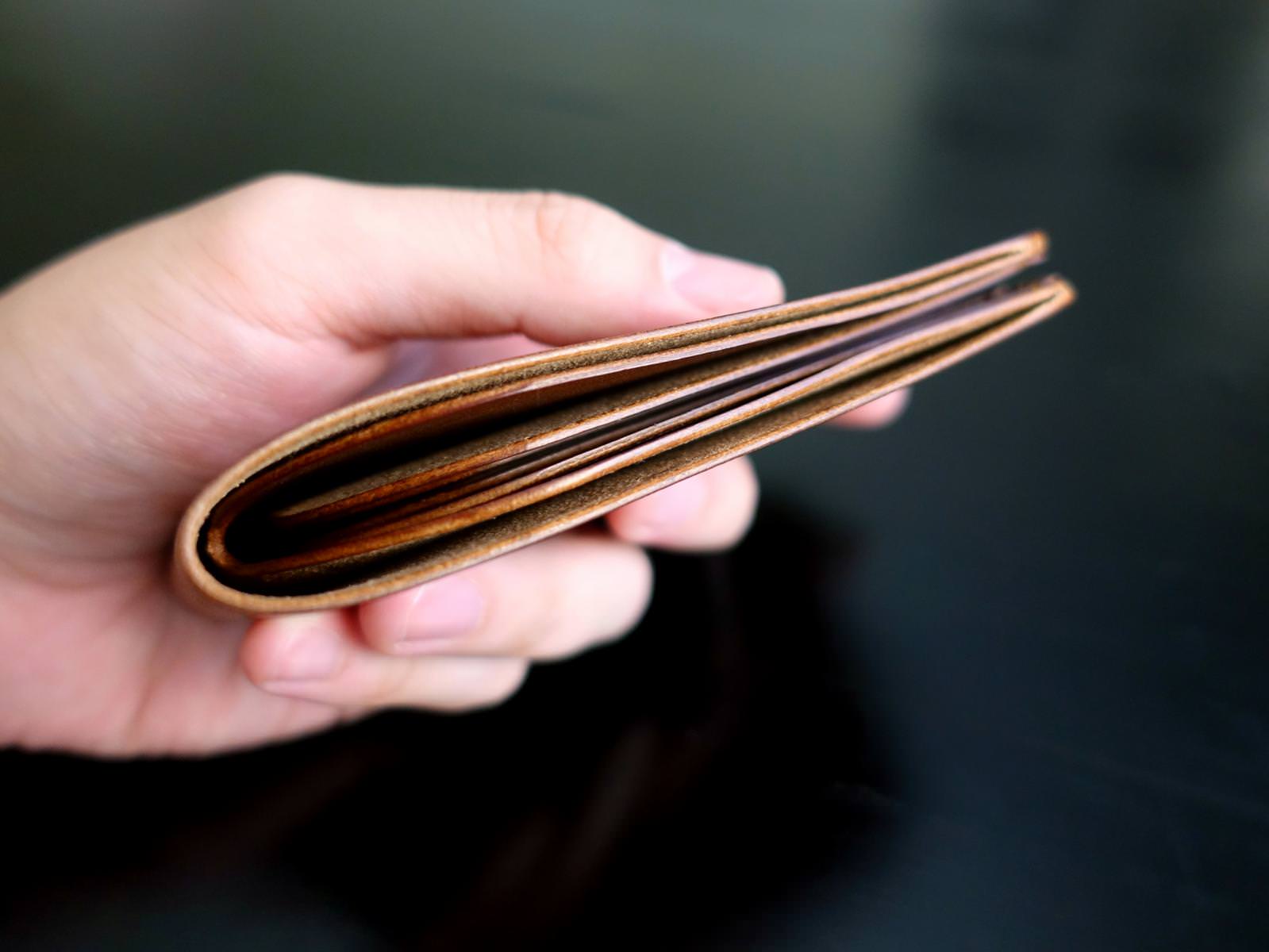 All the edges of each panel are nicely burnished. There’s no fluffiness or rough portions. 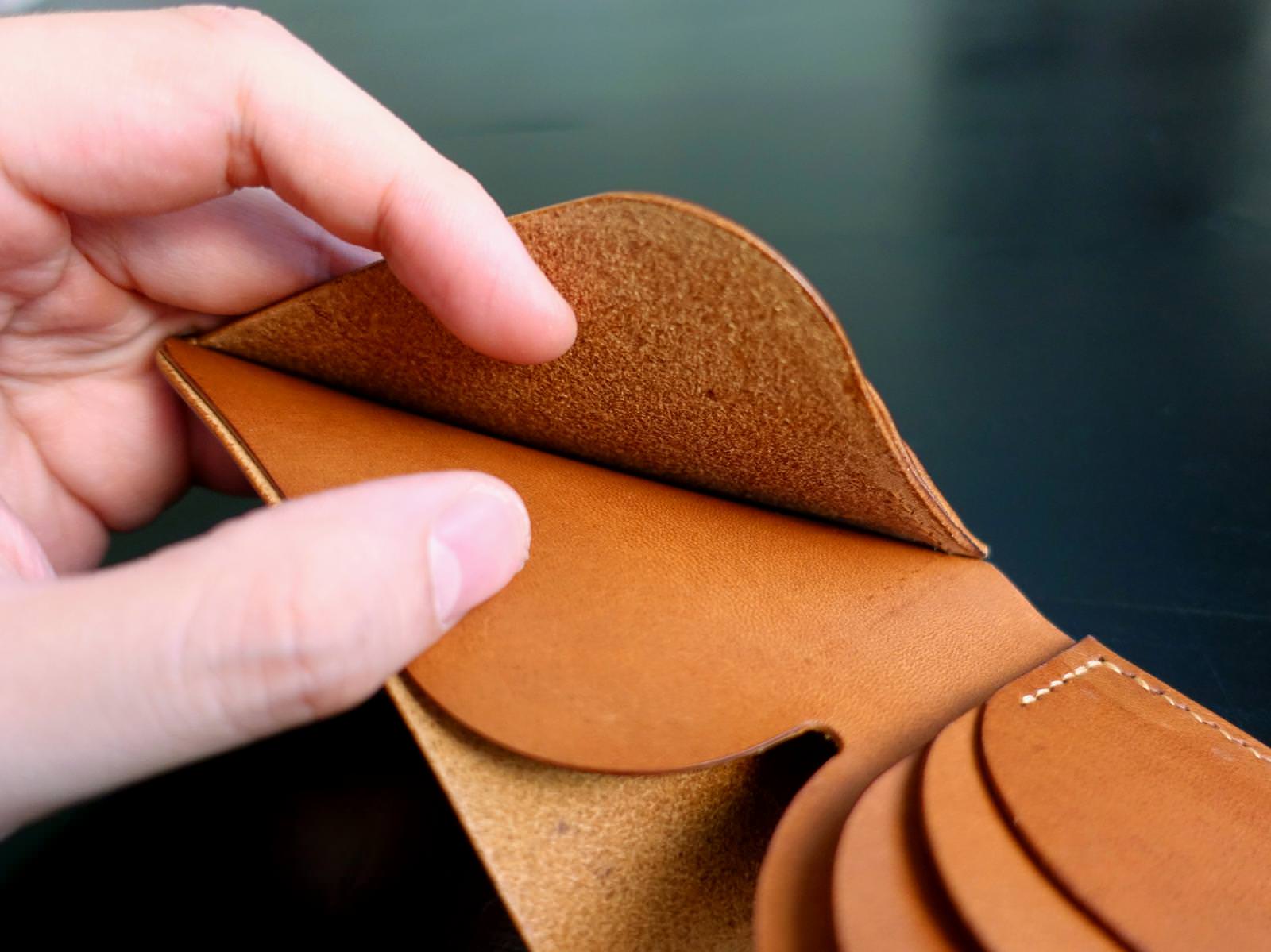 The backside of the leather is not further finished, but is rather smooth nevertheless. 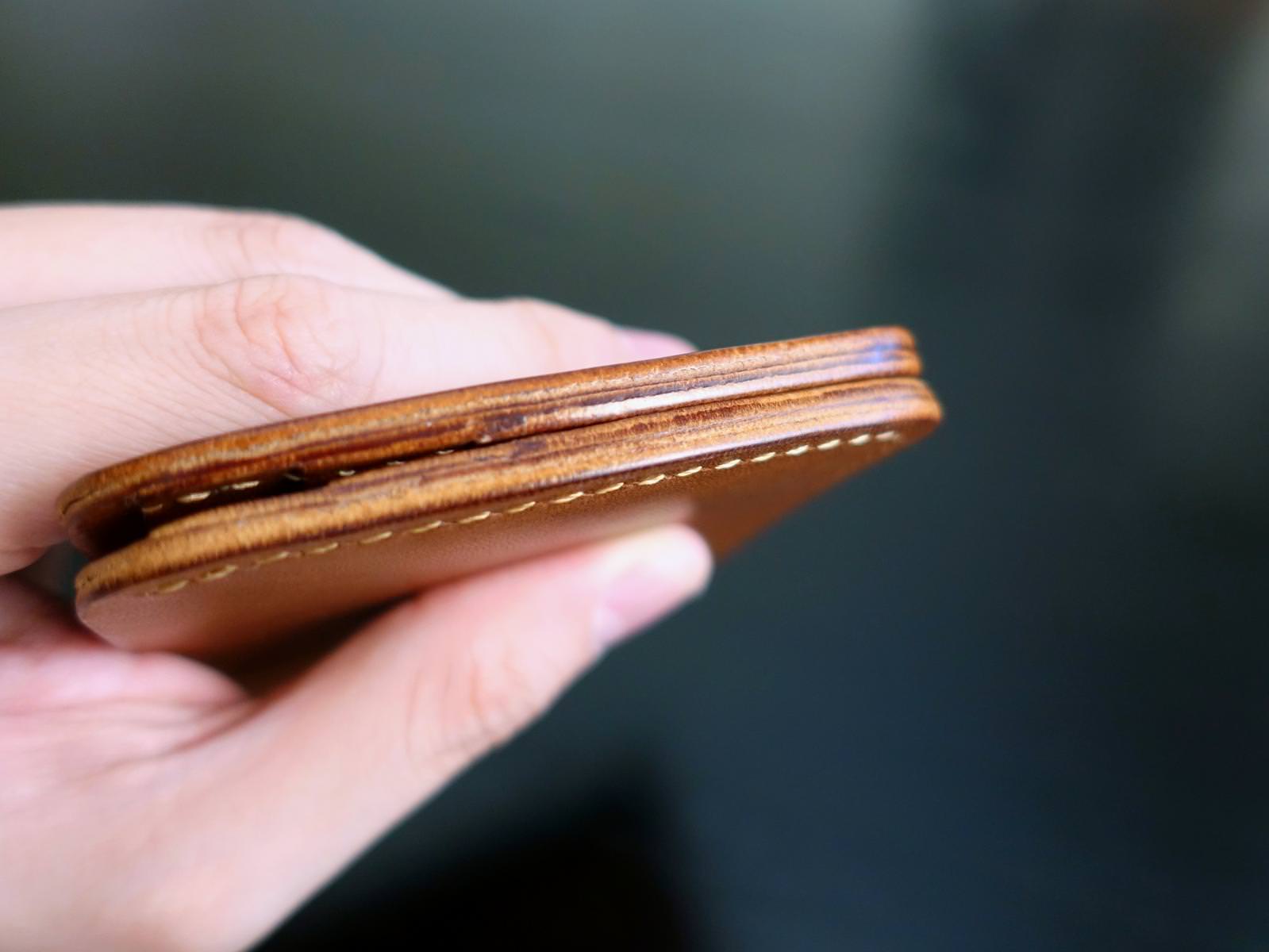 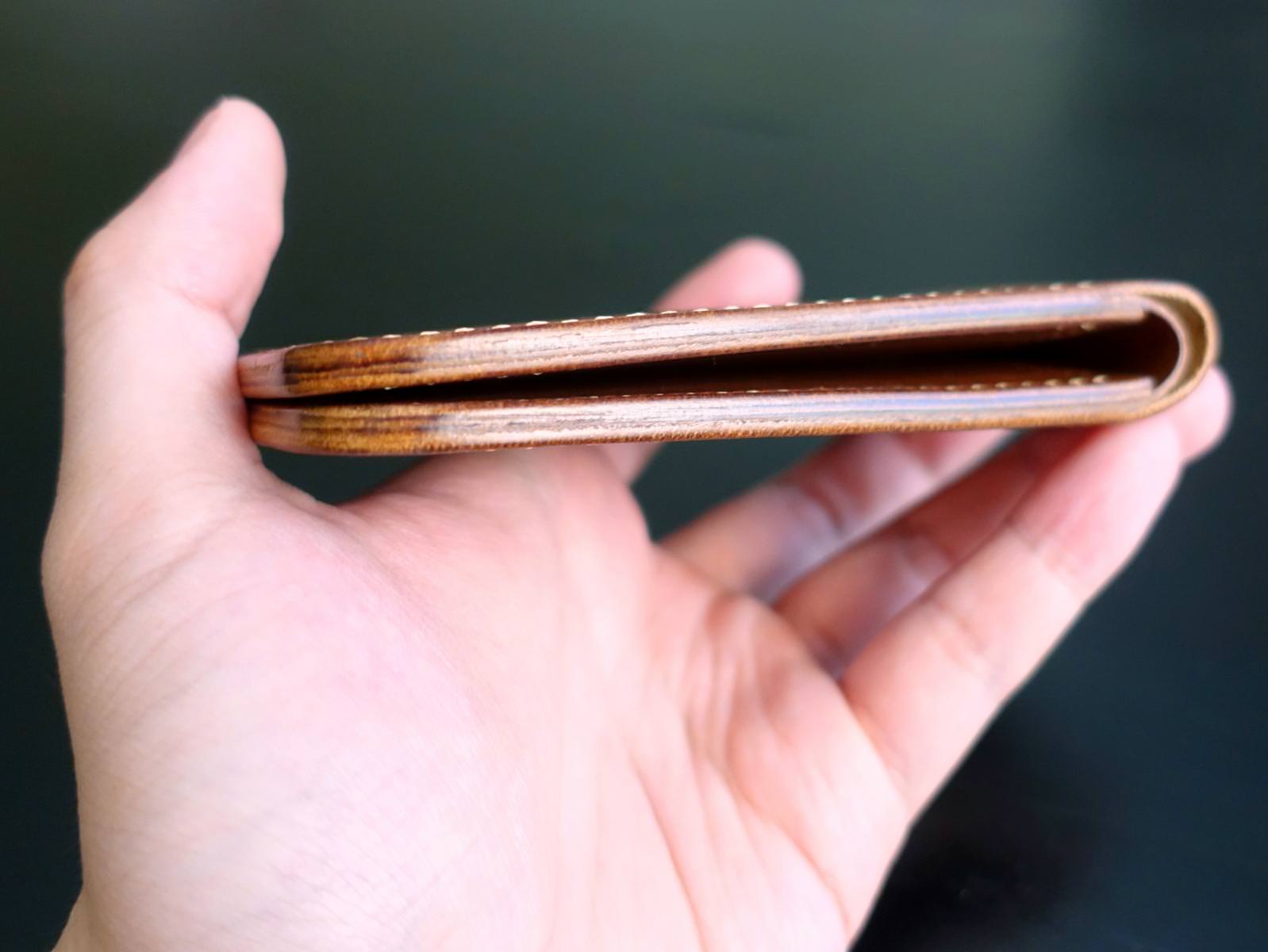 Finally, the outer edges are smoothly burnished with gum, showing off the layering of the panels. The burnishing is nicely done – not a mirror surface by any means, but given the Minerva soft temper and oiliness, this is probably as good as it gets without the use of machinery.

This is my first piece of leathercraft from Jiten at Waxwing Leather, and I am very impressed!

The most remarkable aspect of this classic bifold is the refined overall presentation and the considered use of curved edges and corners to give this wallet a lot of personality and uniqueness. Anyone can make a sexy mid-wallet, but a good looking bifold is a real challenge: Bifolds are usually quite boring, and when people attempt to spice up the designs they mostly end up comprising either carrying capacity or user friendliness, but Jiten’s inner layering on this classic bifold suffers no such issues. 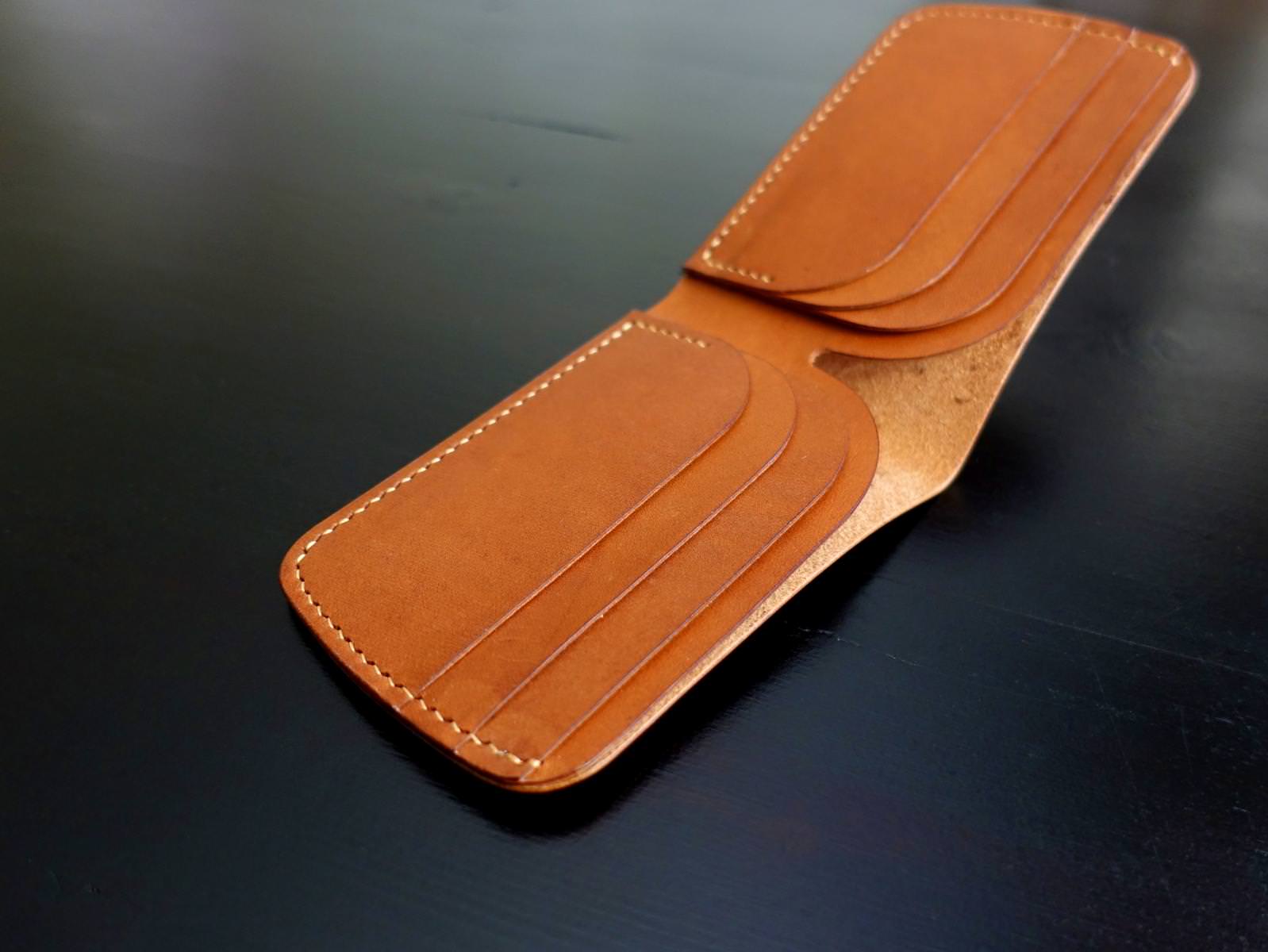 Indeed, this classic bifold strikes a great balance between a streamlined, minimalist overall appearance and being a statement/signature piece. Again, bifolds are tricky because you only have so much space to work with, and yet a boring wallet is just no good – I still think the wallet is the most telling piece that a man can wear, more so than his tie, jeans or boots. The aesthetics here will go nicely with either formal wear or work wear, mostly influenced by the thickness of leather utilised.

Jiten offers this bifold at an amazing price of $90 USD…

I actually think that this is probably too cheap for the level of workmanship and the quality of material At this tier of pricing, this classic bifold is practically flawless. For my own preferences, I would love to see a thicker leather (~ 2 mm or 5 oz) being utilised for the outer or to have the outer lined with another leather – in the long run this might help the wallet keep a better shape – but of course this will increase the pricing of this wallet.

Regardless of pricing tier, this bifold from Waxwing Leather is pretty awesome. Jiten has a real knack for curves, and his bifold is one of the cleanest and most beautiful I’ve seen. 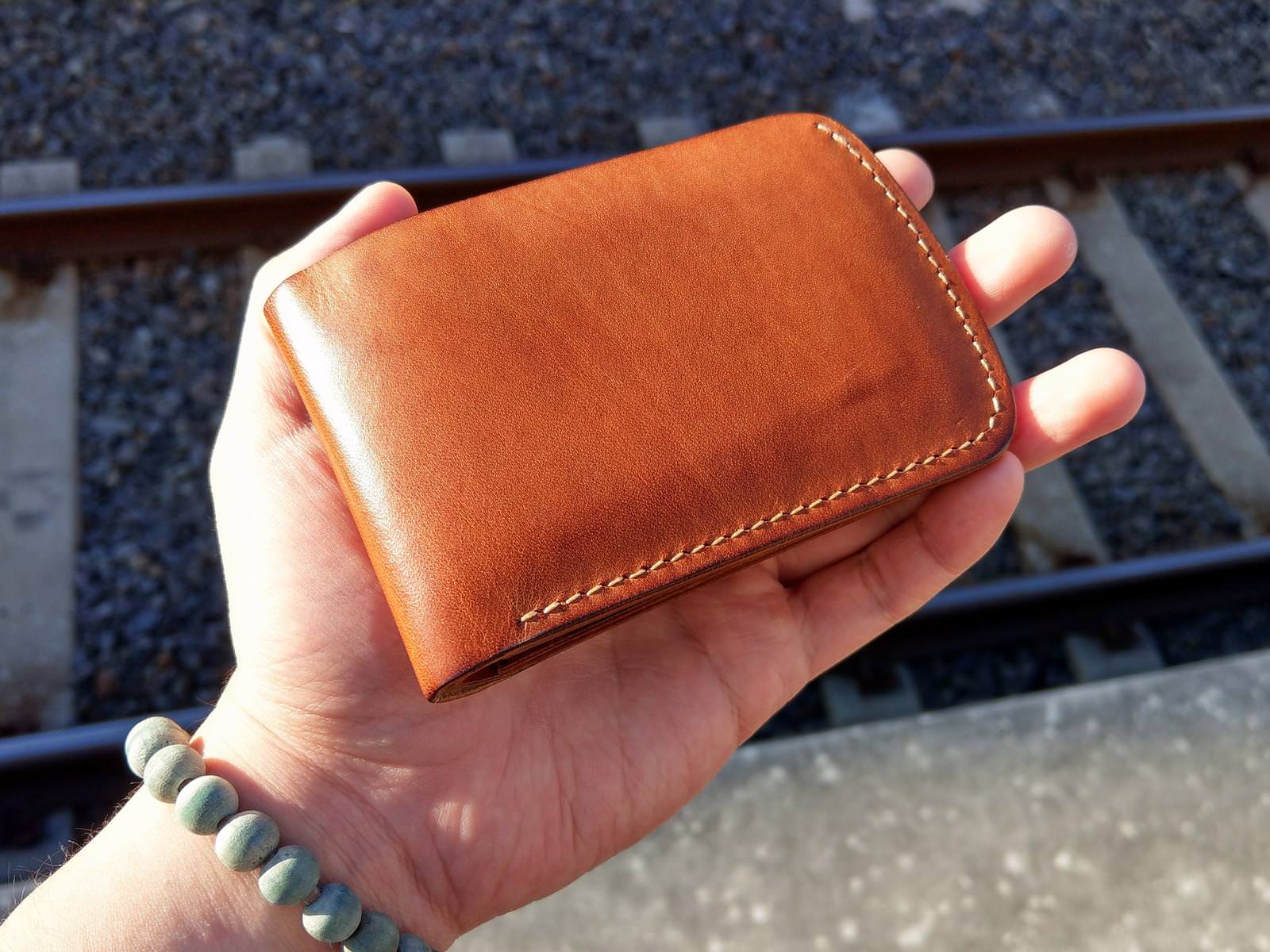 At $90, I’d say you should try a wallet from Jiten regardless of whether you need a new wallet or not. Despite the ever increasing number of private label leather workers out there, it is still very rare to see a nicely executed bifold, and so I definitely recommend having a look at Waxwing Leather.

You can contact Jiten easily through Instagram through the link above – let him know Mike sent you!