You might remember the Harvester henley shirt from The Rite Stuff, the prototype of which I reviewed here at the meeting with brand owner Bryan in Taipei last year.

It’s proved one of the most versatile pieces in my work-wear wardrobe, and I wore it consistently during the Australian spring season, and even into our summer too. Well, I’ve been testing out the retail version of the Harvester henley, so I’ll give you guys some updates regarding some changes that have been made since the prototyping stage.

Both my regular and prototype version are size XXL, and you’ll notice that the regular version fits a little closer and slimmer in the body, much more like a sports undergarment – check out the historical background in the review of the prototype linked above.

Mind you, in the fits here, I’ve lost a few more kilograms compared to my chubbier self in the photos from the previous review. For reference, my chest size is 44, and the shirt is XXL. 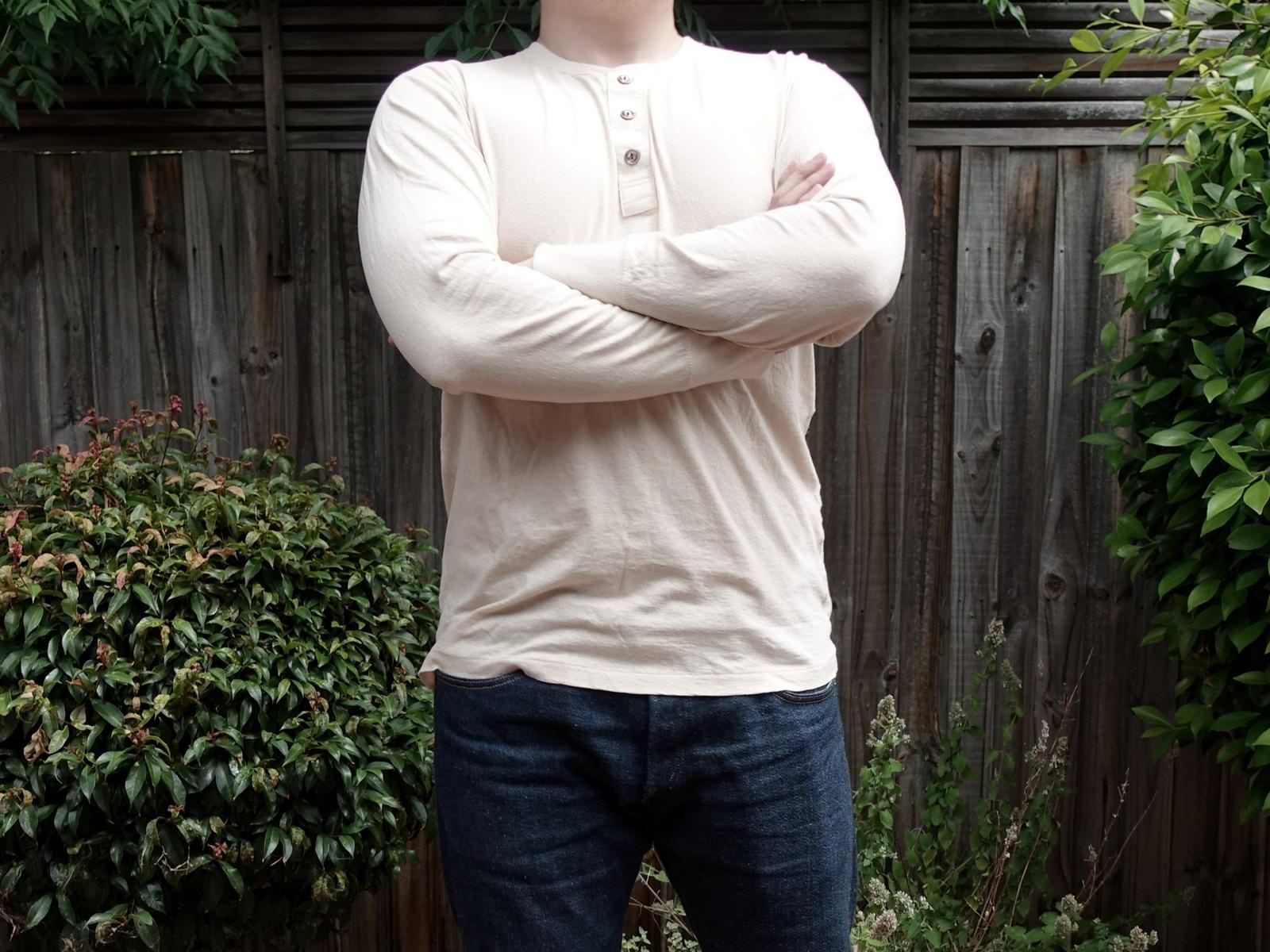 Not only is the body of the shirt a little trimmer compared with the prototype, the arms are also narrower from the shoulder down to the wrist. The regular edition Harvester is a bit more fitted, in other words. 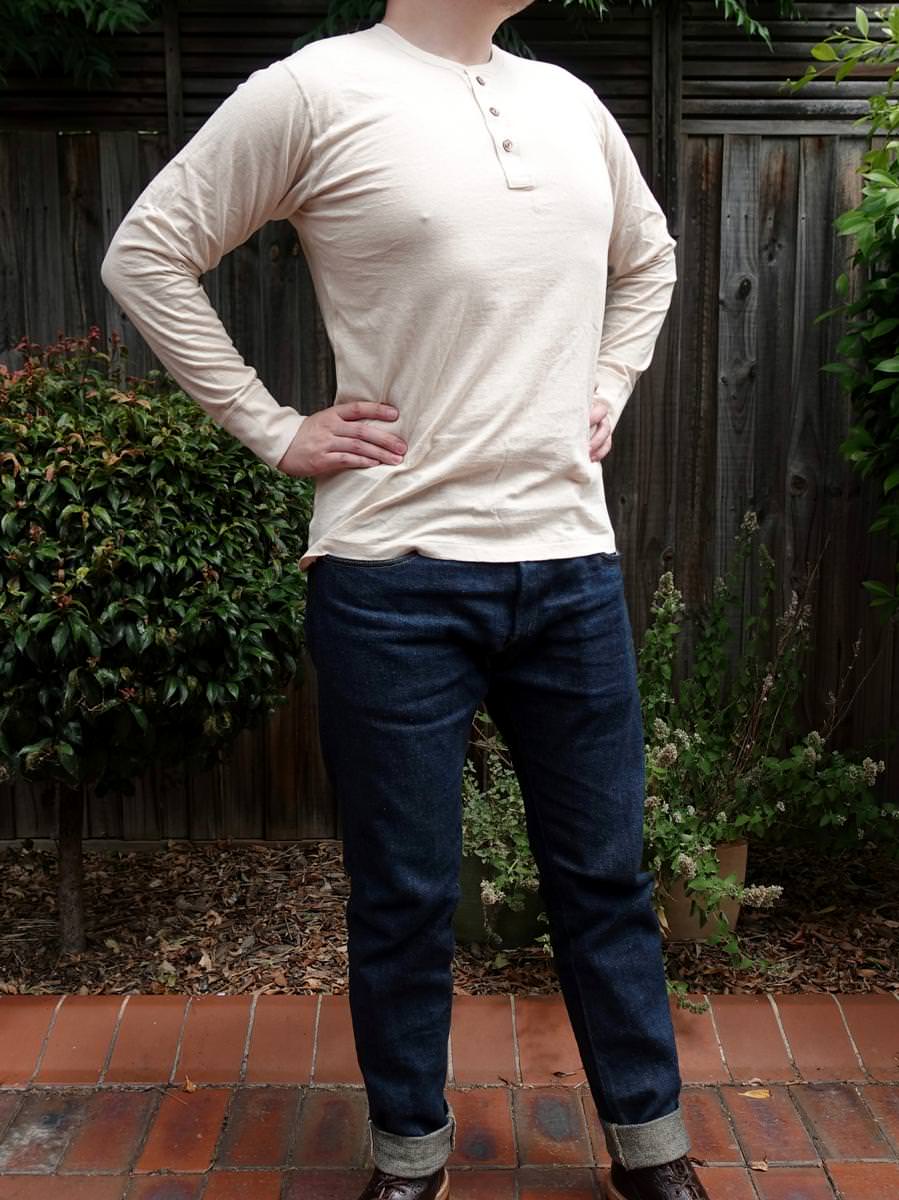 Of course, the Harvest was also designed to serve as an undershirt. In colder climates, it would slip easily under a leather jacket.

Just like the prototype, the regular edition of the Harvester henley is made with a medium weight, all-cotton knit consisting of unbleached, ecru cotton. The knitted jersey, like the shirt itself, is made in Japan.

The all-seasons weight and the very natural colour contribute greatly to the versatility of this henley shirt. 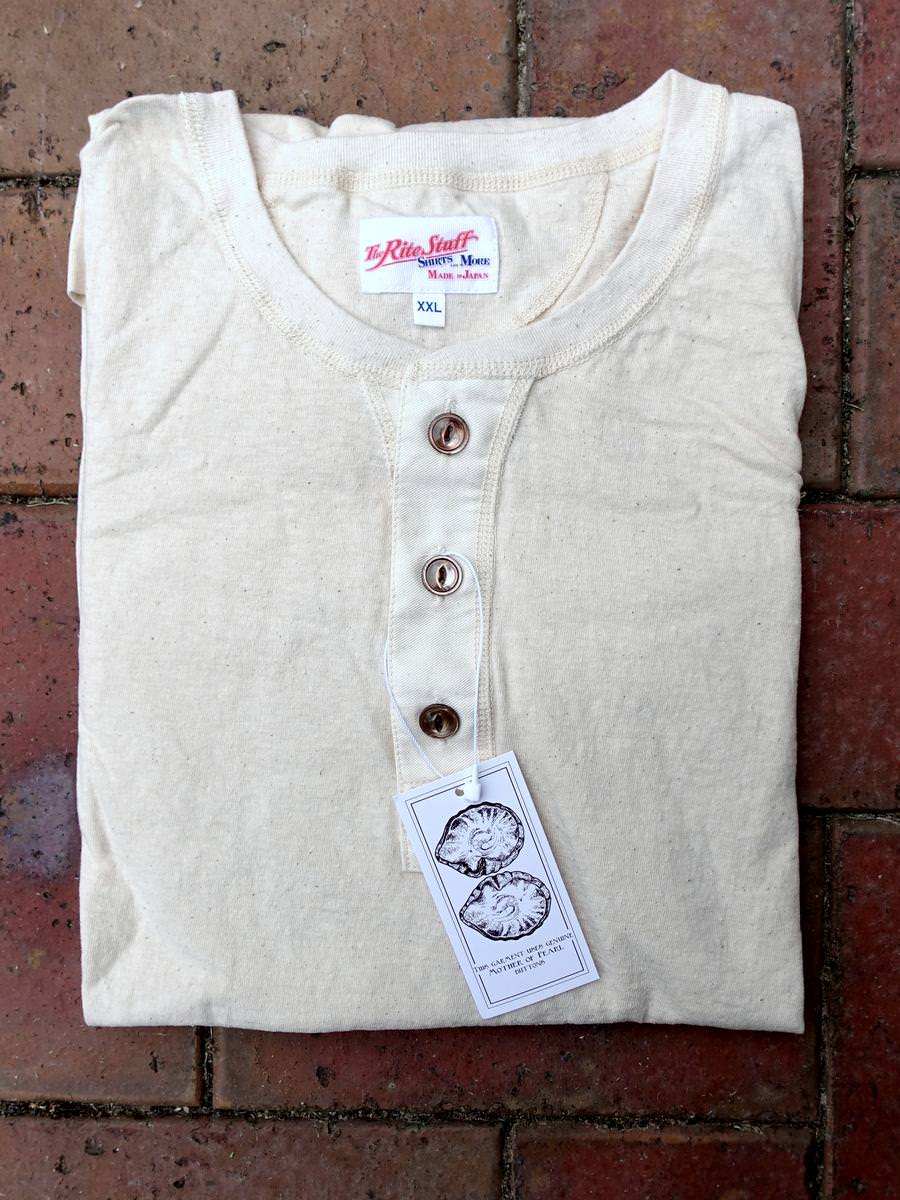 The brown little flecks within the fabric are also interesting – they’re actually small pieces of the cotton plant!

The ribbings and cuffs feature the exact same cotton, in a tight twill. 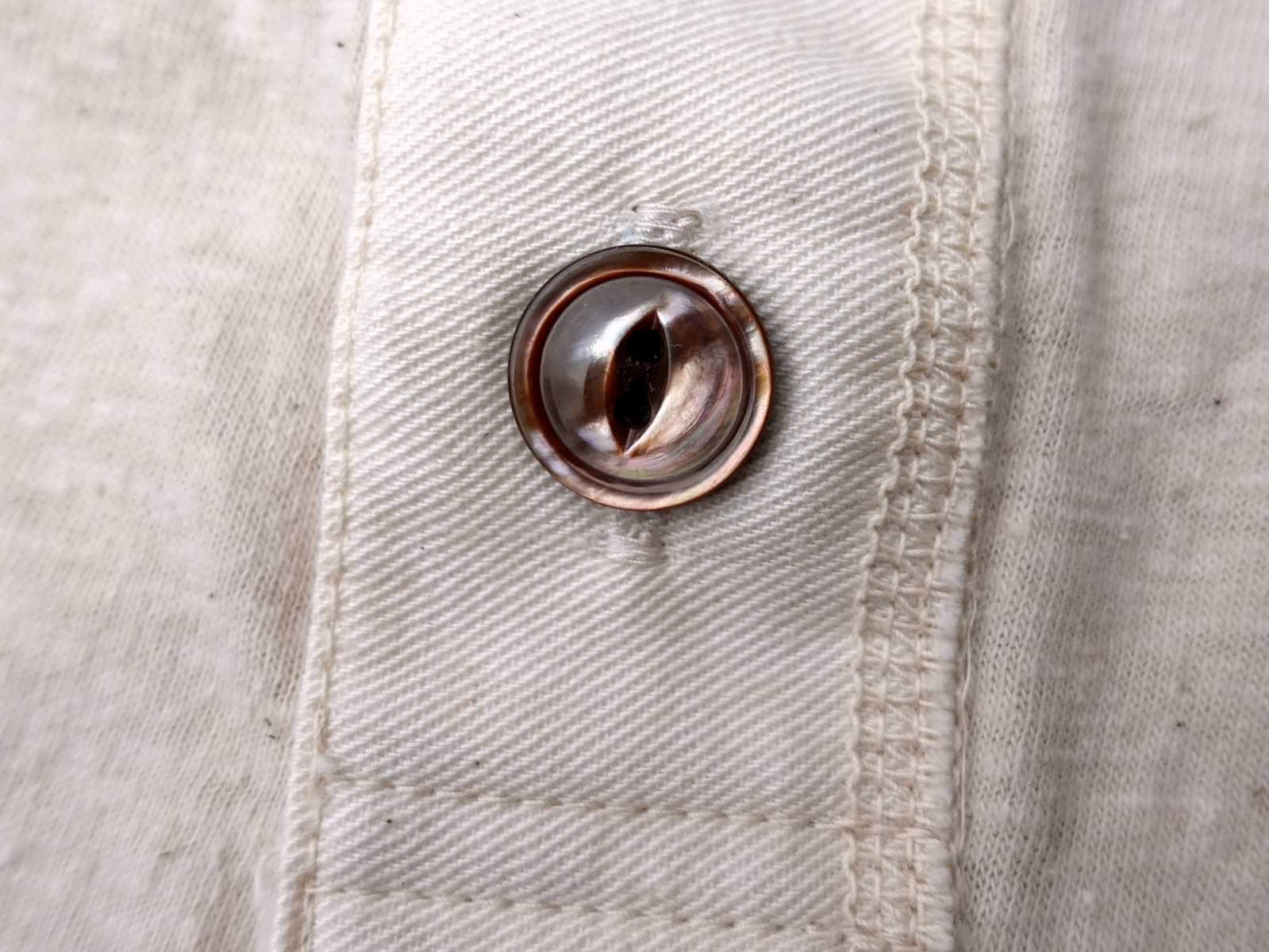 The 14 mm cat’s eye buttons are made of brown mother-of-pearl, and remain of the the core features of the Harvester. Right click to enlarge the photo above – the shine, colours and variegated tones of these MoP buttons are very cool.

It’s mostly in the details where the regular version of the Harvester differs from the prototype. It’s still the same shirt for sure – the alterations are in the finer aspects of detailing. 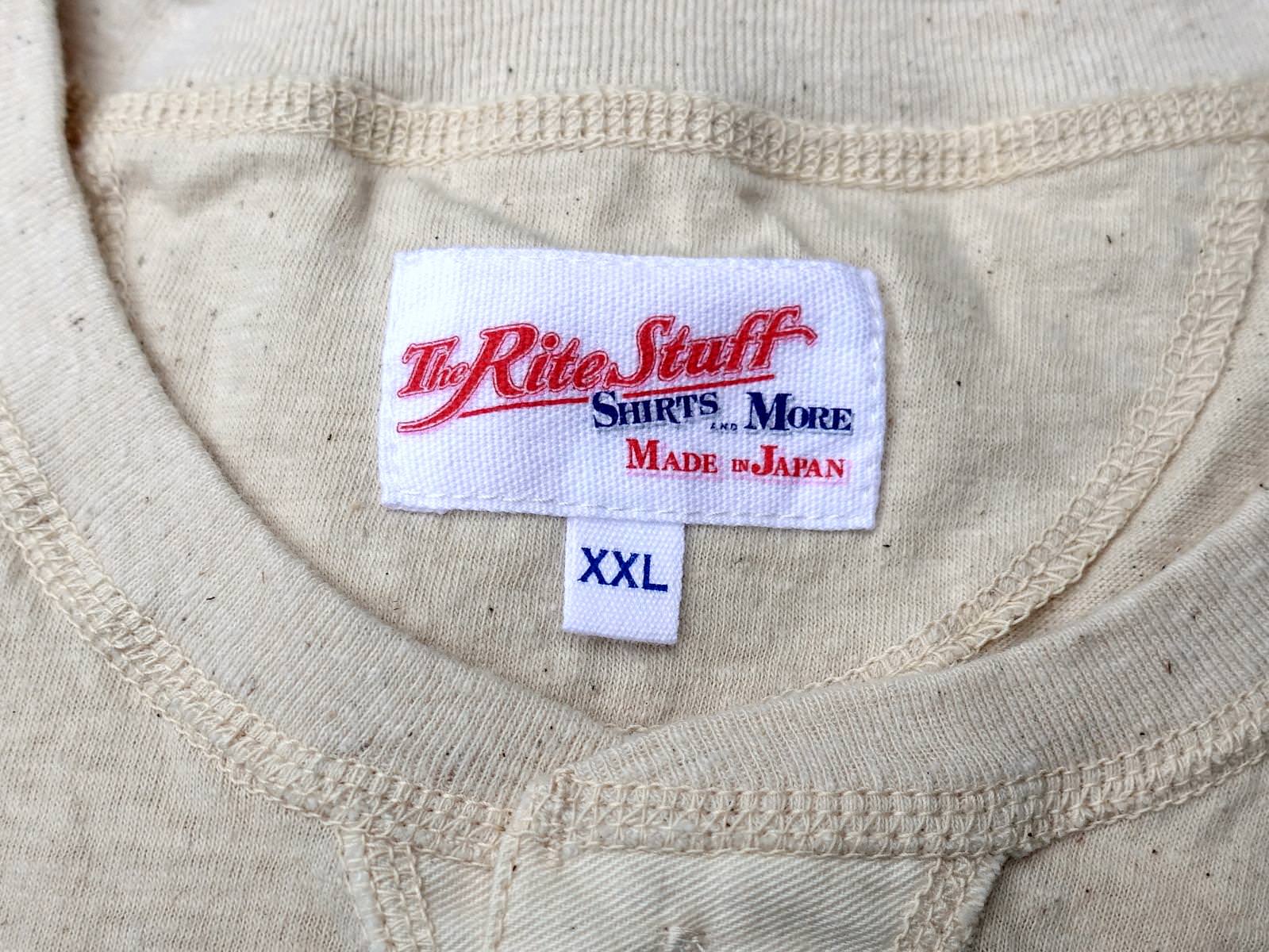 Firstly, Bryan is still experimenting with tags and labels, and the current label design is different from that on the prototype or the Heracles chambray shirt. 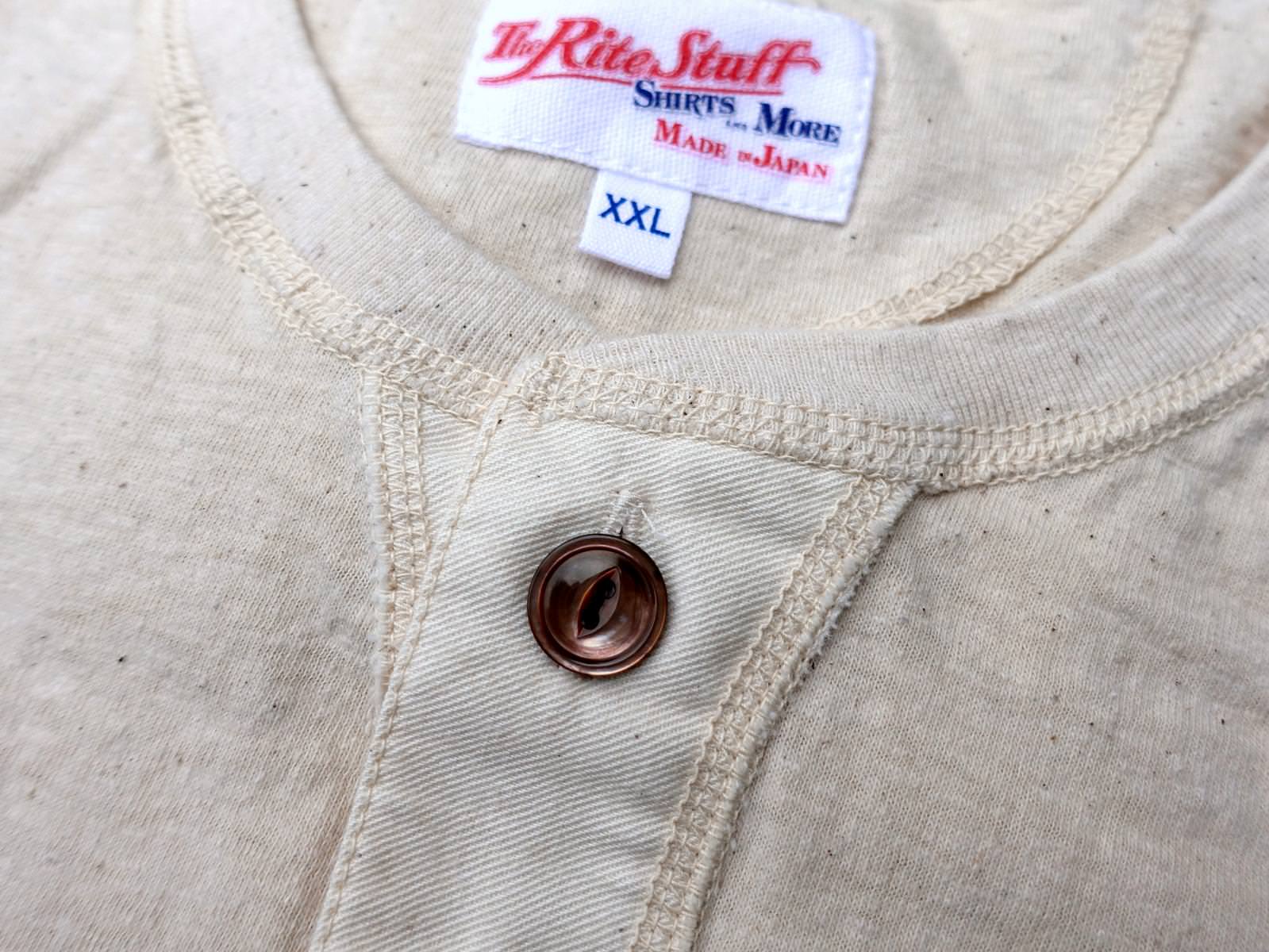 The curved placket facings is are featured again – this was one of my favourite details on the prototype – improving the appearance of the henley when worn. 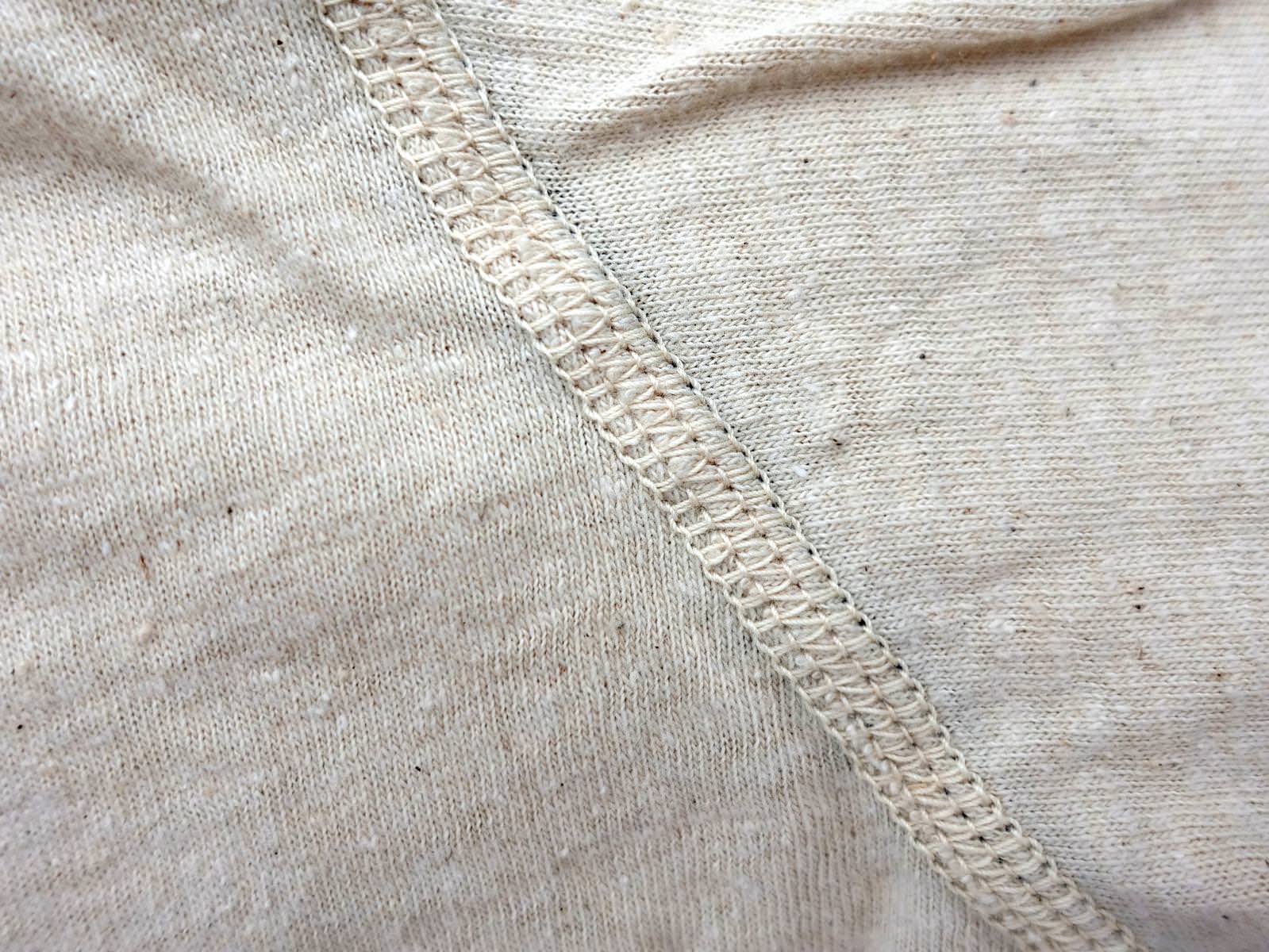 Lock-stitching is extensively used throughout the shirt and is neatly executed. 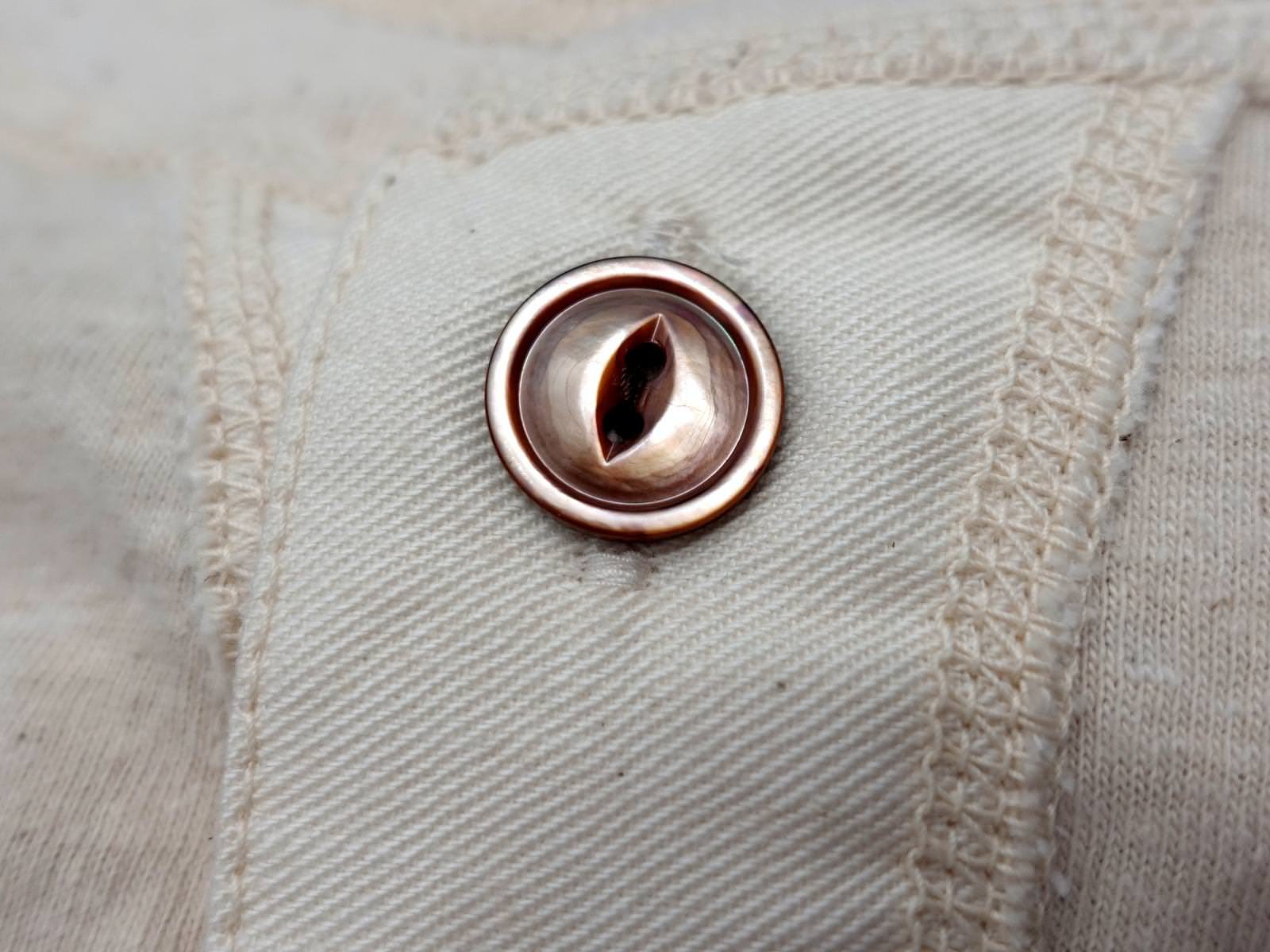 Another change in details would be the use of tonal brown thread for sewing the MoP buttons – old school indeed.

You might also have noticed that the button holes are now vertical, making the buttons easier to use and giving a neater appearance to the henley. 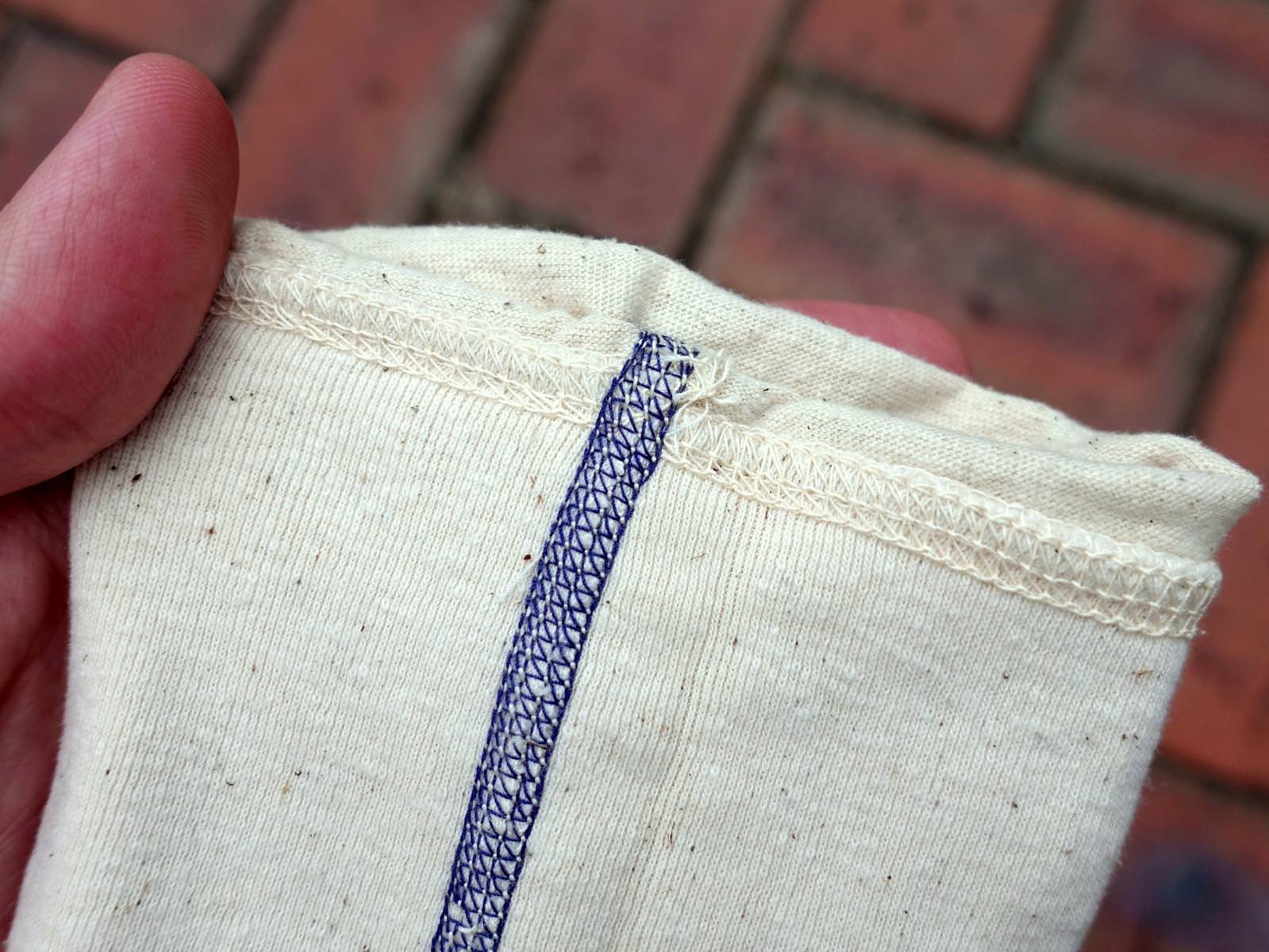 The inner threads of the shoulder and side seams again feature contrast blue stitching – looks great with the cuff rolled up – though in the regular version of the Harvester the circumferential wrist seams no longer feature the blue thread. 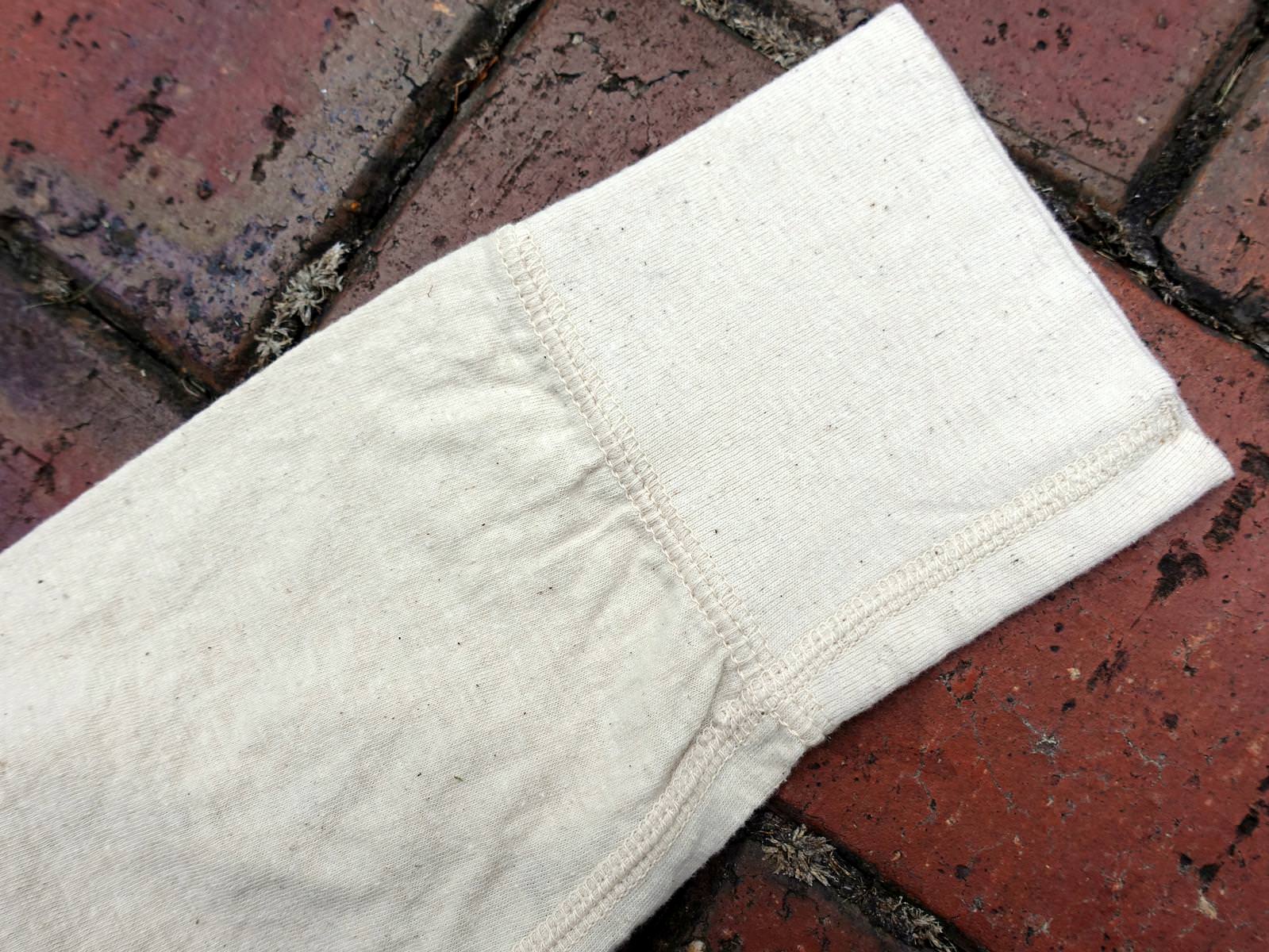 What the wrist seams now have, however, is added elastic banding. This makes the Harvester much more comfortable to wear for those with thicker wrists.

It seems like Bryan never stops working on his The Rite Stuff brand. Certainly, he’s gone back to the Harvester henley shirt and made several upgrades to it since I first looked over the prototype with him in Taiwan.

I reflected in the previous review that the Harvester was a well priced, well made and very versatile piece that would find a place in the wardrobe of anyone who is interested in work or vintage-style clothing. Of course, born of sportswear in the same era as denim was born of workwear, the Harvester will combine nicely with denim jeans too.

Importantly, if you have a larger build than the average Japanese man, the Harvester does offer the advantage of being fitted for larger and more muscular physiques at the larger sizes, going up to XXL. In comparison, most henley shirts made by Japanese denim and workwear brands are much too tight for me around the chest and traps at the largest sizing.

With The Rite Stuff, Bryan puts in tremendous effort to research and refine his garments, and has them made by some of the best workshops in Japan through John Lofgren. Each piece is something special.

He releases one garment after the next, gradually, spending much time on each to get the details just right, and it’s fascinating to follow Bryan’s thoughts on his brand blog too.

At $95 USD, the Harvester is great value, considering the Japanese materials & construct, and the small batch release. You’ll get heaps of wear out of it too, the Harvester being “very high yield”, and perhaps like Bryan or myself, you’ll be wearing it most days during the spring and autumn seasons.

All in all, the Harvester is a very detailed, well though-out, and worthwhile henley shirt. Check it out at The Rite Stuff!