I’m a huge fan of the Fallout series of games, and in particular the art in Fallout 3, Fallout: New Vegas and Fallout 4 really captured my imagination. I remember spending hours exploring these in-game worlds, filled with fictionalised post-war Americana designs. Sadly, I don’t really have time to game so much these days, but my fascination with the retro-futuristic aesthetic continues.

Mike at Wild Frontier Goods, no stranger to pop culture, has been creating some wild wallets recently, with some very unique patterns which showcase leathers and colours nicely.  After some discussion, he came up with a great idea to combine one of his new wallet designs with the blue & yellow colour theme of Vault Tec, an important part of Fallout lore. 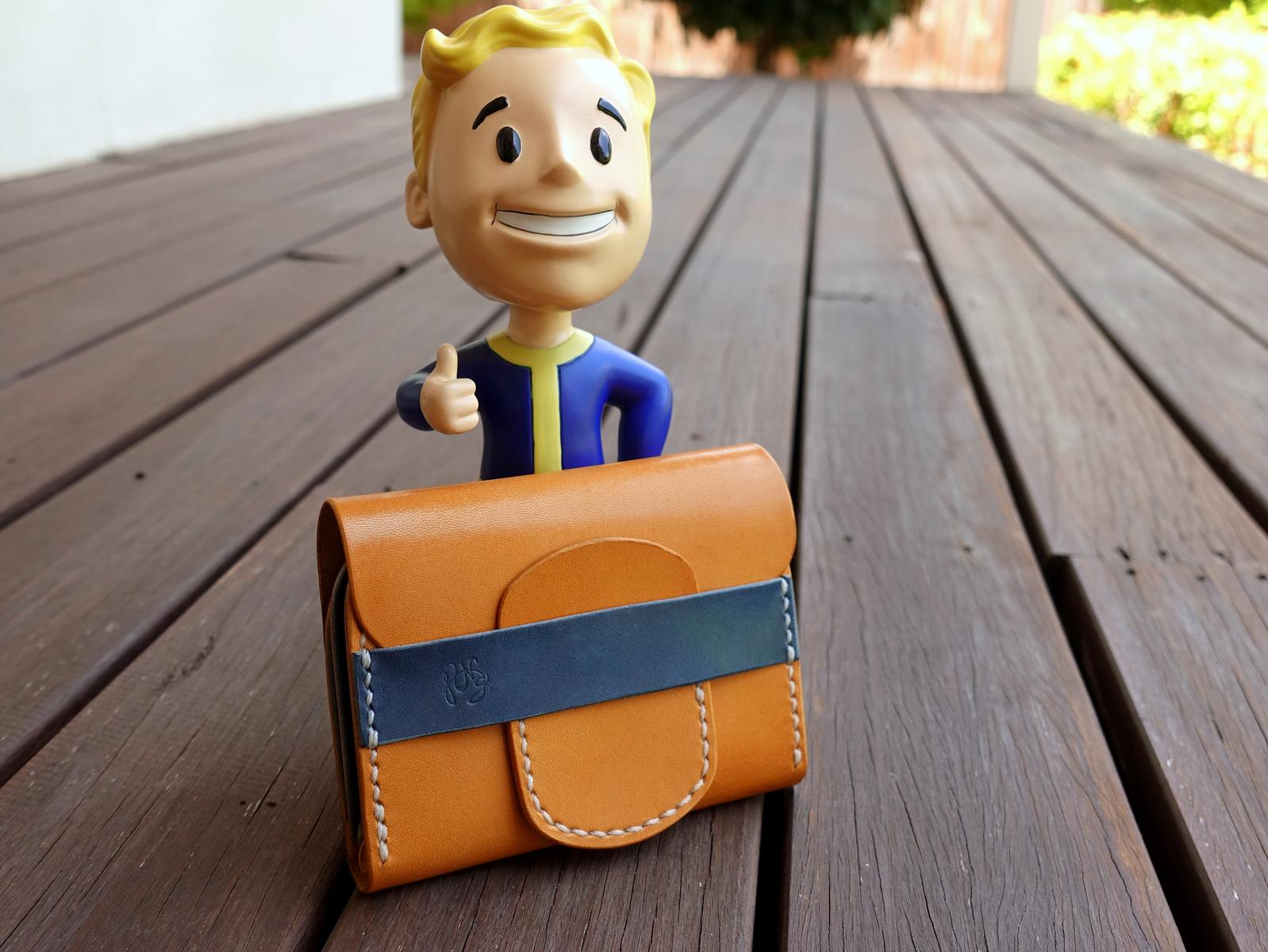 So it is a very warm welcome-back to Wild Frontier Goods on the blog for 2019, as Mike & I embark on our first video-game themed wallet project. Let’s check out this custom Vault Rider trifold wallet!

Makimono translates to “scroll” in Japanese – fitting for a trifold – and according to Mike here in lies a reference to the Elder Scrolls series of games, also by Bethesda.

This is a pretty radical new layout aimed at Japanese leather fanciers and denim-heads alike. 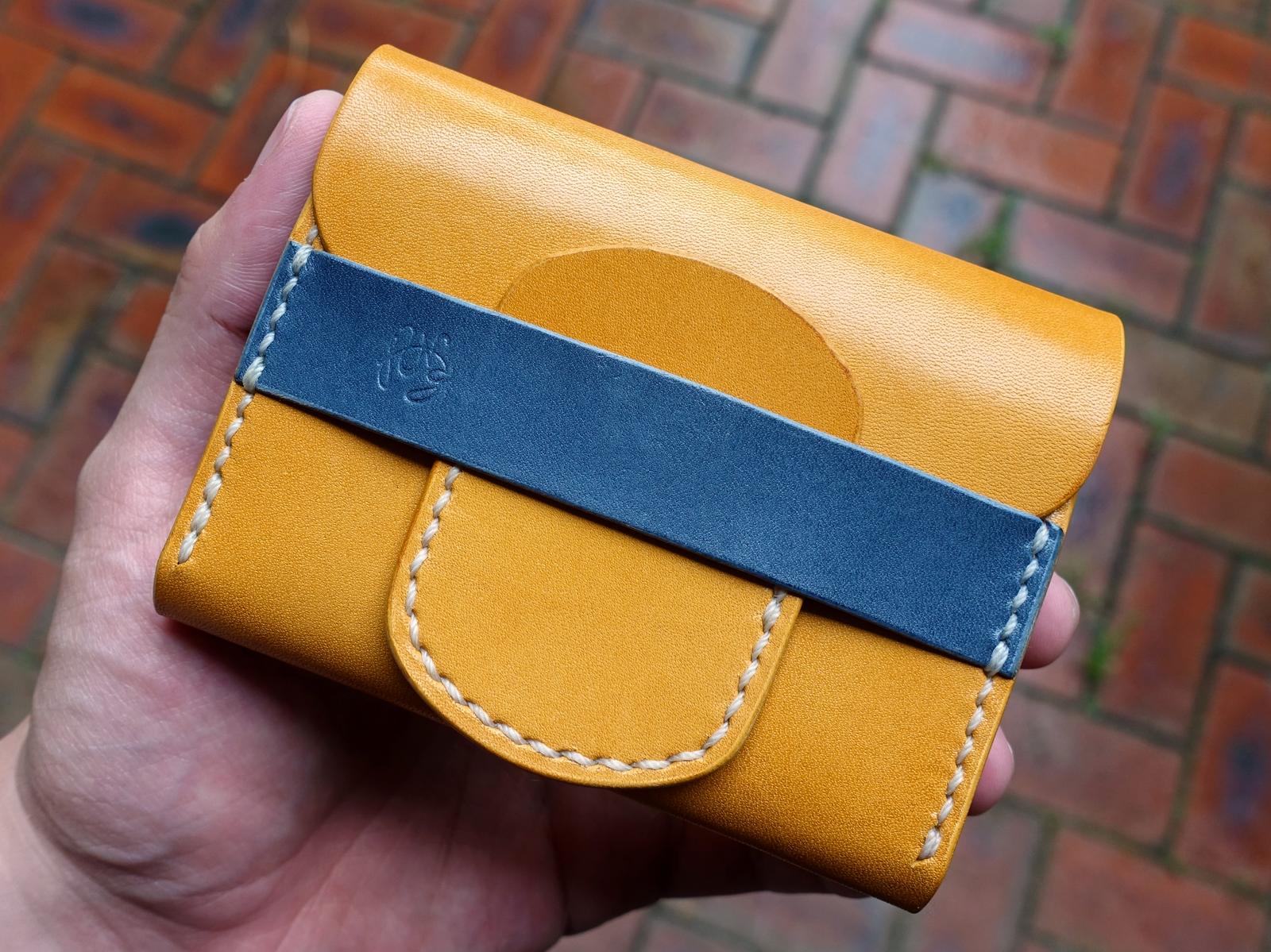 It is 2 cm thick when fully loaded. 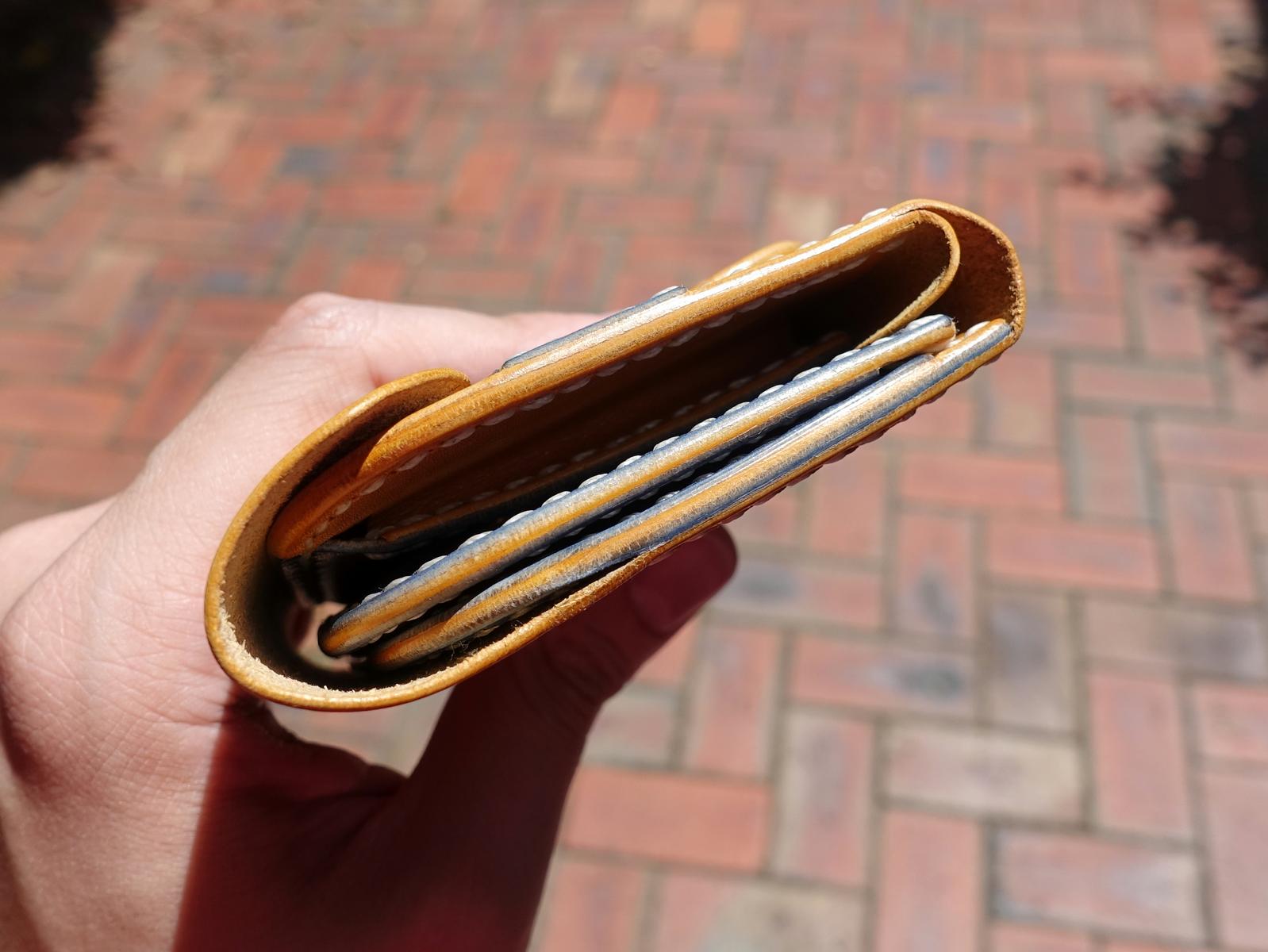 The wallet is closed via a band on the exterior.

The pull-tab is reinforced by an additional layer of leather. 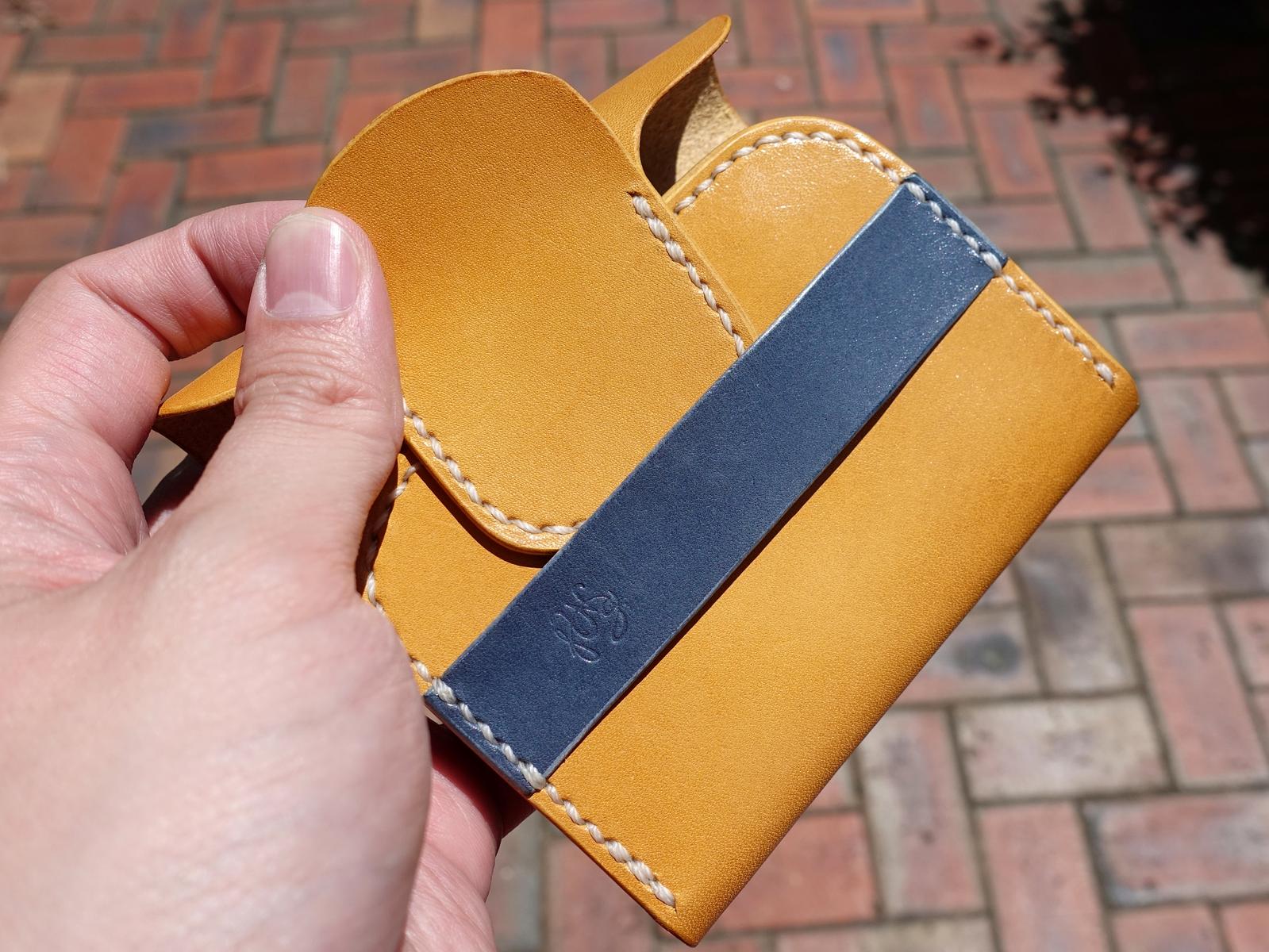 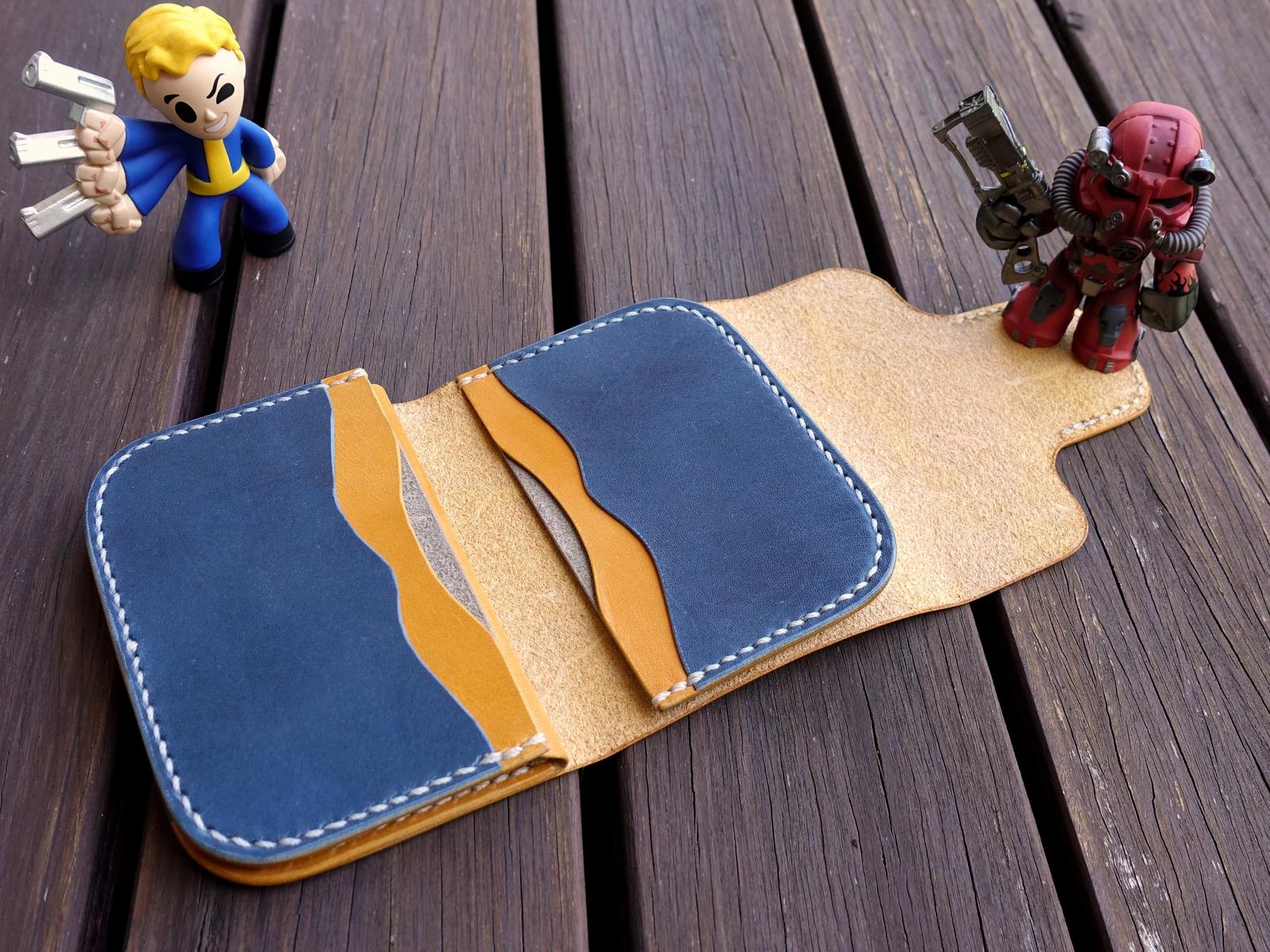 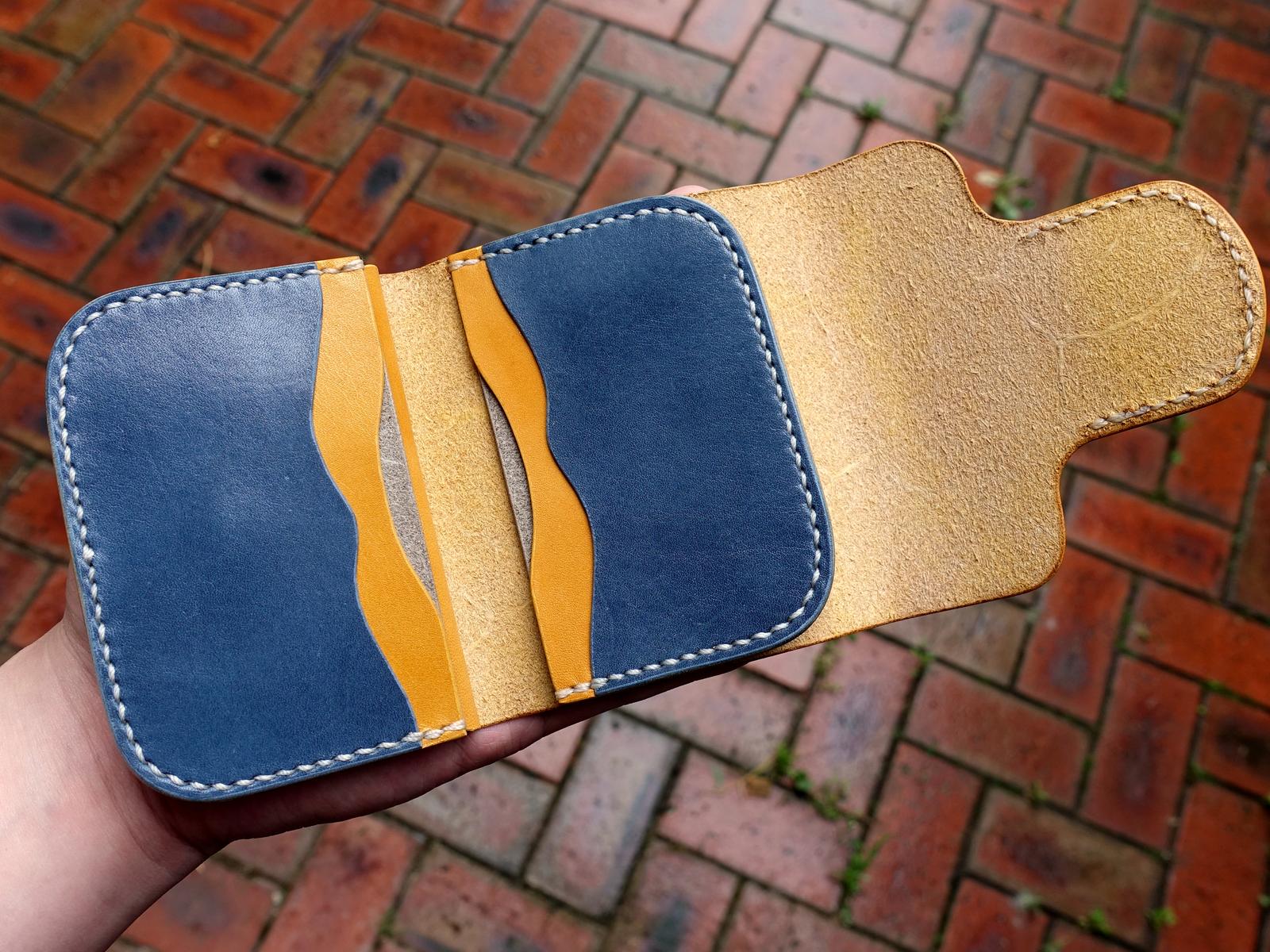 Each panel of slots contain 1 access slot and 1 compartment. 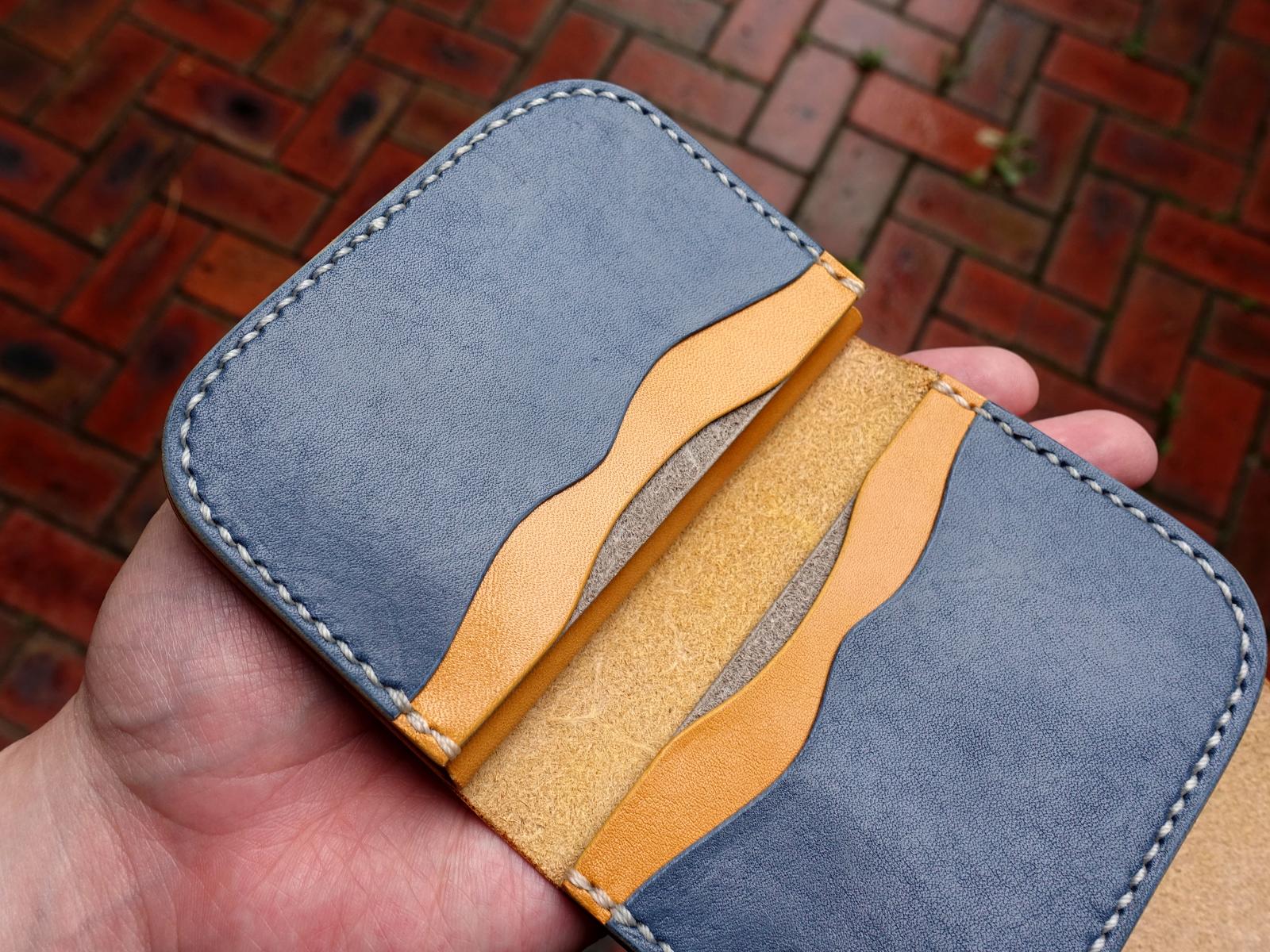 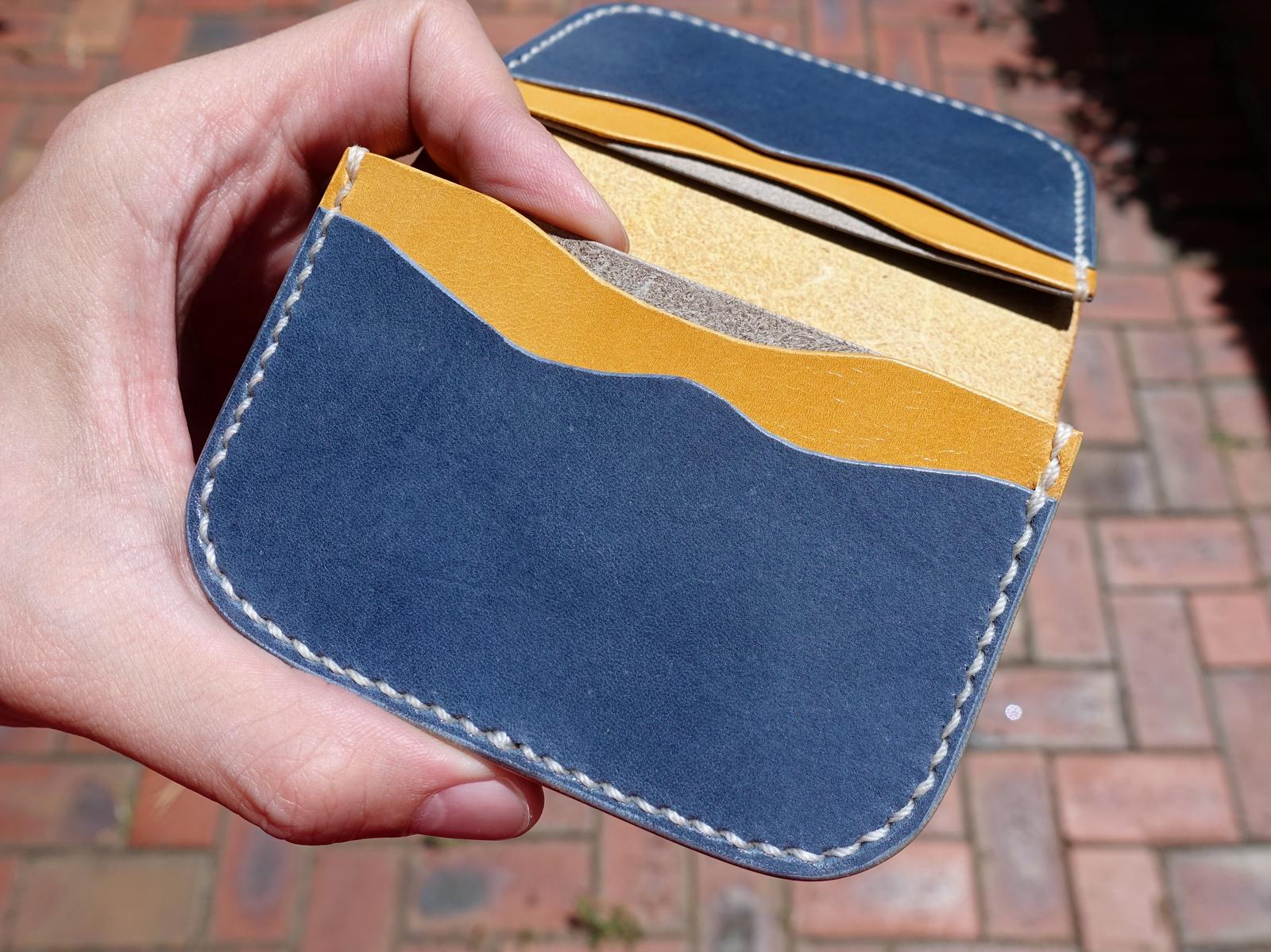 Sandwiched between the coin compartment and the outshell, the notes compartment is also wide enough to further store cards.

The notes can be stored folded, or straight out in a horizontal fashion, beneath the panels. 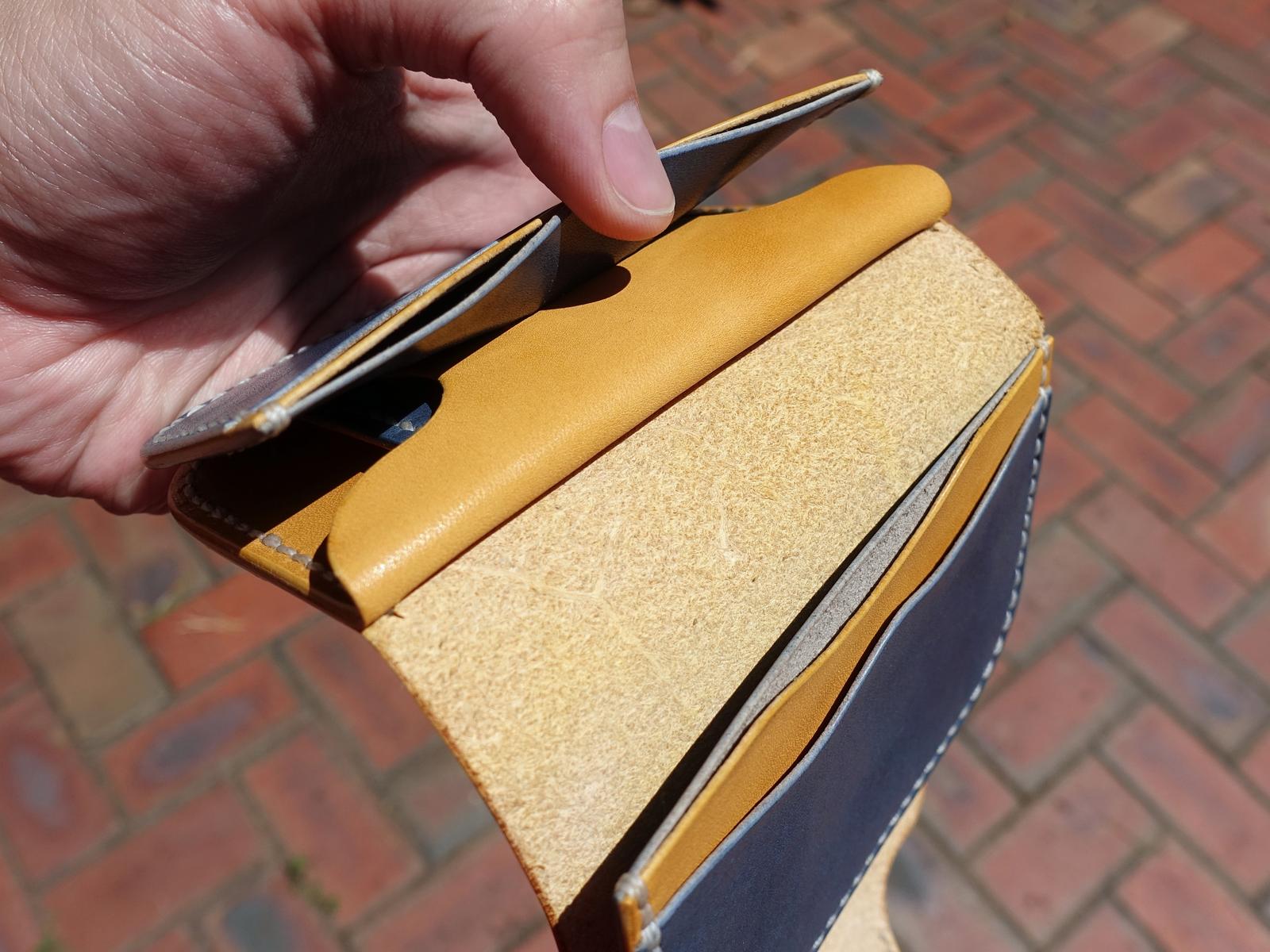 The coin compartment is held closed by a snap.

There is enough room for a handful of coins, without any distortion to wallet shape.

The layout is such that it might store everything from guitar picks to receipts. 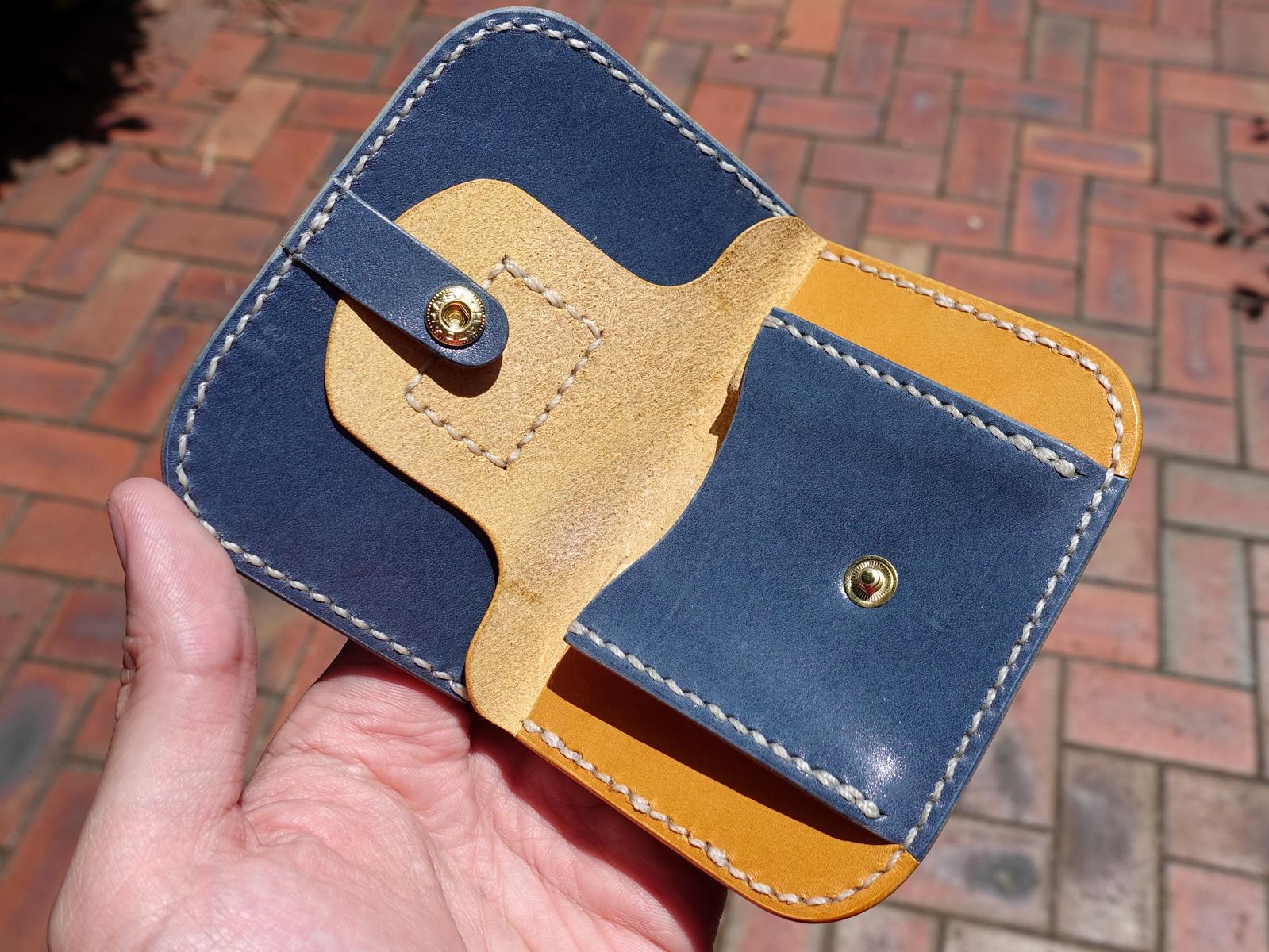 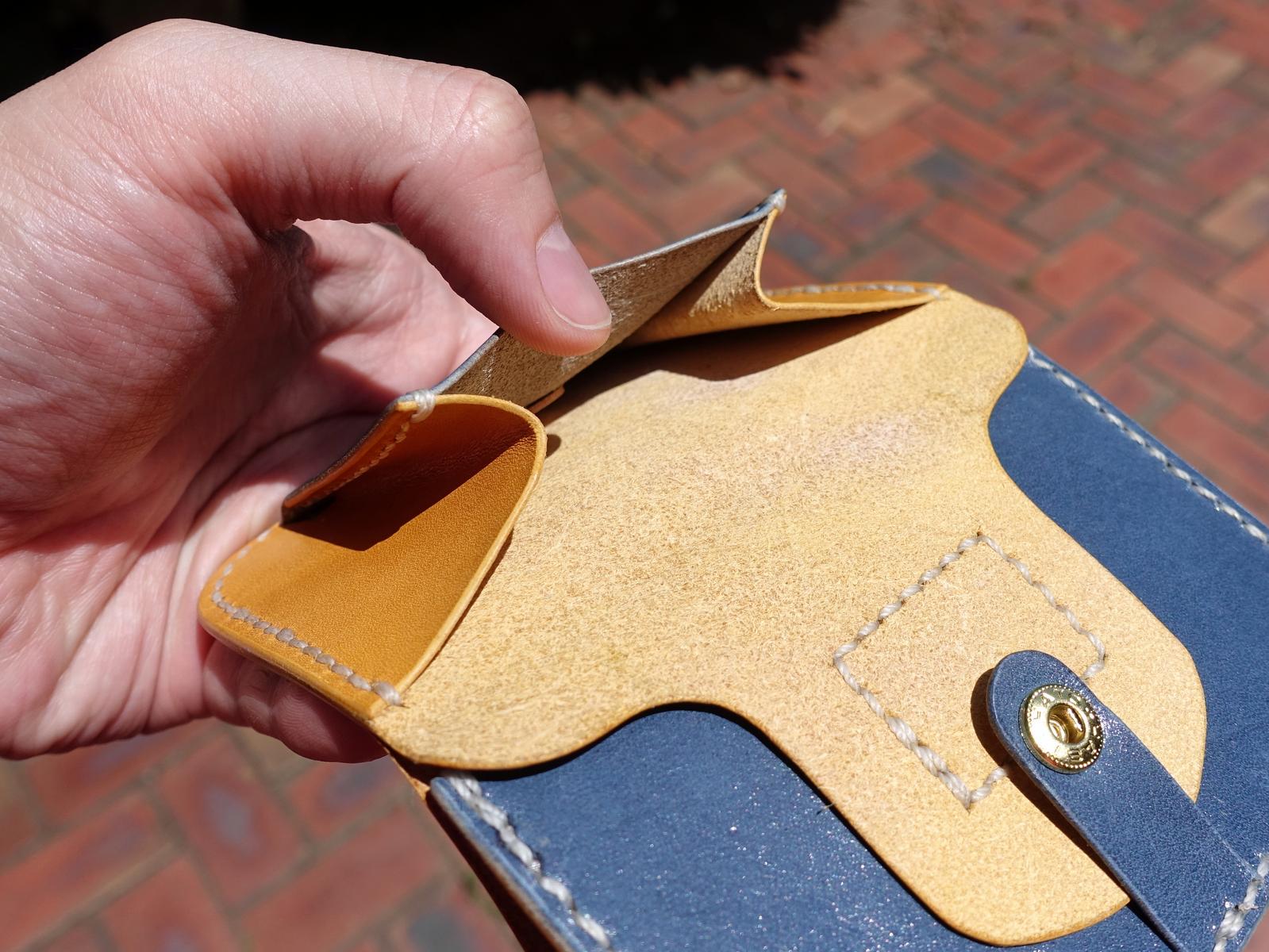 Of interest, the right-sided panels are attached only at the top, allowing the card slots there to be flipped out.

This would be useful for a travel pass or key card. 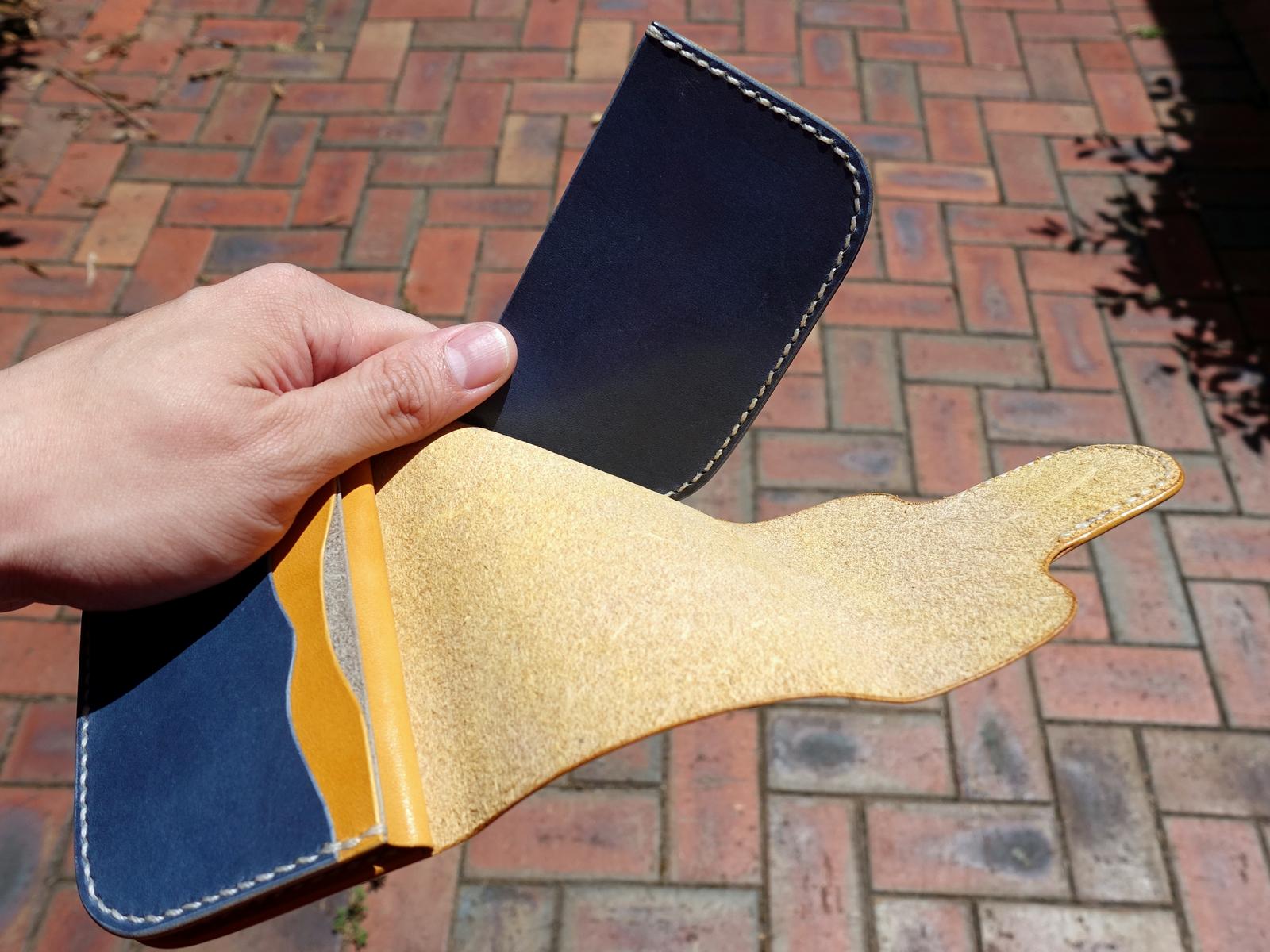 Overall, this is a larger wallet – with a bit of heft, between the size of a billfold and a mid-wallet, with a storage capacity in the same range as traditional layouts of comparable dimensions. 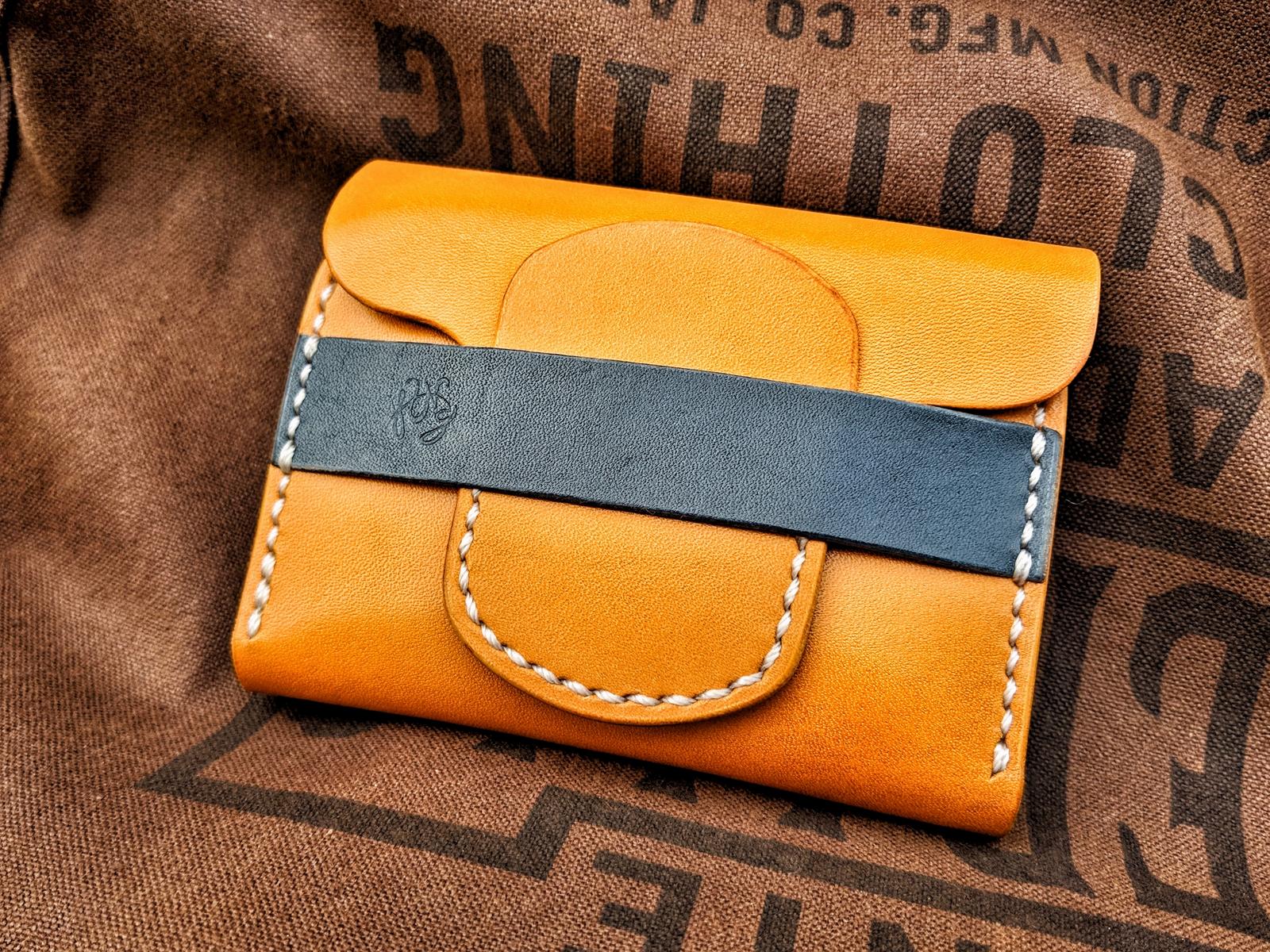 You’d have seen the natural version of this leather a few times on this blog already, though I must say Tochigi’s coloured offerings are very impressive also.

This saddle leather is tanned using Mimosa extracts, which impart a reddish tinge at baseline to the natural leather. Grain growth is dense, tight and fairly deep, giving the appearance of fine but intense texture. 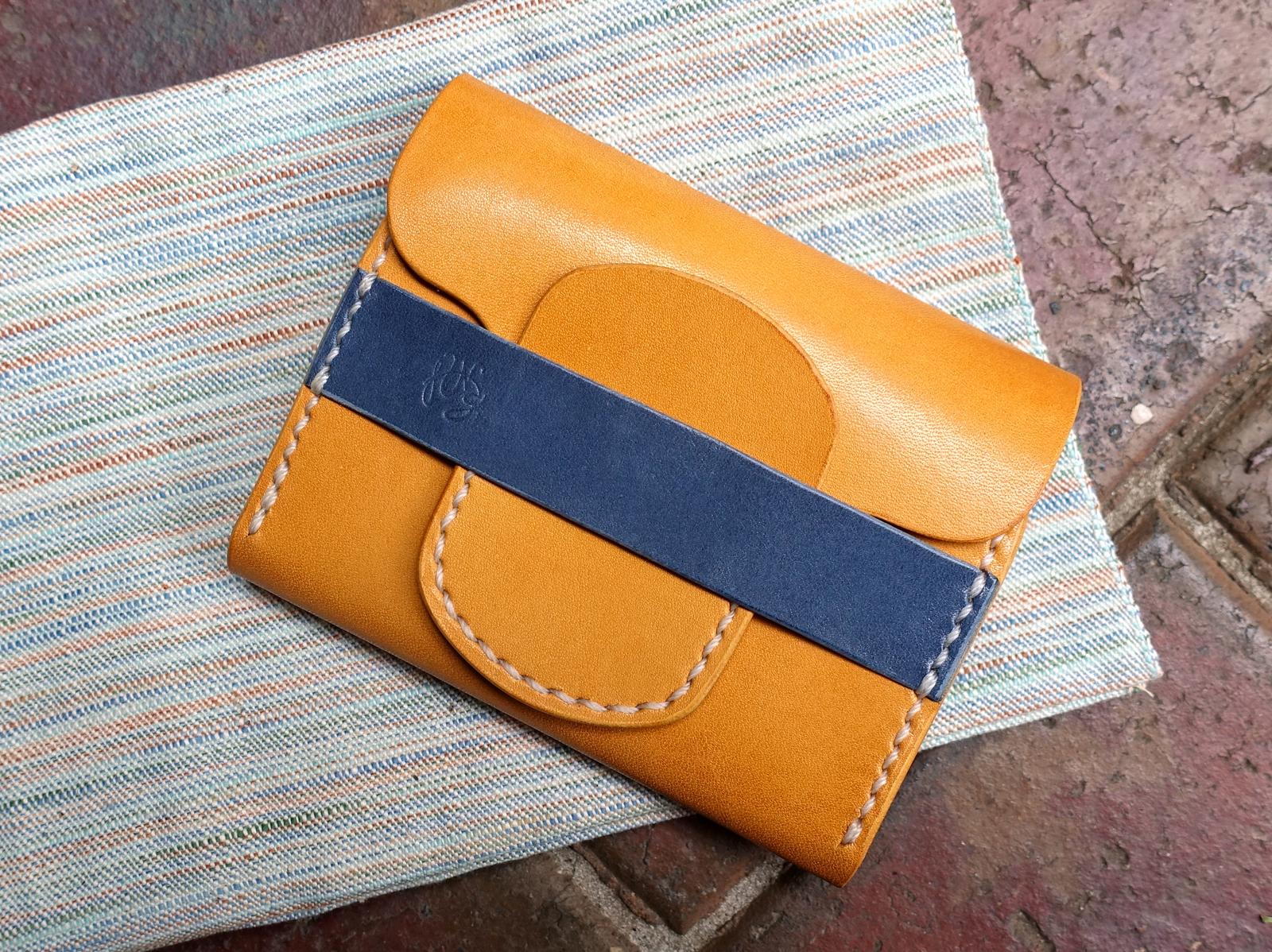 The colours are bright, organic & consistent in appearance.

The choice of colours here is worth mentioning. Mike has picked out a royal blue that matches the blue on Vault Tec’s vault-suits very closely, and indeed a wonderful colour it is. 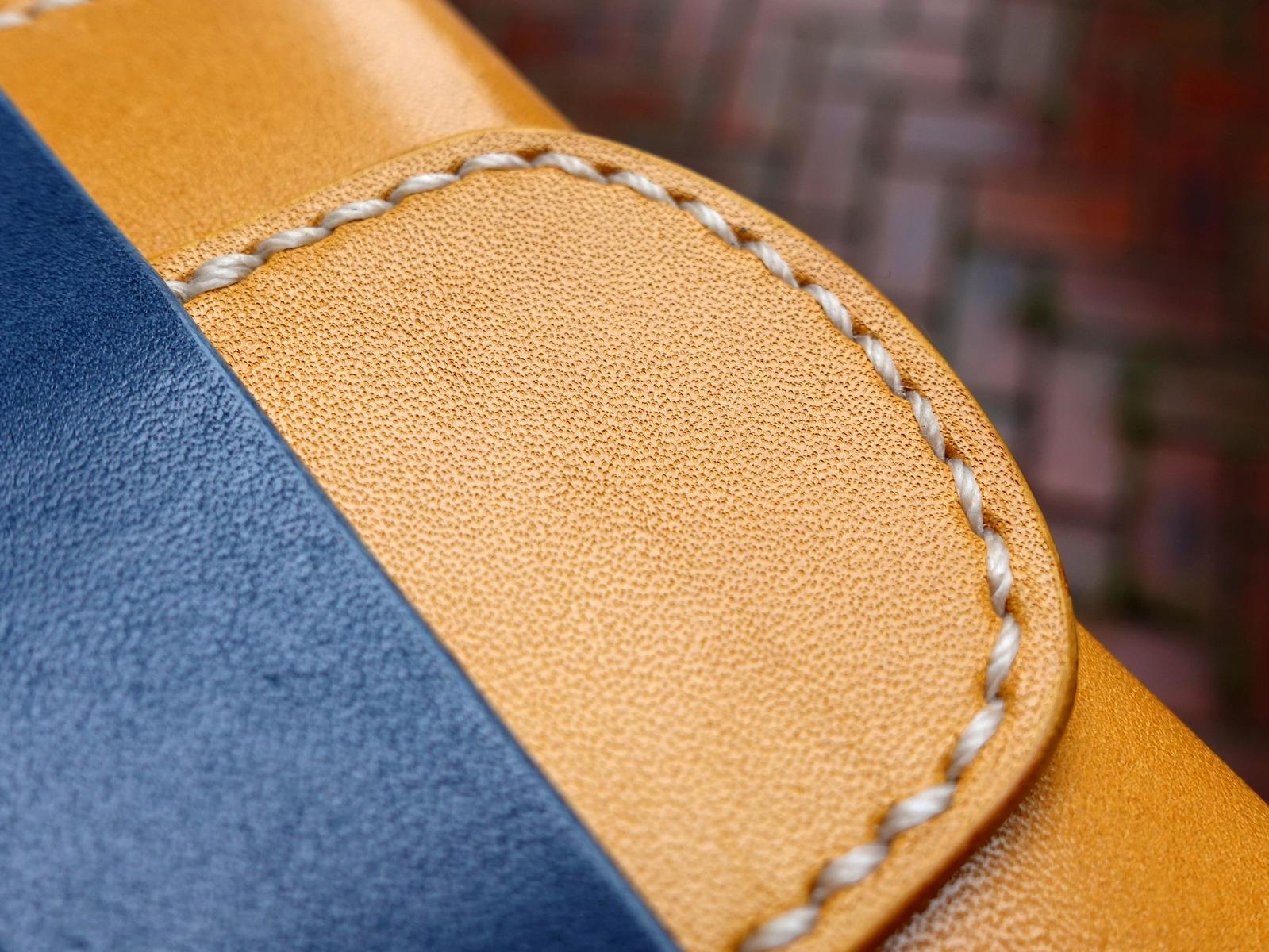 The yellow colour is a little trickier.

Way back in Fallout 3, the yellow trimmings on the Vault-suits were almost neon – a very bright, blue-toned yellow – this worked well for logo and environmental designs, but on clothing & accessories it fell a bit flat, almost tacky looking.

This issue was not as glaring in game, as the weathered appearance of clothing had softened the brightness of this particular yellow. When Fallout 4 was released, the neon yellow was updated to metallic gold on the Vault-suits, which looked much nicer. 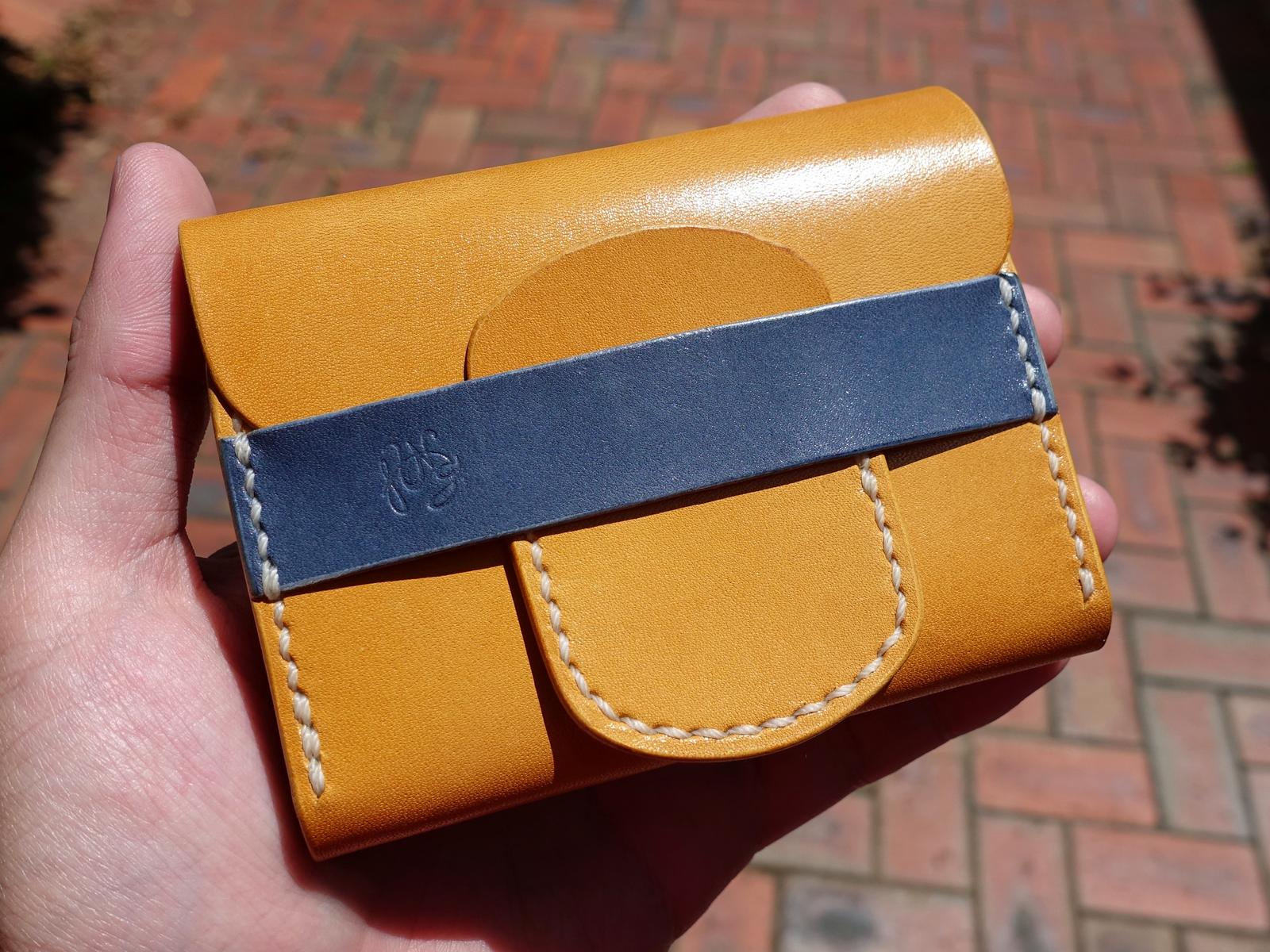 For a sleeker & period correct mix of colours, Mike found a nice mustard colour from Tochigi’s range. It is warm, with a red tinge. The combination of the blue & mustard works very well, I feel. This is not the pale yellow of Fallout 3 or the gold of Fallout 4, but it’s very close to the optimal colour for this blue/yellow combo as far as real-life clothing is concerned.

Similar to other Wild Frontier Goods pieces featured on this blog previously, the Vault Rider wallet has been hand-made. This means hand-cutting, hand-sewing and hand-burnishing. 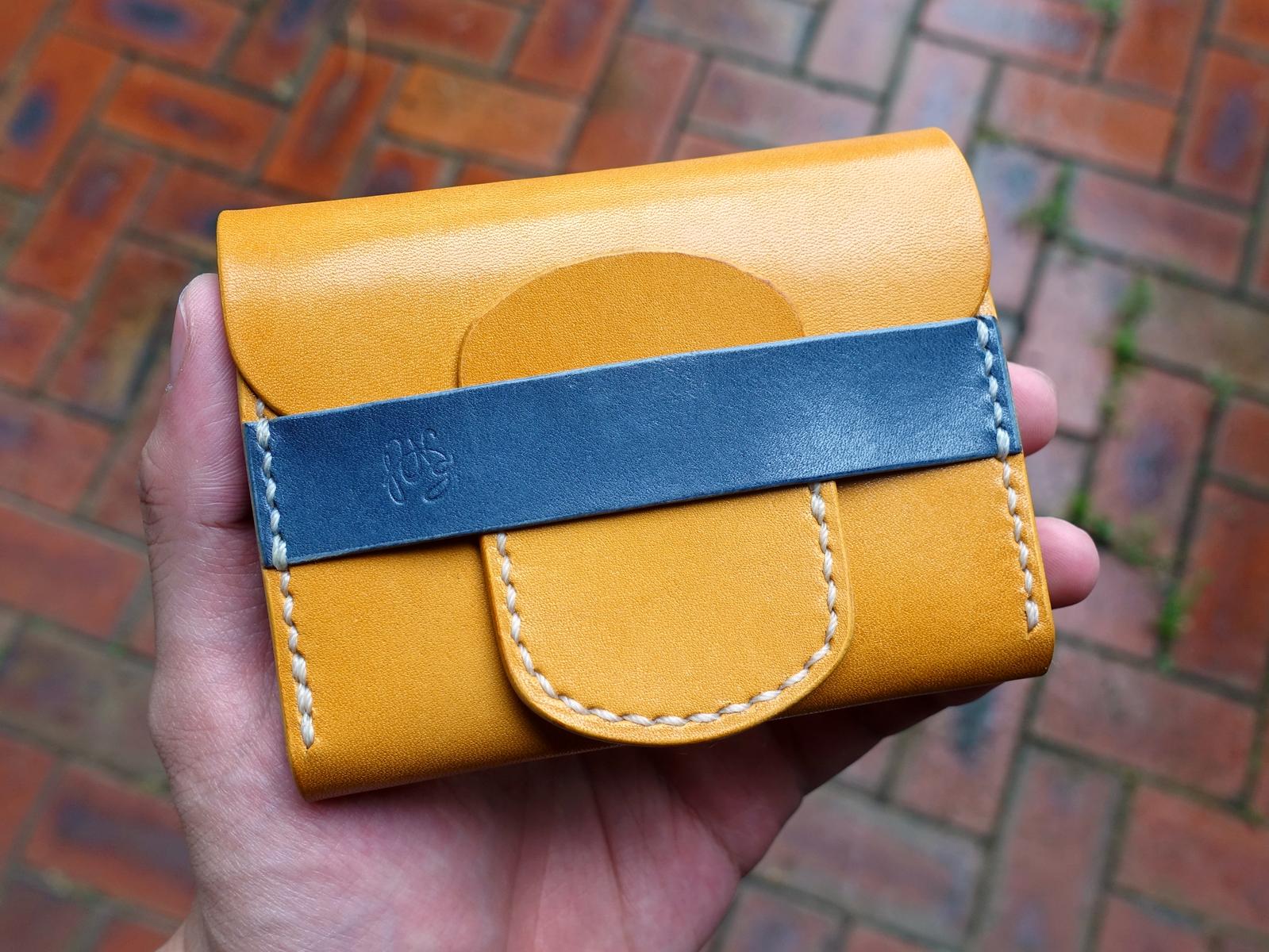 Hand-sewn saddle-stitching feature throughout this trifold. 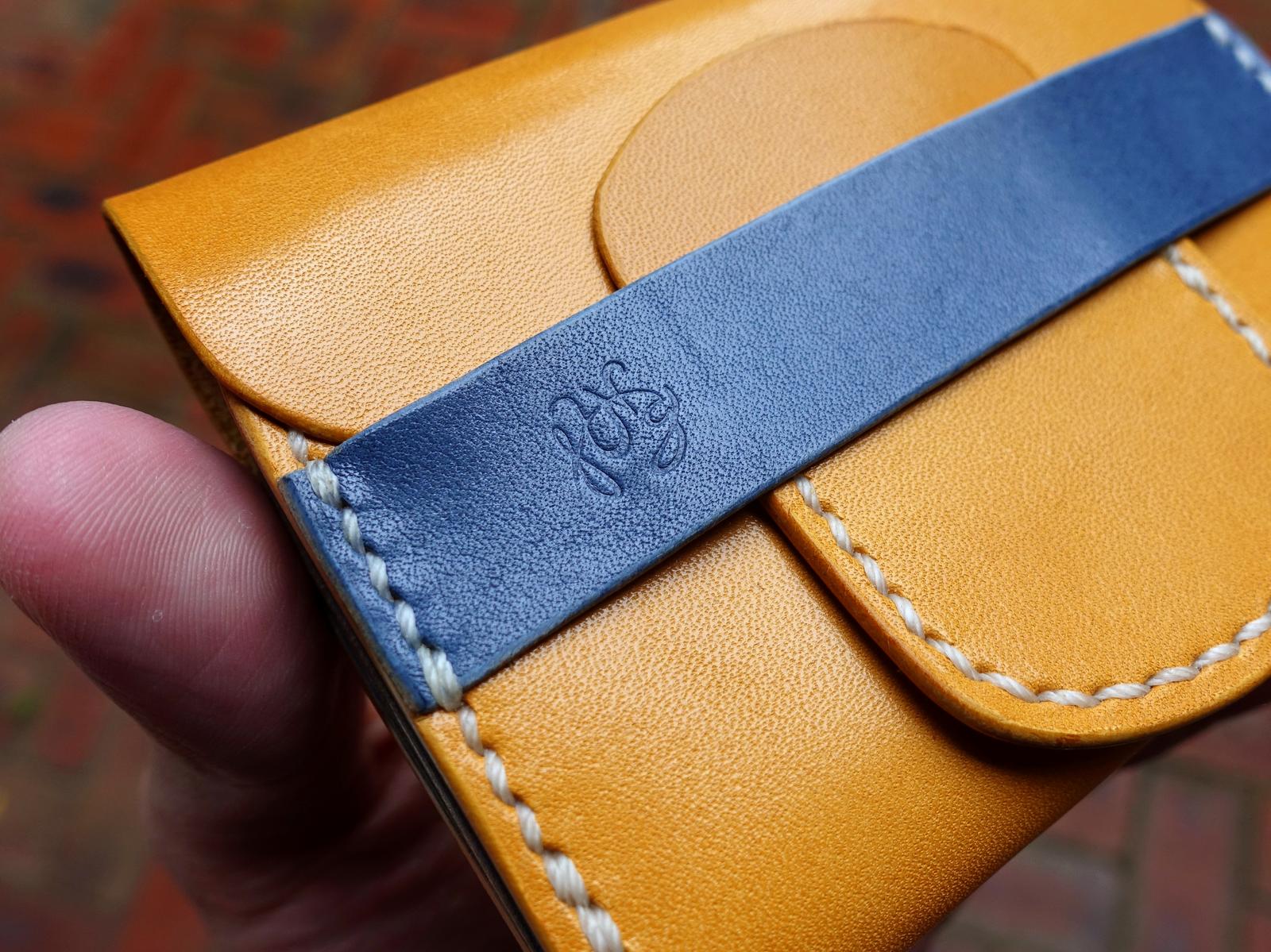 The cutting and paneling on this wallet is very neat.

Indeed, precision is key here, as a trifold design will end up rather wonky even if a few millimeters of error is made. 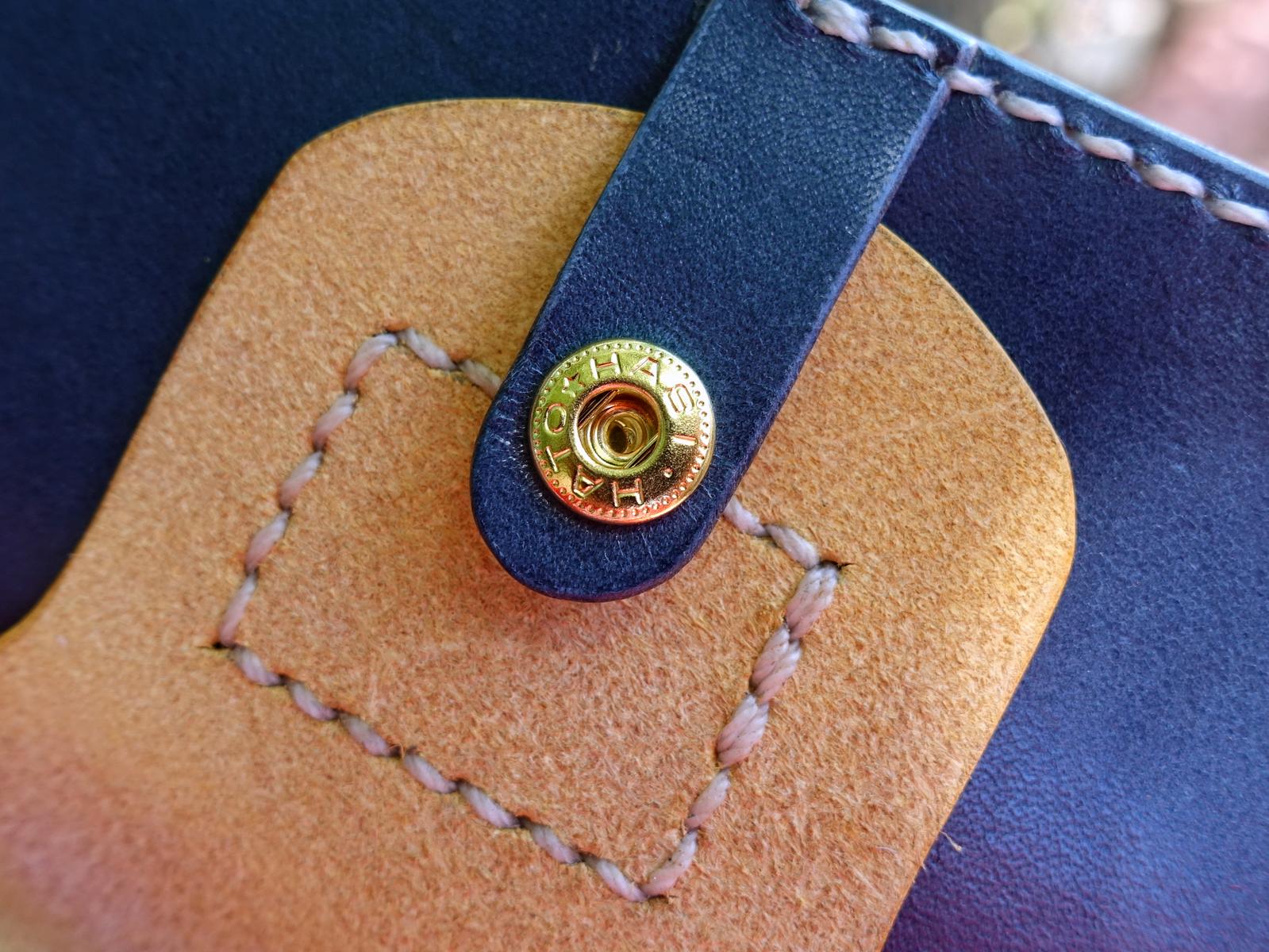 Mike has used a high quality Hasi Hato snap for the closure of the coin compartment.

You’ll notice here too, that each panel is indeed firmly stitched in, without use of glues. 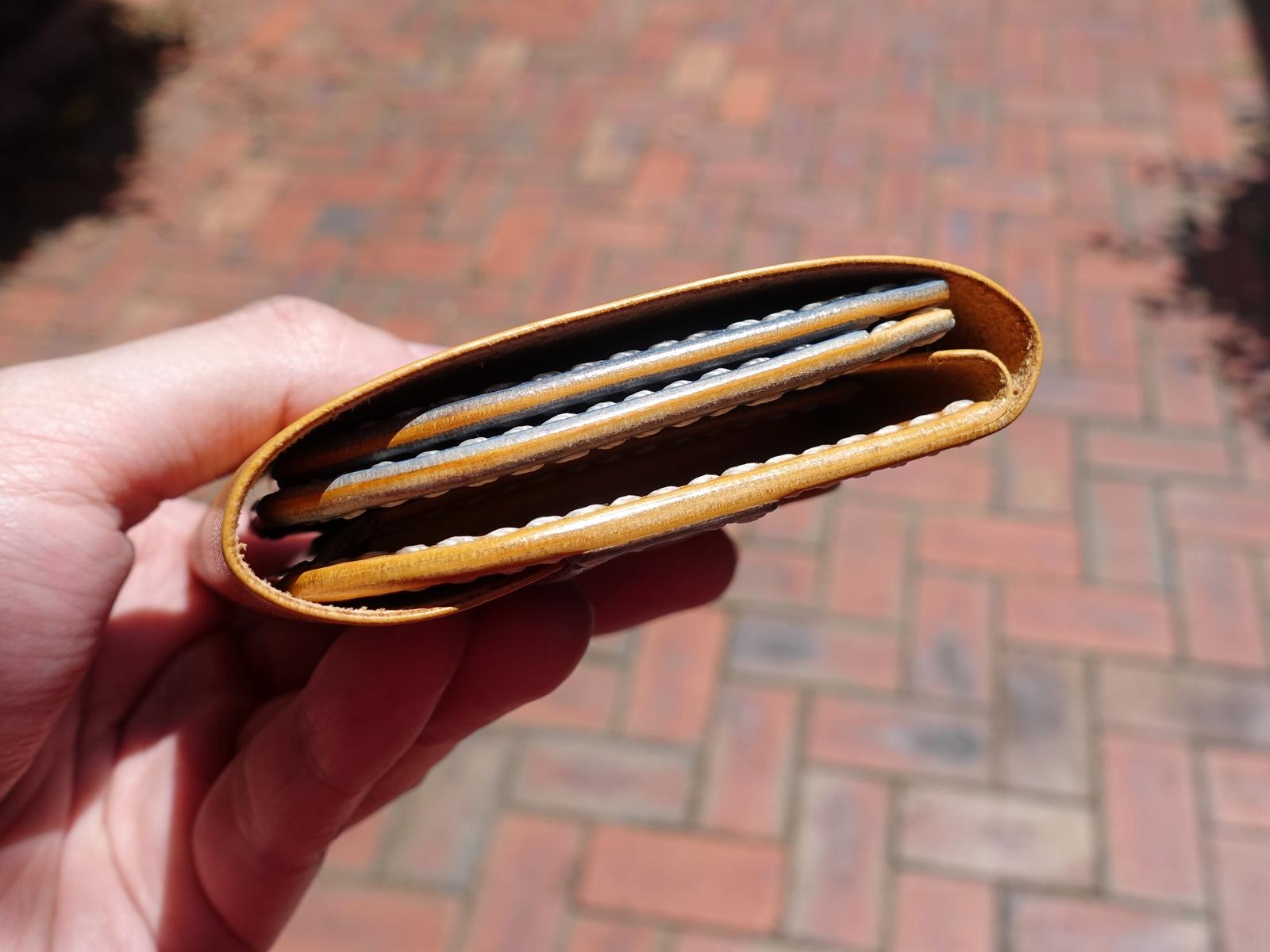 Finally, all the edges of this wallet has been beveled and burnished.

The result is not only very clean edges, but also a fantastic sandwich effect where the blue and mustard panels overlap.

Regular readers of this blog would know that the garments and leathers featured here are mostly derivative of post-war Americana, whether it be an artisanal Japanese interpretation of the aesthetic or a modernised, heritage-revival styling. This is likely the closest way of dressing, IRL, to the retro-futuristic designs in the Fallout series, without veering into cosplay territory.

On this same note, I’ve been fairly disappointed with Fallout merchandise clothing over the years, mainly because they have failed to capture the authentic vibes of Americana. Take Fallout merchandise wallets for example – mostly very boring bifolds, either very poorly constructed or offering no further design evolution from a basic billfold. Of course, most gamers cannot afford a $200+ wallet, so it is understandable that gaming merchandise are poorly made, yet I feel it is a shame that Bethesda has not thought to release a limited line of genuine, Americana style loot. 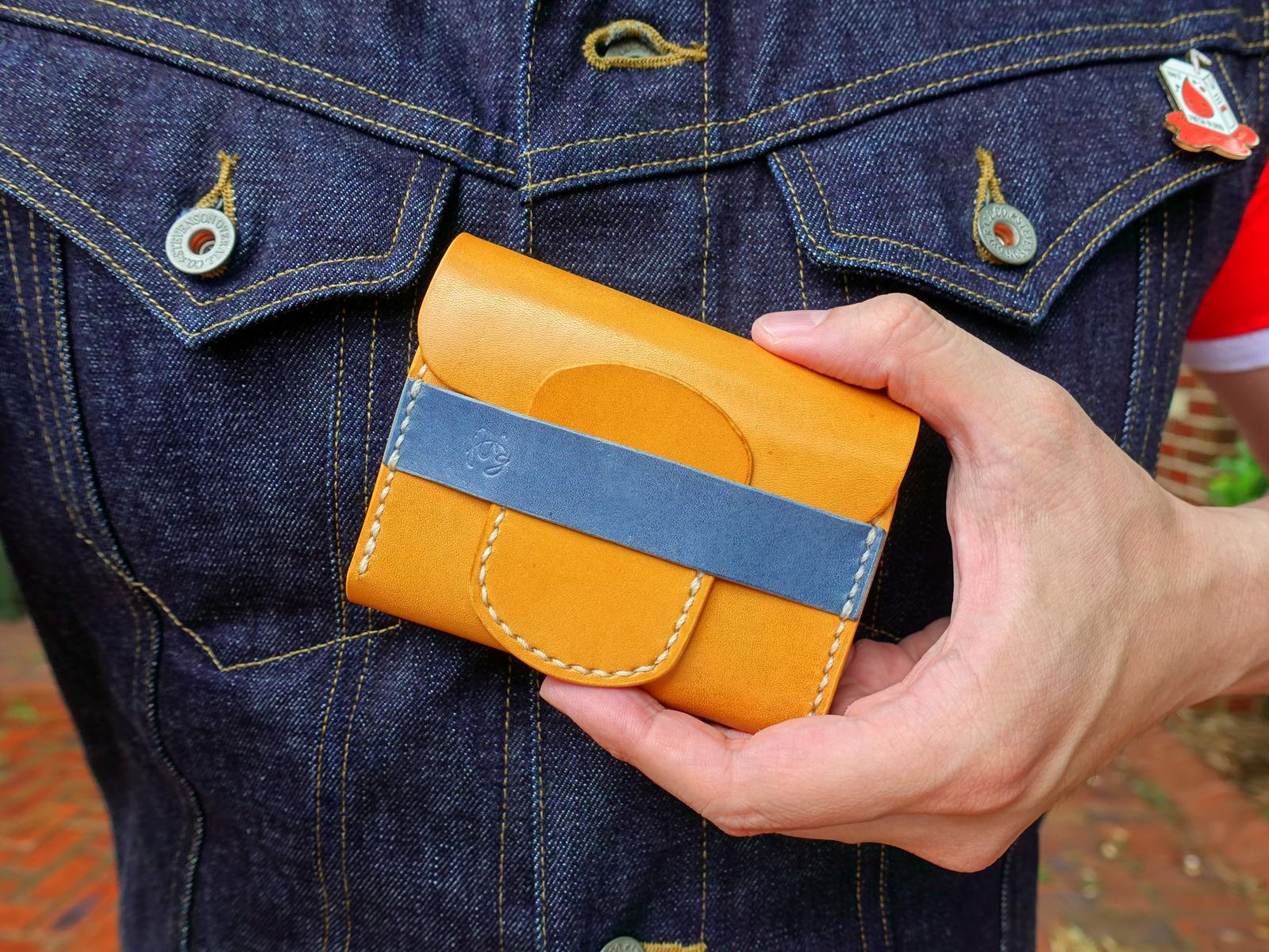 That being said, there is plenty of opportunity to incorporate some of the themes and motifs of Fallout into my wardrobe, which does include many custom pieces, and this Vault Rider wallet from Wild Frontier Goods is perhaps a first attempt at such.

Of course, no leather wallets have been shown in detail in any of the Fallout games, so it is hard to say what an in-game wallet might have looked like. However, I think the Fallout concept has been executed very nicely on this Vault Rider wallet by Mike, both in terms of the play in colour combination and creating a retro-futuristic look.

The Vault Rider has managed to capture the style of Fallout game-art through careful colour selection and sleek construct. I can imagine one of the Tunnel Snakes or Atom Cats carrying this wallet in the Fallout universe, for sure. 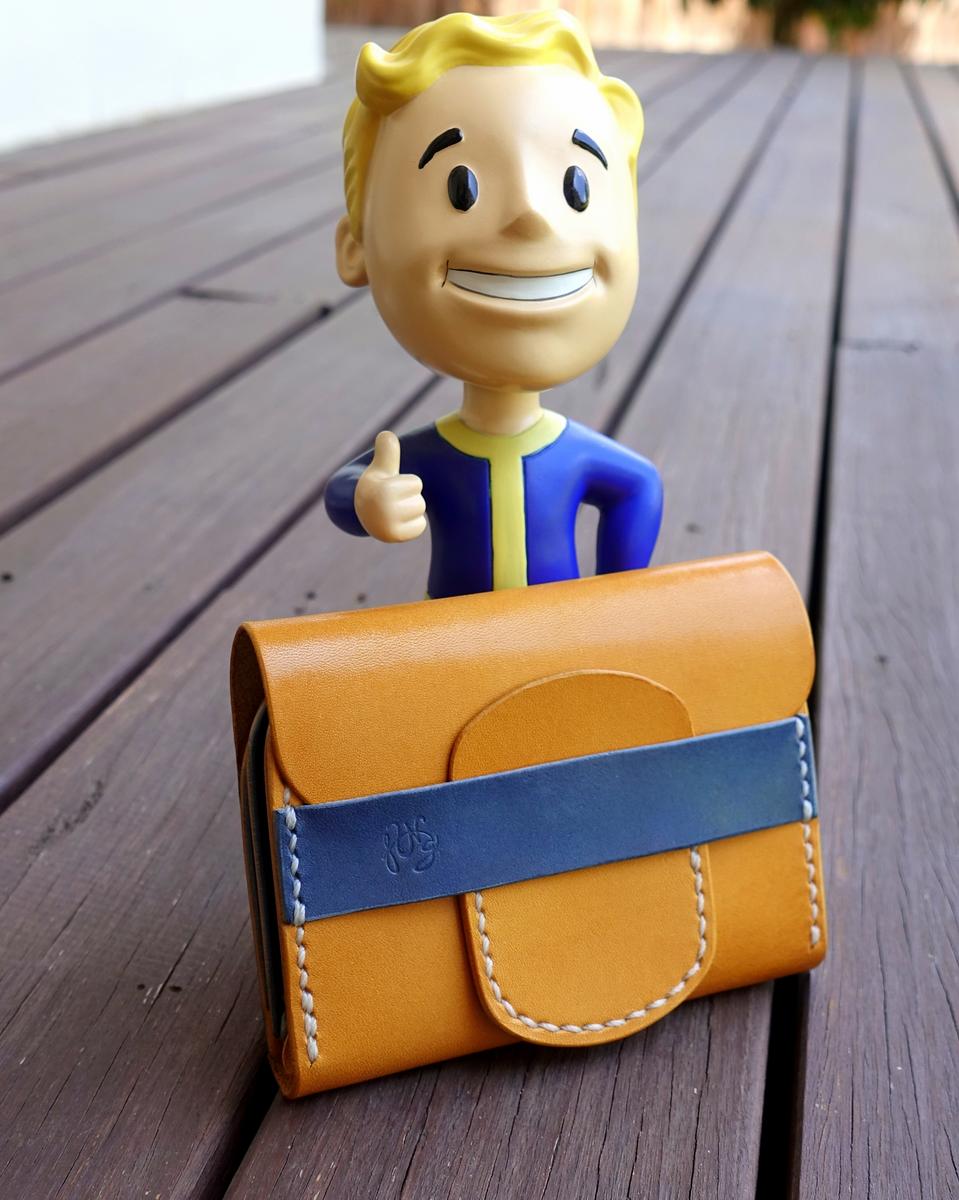 The Fallout theme aside, Mike’s Makimono design has taken the basic trifold wallet and amped the curves and detailing right up. The paneling is novel, yet easy to use. It’s not necessarily the most space efficient, and neither has carrying capacity been maximised, but I don’t think that’s what Mike had in mind for the Makimono.

This Vault Rider wallet, similar to its other Makimono brethren, is all about showcasing the colour & grain of leather – it has a unique flavour, a futuristic yet somewhat rustic vibe. The outshell layout will tie together different colours nicely, or it can thoroughly showcase a single leather.

The wallet is also practical, allowing quick use of cards, easy access to cash and secure storage for coins. 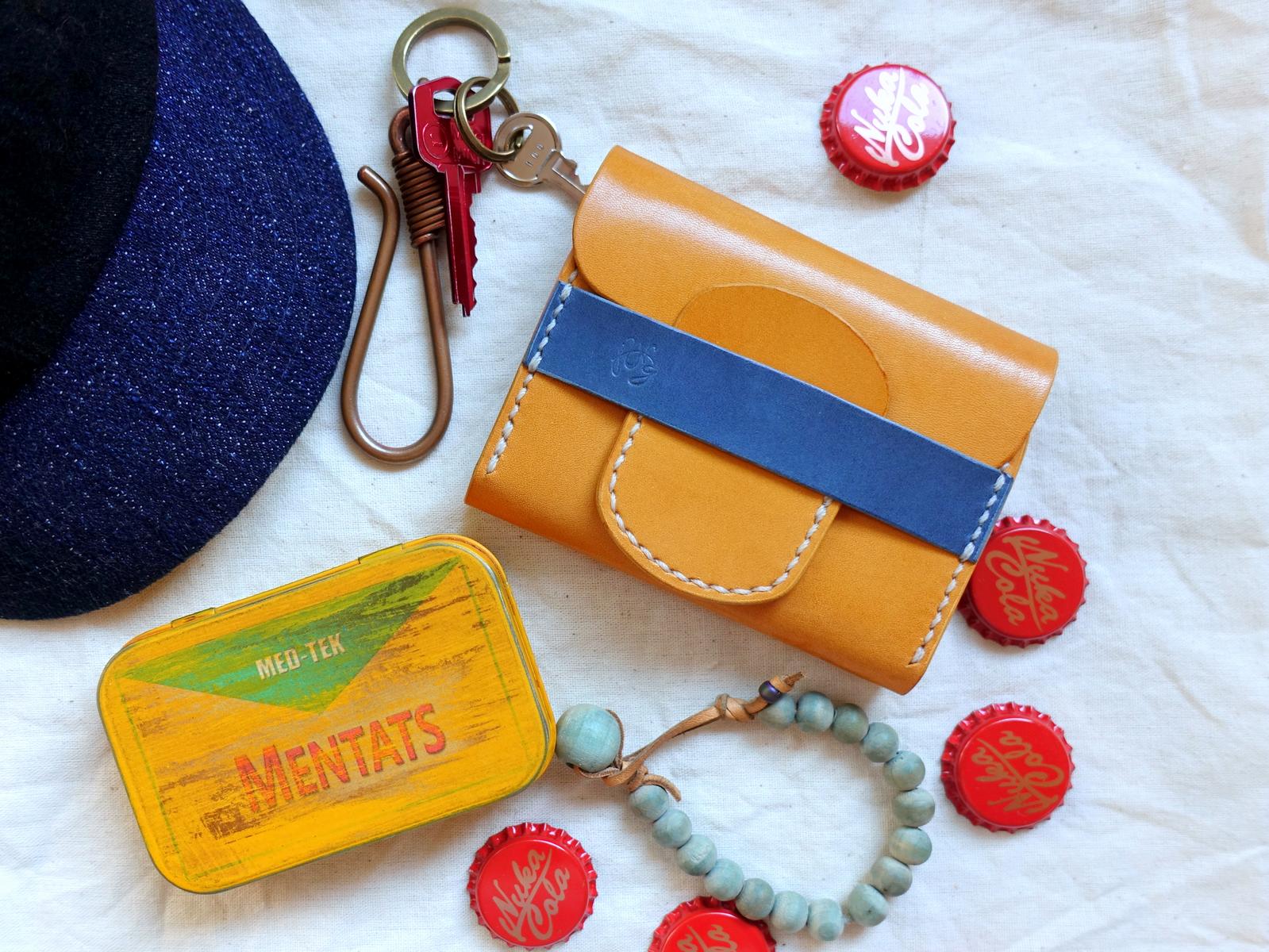 The relatively bulk of this wallet – at 2 cm in thickness when fully loaded – is not for the beginner. The Makimono wallet is an addition to your wardrobe that would only make sense if you have already started wearing heritage-style garments, with more rugged fabrics and retro details.

It is, however, a fantastic wallet to complete an Americana outfit. The layout of the wallet has much customisation potential, thus the Makimono comes highly recommended if you are after a specific colour combo – this really is a great piece with which to personalise your kit, as you can see with this one off Vault Rider version. Denim and work-wear fans in particular, I feel, will really enjoy this new design. 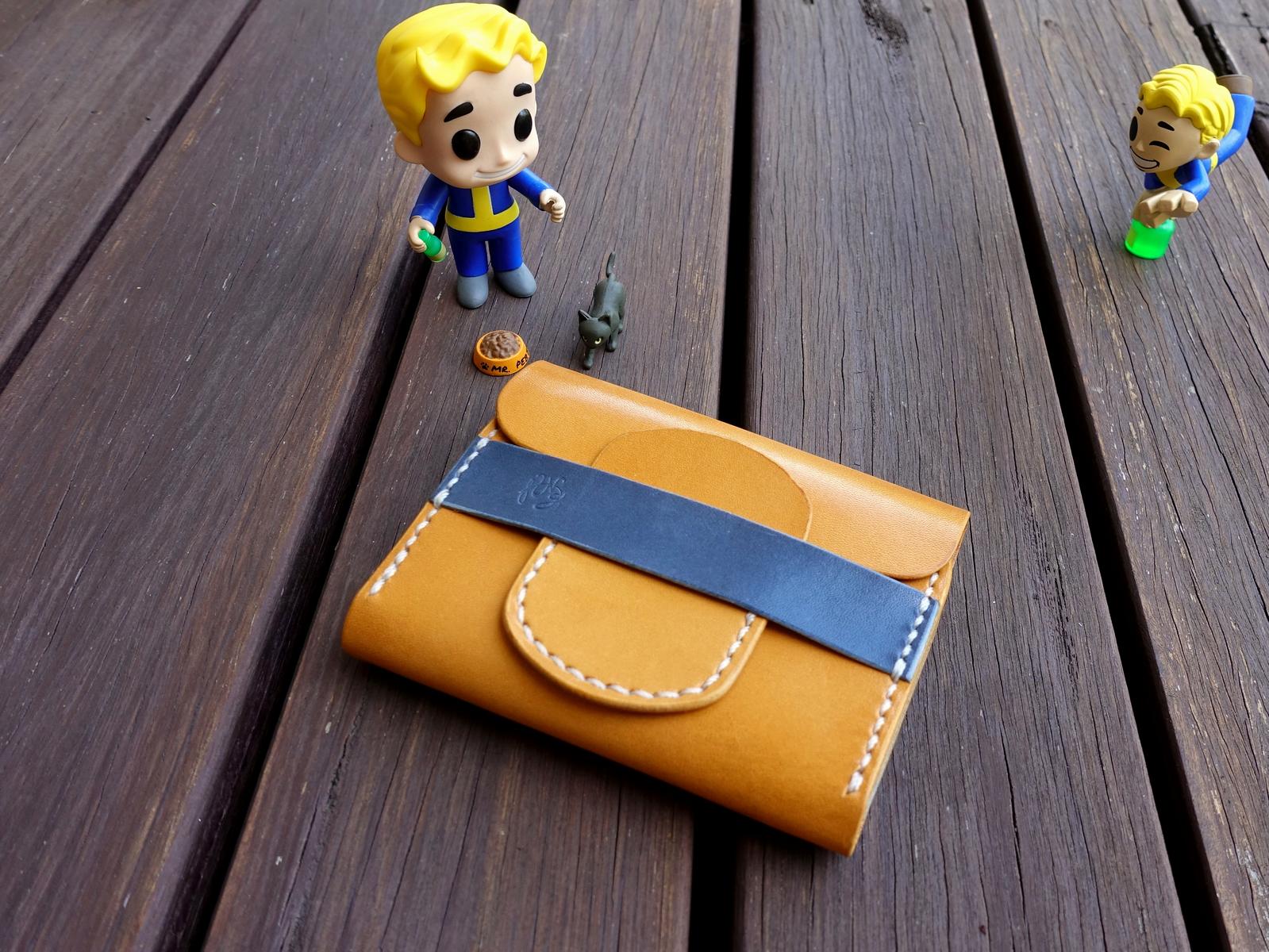 Other than the new layout, Mike’s crafting of this wallet and the materials selected are both top notch. The sewing and finishing on the Makimono is one step above what I have experienced with Mike’s previous wallets in 2017/2018 – there are no notable errors or imprecision in its making. The materials continue to be high end, and very Japanese, even if the more folksy elements such as indigo dyeing or persimmon painting have not been used on this Vault Rider.

In considering how these individual aspects add up to a very coherent & refined whole, I’d say the RRP of the Vault Rider (slightly more expensive than the original Makimono) at $240 USD is good value indeed.

On an interesting note, as far as natural leather is concerned, whilst I favour Shonan’s saddle leather over Tochigi’s version, Mike feels the opposite. This is my first time seeing Tochigi’s coloured saddle leathers though, and handling this Vault Rider in person I can definitely understand why Mike likes them so much. The grain has good growth whilst still retaining a relatively regular appearance, the colours are vivid, and the sheen is just right. The leathers feel good to the fingers too. 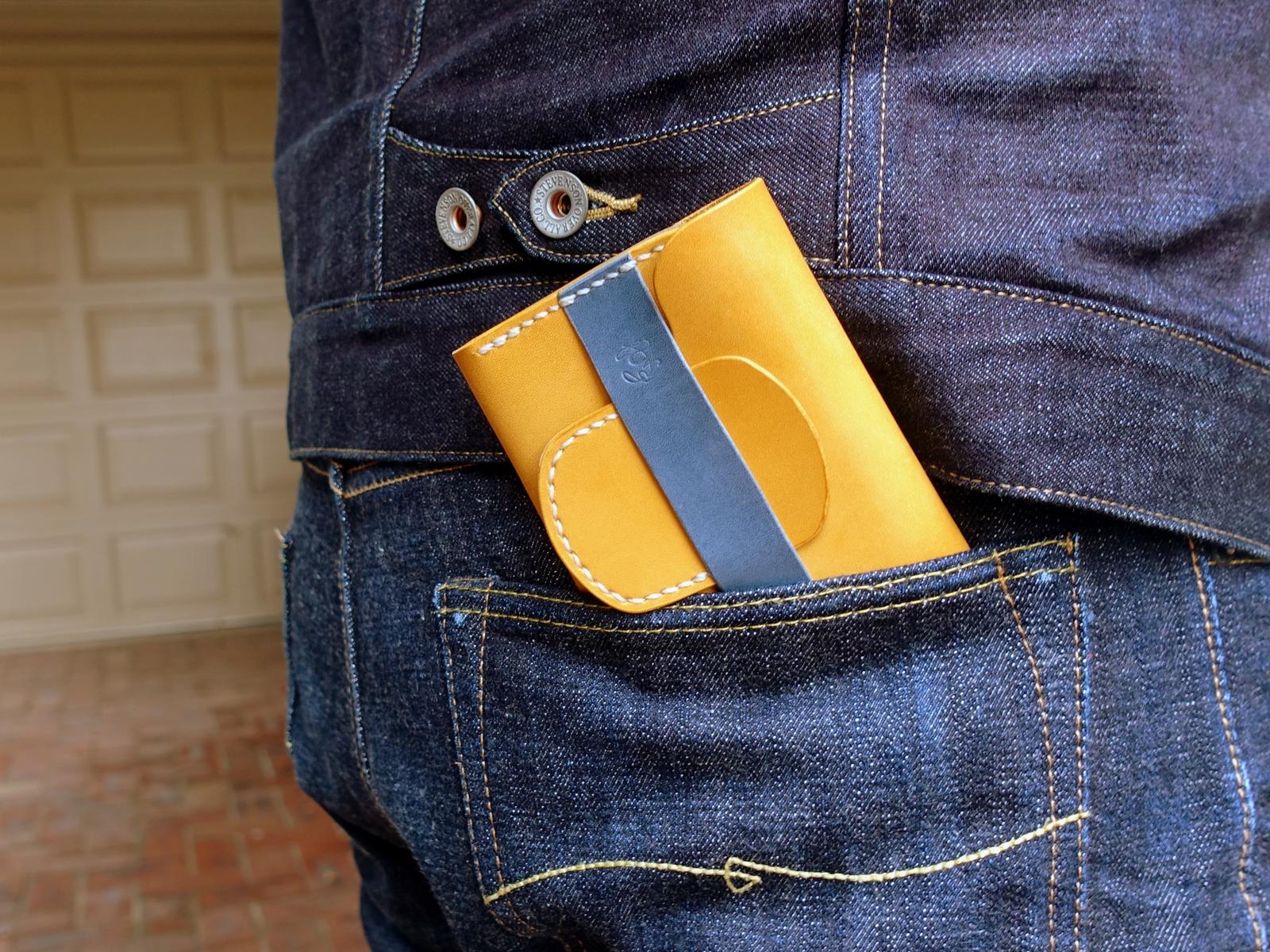 All in all, this Vault Rider wallet from Wild Frontier Goods is a pretty awesome piece. One of the most unique wallets in my very large collection, and to be honest it turned out better than I thought it would have based on my preconceptions when chatting with Mike about imitating the Vault Tec colour combo.

More than just a Fallout themed wallet, I do think the Makimono is a great design to spice up other Americana outfits, whether it been denim streetwear or retro sportswear – it allows great showcasing of leather character and colour, not to mention its unique layout and fairly distinctive looks.

Wild Frontier Goods’ current portfolio of work is definitely worth checking out, and if you are wanting personalised colours on your wallet, then Mike’s your man. Visit his website or contact him on Instagram – let him know the other Mike sent you!