For a very long time now, the oak bark belt has been one of the essential components of my wardrobe. After getting back into the hobby in 2016, finding that my previous oak belt makers are no longer active, I was fortunate enough to discover Tom’s workshop of Hawkmoth Leather Co., which specialises in oak bark belts.

A couple of years ago, I reviewed Tom’s ‘Natural’ Standard belt, and found it to be one of the most original creations among what is a fairly saturated and monotonous ‘craft belt’ market.

This time, we’ve got something a little bit more elaborate – Tom’s ‘Punjab’ belt, which is currently incorporated into Eastman Leather’s ELMC collection.

This is a very welcomed return for Hawkmoth back on the blog. Let’s take a look at this interesting strap!

All of Tom’s belts come with a fantastic carry pouch which has been handmade from military canvas and parachute webbing.

It even has a leather handle, and can be easily hung on a hook. 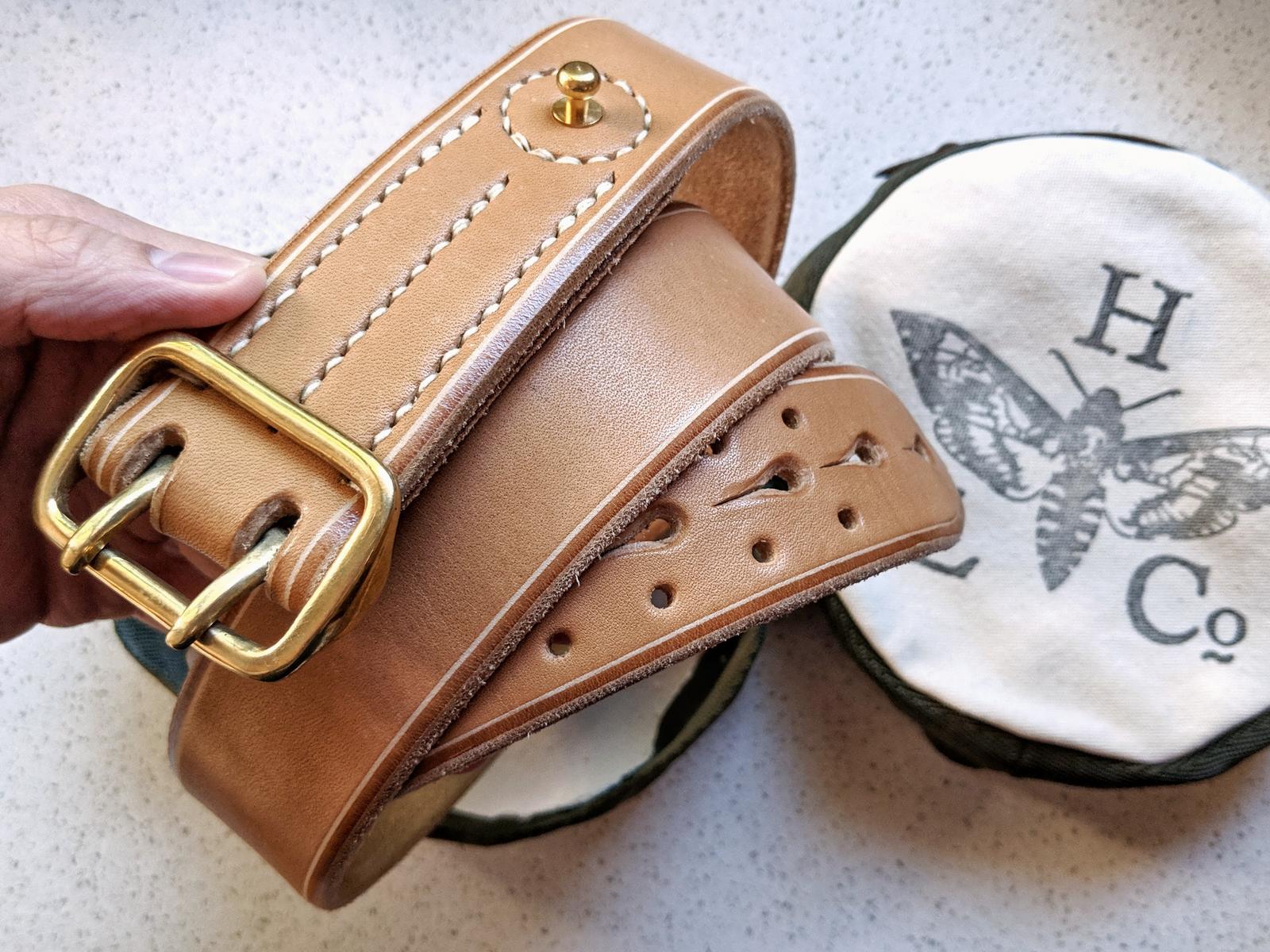 The design here is inspired by military canteen holders of the 20th century.

Fans of British workwear and military clothing would recognise this Punjab belt as a modernised version of the Sam Browne belt. 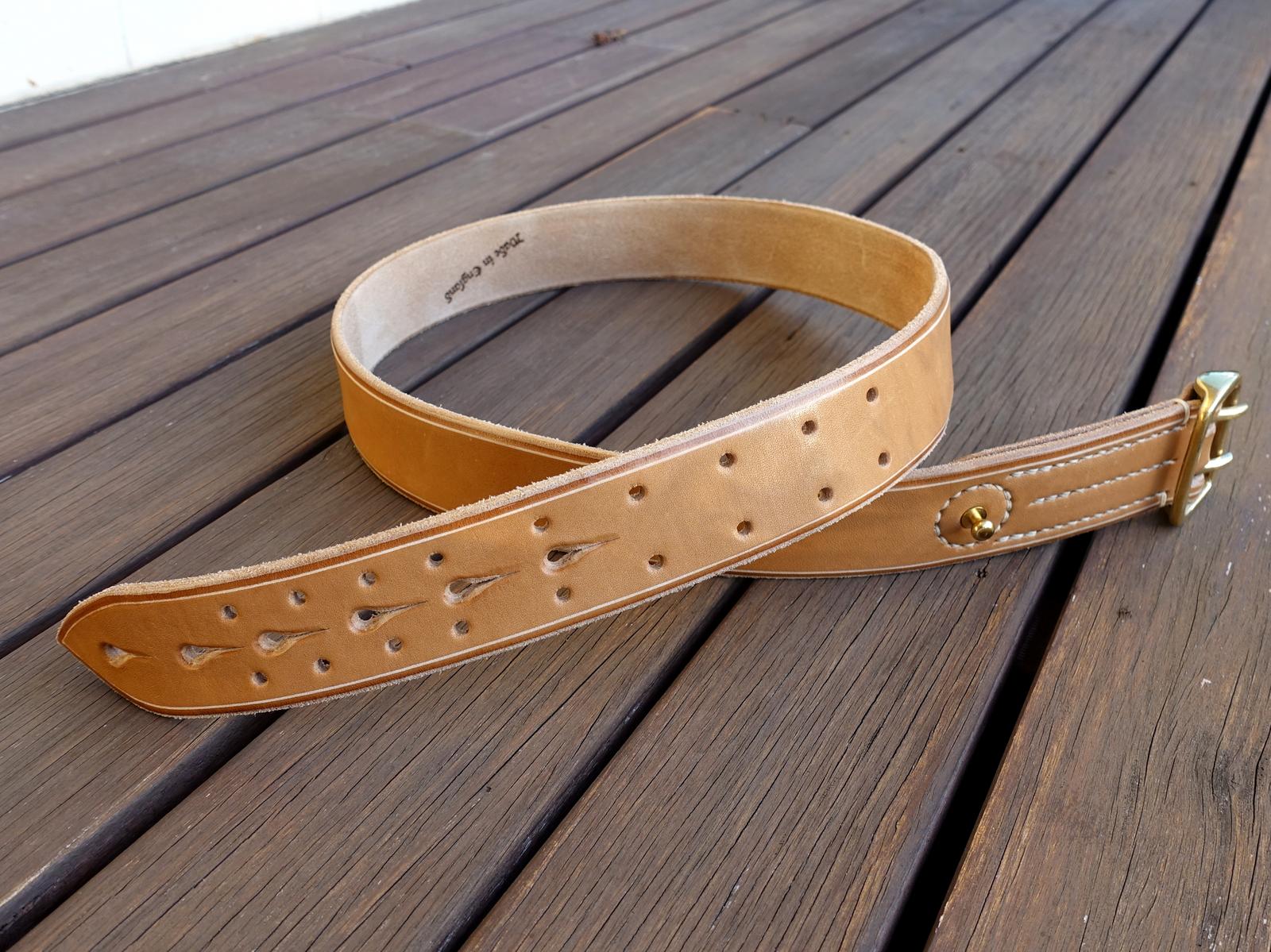 History buffs will no doubt know that Samuel Browne had designed his name-sake belt to better carry his sword, after his left arm was chopped off. Tom has paid homage to Browne by naming this belt after Browne’s service with British Indian Army’s 2nd Punjab Irregular Calvary regiment. 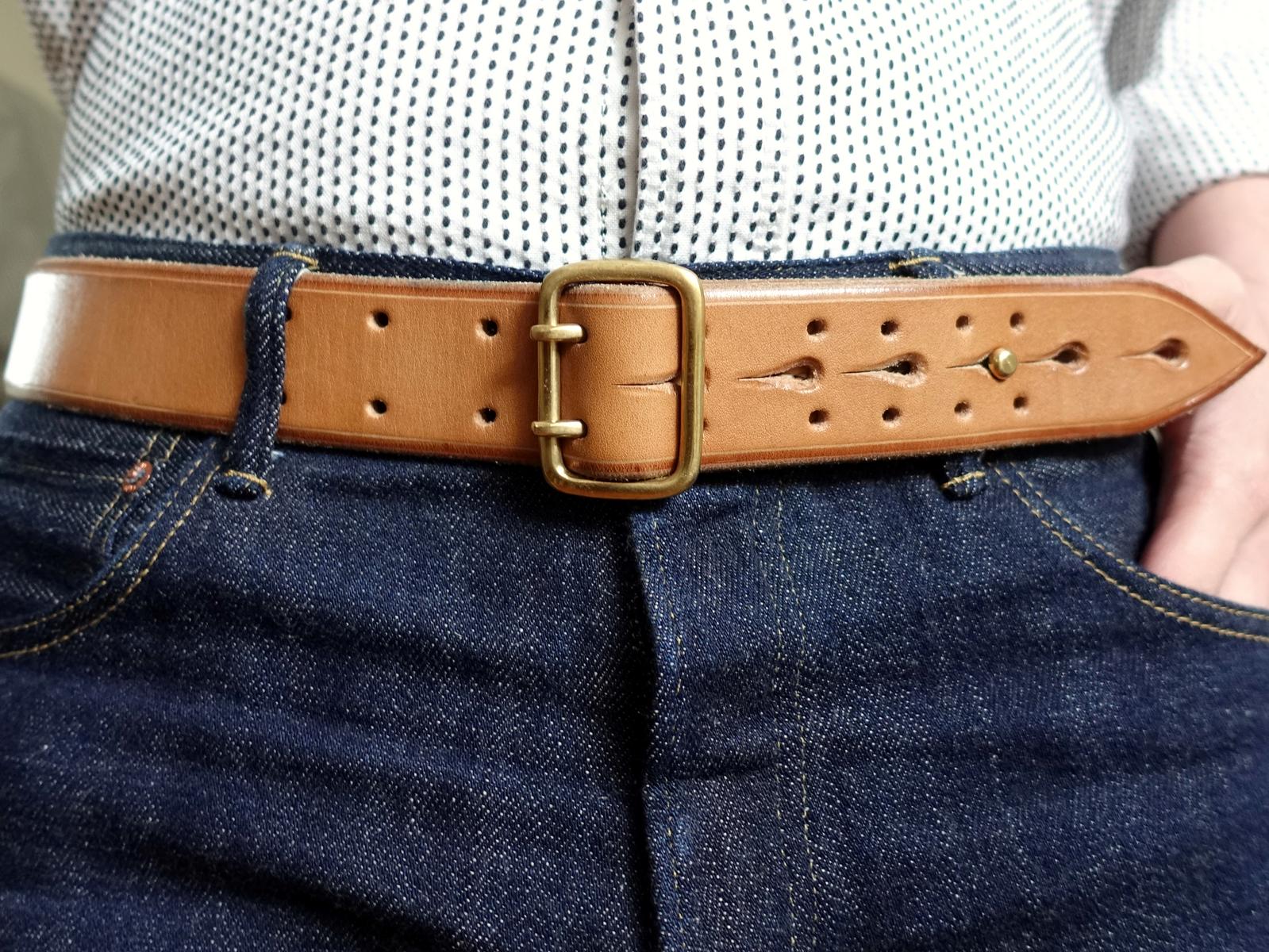 Compared with Sam Browne’s original, Tom’s Punjab belt has been streamlined and minimised to accompany jeans and modern work pants. Gone are the cross-body shoulder strap and the D-ring & hook attachments for military gear. 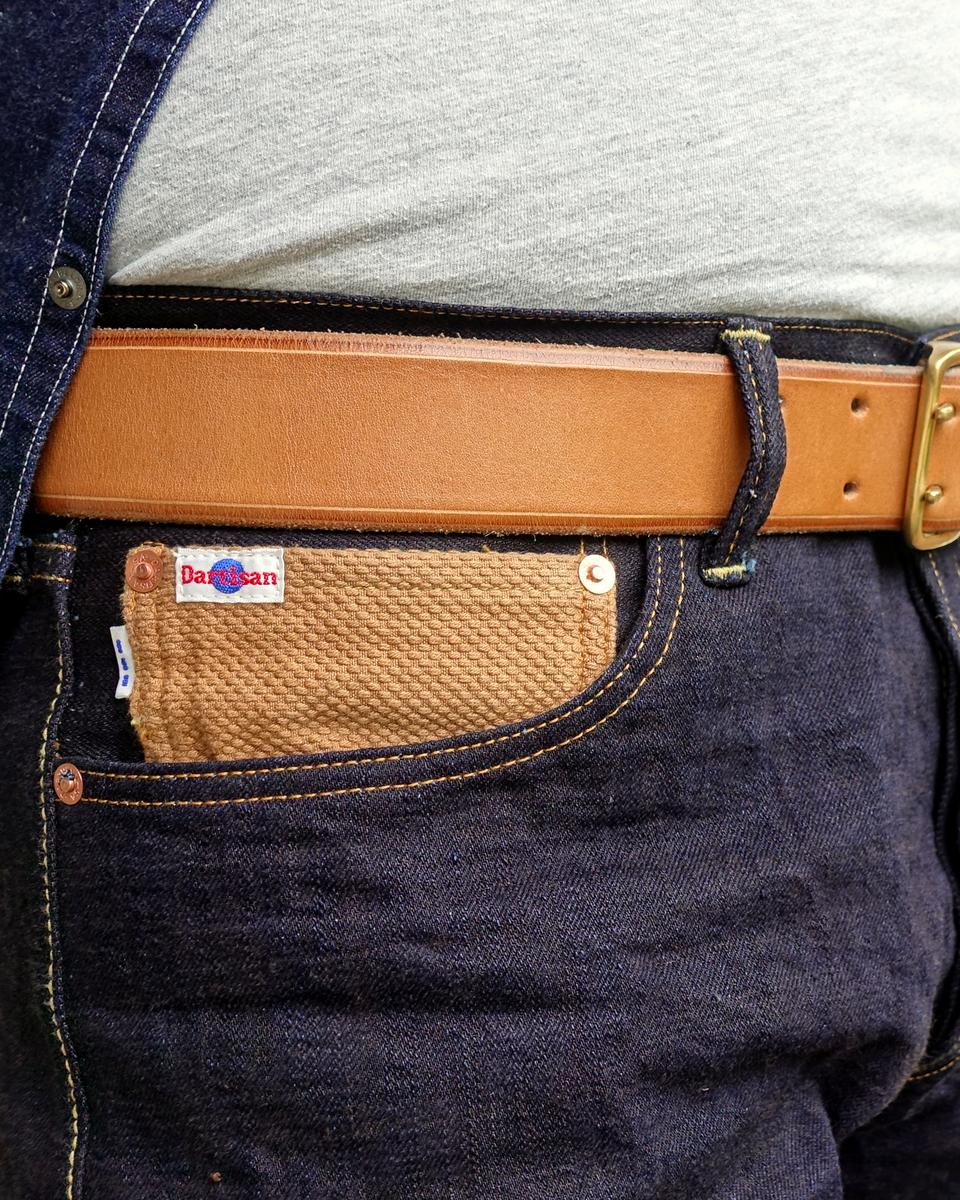 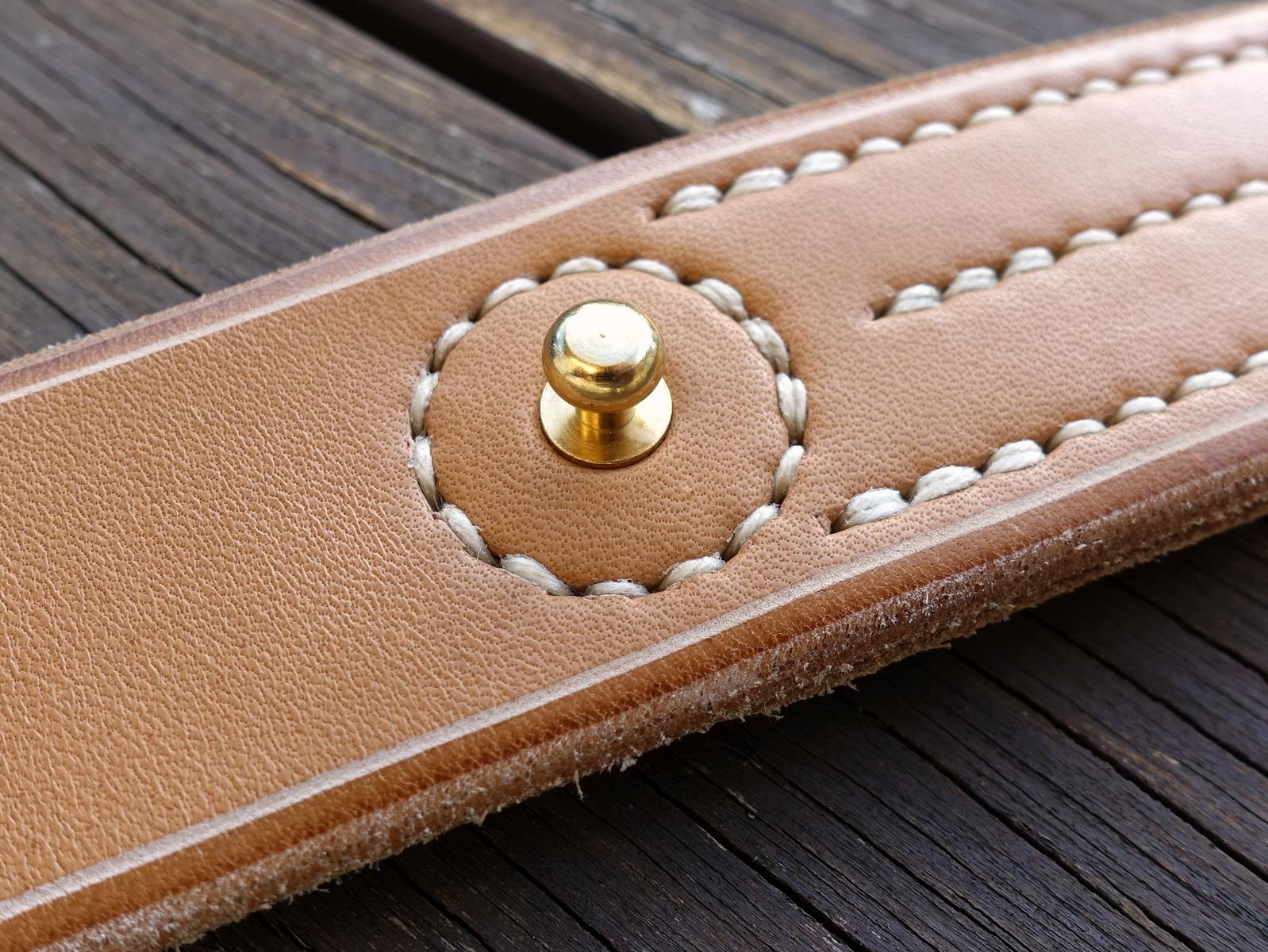 The Punjab belt is worn in a curious way, the stud closure allowing the strap to sit on the outside of the belt loop on its second pass-through. 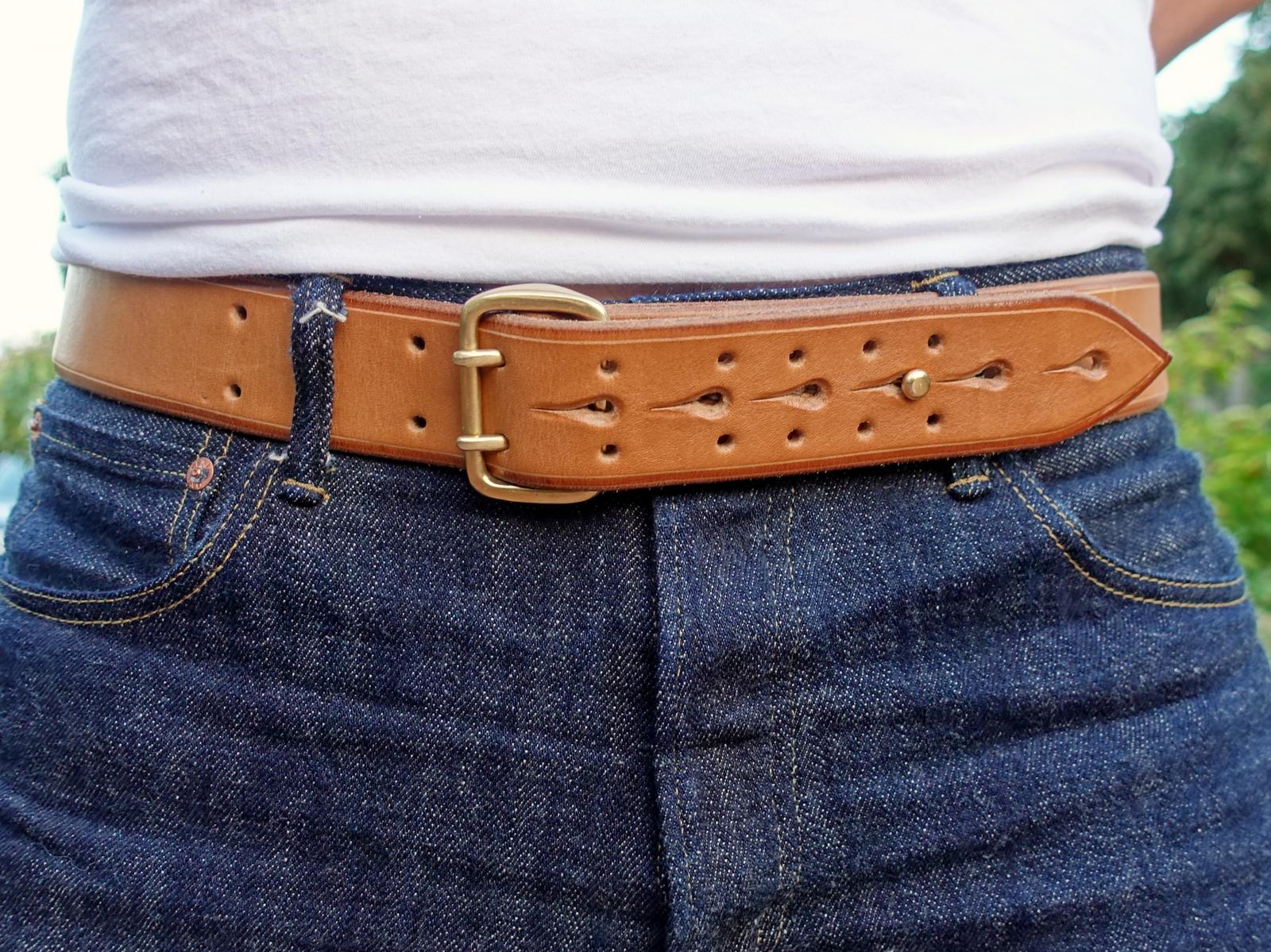 There are many ways you can wear this belt of course, and my own photos here are just a couple of examples.

Long time readers of the blog will know about Baker’s oak bark tanned leather – my favourite leather for a belt strap. 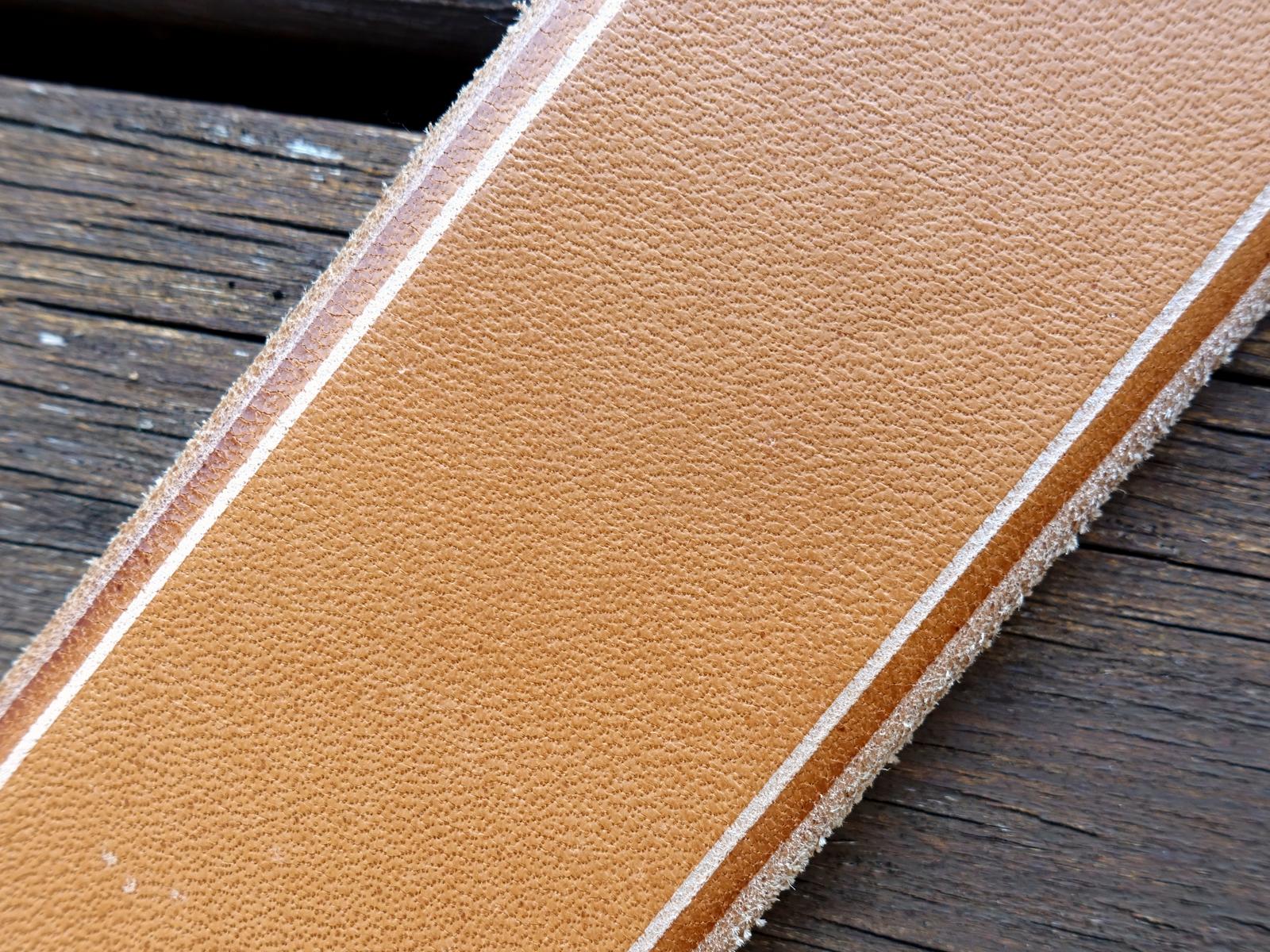 I have written quite extensively on this leather over the past decade, and my thoughts can be summarised as below:

“There are only a handful of tanneries left in the world that slow-tan leather, and J & FJ Baker is the last tannery left in England which still practices the ancient method of oak bark tannage.

At the Baker tannery, it takes on average 18 months for cattlehide to be made into oak bark leather, with the actual pit tanning of the hides occurring over at least 12 months and 1 day. Each hide progresses through pits with increasing levels of oak tannins, up to a maximum of 72 pits for leather which is intended for shoe soles. 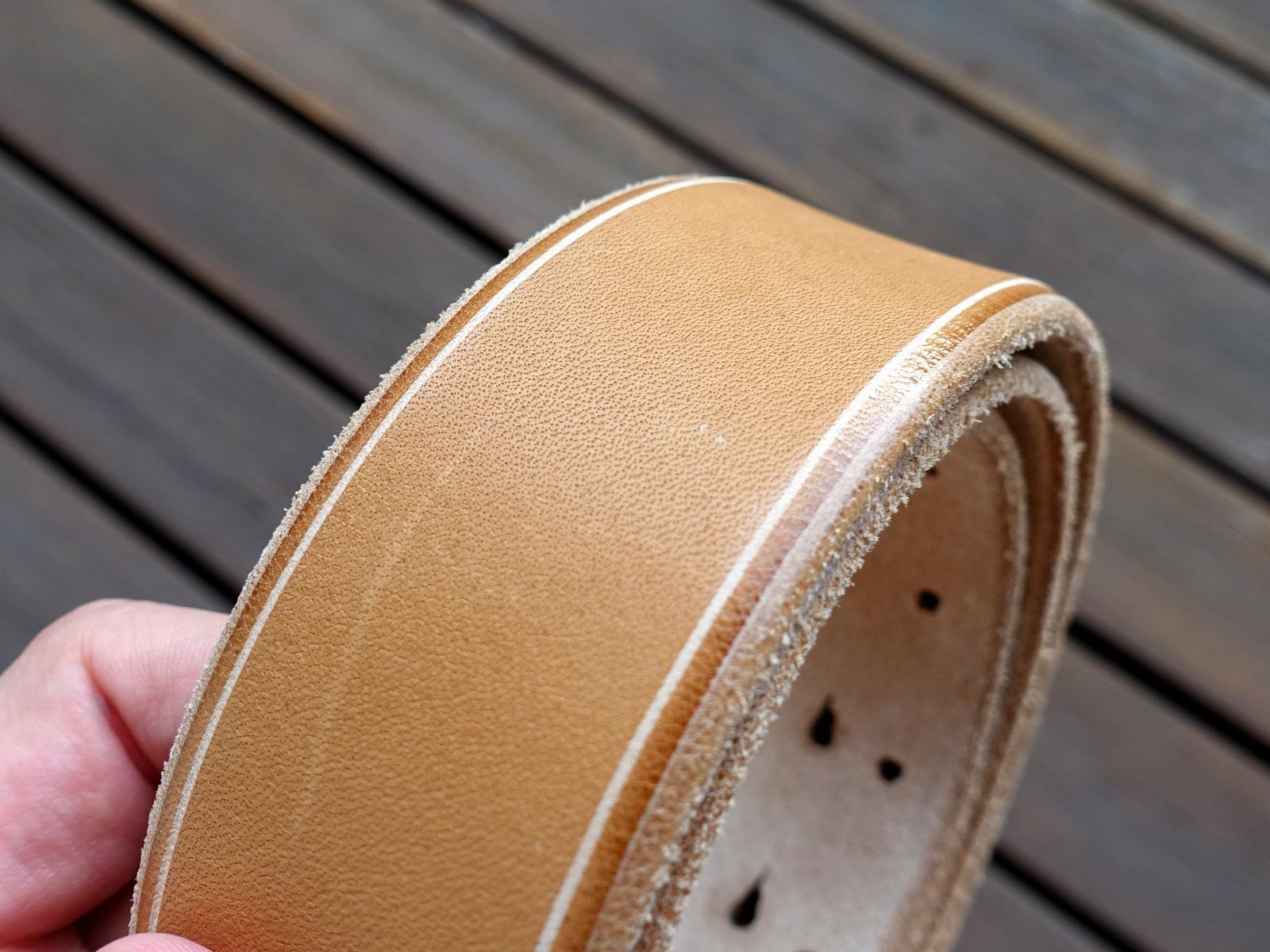 So, this leather that you see on the Punjab belt spends at least one year in the tannin pits – far longer than any other vegetable tanned leather, which usually spends only 2 to 6 weeks in tanning drums. There is no acute physical disturbance or heavy chemical agitation, unlike modern vegetable drum-tannage, and the resulting leather is closer to natural perfection than any other.

Usually, then, the leathers are immersed in a combination of tallow and fish oils – the exact recipes being the trade secrets of tanneries and curriers (leather dressers) – and subsequently ‘set’, increasing the density of the leather and smoothing the grain.

Variations & additions to this basic process produce England’s famous bridle leathers. The natural oak bark leather featured …… does not go through this bridle finishing process (currying and setting), and remains as natural as can be, a treat for the leather purist. 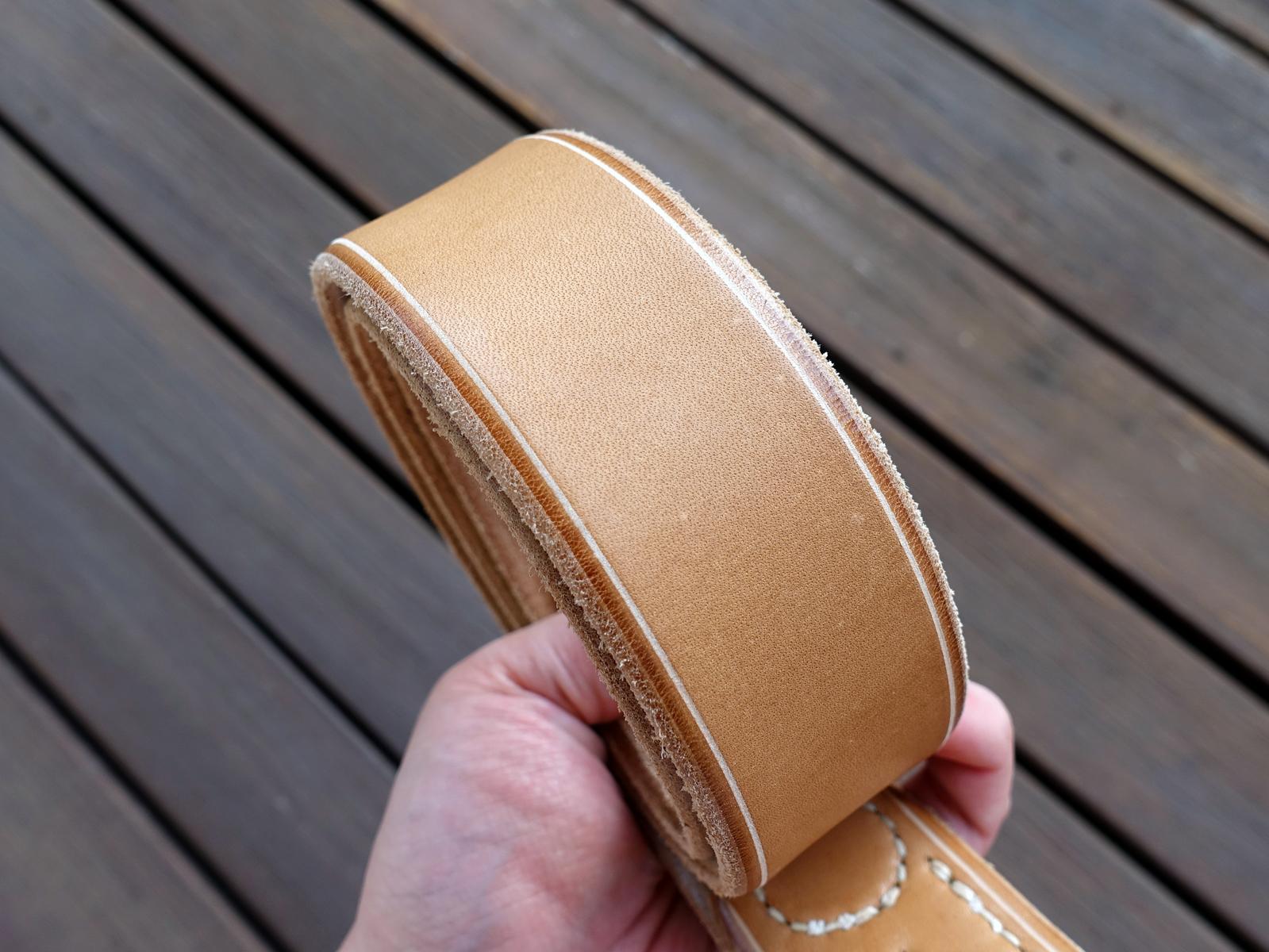 Sure, there are other pit-tanning operations around the world, yet they mostly utilize tannin concentrates and powders nowadays, and the duration of tanning could be as little as one month.

No other tannage is as considered or lengthy as Baker’s tannage. 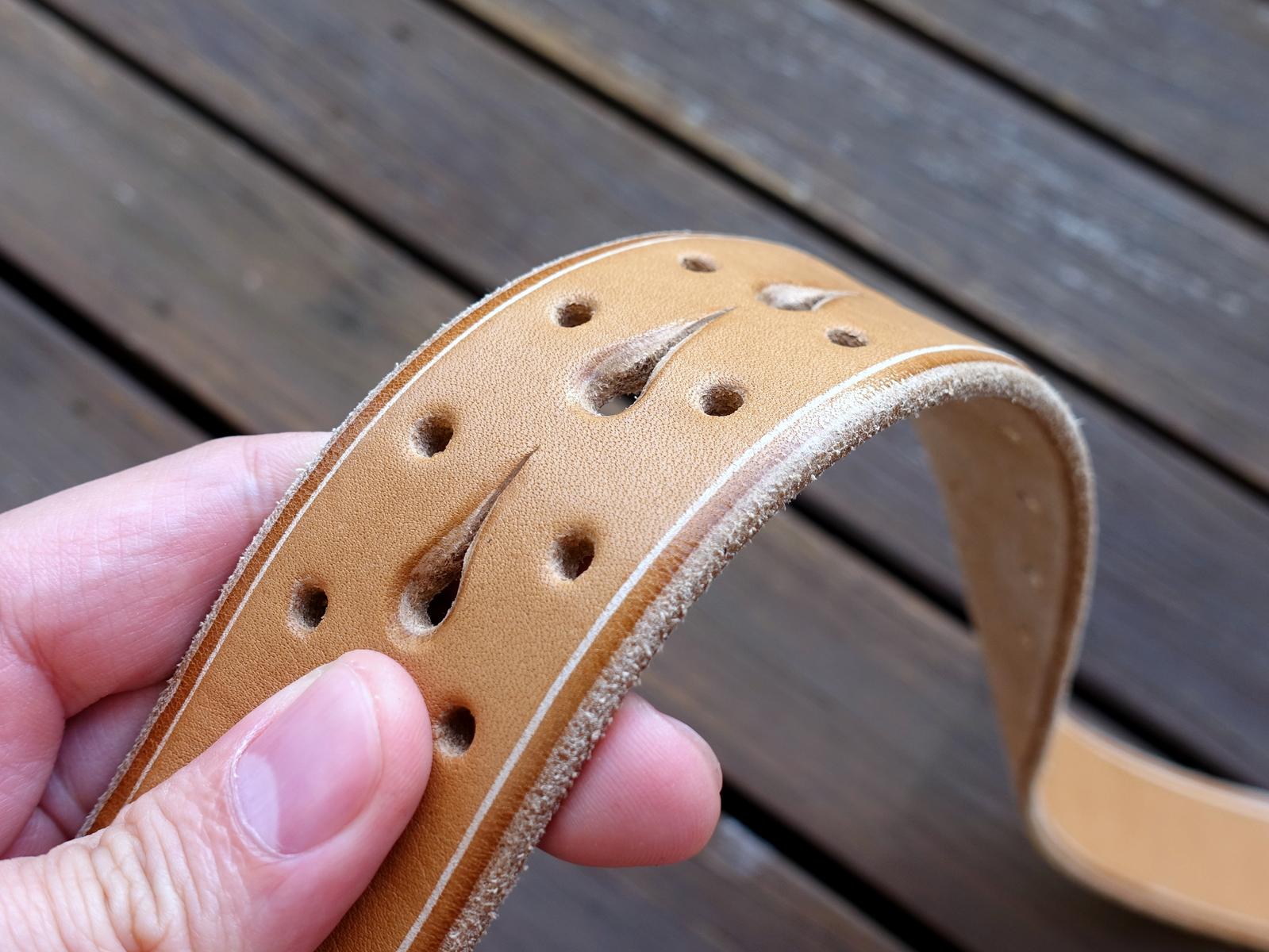 Unlike shell cordovan or other English bridle leathers, Baker’s bridle does not require excessive post-tannage processing or currying to impart the required strength and flexibility – the foundation of the leather, it’s tannage, is simply superior.

Without excessive processing then, Baker’s oak bark leather retains all the natural characteristics of leather – the scars, the pores, the textures.

This is leather at its purest, and in my opinion, the oak bark grain is so much more beautiful compared to the glossy & uniform surfaces of what are considered to be high end leathers these days. 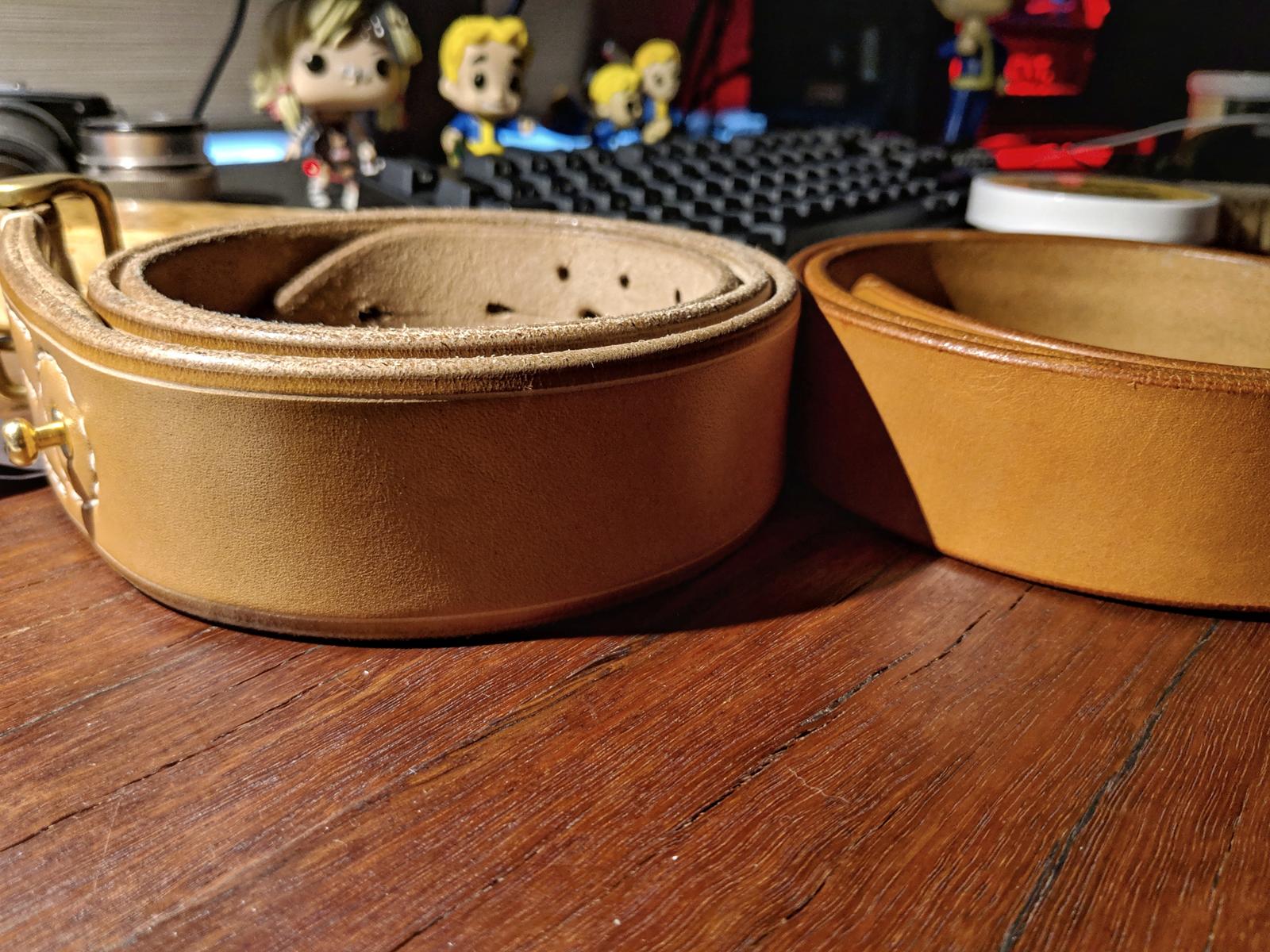 I really believe there is no cattlehide leather which can compare with Baker’s oak bark bridle in terms of toughness, density, flexibility and grain growth… it is one of the last ‘old world’ leathers left in the world.”

Like with all of Tom’s belts, the Punjab is entirely handmade and time-intensive in its creation. 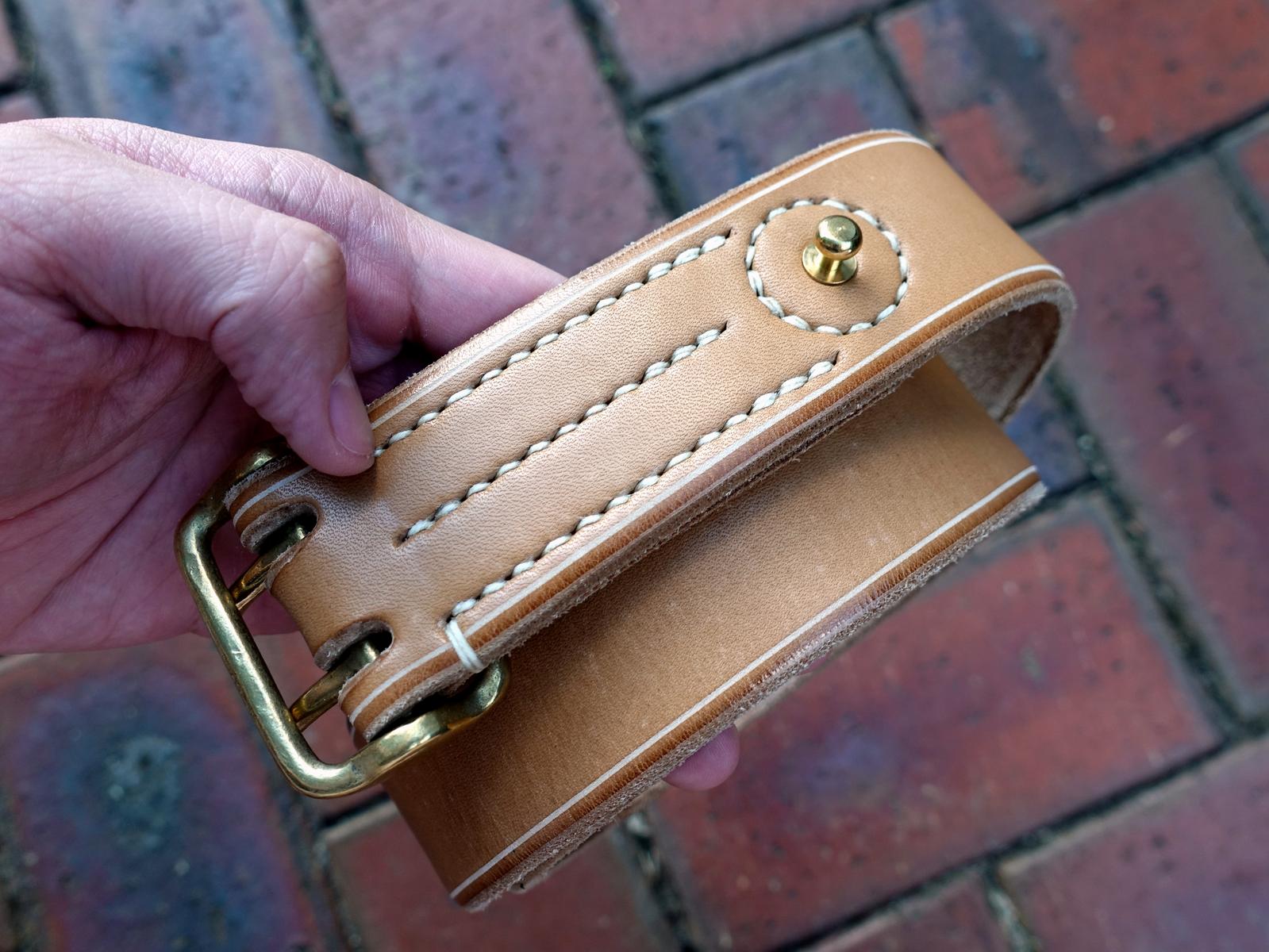 This natural version of the belt does not undergo Tom’s hand-staining process – the unfinished, russet version of the oak bark leather was used, as the natural strap is a suitable companion to denim. 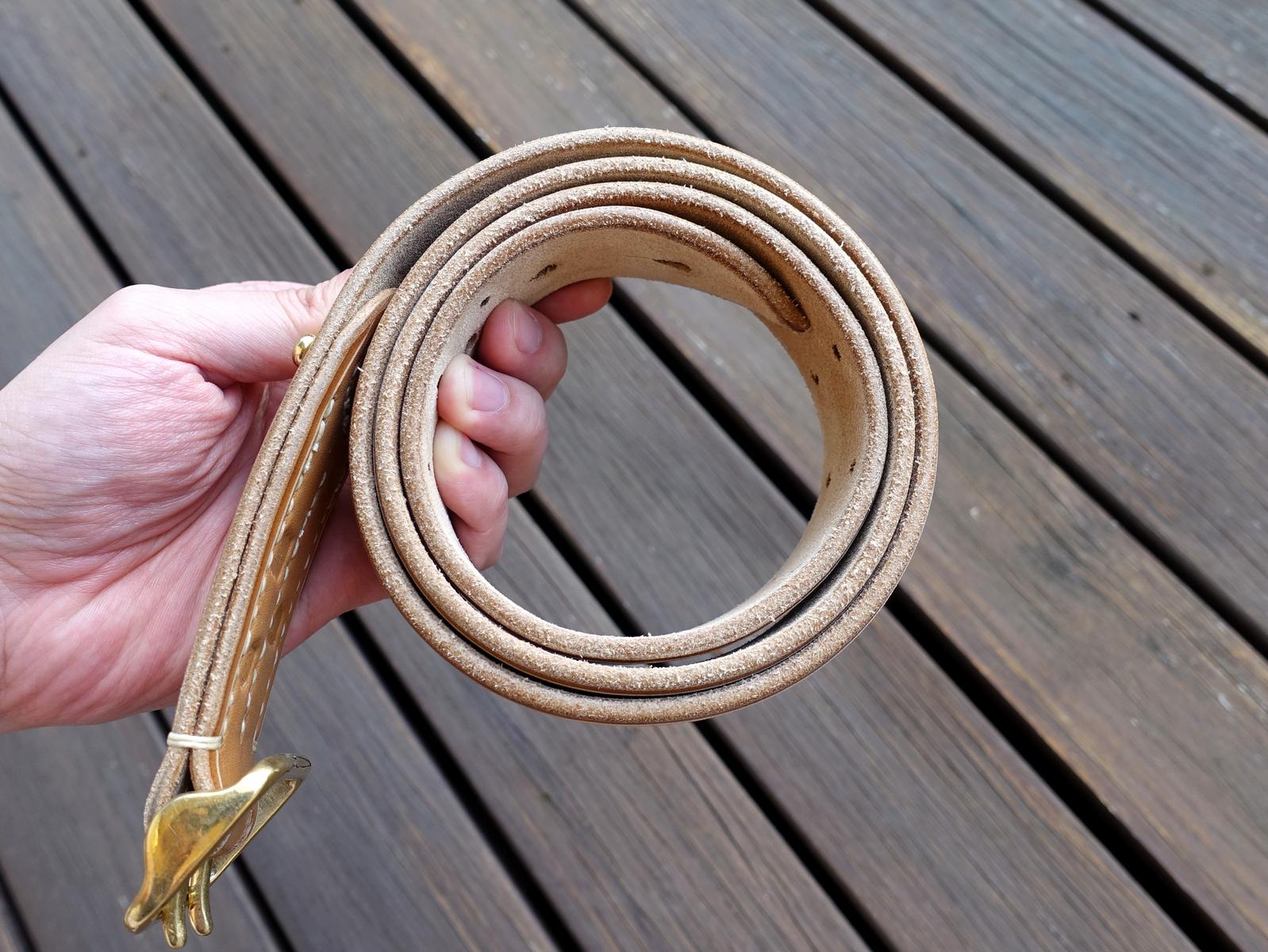 The strap is cut by hand. 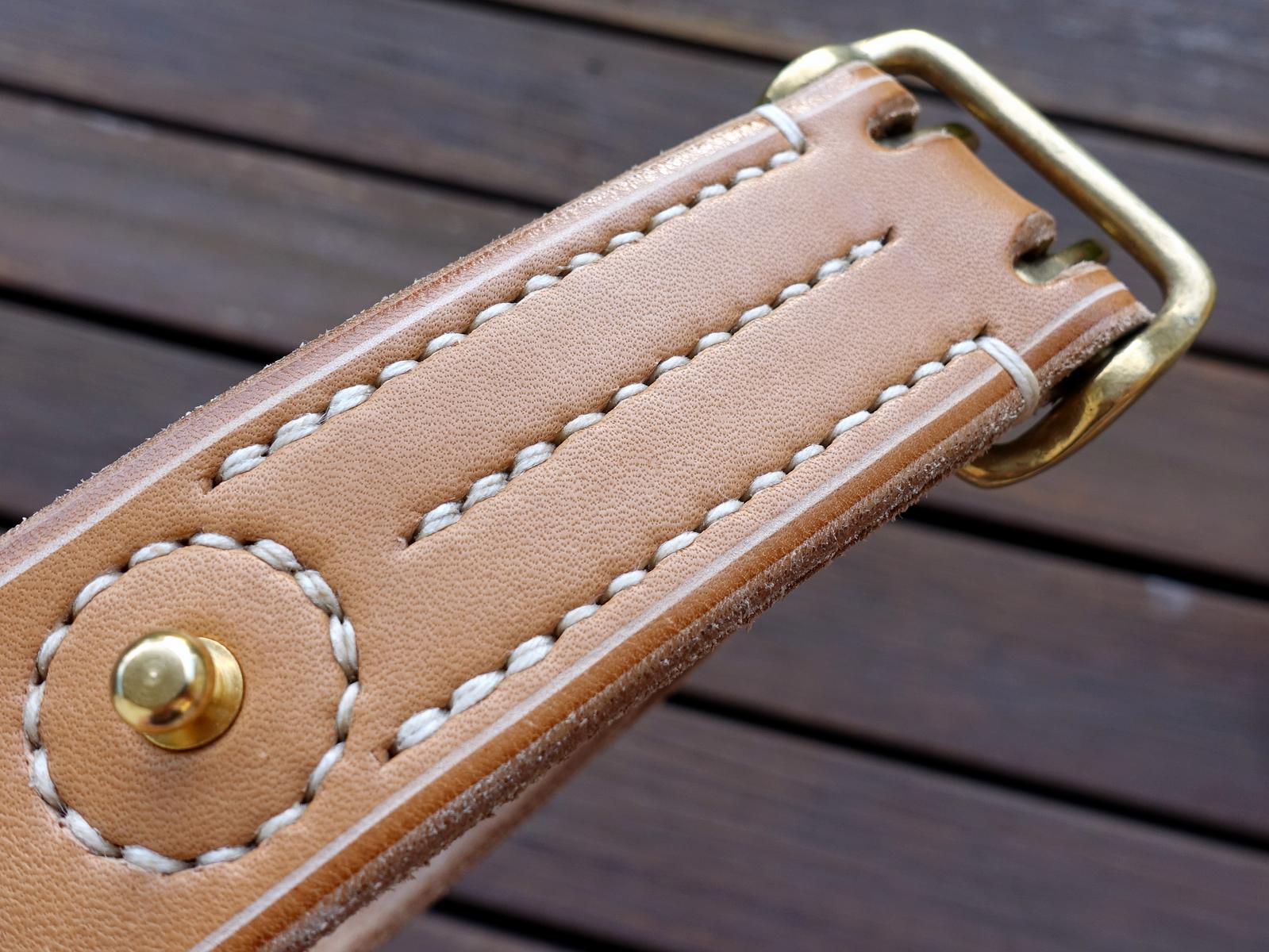 The buckle is solid brass, doubled-pronged; rugged but not overly heavy. 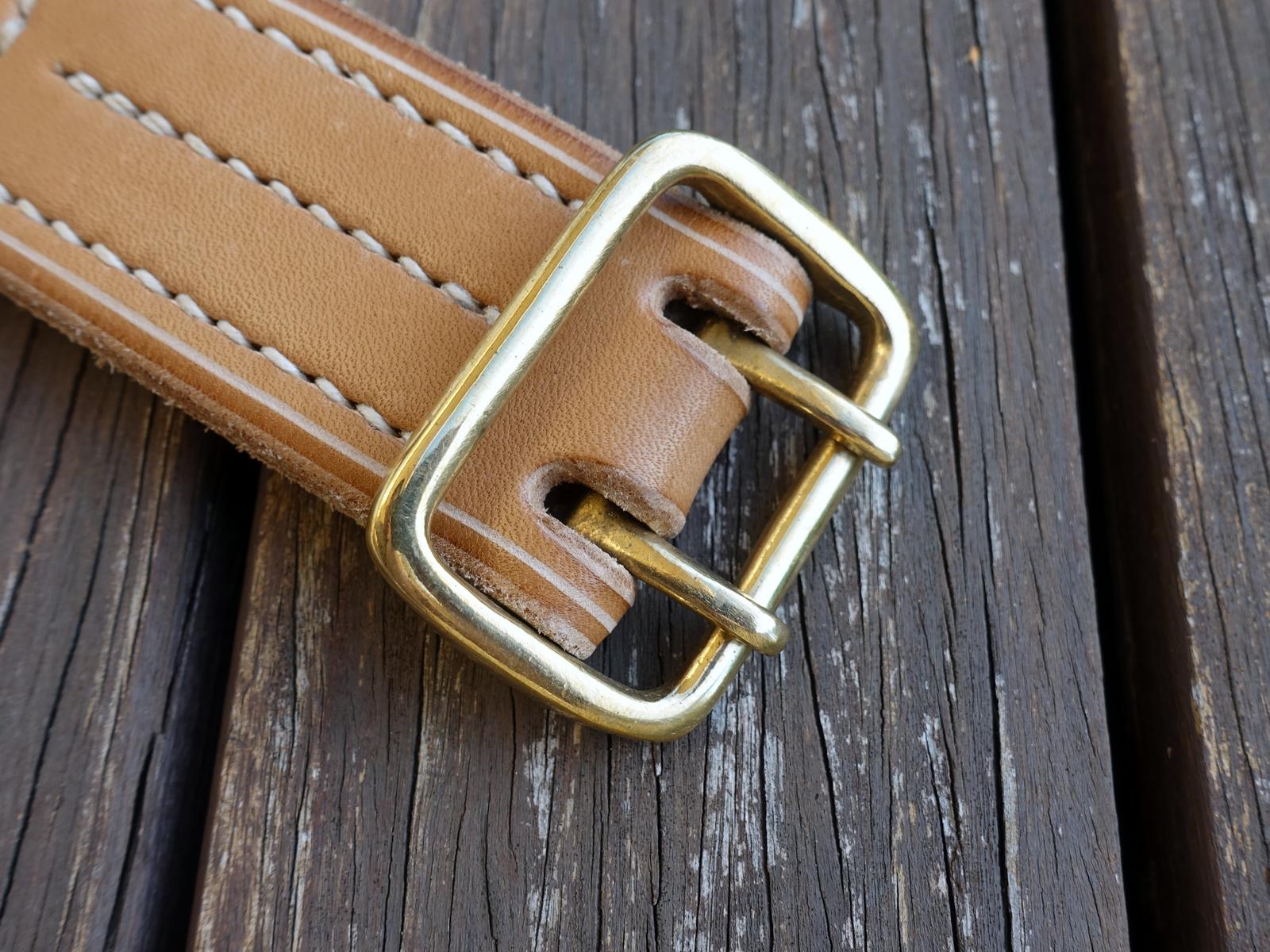 The fold and the stud attachment are hand sewn with saddle-stitch. 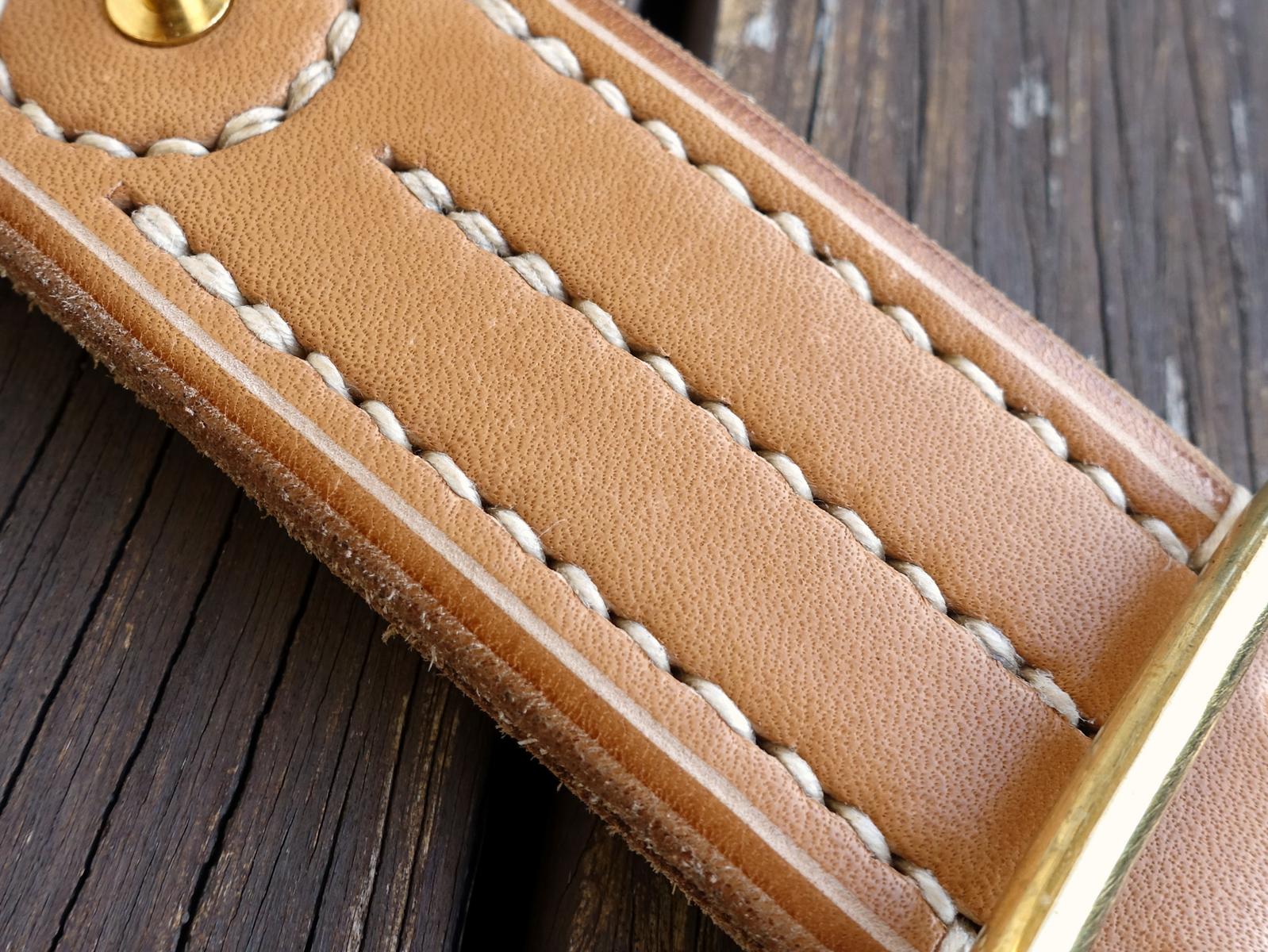 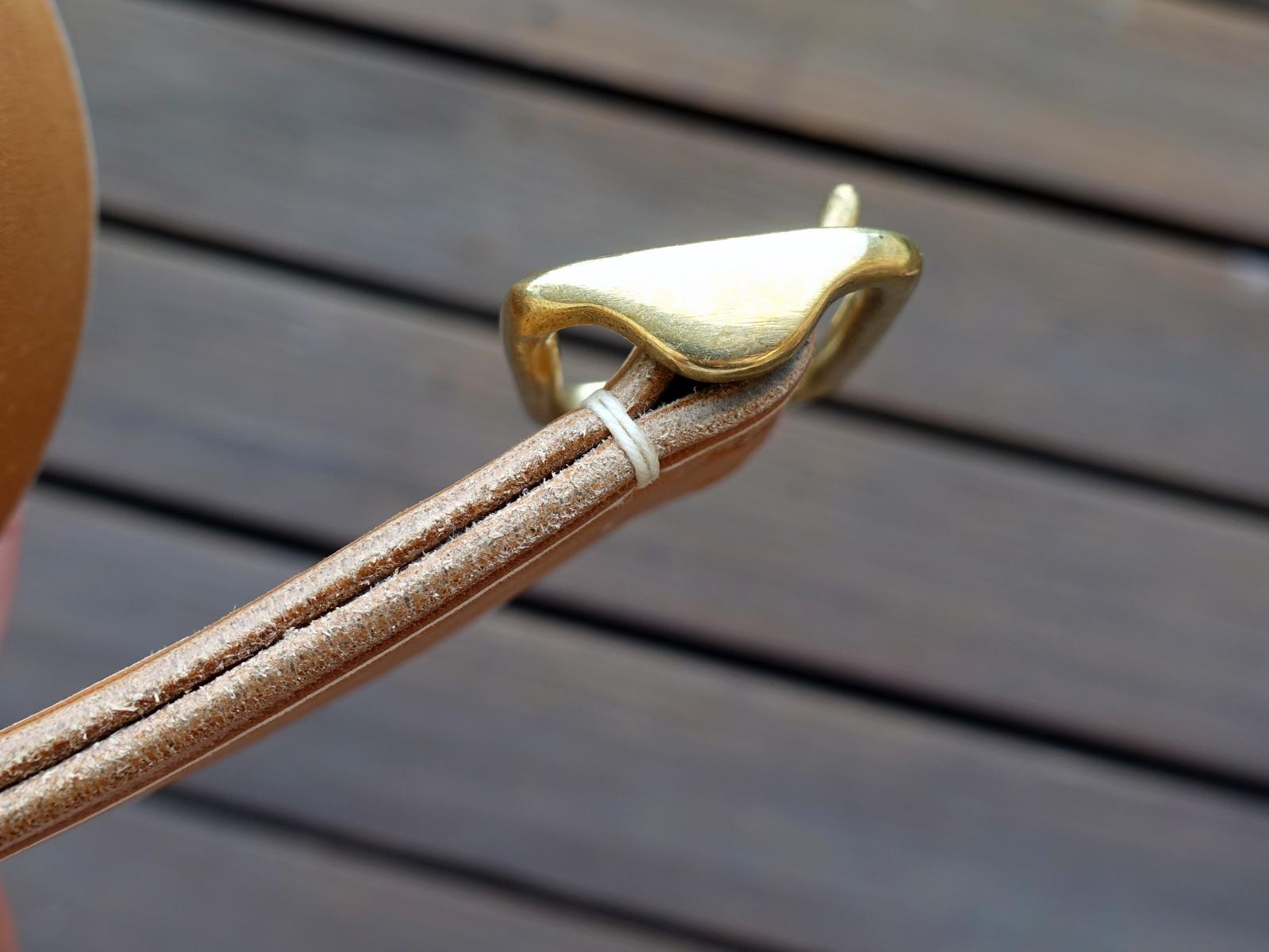 The back of the buckle fold features three stamps, symbolising the maker (Tom of Hawkmoth), the place of origin (Sussex windmills) and the year of creation (2019). 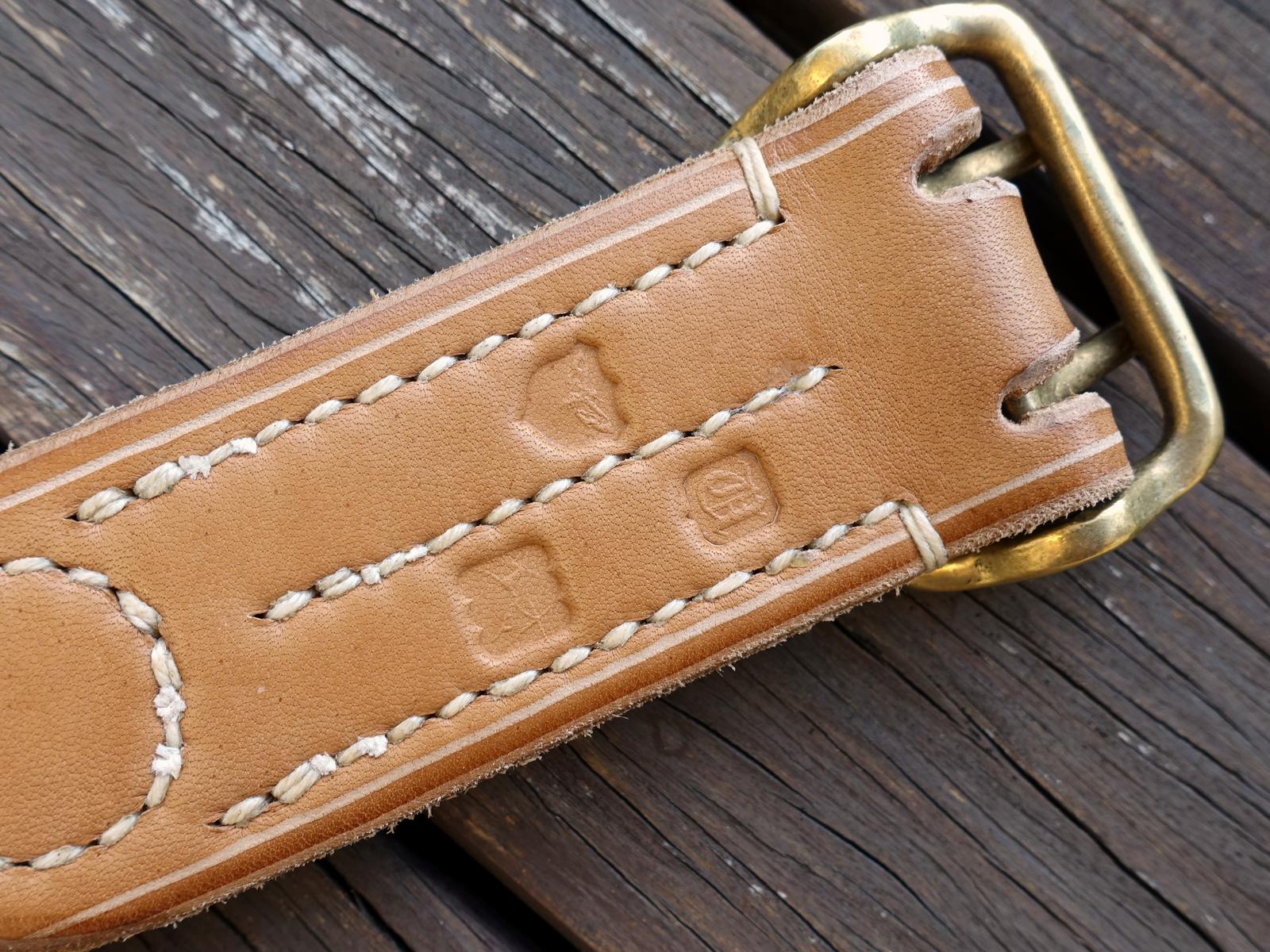 Waxed linen thread is used, sewn into grooves so that the threads sit parallel to the grain of the leather. 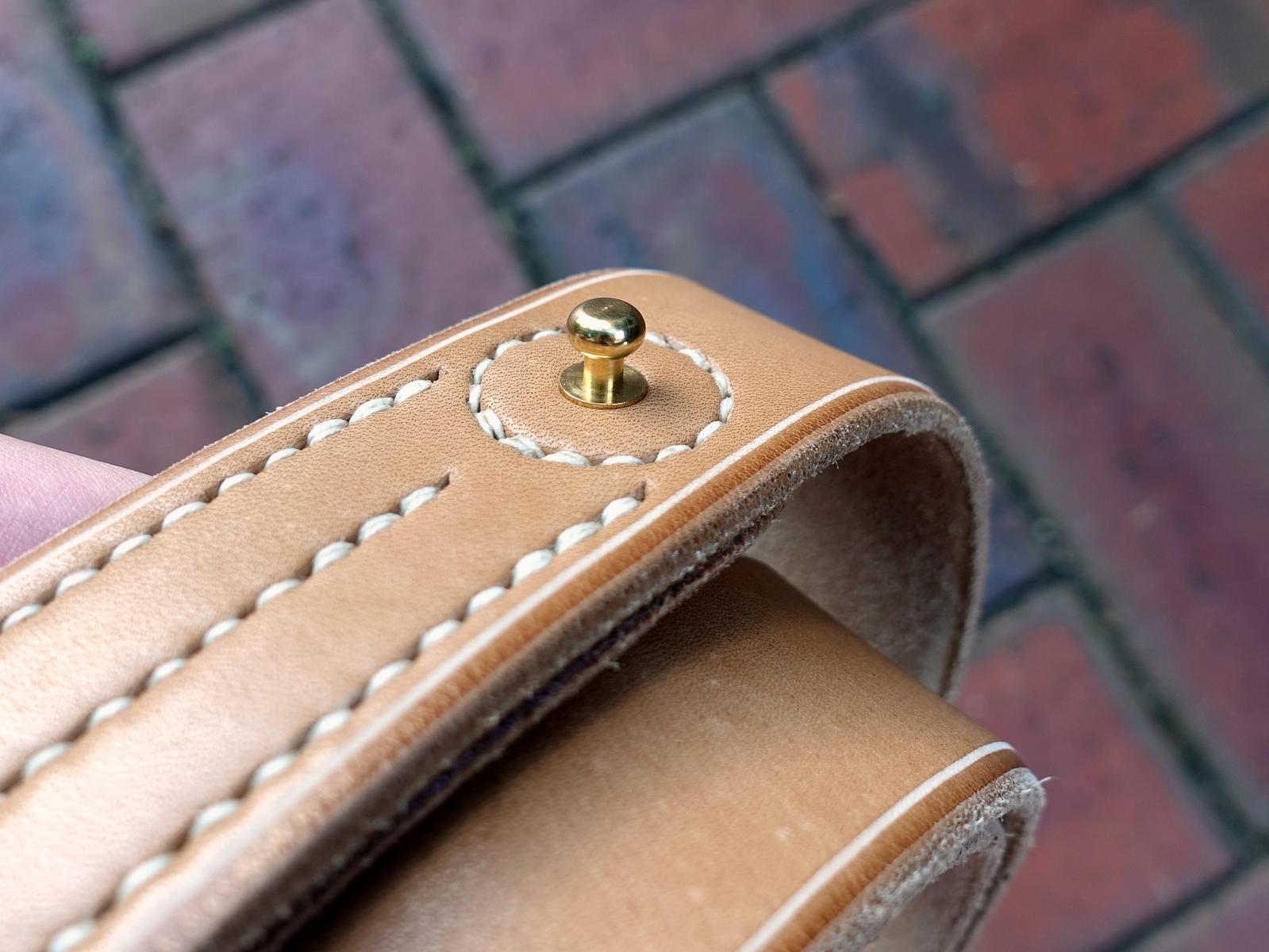 The prong and stud holes are hand-punched and also burnished. 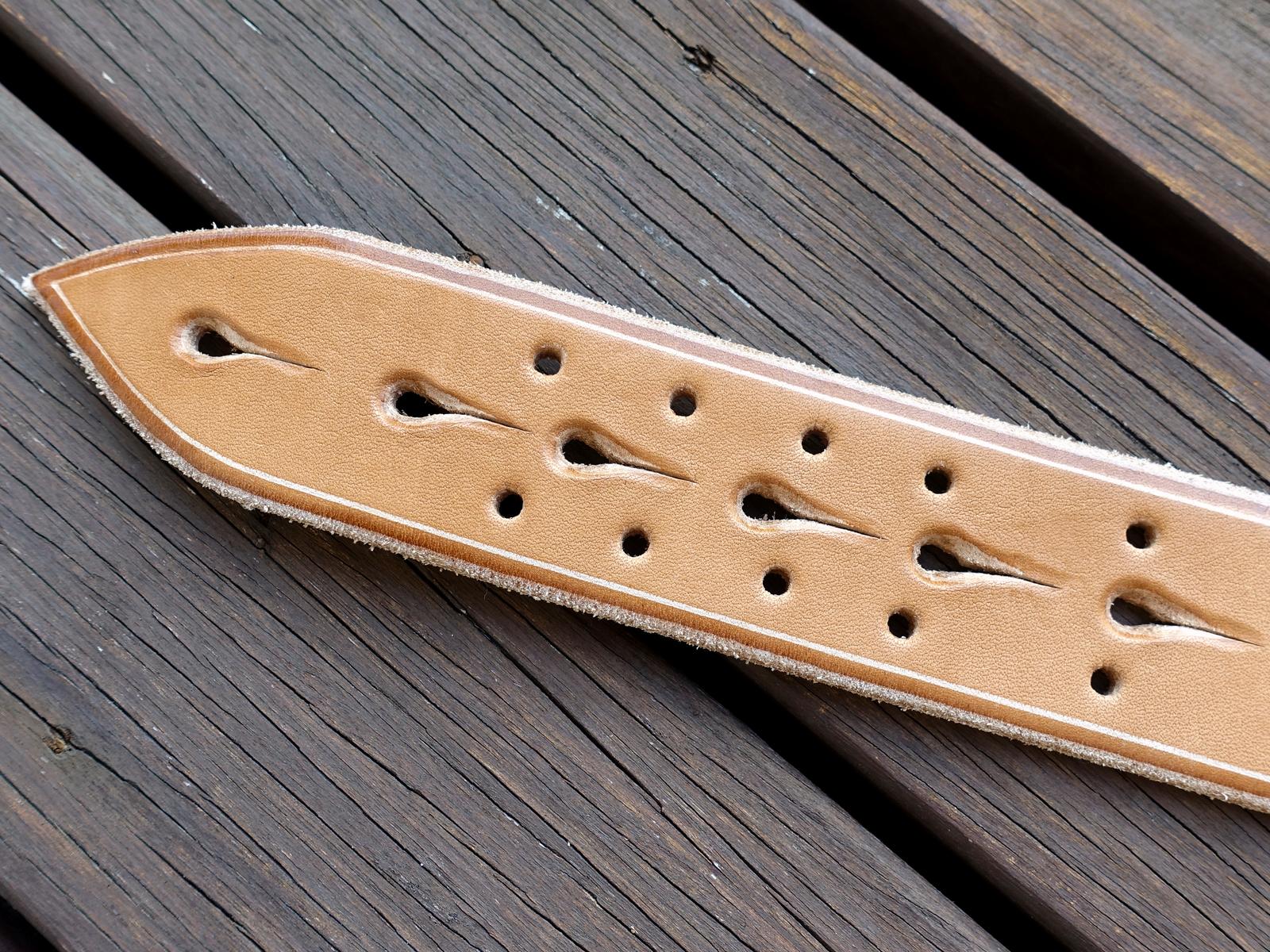 A border has been cut along the edge, creating a framing groove. 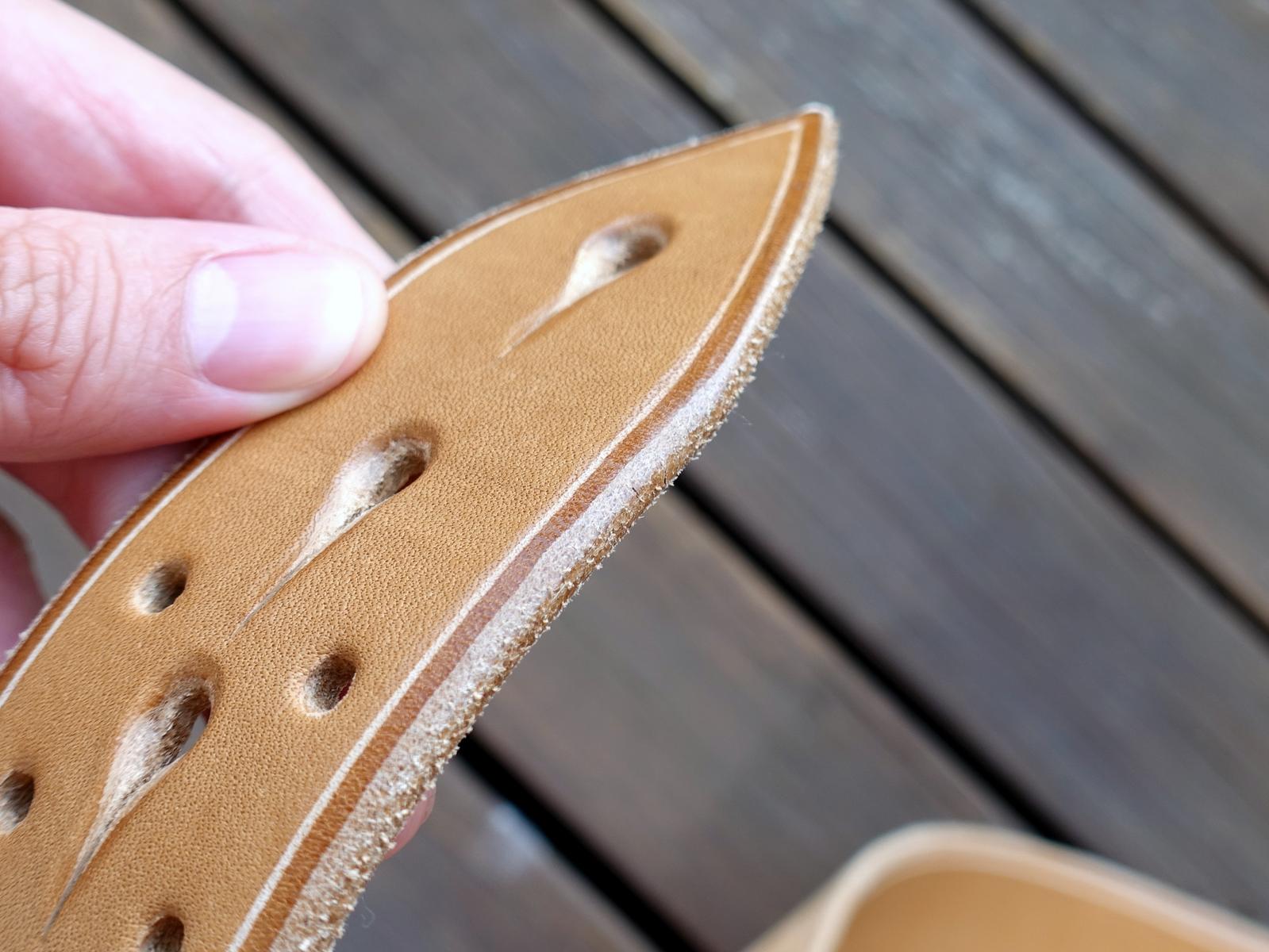 The back of the leather has a rougher feel, and the nation of origin cleared marked. 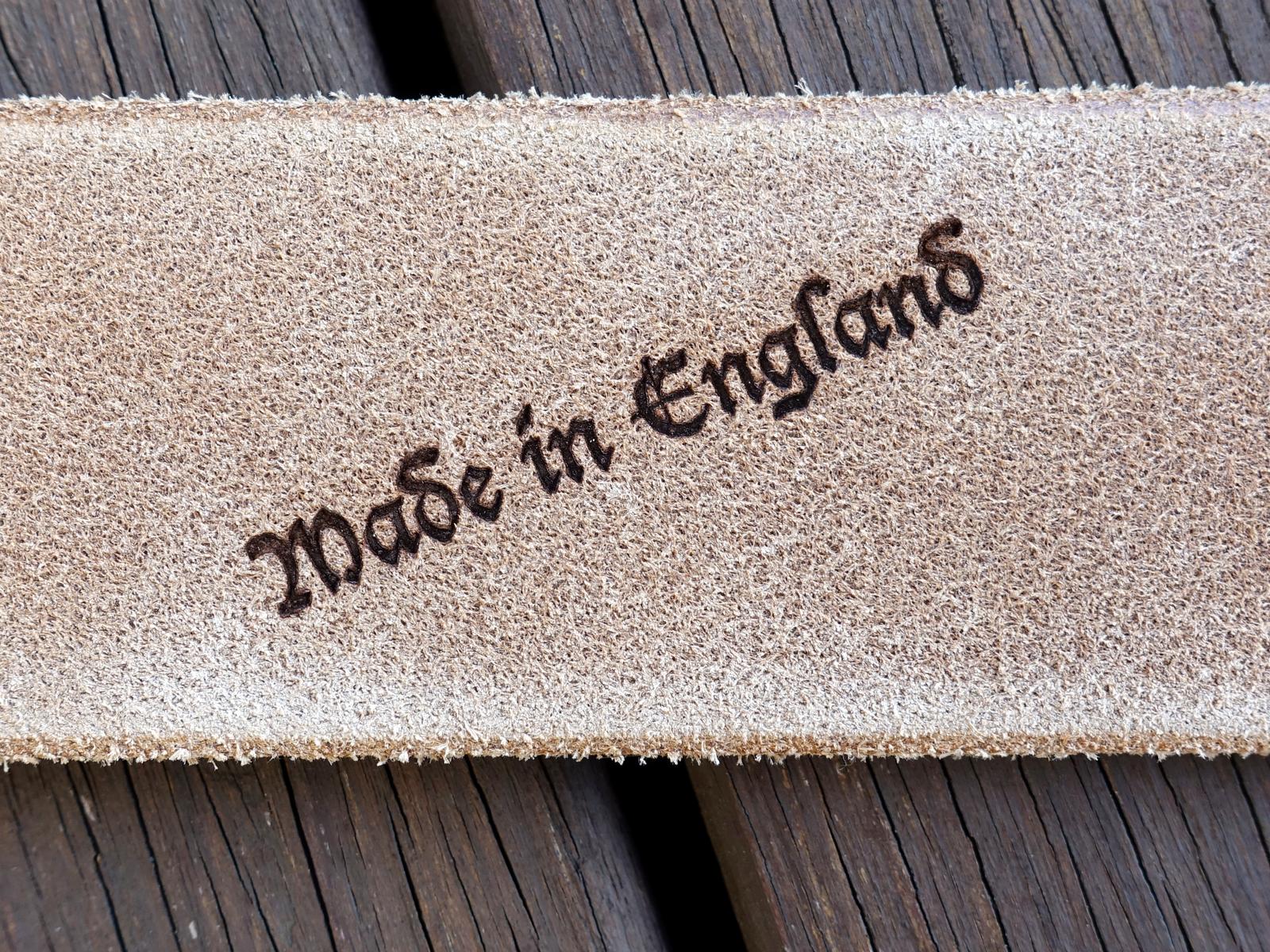 The edges, of interest, are hand-burnished with water. 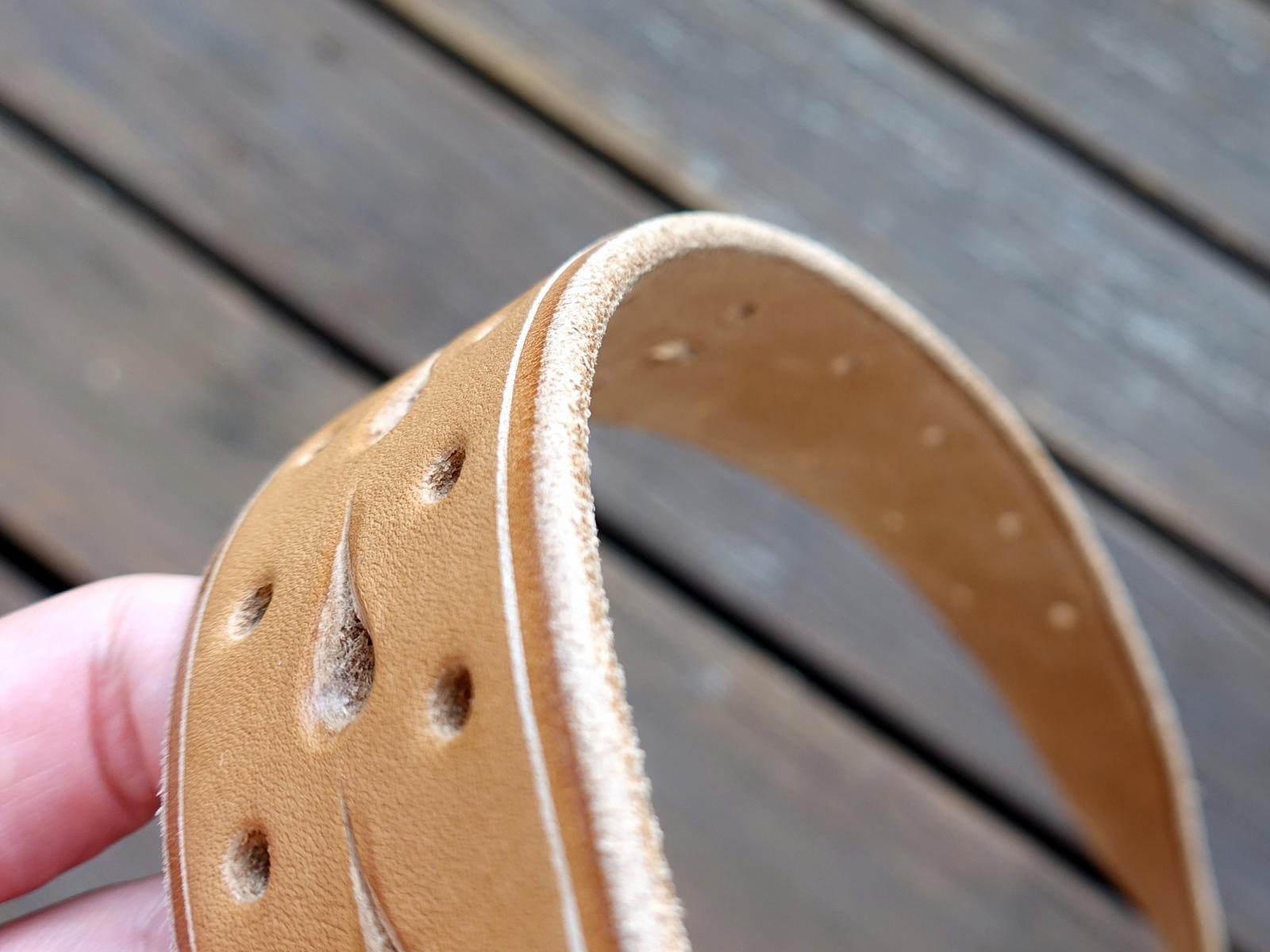 This results in a harder but fluffier appearance compared to the more common gum and wax burnishes we usually see on hand-made belts.

I must begin by acknowledging that, in terms of the design aspect of belting, my Hawkmoth Leather Co. belts are the most complex and impactful among my collection of dozens. Often, so called craft belts would either be much too generic – think the plain strap with Chicago screws – or overly reliant on leather or hardware to make an impression. 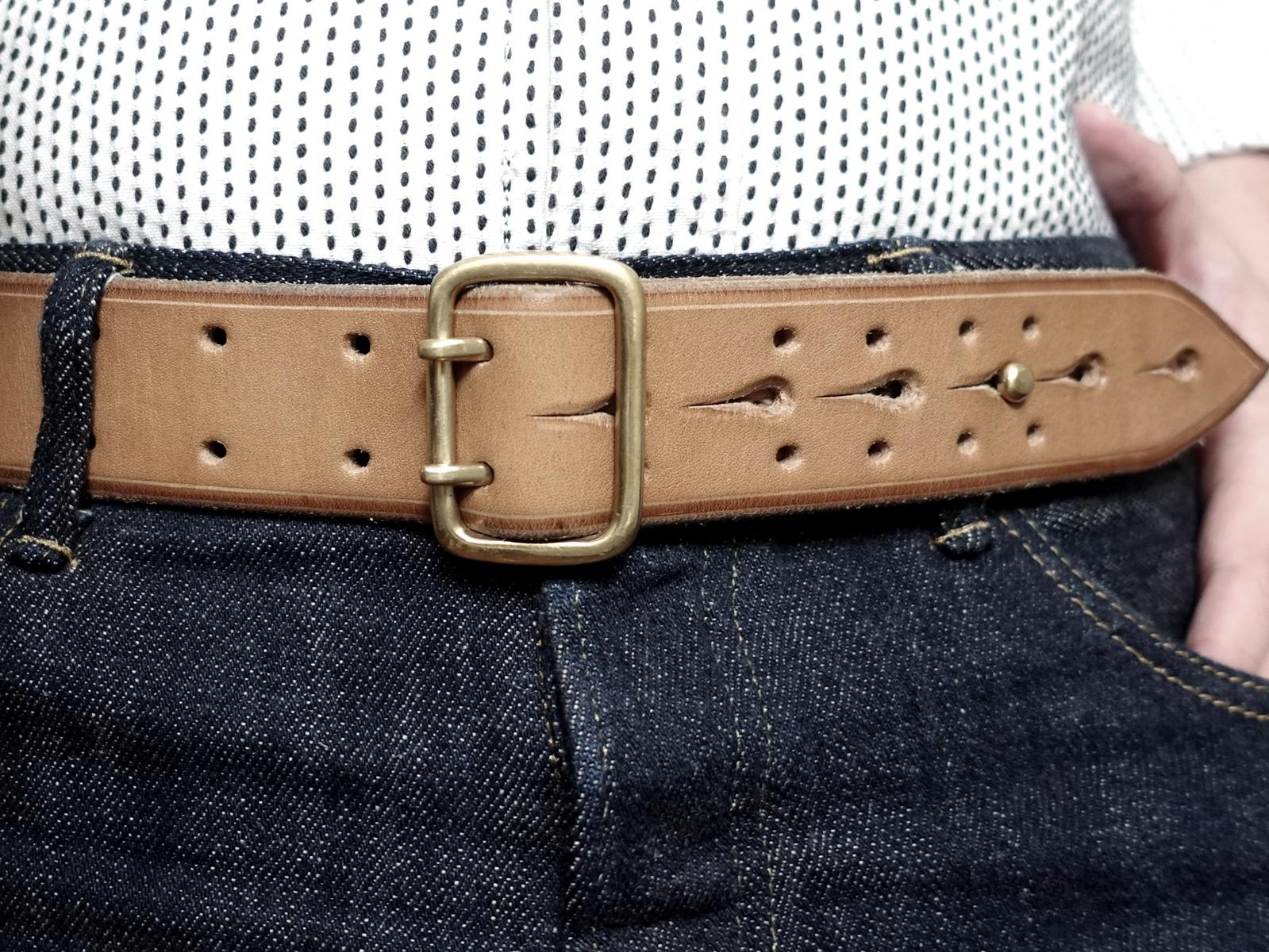 With this Punjab belt, Tom has knocked it out of the park with a real statement belt – a strap that can very well be the main character in an outfit, rather than being a simple complement to Japanese denim.

Being an offspring of the Sam Browne belt, the Punjab would work well with any work-wear or military-inspired fabrics and pants. This includes denim jeans or military twill chinos. 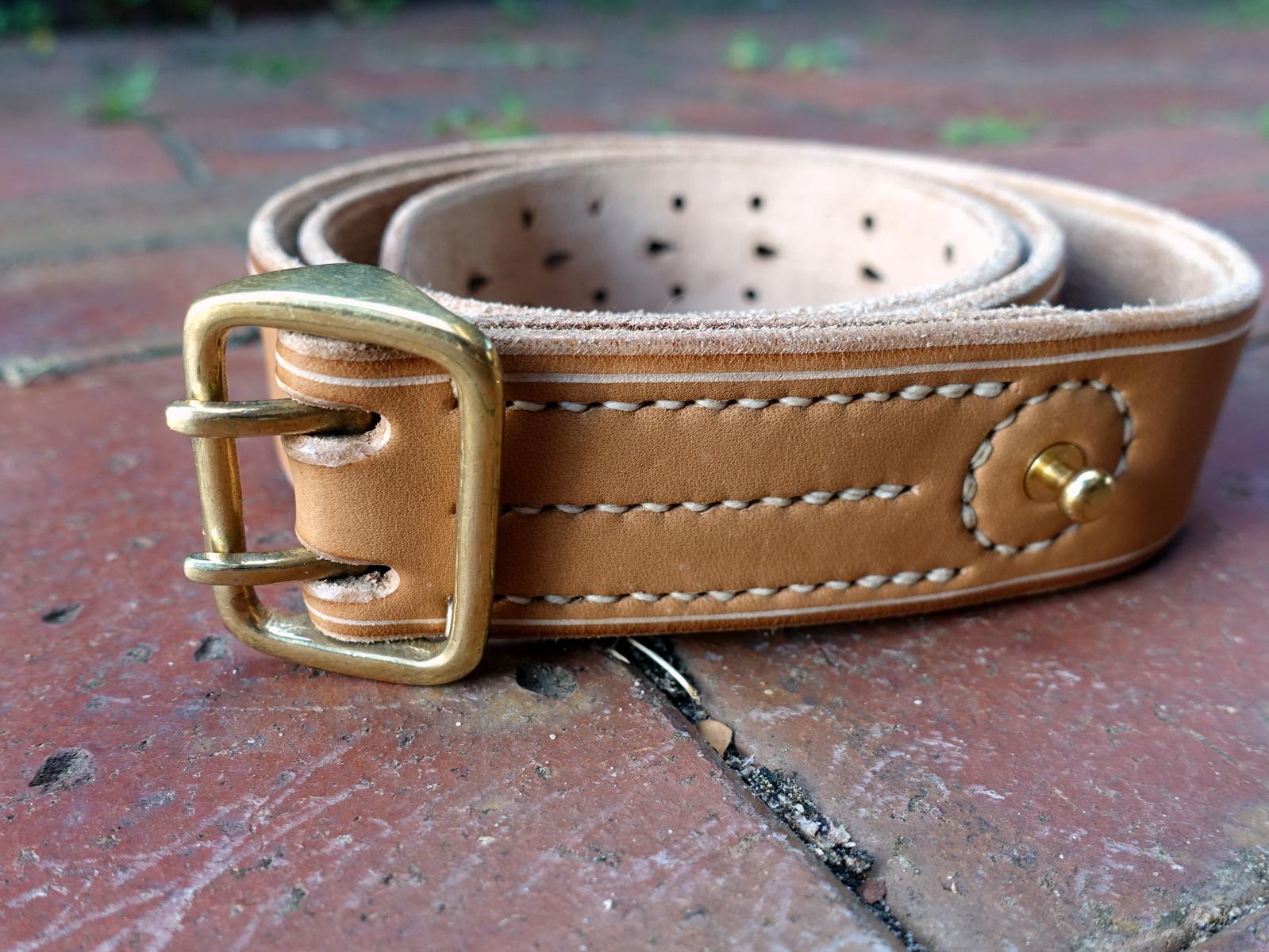 The superior aesthetics and detailing of the Punjab really helps it stand out – indeed, there is no mistaking a Hawkmoth Leather Co. belt with one from another craftsman, and it is easy to see why Eastman Leather has included the Punjab in their ELMC line, despite the design of the belt not being directly related to American motorcycle culture.

In particular, I really enjoy how the belt seems to frame itself, an effect created by the cut edge groove and the water burnish. Also, whilst worn, the area of the strap extending from the buckle to the tip really becomes a visual focus, adding much flavor to any outfit. You might notice in some of the photos here I’ve only passed the strap through the buckle once – I find this alternative way of wearing the Punjab really shows it off.

Tom’s former work as a film costume designer has really rubbed off on his line of belts, it seems. 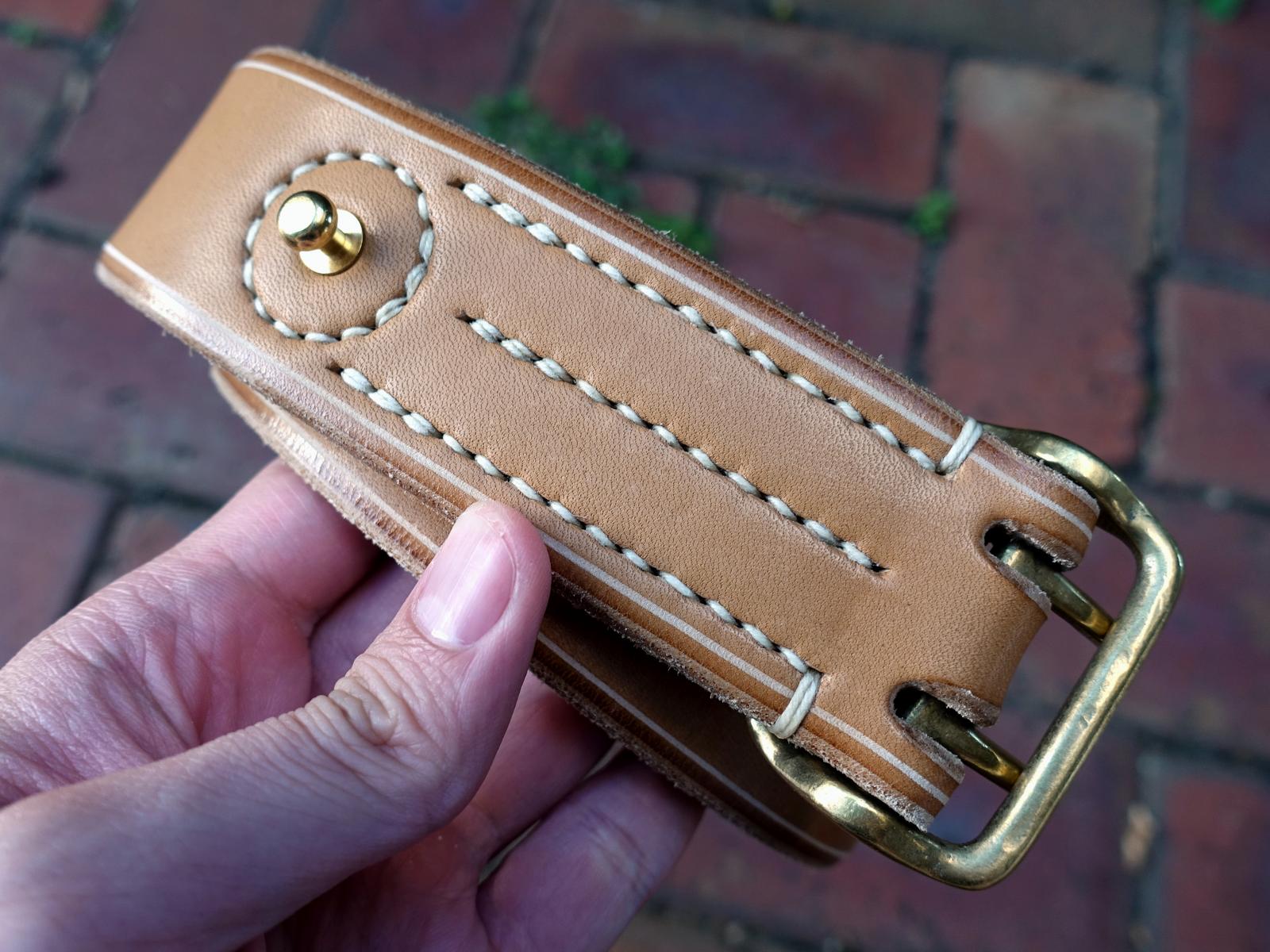 Tom has mostly utilised Baker’s oak bark bridle leather for Hawkmoth products, and I share a similar love for this very special leather. To me, oak bark bridle is the very best cattle-hide leather being regularly tanned in the modern age – there are few places left on Earth that continue to utilise either bark tannage or pit-tannage, and no other tannery will tan their leathers for anywhere near as long as Baker’s does (at least one year).

No amount of extra hand-processing, as seen on shell cordovan or Italian veg tans, can overcome the fundamentally superior tannage of this British leather. Of all the leathers tanned in the European tradition, Baker’s tannage is the closest to leather purity, and if I had to choose only one type of leather to wear for the rest of my life, Baker’s English oak bark tanned leather would be the one. 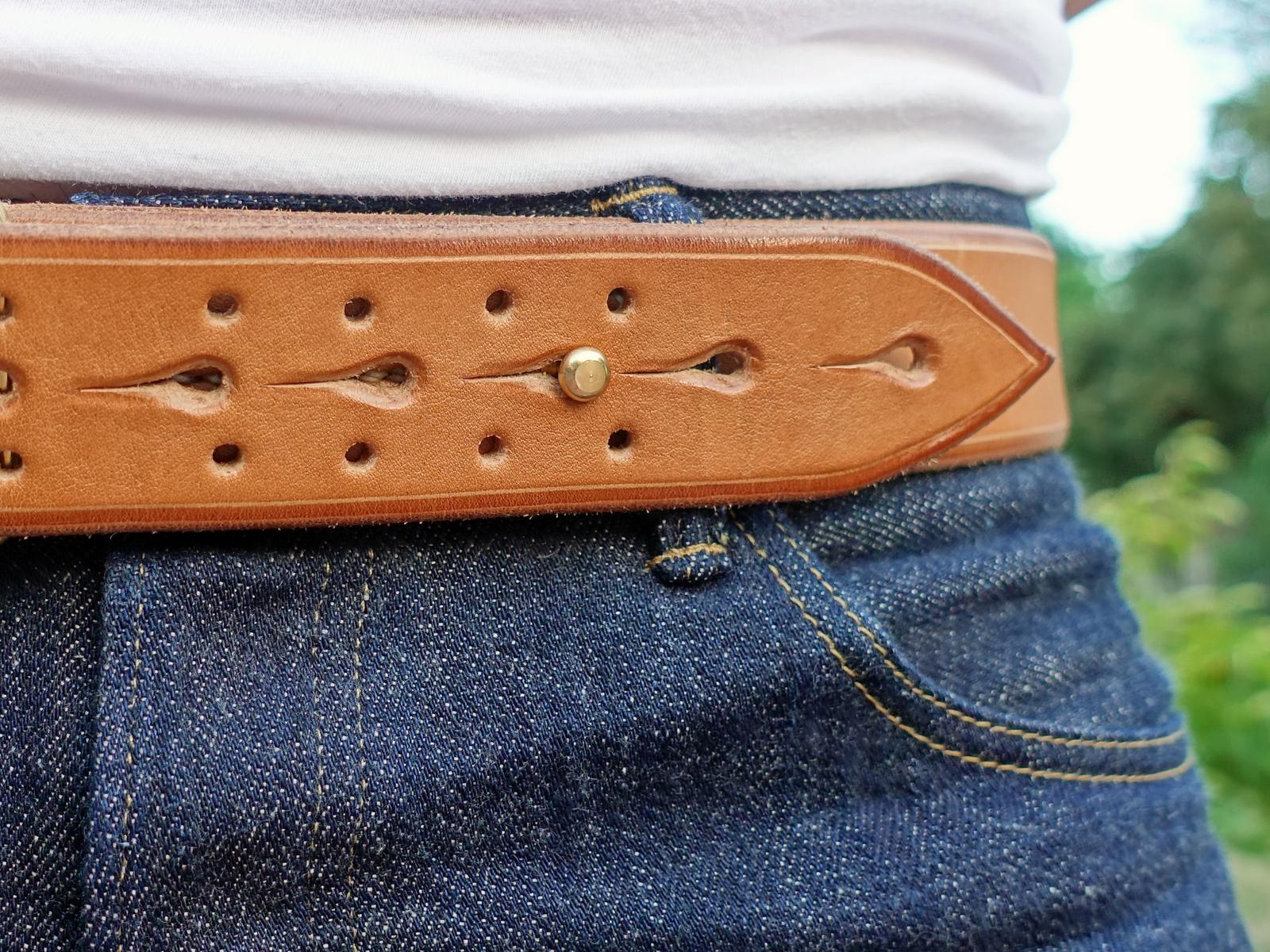 This customised version of the Punjab works very well with raw denim – the white linen threads & natural leather will allow for complementary patina development. That’s not to say the regular stained versions of the Punjab or the ELMC exclusives with the olive threads won’t work well, and yet, for a denim head, there is nothing quite like DIY leather evolution.

Tom’s hand-craft on this belt remains as neat as ever. The saddle stitching near the fold is extensive and well executed. The placement of the buckle and stud is solid and centred. The arrangement and spacing of the elaborate system of holes is, perhaps, busy but neat and aesthetically pleasing. 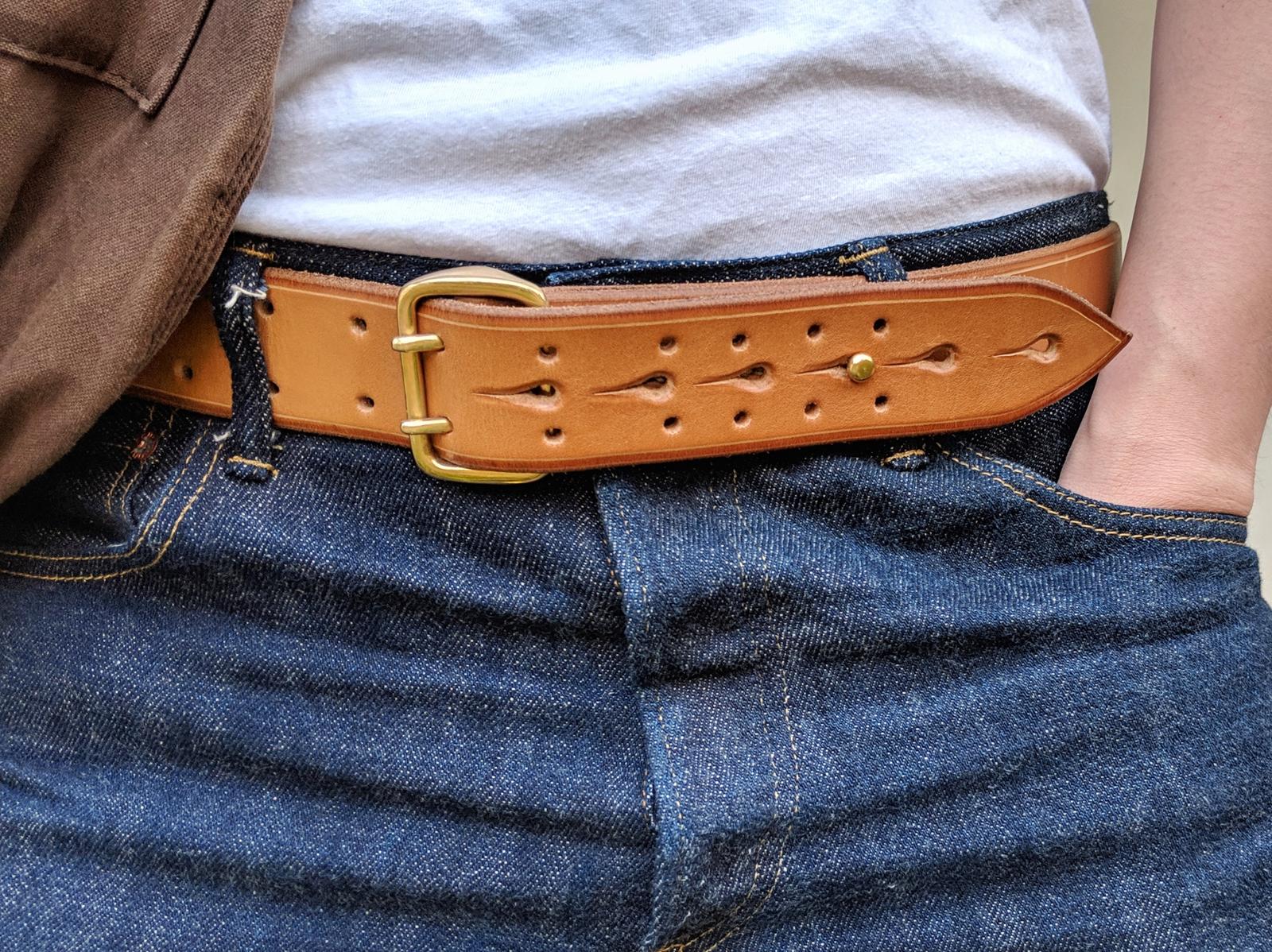 Tom’s waxed linen saddle-stitch, in particular, is some of the nicest work I’ve seen since my belt projects with Terry Dear and Equus Leather almost a decade ago. Once you’ve experience this calibre of British belting, a strap which is screwed together can hardly be considered hand-made.

I know that leather belts are considered to be great money makers for most workshops, being not only cost effective but also time efficient in their making… and yet, if you’ve handled one of Tom’s belts, it is clear that much time and effort are invested into each strap. The craftsmanship devoted to the Punjab is on a completely different tier compared with almost every other belt you might find at a craft market or on Instagram. 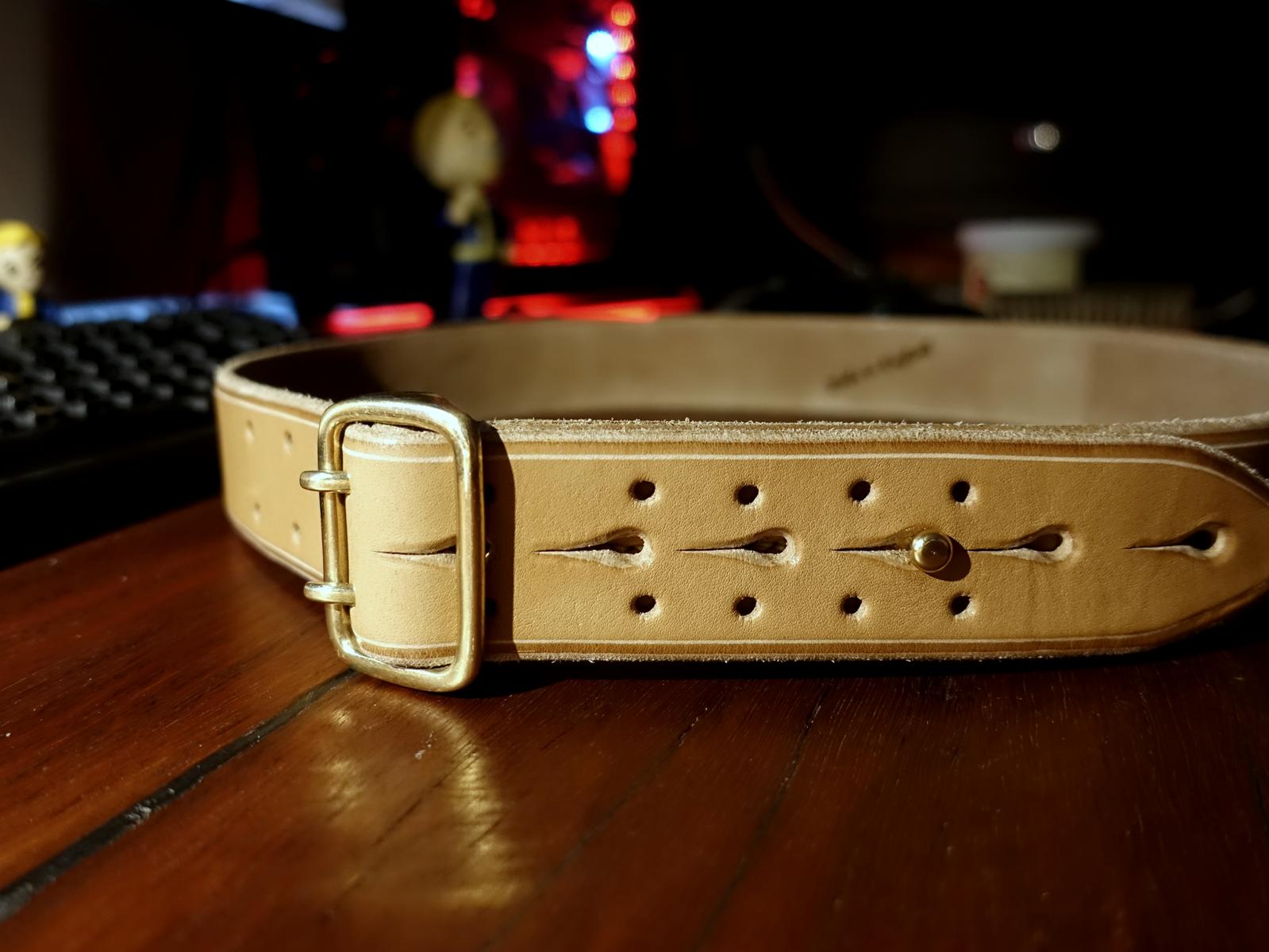 At 195 GBP, the Punjab is not the cheapest bench-made belt on the market, but certainly one of the very best, factoring in design, craftsmanship and materials. This is a fantastic statement belt for denim and work-wear fans, and short of a bejewelled or hand-tooled Western belt, one of the most visually striking straps you’ll see around. 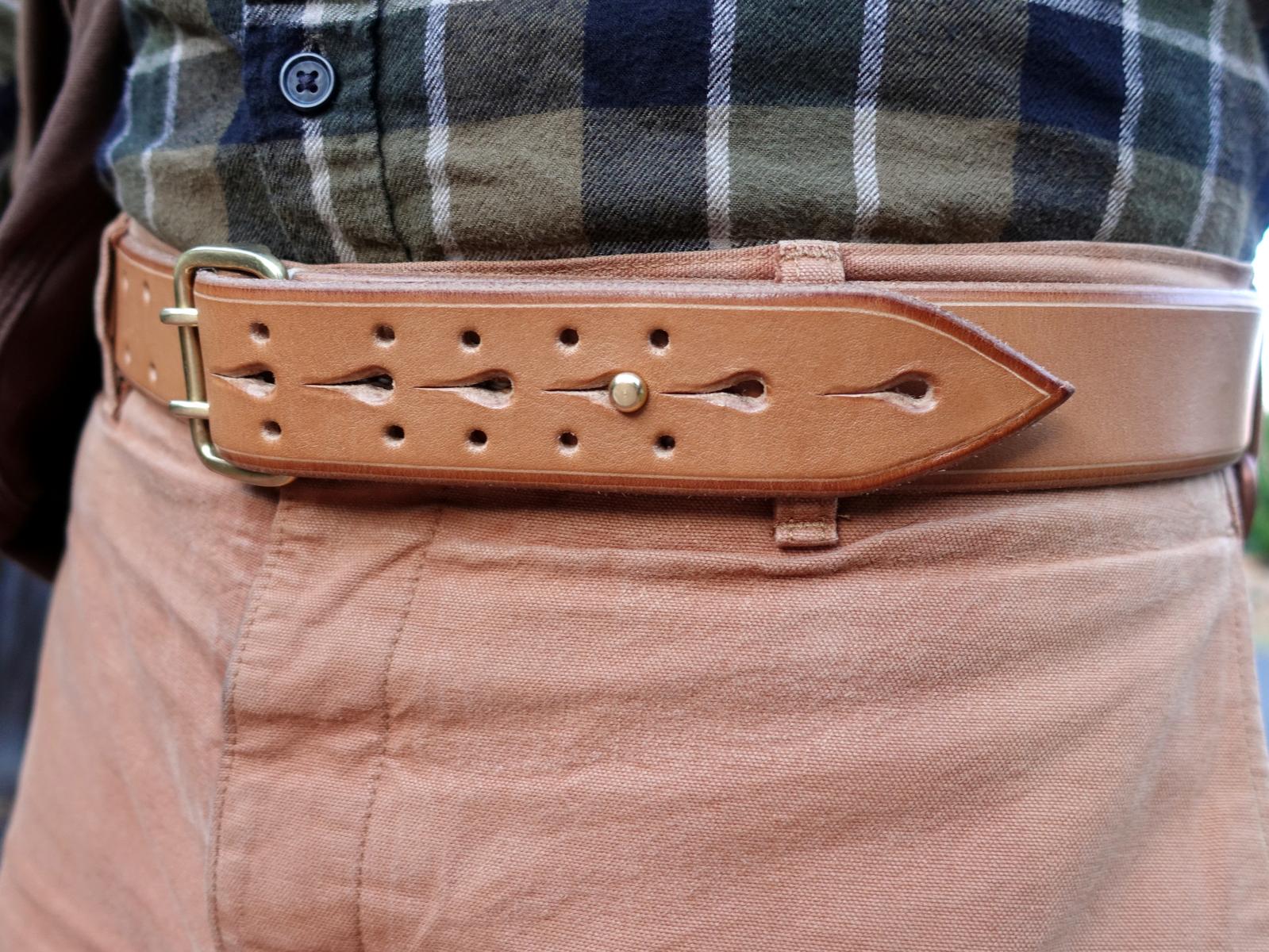 Most definitely head to the Hawkmoth Leather Co. website to see the Punjab belt, as well as Tom’s other designs.